The rise of the elites and the betrayal of the workers: Vavi’s next frontier? 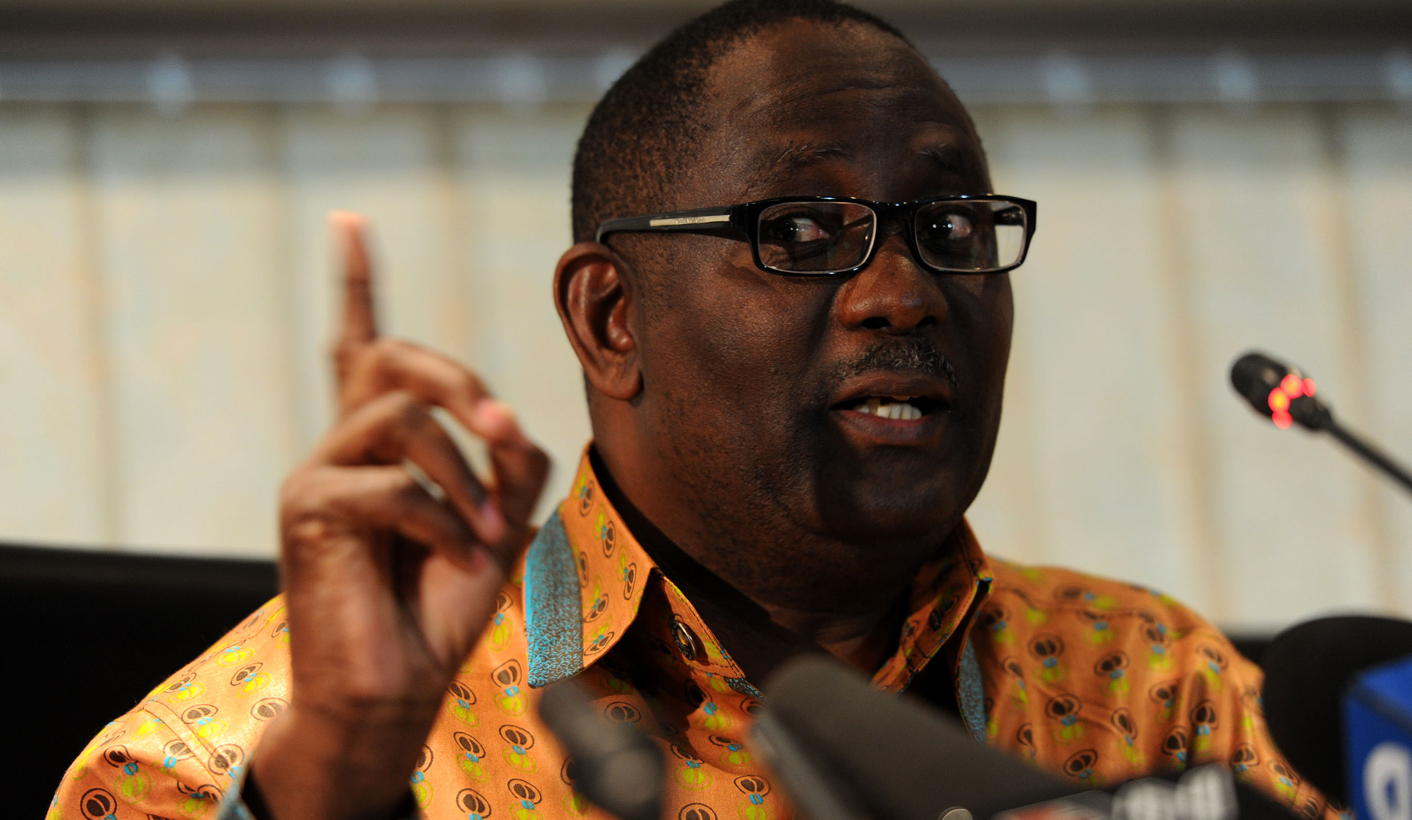 After dangling in the wind for five months, Zwelinzima Vavi is officially on a terminal collision course with the leadership of Cosatu. Vavi received a charge sheet from the trade union federation on Tuesday, following his suspension in August for sexual misconduct. Earlier on Tuesday, he delivered a speech that suggested he is finally seeing a role outside the ruling alliance. He diagnosed a growing phenomenon in South Africa: the dominance of the political elites and the shunning of workers’ interests. The time is coming for Vavi to make a decision – continue a fight he cannot win, or champion the movement he is himself defining. By RANJENI MUNUSAMY.

The reign of the elites in South Africa was most obvious at the one place it should not have been: Nelson Mandela’s funeral. The huge marquee constructed at Mandela’s home village of Qunu for his funeral service was the preserve of the political and business elite as well as socialites on the ANC and government’s VIP guest lists. Some of Mandela’s blood relatives and friends, as well as the people of Qunu, were not invited. Apart from the fact that they were not politically connected, they were told there was insufficient room in the marquee. (An hour into the funeral service, soldiers were moved in to occupy the hundreds of empty seats to avoid embarrassment.)

So the people Mandela was born amongst, and wanted to be buried amongst, stood on hillsides kilometres away staring at the blue skies and the great white cocoon structure. And inside it, some people whom Mandela had never encountered were able to network with other people Mandela had never encountered because of their political, business or celebrity status. They included politicians who had been fingered for corruption and exploiting taxpayers’ money, who, despite their despicable conduct, felt no shame in sitting near Mandela’s coffin. Also among them was soapie actress Zama Ngcobo, who tweeted a picture of herself posing with the coffin in the background. The tweet read “Fair Well Tata!” (sic) and was hashtagged “#IWasThere”.

On the evening before the ANC launched its manifesto at a mass rally in Mbombela, the party hosted a gala dinner attended by the Who’s Who in political and business circles. The dinner, which doubles as a fundraising event for the party, happens annually during the ANC’s anniversary celebrations and allows the party funders to mingle and dine with the top leadership.

There is obviously nothing innately wrong with the party hosting a fundraising event or hobnobbing with the rich and famous. However, these and other events, like the post State of the Nation Address dinner, allow the well-heeled access to the political high-fliers – access that ordinary people would never have. These events allow people with wealth to develop relationships with the political elite and be in the position to influence decision-makers and have access to information.

The corrupting influence of such relationships was plain to see when the Gupta family exploited their access and friendship with President Jacob Zuma to commandeer a military air force base to land their private jet in April 2013. Despite the embarrassment and scandal around the incident, the family is still en vogue with the political set. This was apparent at a breakfast briefing on Monday morning hosted by the Gupta-owned The New Age newspaper, where Atul Gupta was seated at the table with the ANC’s top six leaders.

Historically, the ANC has been an organisation oriented towards its grass roots structures rather than the rich and powerful few who have access to the leadership. As it heads out onto the election trail, its leaders will have to venture out from behind their high security walls and their top-of-the-range cars to mix with the great unwashed. They will have to convince voters that despite the growing social distance between them, they still represent their true interests and care about their welfare.

On Tuesday, in a speech to the eighth Pan African Congress at Wits University, suspended Cosatu general secretary Zwelinzima Vavi said workers should consider how they were being represented in government.

“Workers around the world, not only in Africa, have always elected political elites that have implemented policies that do not serve their political and economic interests,” the text of Vavi’s speech distributed to the media stated.

“Perhaps we need to think very hard about how we should politically organise workers to represent their own interests in the state,” he added.

This is the first clear signal from Vavi that workers should consider political representation away from the ANC and the alliance. At a special congress in December, the National Union of Metalworkers of South Africa (Numsa) resolved to explore the establishment of a “movement for socialism”, saying workers needed a political organisation. This could either take the form of a new political party or a civic movement. Numsa has been Vavi’s key backer in his battles with the Cosatu leadership following his suspension in August for sexual misconduct.

Vavi’s spokesman John Dludlu confirmed on Tuesday that they had received a charge sheet from Cosatu “with all manner of allegations against him”. “We are in consultation with both our lawyers and allies within and outside the federation on the way forward,” Dludlu said.

The comment suggests that Vavi’s response to the charge sheet might be to refuse to subject himself to a disciplinary hearing to answer to the charges. The “consultation” could include the option that he walk away from Cosatu altogether and be a leading figure in the new worker movement.

Author and political commentator William Gumede says Vavi’s “national appeal” beyond the unions places him in the optimum position to be the “rally point” in a new left of centre political organisation.

He said the sheer force of events playing out in the country, as well as class differences, were propelling the formation of a workers’ party before the next local government elections in 2016.

“The ANC has unfortunately moved towards a leadership serving the elites and it is now difficult for ordinary rank and file workers to have a direct say in policy direction.

“Ordinary supporters are being excluded out of the economy while the elite live in a bubble. The social gap is becoming too wide,” Gumede said.

He said the high-flying lifestyles of the political leadership, such as the R206 million upgrade of President’s Zuma’s private home, would not be such a big problem in a better economic climate.

“It would have been less of a scandal if the rank and file were better off economically and if unemployment were below 10%. But it is economically very tough. That is why you have leaders moving one way and members moving the other way,” Gumede said.

He said the clash of classes was also playing out in the unions, which was why some of them, such as the National Union of Mineworkers, were under pressure. The conflict of different class interests could cause further fracturing in trade unions, in Cosatu and the ANC.

Gumede said the rise of the elites should not be an inevitable consequence of liberation movements becoming ruling parties, although the trend was evident in many countries across the world. The ANC was supposed to be different and break the trend by being responsive to its support base. He said a strong Cosatu could have fought to take over the ANC from within, as had been the case with progressive forces in Europe and Asia. If that were not possible, the option was to move out of the alliance and lobby from outside.

But, says Gumede, this is a “scary and difficult” consideration for anyone trying to chart a path away from the alliance. They would be cut off from patronage and resources from the state and state-owned enterprises, and would have to survive with no money for a while until they could establish themselves.

The space for the new centre-left formation is out there but requires hard lobbying and mobilisation. Gumede estimates that about 40% of the ANC is deactivated at present – either through disillusionment, sidelining, factional battles or apathy. This would include those who stepped back after the recall of President Thabo Mbeki and former Umkhonto we Sizwe members who have kept silent throughout the leadership battles.

Gumede says it would take a person of “significant weight” to marshal all these forces behind a new formation. “Vavi is that type of person,” Gumede says. “He could be the rally point.”

He says a similar scenario played out in Brazil when the Worker’s Party was formed. Lula da Silva, although he did not have national appeal initially, became the rally point and led the party to a landslide victory in 2002. According to Gumede, considering his national appeal, Vavi would be in a much stronger position to take on such a role.

The first step will be for Vavi to make the psychological and emotional break which binds him to Cosatu and the ANC. The fact that he is speaking out against the political elitism infesting the culture of the ANC means that he is moving further away from the centre of gravity in the alliance.

The generation of the ANC’s heroic leaders is now passing rapidly, and the current crop of politicians has more to thank the movement’s deep roots and unbeatable brand for being in power. Of all the political figures that emerged since the dawn of our democracy, Vavi is perhaps one of the few remaining that still ascribes to the values of the leaders of yesteryear. This makes him uniquely positioned to seriously challenge the ANC’s hold on absolute power from outside.

To many, Daily Maverick included, it was obvious that, with the slew of accusations and controversies levelled against him, Vavi seriously overstayed his welcome in the federation and the alliance that are increasingly moving away from their roots. The array of disciplinary charges now thrown at him might just be the tipping point.

And when they are done kissing babies and handing out food parcels on the campaign trail, the elites will return to their ivory towers and continue their charmed existence in their bubbles. New elites will join them and the class of affluent politically powerful people will continue to expand and drift away from the ANC that delivered South Africa’s liberation. DM

Photo: Cosatu general secretary Zwelinzima Vavi speaks at a news conference in Johannesburg on Friday, 24 August 2012 on the shooting at Lonmin’s Marikana mine. Picture: Werner Beukes/SAPA