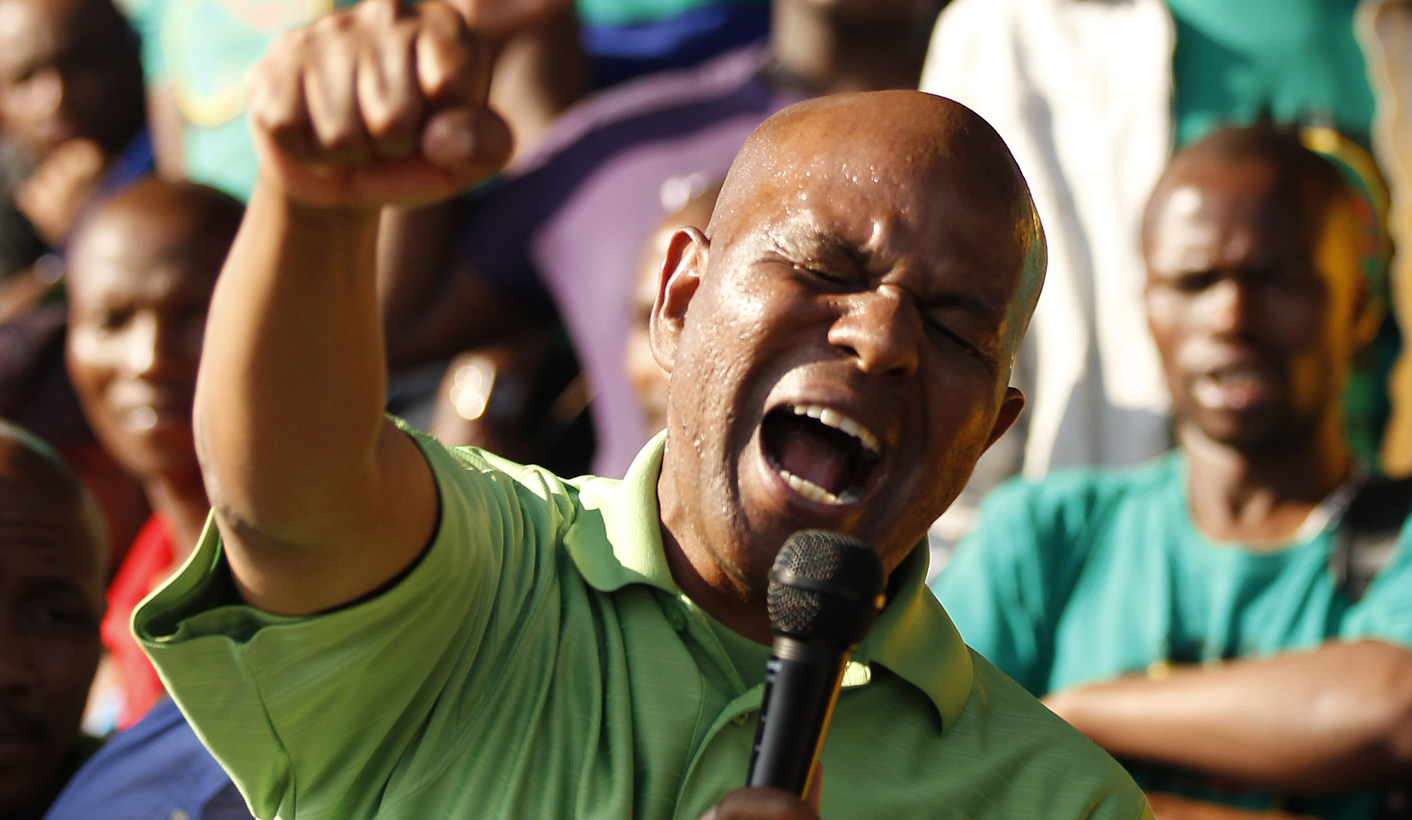 Association of Mineworkers and Construction Union (AMCU) president Joseph Mathunjwa was in damage control mode at Impala Platinum (Implats) on Monday. Workers came to a meeting in their numbers to hear what he had to say after they were addressed by Implats employee and AMCU member Vusi Maqanda last week, who told them of the corruption within the union. As strikes once again loom over Rustenburg, we could be in for another shift in platinum politics. By THAPELO LEKGOWA.

Monday’s meeting at Impala was addressed by Mathunjwa, who apparently responded to the allegations against AMCU. Many people started walking off in the early stages of the meeting as they noticed Mathunjwa was not touching on the issues they came for. “He has given management 48 hours’ notice; so what? Who wants to go on strike in January, he is crazy,” one of the workers mumbled as he walked out of the meeting. AMCU announced on Monday its members voted to go on strike at Impala and would soon inform the company when the industrial action would begin.

AMCU came to Impala through a workers’ committee that was formed in January 2012 after workers had resigned from the National Union of Mineworkers (NUM), Maqanda told Daily Maverick. “When it came it made promises to the workers including R12,500 as a basic salary and development of policies which are worker-orientated. Thus far none of those have been achieved. It is us [local leaders] who face the fire when workers start asking questions.”

Maqanda is one of the strikers who got shot in 2012 when Implats workers were on strike. He was in hospital for six months. “I was shot for AMCU and now AMCU does not care about us.” Maqanda says they have now formed a workers’ committee which they are confident will do away with AMCU, just as it was able to do away with the NUM.

“We waited 30 years to address the unjust treatment by NUM; we will not wait that long with AMCU,” another worker, Julius Malatsi, added.

“The Joseph Mathunjwa we were introduced to was without bodyguards and now he comes to address workers with bodyguards. Workers were a little bit shocked by the presence of three big white men besides Mathunjwa. Is this man afraid of his own people now?” they asked.

The workers’ committee, under the leadership of Maqanda and Malatsi, will be engaging various unions on the possibility of taking up their members. They were very hesitant to mention names of possible unions they might suggest to workers, but they did say it would not be the NUM. This might leave a vacuum for unions that are seen as radical, such as the National Union of Metalworkers SA (Numsa).

Workers will decide which union is best for them, stressed Maqanda, and that process will only begin once all members have resigned from AMCU. The union that stands a chance of representing the workers must have the following qualities: a good historic track record of representing workers; financial reports; education programmes for shop stewards and workers; and solid policies, said Maqanda. He added that AMCU had never trained its shop stewards and when they have to engage the company during a dispute the workers automatically lose, and the union doesn’t seem to care. “We need a union that negotiates, not [one that] calls for a strike when it cannot articulate itself on the table,” said Maqanda.

“The transition will not be smooth, we are aware of that, but that’s what you get when you have leaders who are impatient and rule with pangas. They can never be wrong and never questioned. AMCU does not live by its slogan, ‘The truth shall set you free’. Here, the truth shall get you killed.”

It’s a dangerous time for the union to split. AMCU will soon go on strike at Impala, the second largest global producer of platinum, and has been given the green light to strike at Anglo American Platinum and Lonmin, meaning half of global platinum production could be affected.

The NUM has been on strike at Northam Platinum Zondereinde, the last mine in the platinum belt still under the union’s control, for more than 10 weeks – and on Monday said, “Remarkably, it has been a peaceful, bloodless and effective legal strike in the platinum sector. It has demonstrated that workers and their unions can undertake an effective peaceful industrial action unless galvanised otherwise by forces filled with ulterior motives.” DM

Photo: Joseph Mathunjwa, president of the Association of Mineworkers and Construction Union (AMCU), gestures as he addresses members of the mining community during a strike at Lonmin’s Marikana platinum mine in Rustenburg, 100 km northwest of Johannesburg, May 15, 2013. REUTERS/Siphiwe Sibeko