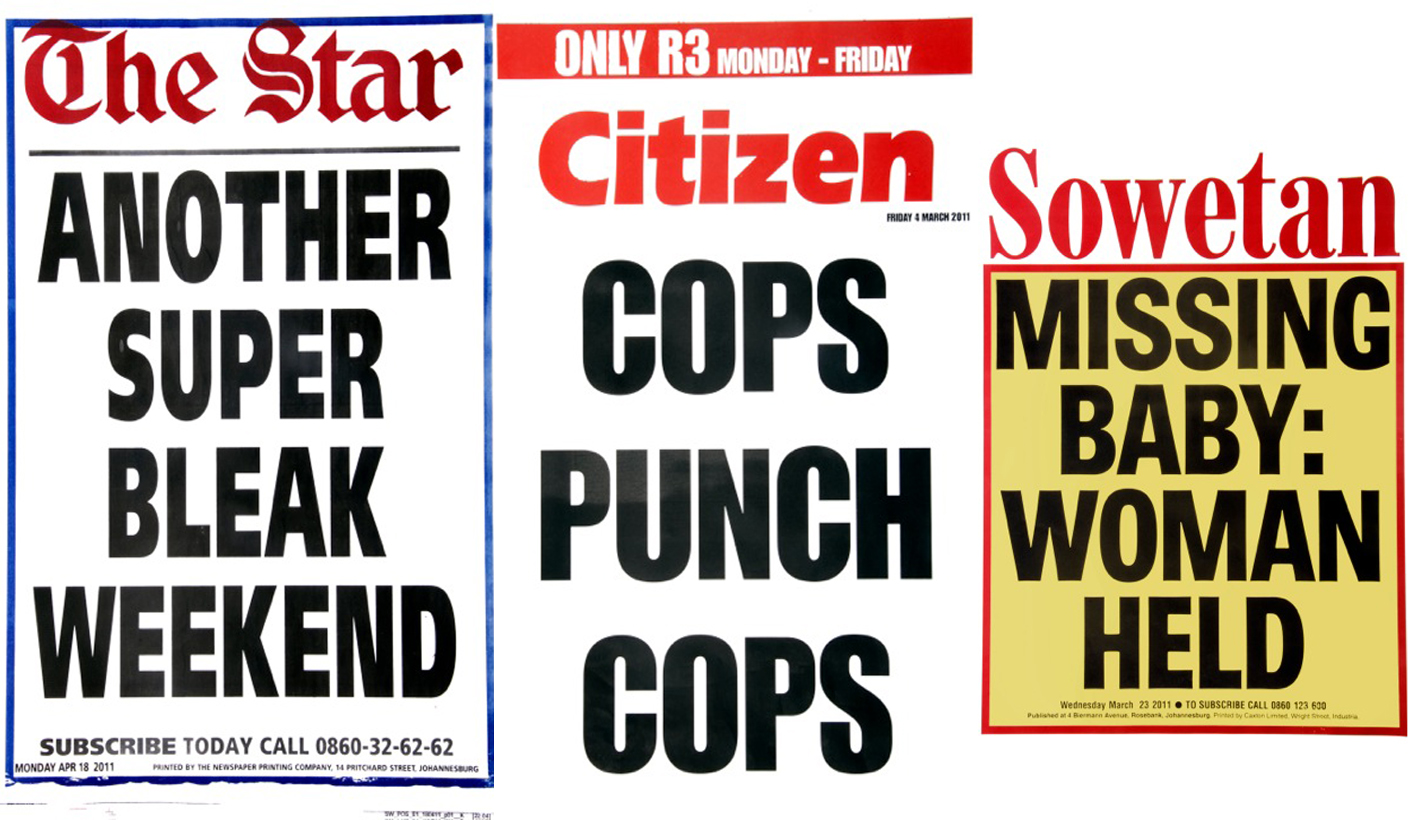 Frozen Chicken Train Wreck is a minimalist collection of the street poster headlines that are de rigueur in any South African city. Tossed out with the day’s garbage, they’re the history we discard. Repurposed as literature, they’re a revelation. By RICHARD POPLAK.

Johannesburg’s inaugural tabloid episode—the moment we began mediating our experience through four-word headlines tacked up to trees—ended ambiguously, and in blood. Captain James Beeselaar’s second visit to the peeling bungalow in Johannesburg’s southern suburbs during the summer of 1968, and this time he did not plan on leaving without his quarry. He and his partner, Detective Sergeant Posthumous, were after a man named Raymond Burch, out on parole for a conviction under the Immorality Act, and the only suspect in a cold case that had terrorised Johannesburg for the past four years. Burch was believed to have chopped his wife into pieces, disbursing her body parts across the city in a number of battered suitcases. (Her head was found in Zoo Lake by two 10-year-old boys). Now, at long last, the manhunt was over, and Burch had nowhere to run.

According to police reports, Posthumous drew his revolver and slid the deadbolt clear. Inside, a man stood by the window, rusted gardening implements cluttered around him. He wore, noted the police, homemade bracelets fashioned from tin, both of which were connected by a filigree of wires to an electrical socket. Without a word, and with all the casualness of a fellow turning on the radio, Raymond Burch reached over and flicked the light switch. His shoulders jerked, his mouth locked in a ghastly rictus. Burch’s body, rigid with current, hit the floor like a toppled statue.

Beeselaar would very much have liked to ask Burch why he murdered and butchered his fourth wife, why he shoved her remains into a number of suitcases, why he flung those suitcases into Wemmer Pan, Boksburg Lake and other manmade bodies of water along the reef. But the charred mess at the captain’s feet would take those answers to a murderer’s grave—an unshaded, untended plot in a dusty prison yard on the outskirts of Africa’s greatest city.

The Suitcase Murders (plural added by the press long before the crime was solved) was one of those atrocities that is said to “end a city’s innocence”, insofar as Johannesburg had an innocence to end in the first place. Its gruesome particulars were parsed minutely in the papers, but more to the point, they were affixed to lamp posts, electricity poles, trees—each gruesome milestone transformed into a pithy headline, each headline printed on thin paper, each resultant poster advancing the story bit by hacked-off bit. “A Murder As Joburg As Jacarandas”, screamed the most famous.

Johannesburg is a city defined by violence; it is a mining town, a frontier post. There is no history in Johannesburg, because the present is all that matters; as such, life becomes a series of erasures. “All gone into the unremembering dust,” wrote Herman Charles Bosman, the city’s greatest chronicler, and a convicted murderer in his own right. Even the Suitcase Murders—which defined the city’s paranoia and helped galvanise the press in an orgy of hysteria that remains its default setting—has disappeared from the public consciousness. And yet there are constants: those poster headlines, messages tapped out from a nightmare bush telegraph, announcements that last a day, sometimes less with the rains. Three words, four words, occasionally five, they are written by sub-editors toward the end of their shifts in order to sell the following morning’s news. At day’s close, they are binned along with our history.

Until now, that is. There are a number of reasons why a book giving these posters their due would be important, but we had little reason to expect something as spare—and in its sparseness, as perfect—as Laurence Hamburger’s Frozen Chicken Train Wreck (Chopped Liver Press/Ditto Press 2013). And while the book includes nothing from the Suitcase Murders, it instead collates that case’s many descendants, the tiny moments of blood and terror that define South African life, and the high-pitched tone at which they enter the discourse. This is a contemporary book—its subject is Jacob Zuma’s Mzansi—but it becomes a historical document as every archaic headline drifts further and further from its moment in time. Who among us can remember why “Sex Strike Hits School” once resonated, or why The Citizen thought a declaration of “The End Is Nigh” on 20 December 2012 was more pertinent than it was in 2011, or in 1998? None of this properly matters—by yanking headlines out of the continuum and capturing them inside a hardcover, Hamburger makes sure that each pithy refrain speaks to our present, a present that remains remarkably constant. Regimes have fallen since the likes of Raymond Burch went to work on his wife, but Frozen Chicken Train Wreck forces us to ask: what’s new?

For it is a violent book: “I Killed Your Mom—Dad!”; “Gay Basher Bashed!”; “Cops Shoot Cops!”. It is a sexy book: “Amorous Doctor Gets Off”; “Cock Loves Chicks”; “Banks Fingers You!” It is a sexually violent book: “Cop Rapes Man!”; “Hooker Bites Flank!”; “ET Sex Death Riddle!”. And it is a superstitious book: “Goat In Man’s Underpants!”; “Win A Piece of Heaven!”; “Graveyard Harvest Time!”

Frozen Chicken Train Wreck isn’t particularly interested in evincing hipster irony at tabloid ridiculousness; some of the headers collected herein are from our more respected presses. In the icy glibness of these double, sometimes triple entendres—which make sport of personal and political horrors while simultaneously rendering them manageable—we learn some uncomfortable truths about our obsessions, and how we indulge in them as a society. The book carefully teases out a number of tropes—rape and sexual violence most notable among them—that aren’t there merely to shock, but to make a series of social observations. And if our mainstream press has for decades offered us these nuggets of bittere gelechte, the Yiddish concentration camp term for “gallows humour”, then they must allow us a glimmer of hope: if we’re able to laugh at our manifold insanities, we’re at the very least acknowledging them.

Ultimately, though, these posters are not social observations or public service announcements. They’re advertisements for newspapers stuffed with advertisements, the first stop on a feedback loop of selling stuff. They’re also supposed to function as portals for deeper wells of information—they’re not the news but shills for the news, meant to whet our appetites for further insight. Yet in truth, these abbreviated haikus have come to represent our reality. In short, sharp, musical bursts, they’re the street telling us where we stand. And then they disappear.

Or once did. Now, one hundred of them are collated in a volume that Hamburger has claimed will be the first in a series. The book itself literally stinks—crack its pages and the reek of ink wafts forth, reminding us that these posters, faithfully photographed and recreated, were once objects with a specific utility. Frozen Chicken arcs and dodges through dozens of mini-narratives—rape, cops, goats, corruption. Hamburger allows each poster to inhabit an A4-sized page, and leaves a blank page overleaf. The book is coyly authorial—Hamburger chose the sequencing, but refuses to explain his reasoning, to provide a didactic text, or to offer so much as a glossary for those unfamiliar with the local argot. We encounter the posters as we would were they tacked to a tree, armed with whatever lexicon we may carry. For a foreigner with no knowledge of the South African idiom, the experience must be disorientating, horrifying. It is only marginally less so for the local.

Hamburger’s approach is both a defensive crouch and an act of supreme tastefulness: the posters are allowed to speak for themselves. (Or rather, he demands that they speak for themselves, a subtle rebuke against those who made them). Restraint is not a contemporary value, but it remains a virtue, and for the book’s stalwart ability to ignore explanation, Hamburger probably owes a debt of thanks to his publishers, photography duo Adam Broomberg and Oliver Chanarin of Chopped Liver Press, who know a thing or two about visual impact unimpaired by needless blather.

Hamburger is a filmmaker by trade, and perhaps he intuitively understood that these posters function like frames of film, looped together to form narratives as we drive by—one endless Warholian take on our contemporary existence. When flipped through uninterrupted, the book feels like an animated film, a project that would work well, but not as well, as a movie or music video.

Frozen Chicken Train Wreck, then, is a reminder of who we are, how we speak, how we live. Its declamations carry us back to a past that we’ve worked so hard to forget, to any number of grisly suitcase murders from any of our bloody eras. They’re jokes, they’re epitaphs, they’re song lyrics, they’re street poetry. They’re As Joburg As Jacarandas, and as South African as Cops Shooting Cops. DM