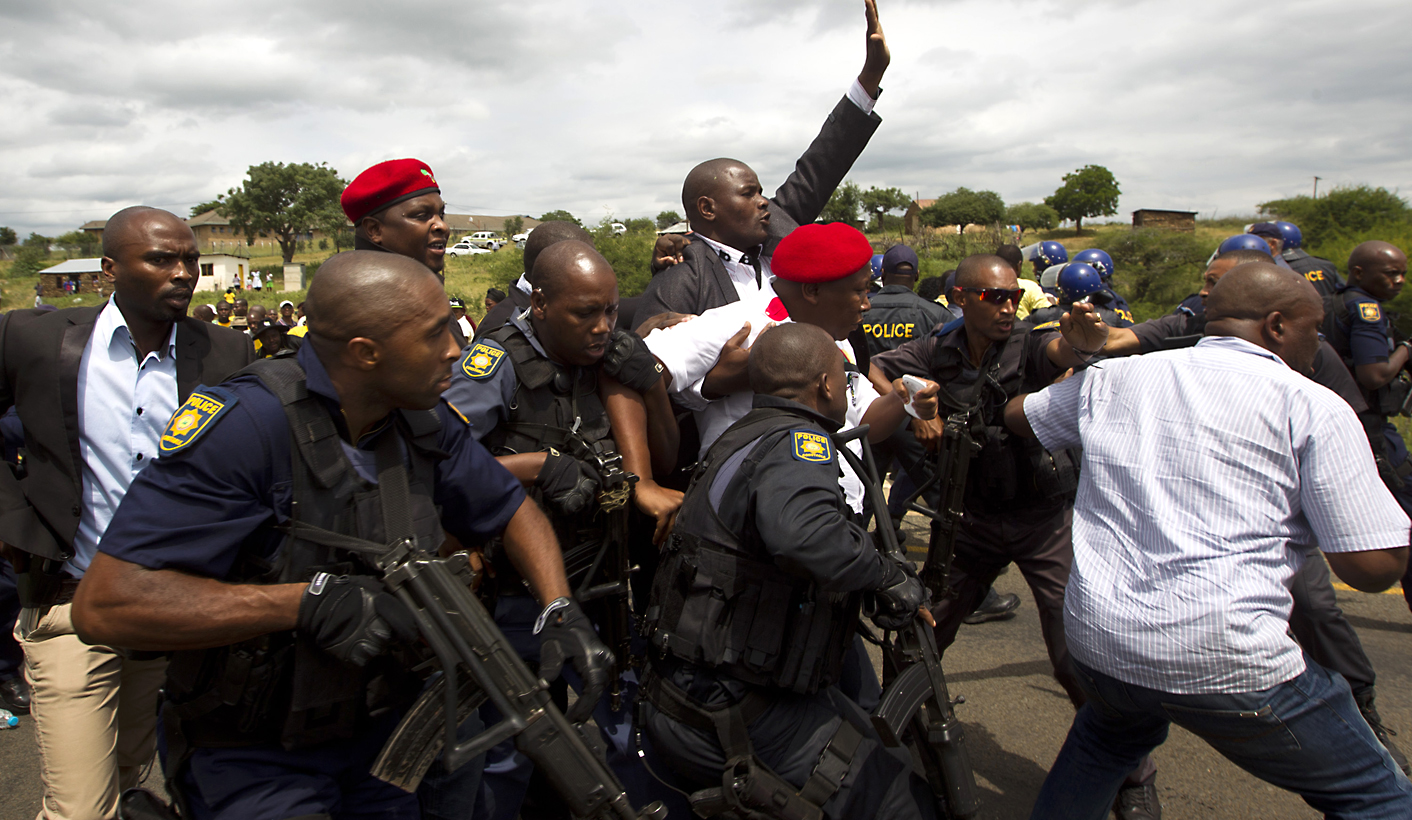 The Economic Freedom Fighters (EFF) went to President Jacob Zuma's home town of Nkandla on Saturday to draw headlines and provoke ANC supporters. It worked. Under threat and angry at the loud-mouthed former Youth League leader, the parties supporters greeted Malema with stones, all under the watchful eye of the media. It was good ol' fashioned intolerance at its best. By GREG NICOLSON & THAPELO LEKGOWA.

Sometimes, the ANC makes it too easy for opposition parties. The Sunday headlines should have been devoted to describing and dissecting the party’s 2014 election manifesto, launched on Saturday in Mbombela. Instead, the ANC shared the day with Malema, shown in photographs surrounded by police protecting him from a mob of ANC supporters in Nkandla.

It was a master stroke from the EFF. In one fell swoop, it diverted attention away from the ANC and onto Malema. It portrayed ANC supporters as intolerant of opposition parties and freedom of association. The public was reminded that a fortune has been spent on Zuma’s private home, while only 300 metres away, where the EFF were donating a house, others live in poverty.

Photo: Members of the Economic Freedom Fighters (EFF) work on a house they built for an elderly woman, near the homestead of South African President Jacob Zuma, in Nkandla January 11, 2014. REUTERS/Rogan Ward

If ANC supporters had not gathered to intimidate and block Malema, however, it’s unlikely it would have been a front-page news story. And yet the party not only let it happen, but were a part of its organising, just like they were when Democratic Alliance leader Helen Zille came with the more provocative mission of viewing the R200 million security upgrades to Zuma’s home and was met with police who stopped her because her safety was threatened by the ANC fans.

Since being expelled from the ANC, Malema was prevented by police from speaking to striking Marikana mineworkers a month after the massacre, which we now know was because the police believed he may try to provoke the police into using violence in front of the world’s media. With EFF, he was in a stand-off with SA Students Congress members at the Unisa when the university cancelled a talk he was scheduled to give in September 2013. Speaking at a press conference on Thursday, Malema said his party often finds it difficult to book venues. The visit to Nkandla would be a test of political tolerance, he told the media.

According to Sunday Independent, he said the ANC failed that test. Malema’s Mercedes was blocked by protesters and police, many of which were in attendance, advised they take a different route. Malema got out of the car and proceeded on foot while ANC supporters threw water bottles, reportedly provided by Zuma’s son Edward, at him.

“We did not come to those people, but it exposes them that they can’t tolerate other political formations. Zuma came to my township in Seshego and no one blocked him. The ANC and Zuma must be ashamed that they send Zuma and their supporters to come disturb a meeting of another political party because when they have their meeting no one disrupts them,” said Malema. “South Africa belongs to all who live in it. I belong here in Nkandla. This is my land, this is my country. And Nkandla is the home of the EFF.”

Captain Thulani Zwane from the SAPS said 30 people were arrested on charges of public violence after the crowd started throwing stones and damaged police vehicles. Police fired teargas, rubber bullets and used a water canon to disperse the crowd. Those arrested will appear in court on Monday. A large contingent of police were deployed to the area and Zwane said the police have well-trained members and are ready to deal with any situations ahead of the elections.

Jackie Shandu, EFF’s commissar responsible for research, policy and political education in KwaZulu-Natal and convenor for the Ethekeweni region said around 500 EFF members came to hand over a house to Sthandiwe Hlongwane, a Nkandla resident. About 200 ANC supporters were there from Nkandla and the surrounding areas. “We were intimidated, roads blocked and we were stoned by the ANC,” he said on Sunday over the phone after a meeting of party officials. “The interference of our meetings and intimidation is really subversion of democracy by the ruling party. EFF is the only real alternative to the ANC and it is now a real threat to the ANC,” he claimed.

“We will not be surprised if the Hlongwane family is harassed or worse – the house we built is burned down by the ANC. [That claim has not been independently verified – Ed.] Nkandla is a new ground for us. We took our foot to Nkandla and the people are brave and receptive. Nkandla is the belly of the beast,” said Shandu. “We must commend the police for how they handled the ANC hooligans and the media for a fair coverage.” He said the party’s membership figures are yet to be audited and could not say how many members they have in the area or province. (On Thursday, Malema claimed EFF had over 400, 000 members across the country, but added that figures were not yet official.)

The ANC members’ actions have been widely criticised. Castro Ngobese, spokesperson for the National Union of Metalworkers (Numsa) which has withdrawn its support of the ANC, voiced his disapproval on Twitter. “The ANC fought against No Go Areas; ANC fought against political intolerance and intimidation. It’s can’t be ANC that adopts Inkatha tactics,” he said, referencing the violence of the 1990s.

Nkandla fell under the control of the Inkatha Freedom Party (IFP) in December 2012 and the party’s Velaphi Ndlovu said on Sunday that anyone who has resources to help the poor in the area should be allowed to do so. “Any person donating to anyone in South Africa has a right to donate to who they want to,” said Ndlovu, speaking on the phone from Umlazi, where he stated the IFP was trying to help an elderly lady fix her home but was facing issues with an uncooperative ANC councillor. Trying to prevent Malema from getting to the house in Nkandla shows the ANC feel that only they can help people, he said, but we should welcome any help for the poor, which should come without preconditions.

Democratic Alliance spokesperson and candidate for Gauteng premier Mmusi Maimane has faced hostile ANC supporters in a number of areas on the election campaign trail as his party tries to expand its voting base. He says the problem is “worrying” and ties it back to the ANC prioritising staying in power. “The ANC, in fact, suffers from very weak leadership at all levels,” says Maimane. When opposition parties try to campaign in certain areas, ANC leaders fail to understand or respect democratic principles and allow them their rights.

The fracas gave Malema a platform to continue his radical stance. “Nobody can foresee when we die. When the ticket is written, then it is written. If it has to be a bullet from Nkandla, so be it.”

Zuma’s son Edward said the EFF were trying to provoke the ANC. They were. And the ANC bought it hook, line and sinker. DM

Photo: Economic Freedom Fighters (EFF) leader Julius Malema is escorted by police after his car was blocked by supporters of the African National Congress near the homestead of South African President Jacob Zuma in Nkandla January 11, 2014. Malema was in Nkandla to handover a house built by EFF party members for an elderly woman. Police erected a roadblock and searched vehicles passing through on Saturday, ahead of the handover of the house which is situated some 300 metres from the perimeter fence of Zuma’s home, local media reported. REUTERS/Rogan Ward