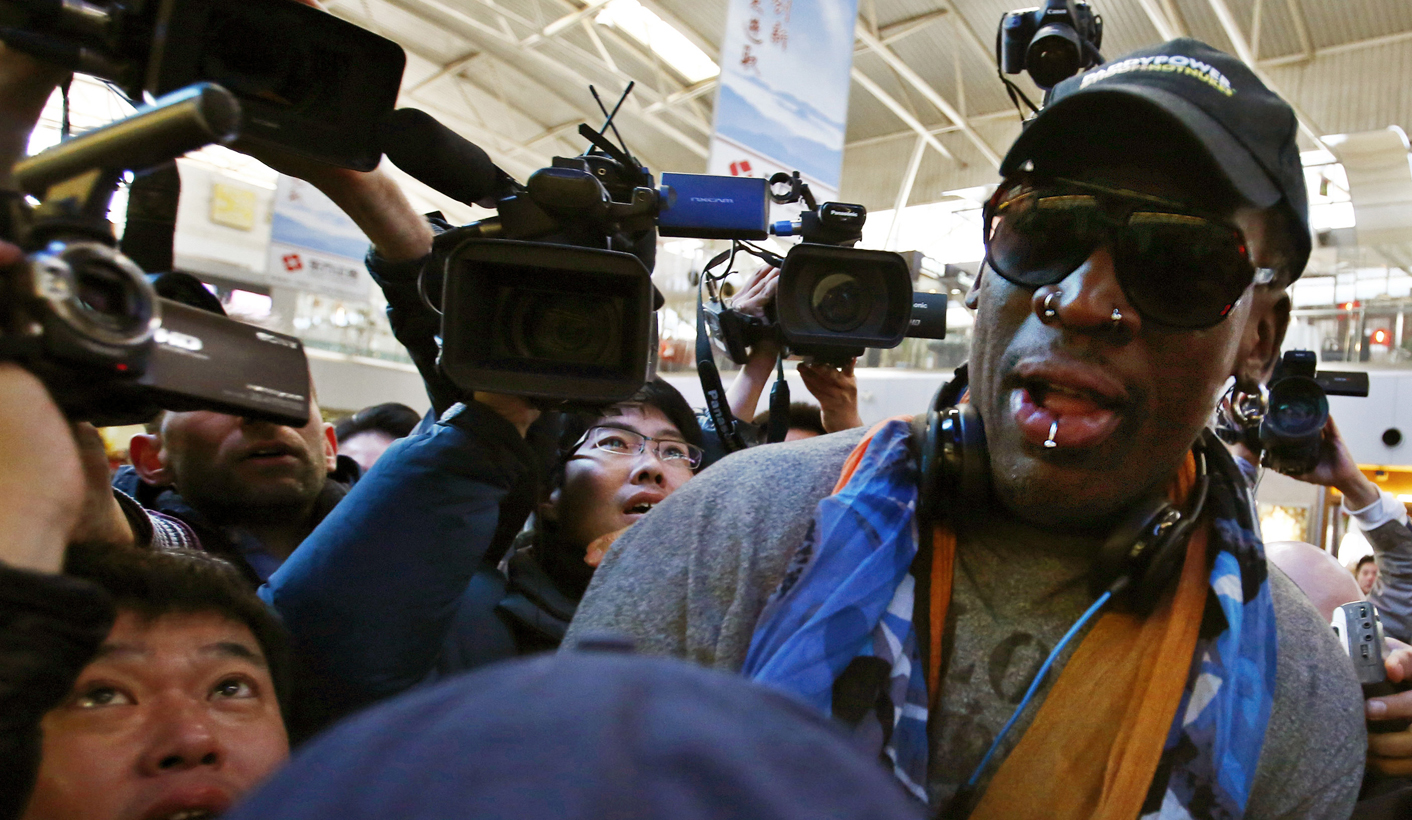 Retired U.S. basketball star Dennis Rodman was to visit a North Korean ski resort on Thursday, possibly along with dictator Kim Jong Un, as a statement was issued on the former player's behalf apologising for comments he made on an American jailed by Pyongyang. By James Pearson and David Chance.

A source with direct knowledge of Rodman’s itinerary said the 52-year old was on a helicopter to a new multimillion dollar resort which is one of Kim’s showcase projects.

It was not immediately clear if Kim was with Rodman on the flight. The source declined to be named due to the sensitivity of the issue.

Rodman’s visit to North Korea, his fourth, has drawn criticism from human rights activists and the family of imprisoned U.S. missionary Kenneth Bae after Rodman appeared to suggest in an interview peppered with obscenities that Bae, rather than the North Korean authorities, was responsible for his incarceration.

Rodman’s public relations firm issued a statement attributed to the retired player apologising for the comments and saying that he had been drinking on a stressful day.

It was not possible to verify with the company whether Rodman had seen the statement as it did not reply to e-mail or telephone inquiries.

“I want to apologise, I take full responsibility,” Rodman was quoted by CNN as saying in the statement. “I embarrassed a lot of people. I’m very sorry. At this point I should know better than to make political statements. I’m truly sorry.”

Bae’s sister, Terri Chung, has said her family was outraged by Rodman’s comments and that he should use his access to the North Korean leader to advocate on Bae’s behalf, rather than “hurl outrageous accusations”.

“He is playing games with my brother’s life,” Chung said in a statement.

On Wednesday, Rodman led a chorus singing “Happy Birthday” to the leader of the isolated and heavily sanctioned country at a basketball match that Kim attended with his young wife.

North Korean state media said the song was “reflecting (Rodman’s) reverence” for Kim Jong Un, and that he had organised the game as a gift for his birthday, confirming for the first time the young leader’s date of birth. He is believed to be 31.

The Rodong Sinmun, the official newspaper of North Korea’s ruling Workers’ Party, dedicated its front page on Thursday to coverage of the basketball game and published photos of Kim sitting and laughing with Rodman.

“Dennis Rodman said he was overjoyed and teared up when he met the Dear Respected Marshall again,” the front page article said.

The fading basketball star’s trips had been financed by Irish bookmaker Paddy Power, although it has now withdrawn its funding.

It is not known whether Rodman has the capacity to fund another trip. North Korea rarely pays for this kind of visit, according to experts on the country.

Rodman has described Kim, who has been in power for just over two years as his “friend”.

Last month, his uncle Jang Song Thaek was executed in one of the biggest and most public purges undertaken in North Korea, which has been ruled by the same family for three generations.

Jang is just one of hundreds of thousands North Koreans who have faced death or imprisonment in the North. An estimated 150,000-200,000 people live in brutal conditions in the country’s political prisons and forced labour camps, according to rights activists.

Defectors from the isolated country have testified to summary executions and rampant human rights abuses on North Korea. They say they were starved, beaten and abused in work camps where many die and that babies born in the camps were killed.

While North Koreans suffer from food shortages and malnutrition, according to United Nations assessments, Kim has pushed ahead with massive building projects such as the Masik Ski Resort that Rodman will visit.

South Korean officials estimate it cost hundreds of millions of dollars to build and North Korea aims to make $43.75 million in annual profit from the resort, according to documents prepared for potential foreign investors. It expects up to 5,000 skiers to visit per day.

Pictures released at the resort opening late last year showed just one ancient chair lift for the resort and an assortment of snow equipment that appeared to have been imported despite a United Nations ban on the export of “luxury” goods to the North. DM

Photo: Former NBA basketball player Dennis Rodman is surrounded by the media at the Beijing International Airport in Beijing December 19, 2013 as he prepares to leave for Pyongyang. Rodman said on Thursday he was not going to North Korea to talk about politics or human rights, despite political tension surrounding the execution of leader Kim Jong Un’s uncle. REUTERS/Petar Kujundzic