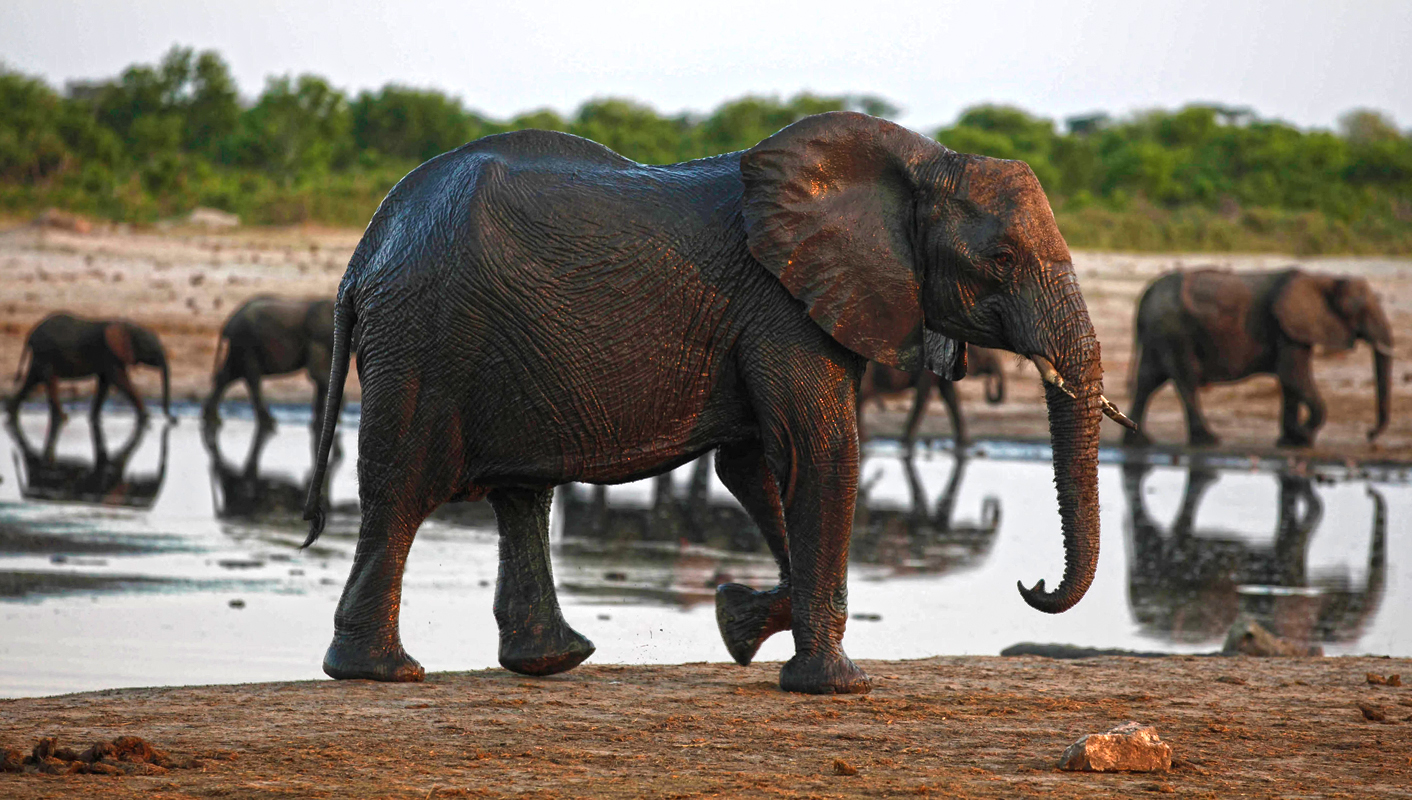 A herd of elephants gather at a watering hole inside Hwange National Park, about 840 km (521 miles) outside Harare, October 28, 2013. Zimbabwean ivory poachers have in the past two months killed more than 101 elephants by poisoning water holes with cyanide, which according to Zimbabwe's Environment Minister Saviour Kasukuwere on September 25, 2013, is endangering one of the world's biggest herds. Picture taken October 28, 2013. REUTERS/Philimon Bulawayo (ZIMBABWE - Tags: ENVIRONMENT ANIMALS) - RTX14SH3

In the wake of the Elephant Summit held in Botswana in early December where urgent measures to halt the rampant illegal ivory trade were adopted, one is left asking if it is enough. By CLARISSA HUGHES.

Against a backdrop of ever-increasing levels of poaching across Africa the Summit was called to tackle the onslaught that threatens this iconic species. Statistics released at the summit indicate that 22,000 elephants were poached in 2012, an improvement on the estimated figure of 25,000 elephants poached in 2011. However, ivory seizures in 2013 signal that elephant deaths in 2013 may reach 40,000.

“We have gathered to secure demonstrable commitment to undertake those measures that have been deemed urgent across range, transit and consumer countries,” said H.E Lieutenant General Seretse Khama Ian Khama, President of the Republic of Botswana, at the official opening of the Summit.

Attended by high-level officials from African elephant range states, including Gabon, Kenya, Niger and Zambia, ivory transit states of Vietnam, Philippines and Malaysia and ivory destination states, including China and Thailand, the meeting has been hailed a success. However, it is reported that only six of the countries represented signed the agreement at the Summit, with the remaining representatives requiring higher approval.

Of the fourteen urgent measures adopted by the meeting, the most important one involves classifying wildlife trafficking as a ‘serious crime’ – a move that will unlock international law enforcement co-operation provided for under the United Nations Convention Against Transnational Organized Crime. This co-operation includes mutual legal assistance, asset seizure and forfeiture, extradition and other tools to hold criminals accountable for wildlife crime.

As with all good intentions, implementation remains the key.

While some countries are ramping up enforcement, both in protected areas and at their ports and borders, others have increased the penalties for poaching or ivory trading. Awareness programmes aimed at reducing both the demand and the illegal supply have also gained momentum. Earlier this year, CITES provisions were strengthened, with the eight countries most involved in the large-scale ivory trade, developing and implementing concrete action plans, which should be completed by June 2014.

But is this enough?

The three drivers of the ivory trade are demand, governance and poverty. While Africa is making great strides towards improving governance and reducing poverty, if demand is not addressed, poaching will continue.

“Despite several NGOs campaigning to reduce demand in consumer countries, the push needs to be led by those countries’ governments to be effective,” said Jason Bell, Program Director and Elephants Regional Director, South Africa for the International Fund for Animal Welfare (IFAW). “Unfortunately there is no apparent effort on the part of the Chinese government in this area,” he added.

With much of sub-Saharan Africa’s tourism industry being nature-based, the preservation of wildlife is of paramount importance to the livelihoods of millions of Africans. One in twenty jobs in sub-Saharan Africa is in tourism. According to the World Bank’s Africa Tourism Report 2013 there are 5.3 million people directly employed in the industry with a total direct/indirect employment impact of 12.8 million. The World Travel and Tourism Council forecasts that by 2022 these figures will be 6.8 million and 16 million respectively.

Furthermore, it is acknowledged that the trade in illegal ivory is funding rebel militias in many parts of Africa. Militias that not only kill, rape and pillage, but also undermine the economic growth of the continent. Think Al Shabaab in Kenya, M23 in the DRC, the Seleka in CAR and Joseph Kony in Uganda.

“We are now starting to hear global resonance of the message that the elephant poaching problem is a serious problem for all,” said Jason Bell.

Ivory trinkets are popular as gifts and status symbols in China where more and more people are now able to afford such luxuries. Incredibly 70% of consumers believe that ivory comes from natural mortalities. State media could address this misconception if incentivised to do so.

The Government of China could also pass legislation to restrict the many ivory factories in the country. But here’s the rub. With many African countries still wanting to trade legal ivory there is no way that you’ll get such a buy-in. For this kind of action to be implemented all source countries need to be singing from the same songsheet.

“Most poachers in Africa are Africans,” Meng Xianlin, director of Chinese government representative to CITES, told the state-run People’s Daily. “Locals suffer from poverty and poaching can be a lucrative business for them. The ultimate solution is to raise their living standards and income.”

Africa is on the rise. The improvement of African living standards is dependent upon the sustainable use of its natural resources. The surge in legal commerce of other types between Africa and Asia over the last decade must also open the door to negotiating agreements on wildlife products.

To borrow the phrase of the President of Botswana what we need is ‘demonstrable commitment’ to the cessation of the illegal wildlife trade. For both Africa and Asia to thrive, Asian governments need to lead campaigns to address the demand for wildlife products in their countries and African governments need to leverage their power and be unified in their stance on trade. DM

Clarissa Hughes has worked in tourism in Botswana, South Africa, Zambia and Zimbabwe for 30 years and has travelled widely in sub-Saharan Africa. She is the author of a number of tourism and African culture related articles and has published a book on southern African starlore. Clarissa works with Conservation Action Trust.

Photo: A herd of elephants gather at a watering hole inside Hwange National Park, about 840 km (521 miles) outside Harare, October 28, 2013. REUTERS/Philimon Bulawayo.