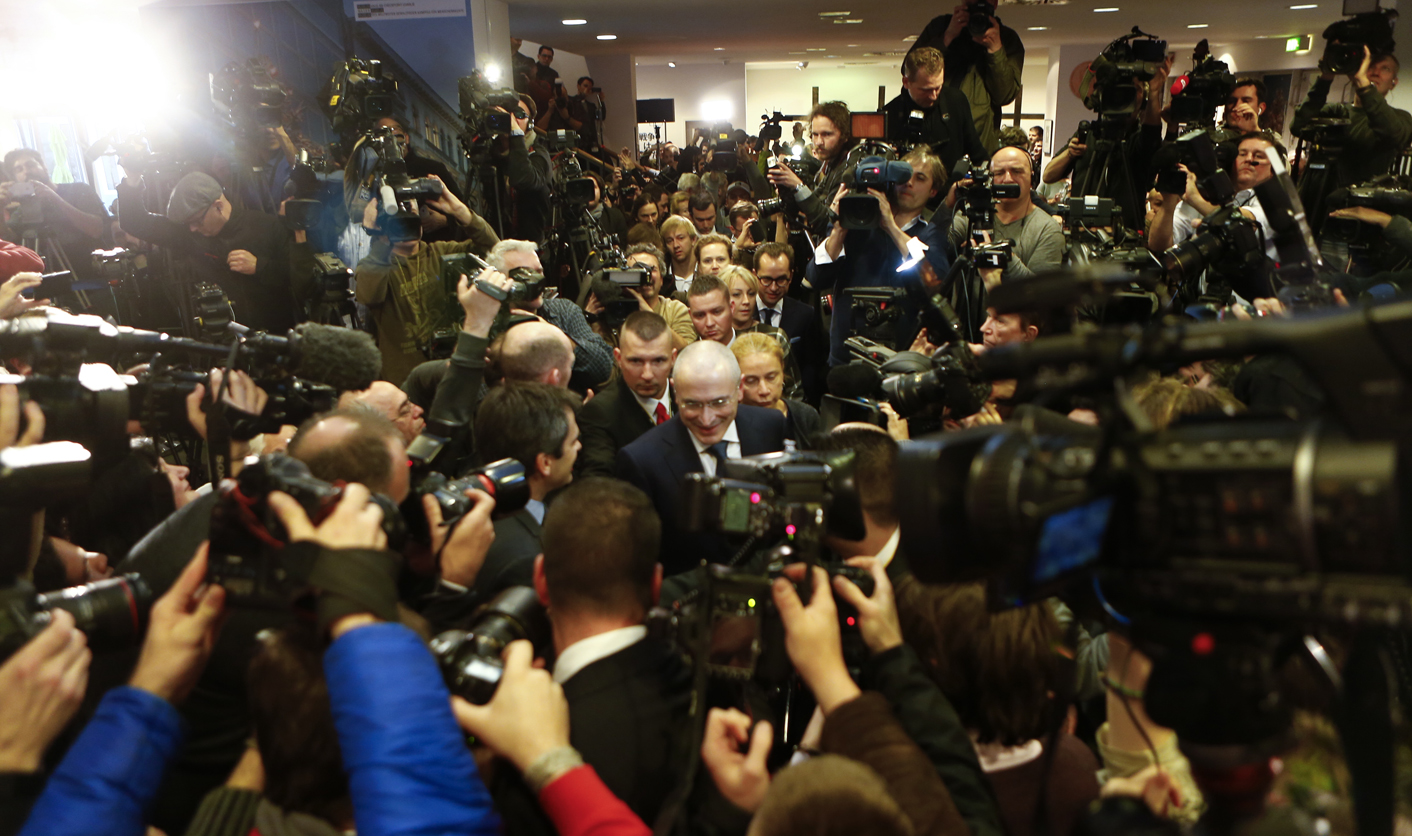 Former oil tycoon Mikhail Khodorkovsky said on Sunday he would not seek power in Russia but fight for the freedom of political prisoners, challenging Vladimir Putin two days after the president freed him from jail. By Michelle Martin and Steve Gutterman.

After more than a decade in prison that made him a symbol of what Putin’s critics say is his intolerance of dissent, Khodorkovsky, 50, told reporters in Berlin that “the struggle for power is not for me”.

But he made clear he would put pressure on Putin and urged world leaders and “we who are free” to do the same.

“We need to work further so that there would be no more political prisoners left in Russia and other countries,” he told a news conference at a museum near the site of the Berlin Wall.

“I am going to do my utmost in this regard.”

Putin unexpectedly announced on Thursday he would pardon Khodorkovsky, jailed in 2003 on fraud and tax evasion charges but seen by many as a political prisoner.

Khodorkovsky’s release from a prison camp near the Arctic Circle and flight to Germany on Friday was shrouded in secrecy reminiscent of the departure of Soviet dissidents into Western exile. He said the decision to leave Russia had not been his.

“During the trip I learned that the trip ended in Berlin.”

In Berlin, Khordorkovsky was reunited with family including his mother Marina, 79, who is suffering from cancer.

Emotional at times but looking healthy and composed in a dark suit and blue necktie, Khodorkovsky said there were no conditions attached to his release and he had made no admission of guilt in asking Putin for a pardon.

The Kremlin has given public assurances that he is free to return to Russia, but he said he could not do so now because there was no guarantee he would be able to leave again.

He said he would not advise leaders on how to deal with Russia’s “complex” president but added: “I just hope politicians from Western countries will keep in mind that I’m not the last political prisoner in Russia when they talk to Putin.”

Once Russia’s richest man, the former oil baron said he was financially secure and would not go back into business.

He said he wanted to “pay my dues to the people who are in a worse situation than I am, or those who are still behind bars”, and try to improve life in Russia. He said he had only been free for 36 hours and needed more time to decide how to do it.

Khodorkovsky fell out with the Kremlin before his arrest as Putin, then in his first term, reined in influential “oligarchs” who had made fortunes snapping up assets in the chaotic years of Boris Yeltsin’s rule following the collapse of Soviet communism.

He was convicted of grave financial crimes in two trials that Kremlin critics say were part of a Kremlin campaign to punish him for challenging Putin, to bring his oil assets under state control and to warn other tycoons to toe the line.

Khodorkovsky had funded opposition parties, questioned state decisions on oil pipeline policy, made allegations of corruption and fashioned an image as an enlightened post-Soviet executive.

Putin had singled him out for bitter personal attacks since his arrest, telling the country “a thief should be in jail” and graphically suggesting Khodorkovsky had blood on his hands, in a reference to the murder conviction of a Yukos security chief.

Khodorkovsky said he would not seek to regain assets of Yukos, the oil firm he once headed which was broken up and sold off after his arrest. Its main production asset ended up in the hands of state oil company Rosneft, now headed by close Putin ally Igor Sechin.

Many observers said the pardon was part of a drive by Putin, who could seek an other six-year term in 2018, to improve his image before Russia hosts the Olympics in Sochi in February.

Khodorkovsky had been due to be released next August but supporters had feared his sentence could be extended, fearing new charges against him. He says he sought the pardon for family reasons.

Asked whether he wanted revenge against Putin, Khodorkovsky said that because his family had been largely left alone, he saw their standoff pragmatically and with little emotion. “And pragmatism does not provide for revenge and hatred.” DM

Photo: Freed Russian former oil tycoon Mikhail Khodorkovsky (C) arrives for his news conference in the Museum Haus am Checkpoint Charlie in Berlin, December 22, 2013. Khodorkovsky, pardoned by Russian President Vladimir Putin after 10 years in jail, said in remarks published on Sunday that he would not go into politics or seek to regain assets of his former oil company, Yukos. REUTERS/Axel Schmidt

Police probe use of water cannon against social grant applicants