Africa for pessimists: 2013 in review 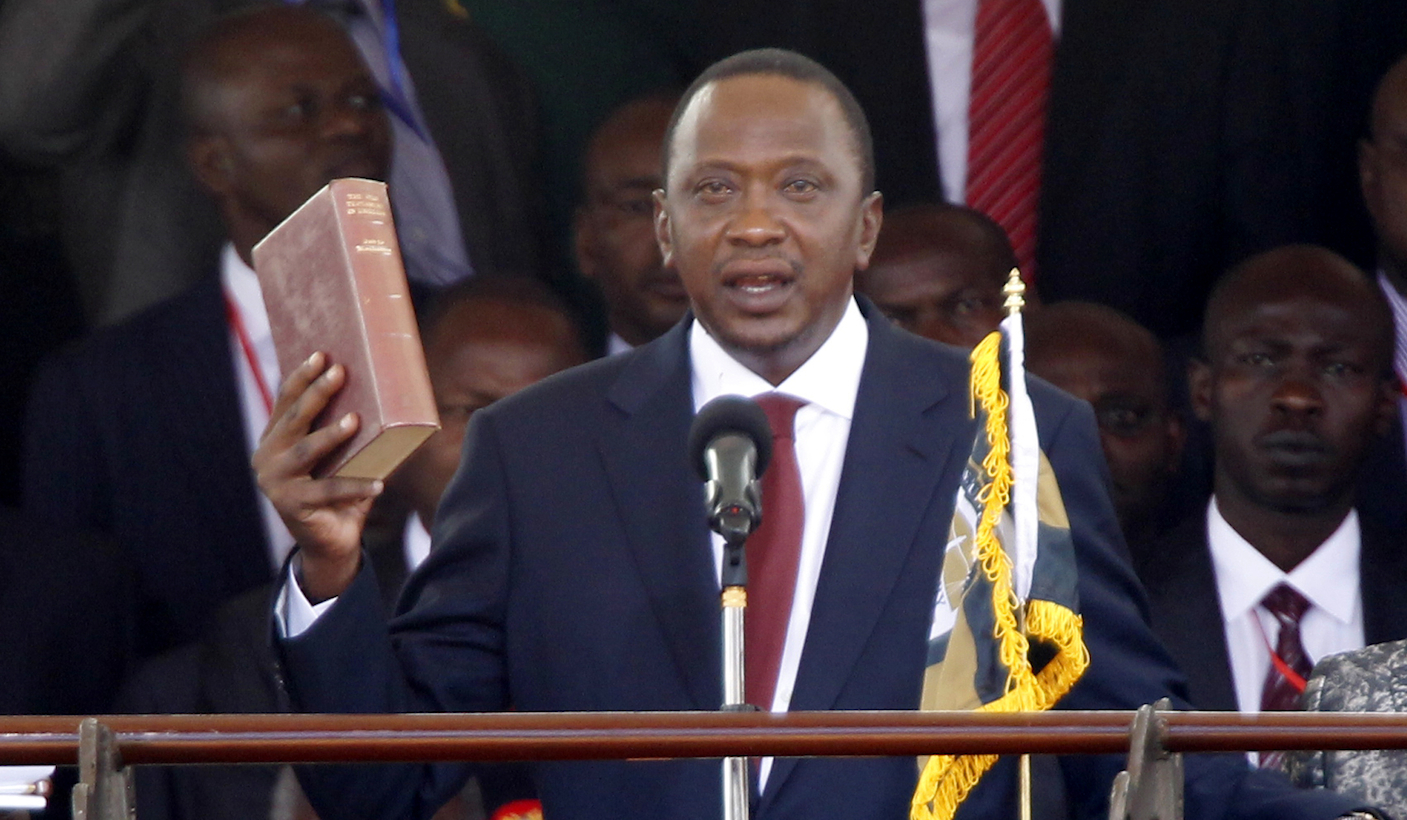 As usual, this year threw up its fair share of bad news, disasters and controversies. SIMON ALLISON explains the stories that have him most worried for the continent’s future.

There was nothing wrong with the Kenyan elections, aside from a few inconsequential quibbles. They were generally considered free and fair, and turnout was excellent (88.6%). The problem came with the result: with a range of candidates to choose from, the majority of Kenyans plumped for the duo of Uhuru Kenyatta and William Ruto – two men united by little except their base pragmatism and their shared experience of being charged with crimes against humanity by the world’s top court.

The pair’s shared infamy comes from their alleged involvement in the post-election violence which devastated Kenya in 2007-2008. Ruto is supposed to have incited supporters of challenger Raila Odinga into the streets, armed with machetes and petrol bombs; Kenyatta is supposed to have done the same for supporters of incumbent Mwai Kibaki. These differences, which at the time proved fatal for more than 1,000 people, seemed to disappear as both politicians realized that the only thing between them and a lengthy stint in a foreign prison could be the power of the Kenyan state. To harness it, they needed to join forces and win the Presidency and Vice-Presidency – and Kenyan voters, in their millions, endorsed their plan.

Having failed to obtain deferments or presidential immunity from the United Nations, Kenyatta and Ruto have quietly run a campaign to discredit the International Criminal Court in Africa. Their biggest success came in October at an extraordinary African Union summit called to discuss the ICC, where the African Union called for immunity for senior officials and the suspension of the trials against Kenyatta and Ruto.

Hollowing out the ICC, as Kenyatta and Ruto are intent on doing, might save their skin in the short term, but it will simultaneously destroy any chance of real justice for thousands of African victims of war crimes and crimes against humanity. That the African Union supports this plan – while failing to offer any real alternative – is a shameful abdication of its responsibilities, which should be to African citizens first and leaders last. Not the other way round.

Read: Oh Kenya, what have you done?, Ruto and Kenyatta stay one step ahead of the ICC and Is there an African alternative to the International Criminal Court?.

Lampedusa and the search for a better life

There is plenty of Afro-optimism going round at the moment, and much of it’s deserved. Speaking very generally, governance is improving, economies are growing and the continent is slowly coming to terms with epidemics of HIV, TB, and malaria. But there’s one statistic that belies this ‘Africa Rising’ narrative: the hundreds of thousands of Africans who risk their life savings, and often their lives, in a desperate attempt to leave their continent in search of a better existence somewhere else.

Photo: The shrouded body of 11-year old Syrian migrant Sayed Mahmoud is lowered into a grave in the graveyard outside the main mosque on the island, in the town of Paola, outside Valletta, November 8, 2013. Two children were among between 50 to 200 Syrian and Palestinian migrants who drowned when their boat capsized 60 miles (97 km) south of Lampedusa in October. (REUTERS/Darrin Zammit Lupi)

Because of the clandestine, often illicit nature of this type of immigration, exact statistics are hard to come by, and the migrants’ stories are rarely told. Until October, when a tragedy of unprecedented scale burst into the headlines. Off the coast of the Italian island of Lampedusa, a boat crammed full of hopeful migrants from Eritrea and Somalia capsized. 360 people were killed and hundreds more injured.

Attention immediately turned to Italy’s immigration policies and whether Italy was doing enough to prepare. This missed the point: the real question is not about where the migrants were going, but about what they were leaving behind; and why they were so desperate to do so. For hundreds of thousands of Africans, their continent is not nearly rising fast enough.

Read: Lampedusa tragedy: We were all Africans once on Daily Maverick.

Central African Republic descends into chaos, but does anyone care?

The United Nations warned two months ago of the risk of genocide in the Central African Republic. Since then, fighting in the country has only intensified – and there has been little in the way of continental or African response. An intervention force from France has arrived in Bangui, but this looks to be too small to be really effective; and plans for an increased African Union operation are still months away from being implemented.

The lack of international interest prompted NGO Doctors Without Borders, which has a substantial presence in CAR, to write a scathing open letter to the United Nations, accusing UN teams in the CAR of actively ignoring people in need and doing nothing but “data collection”.

Meanwhile, some 400,000 people have fled their homes and almost every single one of the country’s 4.5 million inhabitants are thought to be affected by a looming humanitarian disaster. Armed groups, answering to no central authority, are causing havoc in towns and villages, and have been implicated in various human rights abuses including rape, murder and recruiting child soldiers. Worse, the violence is increasingly assuming religious dimensions, as Christians target Muslims and vice versa.

Despite all this, and despite the best efforts of NGOs such as Human Rights Watch, Amnesty International and Doctors Without Borders to raise awareness of the conflict, it has failed to garner much attention. It’s not clear what the short-term solution to the CAR might be – all we know is that the consequences of doing nothing could be devastating indeed.

There is no denying that President Mohamed Morsi – the first democratically-elected President of Egypt – messed up. Instead of governing for all Egyptians, he governed for the bunch that elected him; instead of forging ahead with reforms, he fell back on old-school habits of censorship and intimidation to push through his agenda.

Photo: Muslim Brotherhood leader Mohamed El-Beltagy (R) stands with other senior figures in a cage in a courthouse on the first day of their trial in Cairo November 4, 2013. November 4, 2013. Ousted Egyptian leader Mohamed Mursi and 14 other Islamists face charges of inciting violence relating to the deaths of about a dozen people in clashes outside the presidential palace in December after Mursi enraged his opponents with a decree expanding his powers. (REUTERS/Stringer)

Egyptians deserved more. But they didn’t deserve what came next. In a stunning reversal of all the democratic, progressive gains made in the country since the 2011 revolution, more mass protests in Tahrir Square gave the army – sidelined by Morsi’s government – just the excuse it needed to seize power and crush Morsi and his Muslim Brotherhood supporters.

The generals are in charge again, and they wasted no time in bringing back all the tricks Mubarak’s regime: the blunt repression, the state of emergency, the intolerance of any kind of opposition. This culminated in an orgy of violence that should live long in infamy, when hundreds of Muslim Brotherhood supporters were gunned down in cold blood as they gathered to protest the military coup in a public square in Cairo. Since then, the Muslim Brotherhood has been brutally quashed, its leaders detained and tried; and Egypt is being run by a cabal of unelected, unaccountable military men who were made in Mubarak’s image and rule the country the same way.

Two years after those glorious days in Tahrir Square, Egypt is right back where it started – and, bizarrely, many of the same people who were out in force in 2011 supported the reversal in 2013. Maybe people don’t always know what’s best for them.

Read: Egypt: what happens when ‘the people’ get it wrong and Egypt: Goodbye revolution, hello Saudi-sponsored military state on Daily Maverick.

Westgate and the myth of the Somali renaissance

At the beginning of this year, it was fashionable to talk about Somalia having turned a corner; to go and sip a coffee in Mogadishu and describe a bright, promising future for Africa and the world’s most failed state. It was a seductive myth, but always undermined by the facts: Mogadishu is not Somalia, just a city whose safety is guaranteed only by the presence of thousands of African troops; militant group Al Shabaab still control more territory than the government; and that government is notoriously corrupt and divided amongst itself.

Photo: Civilians escape an area at the Westgate Shopping Centre in Nairobi September 21, 2013. Gunmen stormed the shopping mall in Nairobi on Saturday killing at least 20 people in what Kenya’s government said could be a terrorist attack, and sending scores fleeing into shops, a cinema and onto the streets in search of safety. Sporadic gun shots could be heard hours after the assault started as soldiers surrounded the mall and police and soldiers combed the building, hunting down the attackers shop by shop. (REUTERS/Siegfried Modola)

It took a tragedy to reveal the myth for what it was, however. On 21 September, gunmen entered Nairobi’s Westgate Mall and began shooting. What exactly happened over the next three days is unclear – did the gunmen take hostages? Did they escape? What caused the mall roof to collapse? – but by the end of it at least 72 people were dead.

Al Shabaab immediately claimed responsibility, and said that Kenya had it coming; that this was a justified response to Kenya’s invasion of Somalia which forced Al Shabaab out of its key strongholds. But the attack was also a message to everyone else that Somalia is far from being fixed, and that Al Shabaab remain a potent, unpredictable and brutal force.

The attack was doubly uncomfortable for the Kenyan government because its response was so woefully inadequate. Response teams took 90 minutes to get to the scene, at least one policeman died from friendly fire and attempts to seal off the building failed miserably. Westgate was a national tragedy and a national humiliation at the same time.

Since then, there have been more blows to Somalia’s fragile progress: Doctors Without Borders pulled its staff out of the country after two decades, saying that conditions on the ground had become too dangerous to operate in; and a nasty spat between the President and his Prime Minister resulted in the PM being forced to resign. Somalia’s still got plenty of problems, and misplaced confidence won’t help anyone solve them.

Read more: For a brighter take on 2013, see Africa for Optimists.

The world according to David Mahlobo: everyone is a spy, everyone/everything is being watched, including the State Capture Commission

The Grillroom and Sushi Bar • 08 APR

Sugar tax and the slow crawl out of a health crisis

Mozambique’s Frelimo gambled everything on gas – and lost