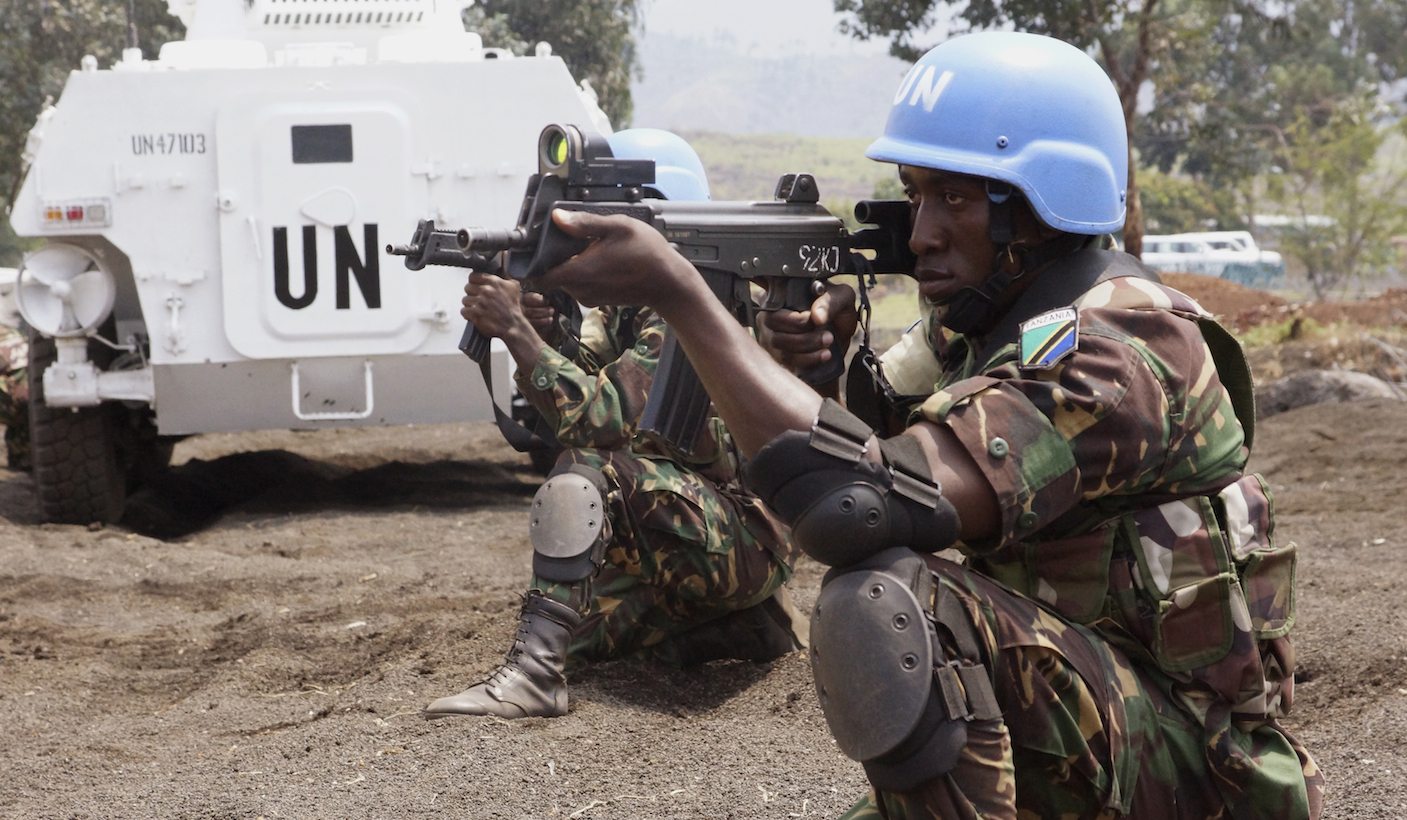 Having successfully mopped up the M23 movement, the United Nations’ pioneering Force Intervention Brigade in the Democratic Republic of Congo is going after more rebels. This time, the FDLR is in the crosshairs, and South African soldiers will once again participate in frontline action. By SIMON ALLISON.

The United Nations’ Force Intervention Brigade (FIB) in the Democratic Republic of Congo is unlike any other UN operation in history. With its unusual mandate, it is allowed to go on the attack against armed groups it deems to be a threat to peace in the region, regardless of whether there is any immediate danger to civilians.

This experimental approach has already proved to be ruthlessly effective against the Rwanda-backed M23 rebel movement in the eastern DRC, which was barely able to put up a fight against the combined might of the FIB and the Congolese army. Their surrender has been hailed as a vindication of the UN’s new peacekeeping strategy, even though everybody acknowledges that the problems in the area run far deeper than the successes or failures of a single rebel group (and even M23’s defeat is still under negotiation, with talks in Kampala stalled over issues of justice and demobilization).

“It’s very important to know that the intervention brigade is one more tool in the mission in order to bring peace to this region. But we need to be very realistic, because it is not the magic solution to all the problems,” said Lieutenant General Alberto Dos Santos Cruz, commander of the UN Stabilisation Mission in the DRC (Monusco), speaking to VOA.

Not least of eastern DRC’s problems is the presence of a plethora of other rebel militias, all of whom are capable of causing varying degrees of chaos.

“Most have taken advantage of and manipulated existing ethnic tensions in an effort to gain control of land and mineral resources, including gold, tin ore, and coltan (widely used in electronic devices). Their alliances, leadership structures, and even names keep shifting. Some have allied with or received support from the Congolese army — itself guilty of perpetrating atrocities, including rape, arbitrary arrests, and the mistreatment of suspected M23 collaborators.”

Of these militias, M23 has been the strongest in recent years, closely followed by the Democratic Forces for the Liberation of Rwanda (FDLR), a motley but dangerous band of Rwandan refugees (some on the run from their role in the Rwandan genocide) and ethnic Hutus, dedicated to their own survival and the eventual overthrow of the Rwandan government. Their existence is thought to be a major factor in Rwanda’s involvement in the conflict in the eastern DRC (that and the region’s vast, lucrative mineral supplies, of course), and the group has a horrendous record when it comes to respect for human rights.

“The presence of the FDLR in eastern DRC has long been Rwanda’s key security concern in the DRC, and has been its public justification for its repeated official and unofficial interventions there,” explains Stephanie Wolters, DRC analyst at the Institute for Security Studies.

“Certainly the presence close by of many of those who were involved in perpetrating the 1994 genocide is a legitimate security concern for Rwanda, although direct attacks and threats have been minimal for a long time.” Wolter adds, however, that Rwanda has not always taken opportunities to eliminate or sideline the FDLR, which has been a useful pretext for Rwandan intervention. “So the question is, does Rwanda really want to see the FDLR eliminated?”

But Rwanda might not be allowed to pull the strings any more. Aware of the FDLR’s significance, Monusco’s Cruz has identified them as the FIB’s next target. The UN is going into battle again. “We have already intensified patrols and observation along the border and we are planning operations against all rebel positions along the frontier,” said Cruz.

This news has direct relevance to South Africa: along with troops from Tanzania and Malawi, there are 1,345 South African soldiers that have been committed by SANDF to the unit. This, however, is likely to be a longer, harder fight than the one which vanquished M23.

Explains Wolters: “The FDLR will definitely not roll over as easily as the M23 did. After nearly twenty years in the eastern DRC, they are far more entrenched there than the M23 was, and they are more widely dispersed, whereas at the time of their defeat, the M23 were concentrated in several strategic locations, making them a much easier target. The FDLR also have very close links to the Congolese communities in which they live. The military operation against the FDLR will therefore have to be very different and is likely to be more drawn-out, more complicated and more dangerous. Add to that the fact that elements of the Congolese army continue to have informal links to many of the FDLR commanders on the ground…this could undermine clarity and purpose.”

In addition, many of the FDLR’s top commanders are wanted in Rwanda on genocide charges – they are quite literally fighting for their life. “Political negotiations between the FDLR and the Rwandan government won’t happen as long as [Rwandan President Paul] Kagame is in power,” said Wolters. “They therefore have very little incentive to lay down their weapons and negotiate with anyone. This means they will fight to the end.” DM