Transformation in cricket: Proteas crying for a black superhero 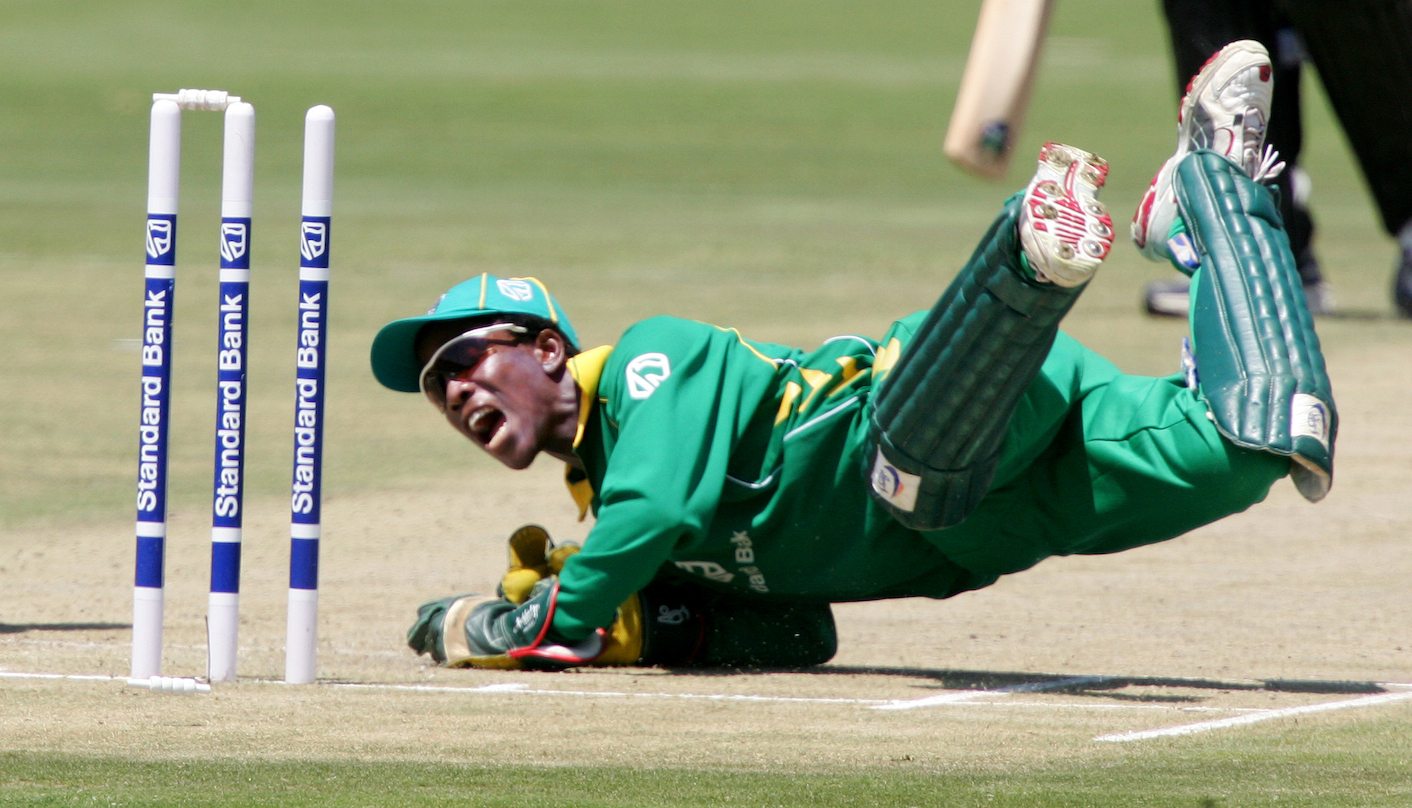 It seems the transformation rod is once again being taken out to beat Cricket South Africa (CSA), with the lack of Black African players at the highest level again being a sticking point. By KEN BORLAND.

This has led to speculation that there will be a recall for wicketkeeper Thami Tsolekile in the first Test against India in Johannesburg next week, with the CSA board allegedly reacting to the pressure being put on them by leaning on the national selectors.

But while the selectors have been happy to retain Tsolekile in the 15-man squad named this week for the two Tests against India, it seems they will reject efforts to push the 33-year-old into the starting line-up.

As usual in the murky world of CSA politics, those wanting to interfere in the job of the selectors are remaining anonymous, but one would guess chief “independent” director, Norman Arendse, is involved because he has shown in the past that he believes his team should be the one representing the country and Tsolekile is one of his favourites.

A cricket team is a delicate sum of its parts and the current management and the selectors believe they have settled on a balance that has not only taken them to number one in the world but can keep them there.

The key is AB de Villiers keeping wicket and, as worthy a player as Tsolekile is of playing Test cricket, one can’t just go “zap” and install him behind the stumps without seriously disrupting the balance of the team and the style of cricket they want to play, according to convenor of selectors, Andrew Hudson.

De Villiers’ glovework has improved to the extent that it is certainly up to Test standard and the extra burden has not affected his batting, which remains a key strength of the Proteas; he has enjoyed a top-class year, scoring 743 runs at an average of 82.55.

“We need to get it clear that AB keeping is not about having seven batsmen. It gives us flexibility, frees up that number seven position, be it for an extra batsman, bowler or all-rounder, which could be very useful when Jacques Kallis retires.

“AB’s wicketkeeping has been fantastic and it gives us an advantage over other sides. To have a competitive advantage – basically an extra player – at Test level is massive. Australia had it with Adam Gilchrist and we are happy to support the team management’s thinking in this,” Hudson said.

Both Hudson and coach Russell Domingo have made it clear that Tsolekile is in the squad in case De Villiers has problems with his back and if the vice-captain is fit then the Highveld Lions stalwart will not be in the starting XI.

“Thami is our reserve wicketkeeper and if something happens to AB then he is our next gloveman in line, as he was in Dubai. But on the day the game starts, we will release two players back to their franchises and he could well be one of those if AB’s back continues to be fine.

“AB has always had a stiff back, whether he’s keeping wicket or not, and we do monitor it, obviously we keep an eye on his workload. But some people say keeping wicket is less physical than diving around at backward point, especially if you’re standing back to seamers all day. AB did have some cramps in Dubai, but that was because of the heat and we’re very happy for him to continue behind the stumps,” Hudson said.

Coach Domingo sang the same tune earlier this week in Pietermaritzburg when the Test squad was announced.

“Thami is the spare wicketkeeper in case something happens on the morning of the game. We don’t want to make wholesale changes and this counts for the balance of the side as well,” Domingo said.

Complicating matters is that Tsolekile has been nursing a niggly achilles that kept him out of the Lions’ Sunfoil Series match last week. It’s been a recurring problem for him and there is a school of thought that he should rather have that sorted out than be rushed into the intensity of Test cricket and risk tearing the tendon, which will end his season.

But while Tsolekile is the best gloveman in the country and has batted well enough for both SA A and the Lions, to suggest he could handle batting at seven in the Test side, his window of opportunity is closing practically with every match Quinton de Kock plays.

The 20-year-old has posted a row of centuries for South Africa in one-day cricket and his dazzling batting has won many crusaders for his cause.

But Hudson pointed out that the selectors have to ensure they make decisions that are for the long-term benefit of one of the best talents produced in this country in many years.

“Quinton has played phenomenally well and there’s no doubt he’s good enough from a batting perspective. But we have a responsibility to be prudent in how we manage him and keeping wicket in Tests is a massive responsibility that we don’t want to rush him into. Plus he’s going to play a critical role in trying to win the World Cup in 2015 and we don’t want to put too many things on his shoulders.

“He doesn’t keep that often in four-day cricket and I would love to see him scoring hundreds and keeping wicket for the Highveld Lions. It might be sooner rather than later then that he’s in the Test squad and he will definitely be on the agenda for the next meeting of the selectors when we choose the squad for the Tests against Australia,” Hudson said.

So there is healthy competition for the wicketkeeping berths in the three formats played by the national team, but what is of great concern is that Lonwabo Tsotsobe, and only in the limited-overs formats, is the only Black African who plays regularly for the national team.

Cricket South Africa polices transformation in the domestic game and this is where they should be focusing their attention, rather than at the elite, international level.

The problem of Black African representation that dogs the national team has its roots in franchise cricket and, in October, CSA decided to adopt a strategy that rewards franchises for playing Black Africans rather than saying they are in the poo for not giving them playing opportunities.

If a franchise plays more than one Black African in more than 70% of their games across all three formats, then CSA will pay them the average contract price of one of those players.

When this incentive scheme was announced at the CSA annual general meeting, CEO Haroon Lorgat revealed the governing body had capital of R14 million in their strategic transformation fund in which to drive the development of Black African players.

While the new strategy should be applauded, it is not progressive enough. Why only pay out for one player? Why shouldn’t a team like the Lions, who fielded three Black African players in two-thirds of their Momentum One-Day Cup matches, be rewarded more than a side like the Titans, who met the target but only used two players in Mangaliso Mosehle and Ethy Mbhalati?

Someone like Corrie van Zyl, who as the general manager of cricket is responsible for the pipeline that develops talent, has been praying for a change of heart amongst franchise coaches when it came to giving Black Africans decent opportunities.

Although the Cobras and Dolphins failed to reach the incentive during the One-Day Cup, Van Zyl believes the coaches of all the franchises are aching to achieve true transformation.

“At our coaches conference in August there was a real sense of willingness to change and what has happened is that there’s been a mindset change. It was very heartening that everyone is on board and it was quite a powerful conference. It wasn’t intentional that it didn’t work out in the past, but sometimes you need to look in the mirror and see that what you’ve done is not good enough,” Van Zyl said.

“We had a real hard look at ourselves and there was a real sense of ‘we can do it’. It’s a matter of the heart now and there’s a real positivity about it.”

A review of the One-Day Cup shows that only a half-dozen Black Africans played in 70% of their team’s matches.

Top-class performers like Tsolekile, Aaron Phangiso and Lonwabo Tsotsobe were away with the national team, but Khaya Zondo, Tumi Masekela, Malusi Siboto, Temba Bavuma, Mosehle and Mbhalati had a mixed bag of success.

Bavuma played in eight of the Lions’ nine matches but averaged just 24. But limited-overs cricket is not really his forte and the diminutive 23-year-old is already averaging 74.25 in this season’s Sunfoil Series.

Mosehle and Mbhalati both enjoyed excellent campaigns, the wicketkeeper/batsman averaging 40.80 with the bat and the lanky bowler taking 12 wickets at an average of 32.50 and an economy rate of 4.76.

The Warriors introduced the most new black faces to franchise cricket, but Luthando Mnyanda, Lundi Mbane and Vuyisa Makhaphela did not enjoy much success.

While the Springbok rugby team have Tendai Mtawarira and Siya Kolisi, the Proteas are crying out for a black superhero. And the sooner he arrives, the better. DM