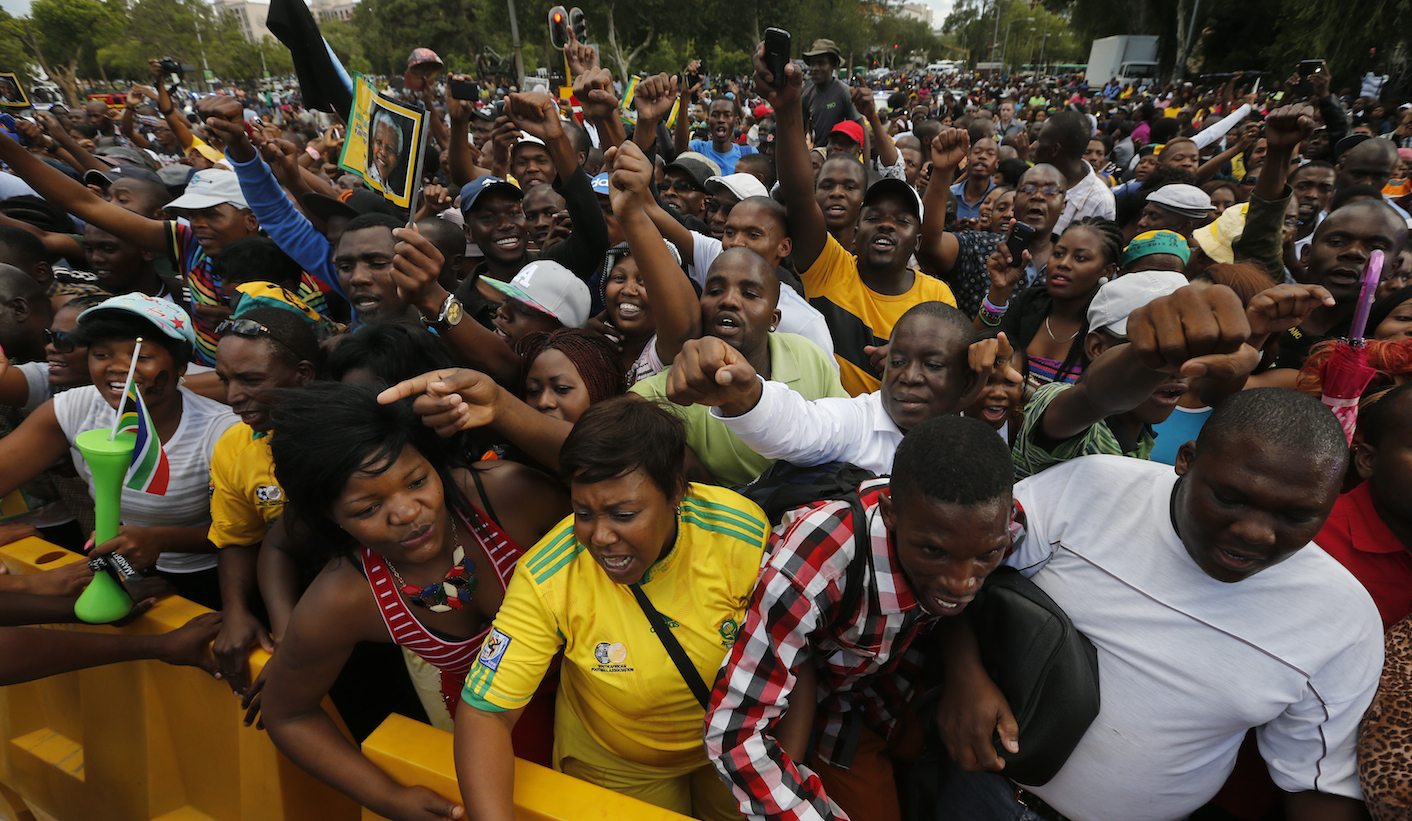 Thousands of South Africans travelled from as far afield as Limpopo to pay their respects to former president Nelson Mandela at the Union Buildings in Pretoria. Standing for hours in queues that moved at snail’s pace, beneath a hot sun, South Africans from all walks of life and various political affiliations stressed the need for unity in South Africa. By KHADIJA PATEL.

The Union Buildings is a mere five kilometres away from the Tshwane Events Centre. But on Wednesday afternoon, the first day of the lying in state of former president Nelson Mandela, the seat of government felt hundreds of kilometres away. Thousands of people stood in a queue that snaked beside the perimeter of an open field, chatting animatedly as they waited their turn to catch a glimpse of the great man.

Some, however, had began the journey to the Union Buildings before dawn. One woman from Benoni had arrived in Pretoria at 06:00 AM only to find the park-and-ride facilities at the Tshwane Events Centre had not opened yet. After driving around the city, she parked her car in a nearby street and walked to the Fountains Valley park-and-ride. Her plan appeared to have worked well, until her bus was turned away at the Union Buildings: The Fountains Valley facility did not mark the fingers of mourners with indelible ink to prevent repeat visitors.

They were then rerouted to the Tshwane Events Centre where they awaited their turn to hop onto a bus to the Union Buildings. And as she grew agitated in the unrelenting heat, increasingly suspicious of queue jumpers, others around her looked on wearily.

An old man dressed in a brown suit, marched beside the queue, attempting an imitation of Mandela’s voice. He tried in vain to capture the attention of someone, anyone in the queue. He failed.

Most in the queue pointedly ignored him.

Undeterred by the lack of attention however, he marched to the back of queue, eager to find someone else to converse with using his Mandela voice. One woman watching him gasped in exasperation.

Where exactly did this queue end?

“I haven’t seen such scenes since 1994 when we went to vote Tata into power,” Stone Phiri, an EFF member from Orange Farm in Johannesburg, whose red beret was easily discernable in a sea of ANC supporters dressed in the yellow regalia of the ruling party, said.

Phiri had been engrossed in a lively debate with a group of ANC supporters ahead of him in the queue. He derided the ANC supporters for fudging the facts in the controversy over the costs of the renovations of President Zuma’s private residence in Nkandla. The ANC supporters accused him of being intolerant of a difference in opinion.

Phiri, however, was politically astute enough to admit that Madiba’s death called for South Africans to unite despite their differences, despite their challenges, indeed, despite the political controversies.

And he was not alone in his expression of disappointment in the calibre of world leaders in comparison to Madiba.

“All those presidents from Africa, from all around the world, they have to learn something from [Madiba]”, Dodo Takoy, a Congolese immigrant living in Johannesburg said. “I don’t know if [any of these] leader pass away if we will see something like this, people celebrating because they see something great in him.”

And about two hundred meters away, Jay Naidoo, who served in Mandela’s cabinet, and Cosatu General Secretary Zwelenzima Vavi had abandoned hope that they would see Madiba’s body on Wednesday. They walked away, vowing to return on today.

Like them, thousands of others abandoned the queue, convinced that they would not get their chance to see the great man one last time.

And on cue, a notice issued from the South African government regretted that the “cut-off for today’s public viewing of President Mandela’s body had been reached”.

“Government welcomes the interest people have showed in wanting to bid Madiba farewell, but we have reached the limit for the day,” the statement read.

For many, the queue was in vain. Some will return today, or Friday and try again. Others left the queue disappointed. They will not be able to come again. They will learn of the sight of the man dressed in the trademark batik shirts from Indonesia from others. Their memory of this day will be this queue and their attempt to get to see him.

And perhaps that will be enough.

Because the queue was not only a forward motion towards the buses. The staccato motion of it almost felt like an expression of something greater. It felt like an acknowledgment of a shared grief, a shared moment in the making of South African history. DM

Photo: Mourners gather behind police cordons after being denied entry to the site where former President Nelson Mandela was lying in state in Pretoria, December 11, 2013. (REUTERS/Mike Hutchings)