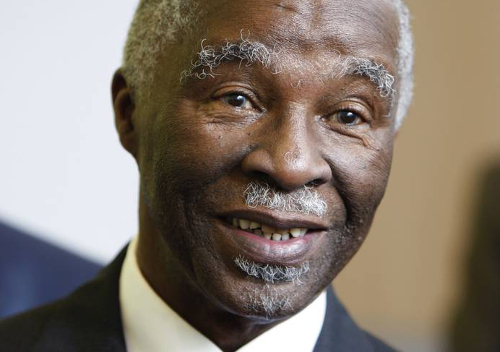 The memorial for Nelson Mandela at Midrand's Calvary Methodist Church started like most others. Dark clouds descended and the rain fell. Anti-Apartheid activist and former Commission on Gender Equality chair Joyce Piliso-Seroke gave a warm anecdote of her time with Madiba. Former President Thabo Mbeki, however, changed the script. It's time to question the country's leadership, he said. No prizes for guessing who he is talking about. By GREG NICOLSON.

Piliso-Seroke gave the tribute so missing at Tuesday’s memorial service. Speaking at the Calvary Church, perched on a Midrand hill perfect for watching the clouds of rain rolling in, she said she first met Mandela in February 1990. Her daughter Michelle had been accepted to the University of Cape Town and begged her mother to accompany her during the admissions process. Piliso-Seroke wanted to be in Jo’burg. Political prisoners were being released; protests were afoot; she wanted to be a part of it.

Against her will, Piliso-Seroke accompanied her daughter and they decided to accept an invitation to stay at Archbishop Desmond Tutu’s home in Bishopscourt. “Put your bags down and help me prepare the house and cook dinner because Madiba will be sleeping here tonight,” Tutu’s housekeeper told them when they arrived. Piliso-Seroke pinched herself, prepared Mandela’s bed, and called her mother to find out Mandela’s clan names.

When they walked through the door, Tutu looked like a dwarf compared to the tall, handsome Mandela. Piliso-Seroke was halfway down the stairs when she greeted Mandela, his first day out of prison, with all of his clan names. Instead of waiting for her to descend, Mandela climbed the stairs, got her name, and cited all of Piliso-Seroke’s clan names in response.

“And that was Madiba. He immediately calmed me down and it felt like home,” she told the church congregation on Wednesday night. He was such an influence on her daughter that Michelle decided not to accept a scholarship to study in America the next year because she wanted to be a part of the new South Africa. “May Mandela’s spirit rest in peace,” said Piliso-Seroke. May we emulate his example.

The church was enthralled by her account and her use of humour. Mbeki, who must have a story or two hundred to tell about Mandela, continued to joke with the crowd when he took the podium, but he took a different approach. He had two messages: while honouring Mandela, we must also remember the generation of leaders he fought alongside and we must question the current leadership of the country.

The first point is clear. “He is an outstanding individual from an outstanding generation,” Mbeki said on Mandela. He did not, however, talk much about SA’s first democratic president. Instead he read a 1957 quote from Chief Albert Luthuli, one that would have been printed on placards this week if it were Mandela who said it. He remembered Mark September, son of Reg, who recently recalled growing up without his father who was busy in the struggle. He spoke about the Rivonia Trial collective, those who spent many years in prison (Mbeki’s father Govan spent many, many years behind bars) and the unsung heroes who were abused, tortured and killed for following their convictions.

Children must not only learn about Mandela but the generation of leaders who established the values of the anti-Apartheid movement and the country’s current constitution, argued Mbeki. “Freedom in our lifetime,” they said in the 1940s, and they achieved it.

The country and the world are celebrating Mandela but Mbeki wants to see action. People “can’t just celebrate and then go home and say, ‘I celebrated.’ What do we do about these things that we are celebrating?” Apartheid’s legacy is still with us, with continuing poverty and reconciliation remaining a dream rather than reality, he said. “It can’t be that national reconciliation exists in the ability to drink tea together,” Mbeki told the crowd, who gave him a standing ovation.

Things got political and politics have largely been exempt from memorial proceedings thus far (until Tuesday, of course). On the one side, Mbeki is contesting with being the president after the saintly Mandela. On the other, is President Jacob Zuma, who ousted Mbeki at Polokwane and is criticised as a kleptomaniac.

“I’m saying, while we are celebrating the life of Mandela and all the others and paying tribute, there were people who made enormous sacrifices in their lives. This is a generation that bequeathed to us many values. I think principal among these values that they bequeathed the people is to service the people, not to serve themselves,” said Mbeki. The church erupted with applause.

South Africa’s leadership falls under President Zuma. There was little doubt in the church, especially as the congregant next to me kept muttering “e-tolls”, that a day after Mbeki received a huge applause at FNB Stadium and Zuma was repeatedly booed, the former president was suggesting that Zuma does not uphold the values of Mandela, his generation, or the many who sacrificed their lives in the struggle for freedom. Perhaps this is reading too much into Mbeki’s comments, but his continued focus on the need to educate South Africans and our leaders didn’t reflect well on Zuma.

Nor did his remarkable skills with the crowd. While Zuma gave a disappointing speech on Tuesday, Mbeki held the church audience in his hand. He engaged the crowd, offering R9.99 for anyone who could identify Luthuli’s quote. When a note was passed to him saying the speakers in the overflow area were not working he told the crowd it said, “You’re speaking too much and must shut up.”

But he could have delivered this speech at any time. He has (mostly) held his tongue. Both the death of Mandela and the reception at Tuesday’s memorial seem to have given him cause to enter the fray. He remembered one anecdote which might speak to many ANC leaders. Bram Fischer, who defended the accused in the Rivonia Trial, once mentioned to him the accused’s decision not to appeal if they received the death penalty. The people won’t allow it, was their reason. “I don’t know whether you have the same courage,” Fischer told Mbeki about his generation.

As we are mourning Mandela, Mbeki hopes we can hold onto those convictions and show the courage we so obsessively espouse – the ideals, he suggests, Zuma fails to uphold. DM