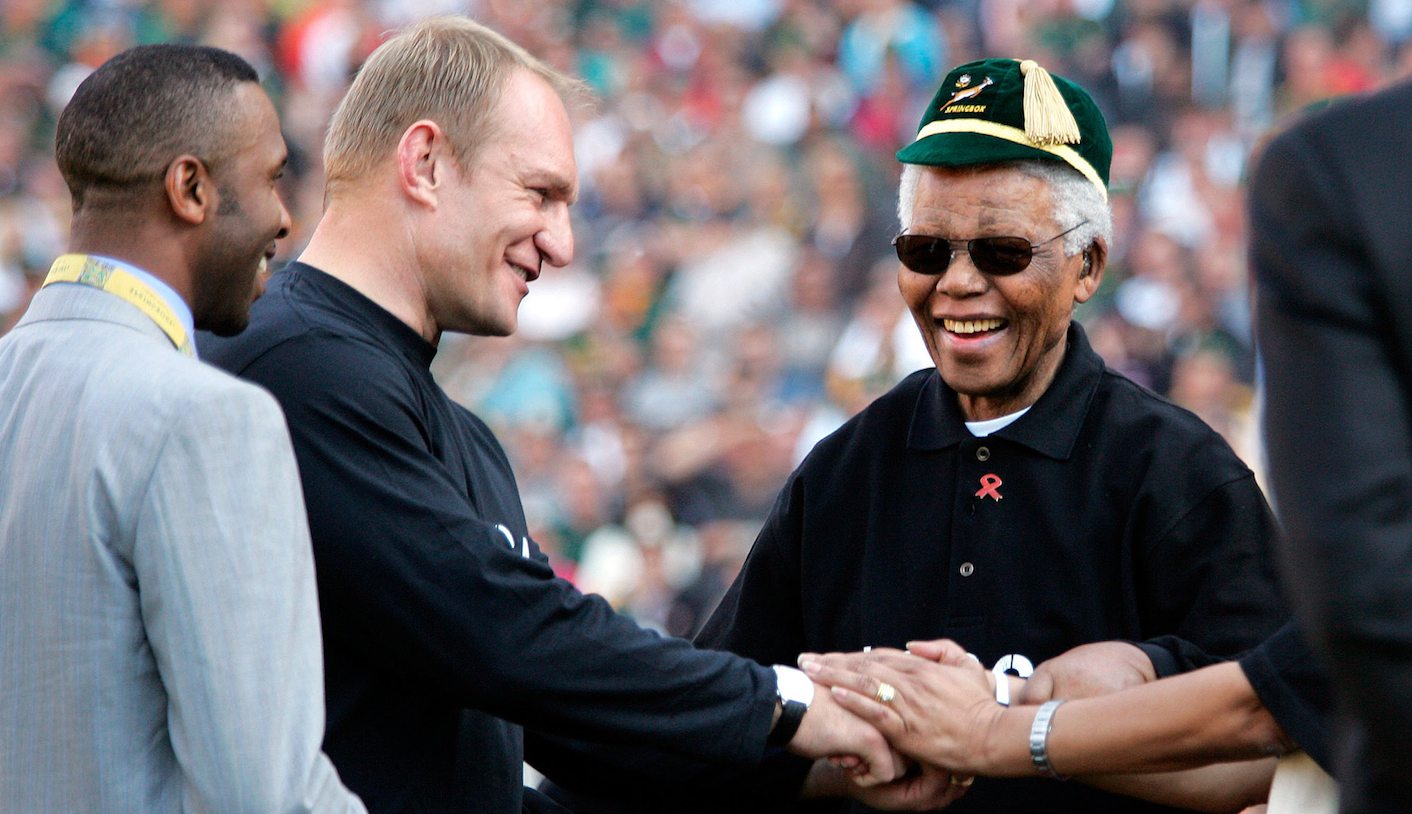 Former rugby World Cup winning captain Francois Pienaar paid tribute to Nelson Mandela at Cape Town’s memorial on Wednesday. Although his speech was hardly ground-breaking, it was befitting and touching without being pretentious. BY ANTOINETTE MULLER.

Ask any South African which sporting photograph is most symbolic and most memorable to them. Most will respond: Francois Pienaar and Nelson Mandela sharing the stage and the Rugby World Cup trophy in 1995. Mandela, wearing the Springbok jersey, in itself a symbol of oppression and a reminder of the fractured society, the galling indiscretions and the blatant discrimination created by the Apartheid government was, like so many other things, blessed with Mandela’s reconciliation.

When sportsmen across South Africa, and indeed the world, were paying tribute to Mandela over the last few weeks, many mentioned that moment at the Rugby World Cup.

On Wednesday, at the Madiba Memorial, Cape Town edition, Pienaar gave a poignant speech remembering the father of the nation. It was honest, relevant and another reminder of sport’s importance in uniting a nation and Mandela’s understanding of its importance in society at large.

Pienaar started off talking about the brutal human rights violations during Apartheid before he recalled his meeting with country’s former president.

“As the leader of the Springboks, I had the opportunity to meet the father of our nation. My life changed forever,” Pienaar recalled.

Pienaar reiterated the importance that sport has in society as a whole. What many might see as just a game does have the power to bring people together and over the past 20 years in South Africa, it has. From the joy of winning the Rugby World Cup twice, the despair of a Protea choke, the delight of a Simphiwe Tshabalala opening World Cup goal and many, many other memories, few things bring people in South Africa together like sport. It would be arrogant to say that sport is more important in South Africa than anywhere else in the world, but in some cases, it is.

“As a sportsman himself, a skilled boxer, Madiba recognised that sport has the ability to transcend culture, religion, creed, race and nationalities. Sometimes, it’s just a simple game, but often sport is much, much more than that. It’s full of life’s lessons and can teach us about joy, failure, winning and losing, about hard work, respect, discipline, team spirit, humility and selflessness,” said Pienaar.

The former Springbok captain also recalled the decision to keep the Springbok symbol and how, despite the undertones of that jersey, the team was still able to come together as a nation and the country was able to celebrate as one, despite being in its infancy as a democracy.

“Madiba urged his comrades to keep the Springbok emblem. Fortunately, they obeyed their fearless leader’s request. We became one team playing for one country. Late in the afternoon on 24 June 1995, a nation celebrated like never before. In the true spirit of Ubuntu, for the first time ever, we were all champions together. I will never forget how proud Madiba was, and his beautiful smile,” Pienaar added.

Alongside sport, though, Pienaar also recognised the importance of education and how it forms one of the cornerstones of building a great nation and will drive the nation forward. He used Mandela’s example once again, to remind the crowds – cheering for his words at regular intervals – how important education is.

“A herd boy became one of the greatest leaders the world has ever seen. From prisoner to president, he educated himself on this extraordinary journey. His quest for knowledge was insatiable. Education is the most powerful weapon to change the world,” he said.

For Pienaar, the greatness born out of education will all be brought together through the country excelling in sport.

“The next generation of leaders are studying at our schools and universities across this beautiful land. We are a nation alive with possibilities. Quality education will allow us to fulfil our potential. Excellence in sport will again unite us.”

As the country continues to mourn and the world mourns along with it, Pienaar once again extended condolences to the Mandela family and the country’s “spiritual coach” and ended with a simple thank you.

“On behalf of the sporting teams and sports stars across our country, our deepest condolences to the Mandela family. Our heartfelt thank you, to our spiritual coach and our captain. A flower that blooms in adversity is the most beautiful and rare of all. Madiba mastered his fate. As a nation, we must be the captain of his soul. Our president, our example, thank you Tata,” the coach said.

He ended by leading the packed crowd at the Cape Town stadium into a rendition of Shosholoza and although, like most things in Cape Town, it took some time to get going, once it got going it was bone-chillingly beautiful.

Pienaar’s words might not have been the most profound, but they were incredibly apt and very true.

South Africa is a nation which has overcome many struggles and which sporting teams have excelled, even though they still have a long way to go in terms of transformation. Yet small success stories and the pride of the performances on the field have brought the nation together time and time again.

Sport is not going eradicate poverty, it’s not going to build schools and fill libraries, it’s not going to ensure that houses are built or people have access to running water. But sport has been and will continue to be an instigator for brief moments of unity and in a country which has been so destructively fractured, and that’s a damn good start. DM