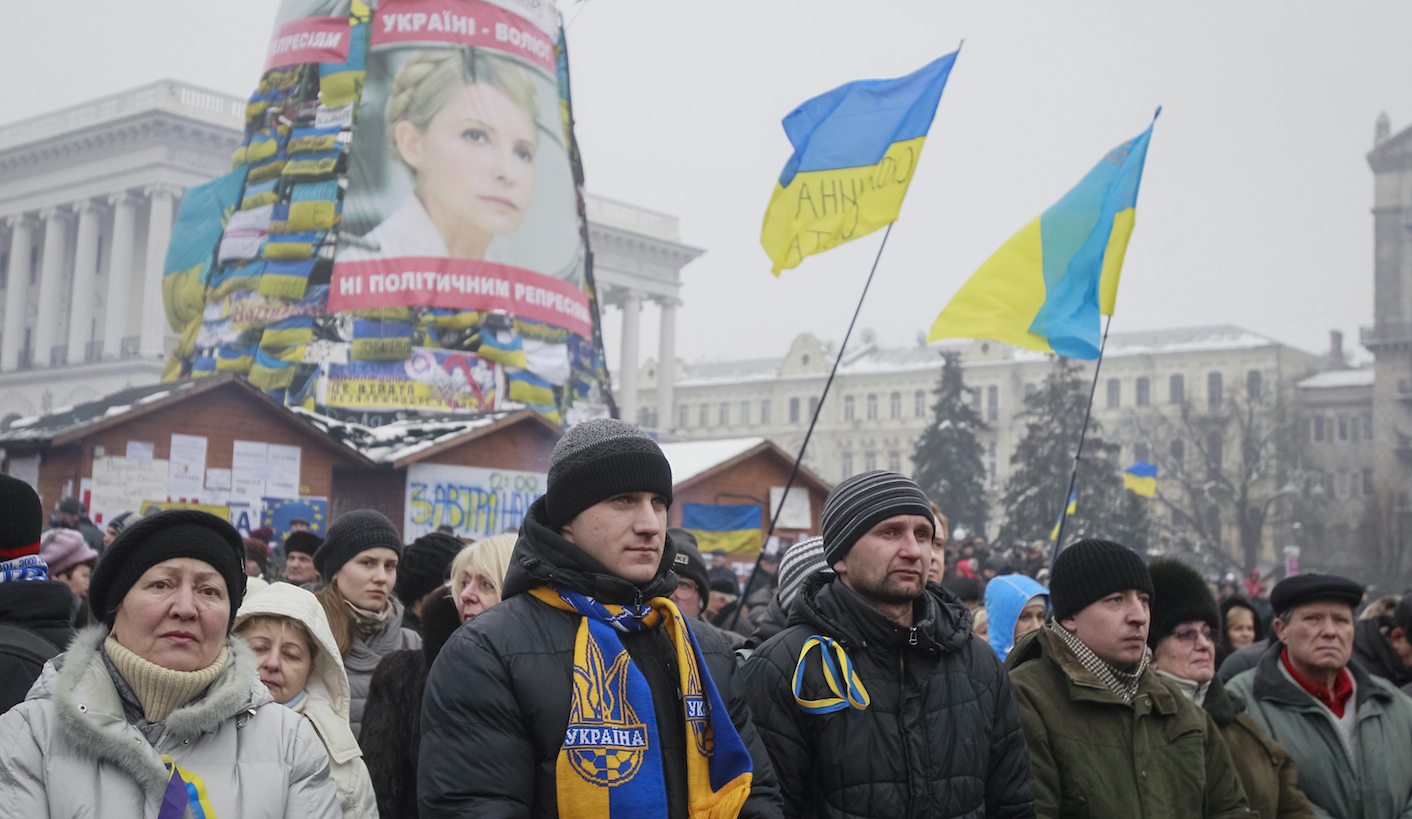 Thousands of anti-government protesters gathered in central Kiev, rebuilding barricades torn down by police, on Thursday as the European Union held out a promise of increased aid for Ukraine if it signed a trade and cooperation pact. By RICHARD BALMFORTH

Ukraine’s first deputy prime minister, Serhiy Arbuzov, flew to Brussels with a high-level delegation seeking billions of Euros of aid from the EU in return for signing the agreement, which Kiev suddenly backed away from last month.

He said Ukraine, which is on the brink of bankruptcy, would “soon sign” the accord, but declined to provide any date.

EU enlargement chief Stefan Fuele pledged more aid to Kiev if it signed the agreement, and to help it negotiate a loan from the IMF, but gave no figures.

“We need to help Ukraine to restore rapidly the confidence not only of its citizens, but also that of international investors and creditors as a stable and predictable economy,” he told reporters.

Ukraine’s Prime Minister Mykola Azarov was quoted as saying on Wednesday he had asked the EU for 20 billion Euros ($27 billion) in aid to offset the cost of signing the EU deal.

A sudden decision by President Viktor Yanukovich on 21 November to walk away from a trade-and-political agreement with the EU and revive trade with Ukraine’s old Soviet master has brought hundreds of thousands on to the streets in a chain of weekend rallies, each one larger than the one before it.

Russian President Vladimir Putin, concerned protests could yet induce Yanukovich to seal the trade agreement with the EU to Moscow’s detriment, painted a picture of a secure future for Ukraine in a Russian-led alliance.

“Our integration project is based on equal rights and real economic interests,” said Putin, referring to a customs union with Belarus and Kazakhstan which he plans to develop into a political and trading bloc to be known as the Eurasian Union.

“I’m sure achieving Eurasian integration will only increase interest (in it) from our other neighbours, including from our Ukrainian partners … I hope that all political sides can successfully reach an agreement in the interests of the Ukrainian people,” he said in a state-of-the-nation address.

A decision to sign the EU deal after all would be likely to infuriate Moscow.

European officials are in discussion with the IMF, the World Bank and other major financial bodies on ways of helping the ex-Soviet republic should it decide to sign the free-trade agreement with the EU after all.

Putin had threatened to respond to such a deal with economic sanctions against Ukraine, which has huge debts and unpaid gas bills outstanding with Moscow. Ukraine’s ultimate decision could be decisive to Putin’s Eurasian Union plan.

Battalions of riot police withdrew on Wednesday from a protest camp in central Kiev after moving against demonstrators in the early hours in an angry confrontation.

But more people were streaming into the snowbound capital for the weekend to boost the 10,000 or so crammed onto Independence Square, focal point of the unrest. About 70,000 extra people from three areas of western Ukraine alone were heading for the capital, citizens’ protest groups said.

Demonstrators have re-built barricades, torn down by police, using public benches, metal barriers and wire-netting to fence off the square, known simply as the ‘Maidan’ in the revolutionary lexicon.

The protests began as pro-Europe demonstrations but have now morphed into a broader show of street anger against perceived corruption and sleaze in the country Yanukovich has led for nearly four years.

After his talks with Arbuzov, Fuele said that, if Ukraine gave a clear commitment to sign the deal, the EU would prepare a roadmap for implementing the accord.

If Ukraine signed, the EU was ready to help it by topping up IMF loans and stepping up financial aid, Fuele said.

EU aid to Ukraine would only get “bigger and bigger” if it signed the agreement, he said without giving figures.

Arbuzov was joined in Brussels by the ministers of finance, economy and revenue and duties, and the central bank head.

At stake is the future of a country of 46 million people, torn between popular hope of joining the European mainstream and the demands of Russia, which controls the flow of cheap natural gas needed to stave off bankruptcy.

After Yanukovich met Putin on 6 December, Azarov said the two sides had agreed a strategic partnership.

Some believe that Yanukovich may sign a series of agreements – almost certainly bringing cheaper gas for Ukraine and possibly credits – in Moscow on 17 December.

The crisis has added to the financial hardship of a country on the brink of bankruptcy. The cost of insuring Ukraine’s debt against default has hit four-year highs.

It now costs more than $1 million a year for five years to insure $10 million in Ukrainian debt over that term, reflecting high default risk.

The most Brussels has so far offered is 610 million Euros in macro-economic assistance. DM

Photo: People attend a rally to support pro-European integration at the Independence Square in central Kiev, December 12, 2013. Ukrainian protesters stood their ground after a sweep by riot police and their leaders dismissed an offer of talks from a president they say must quit for favouring ties with Russia over the European Union. (REUTERS/Gleb Garanich)