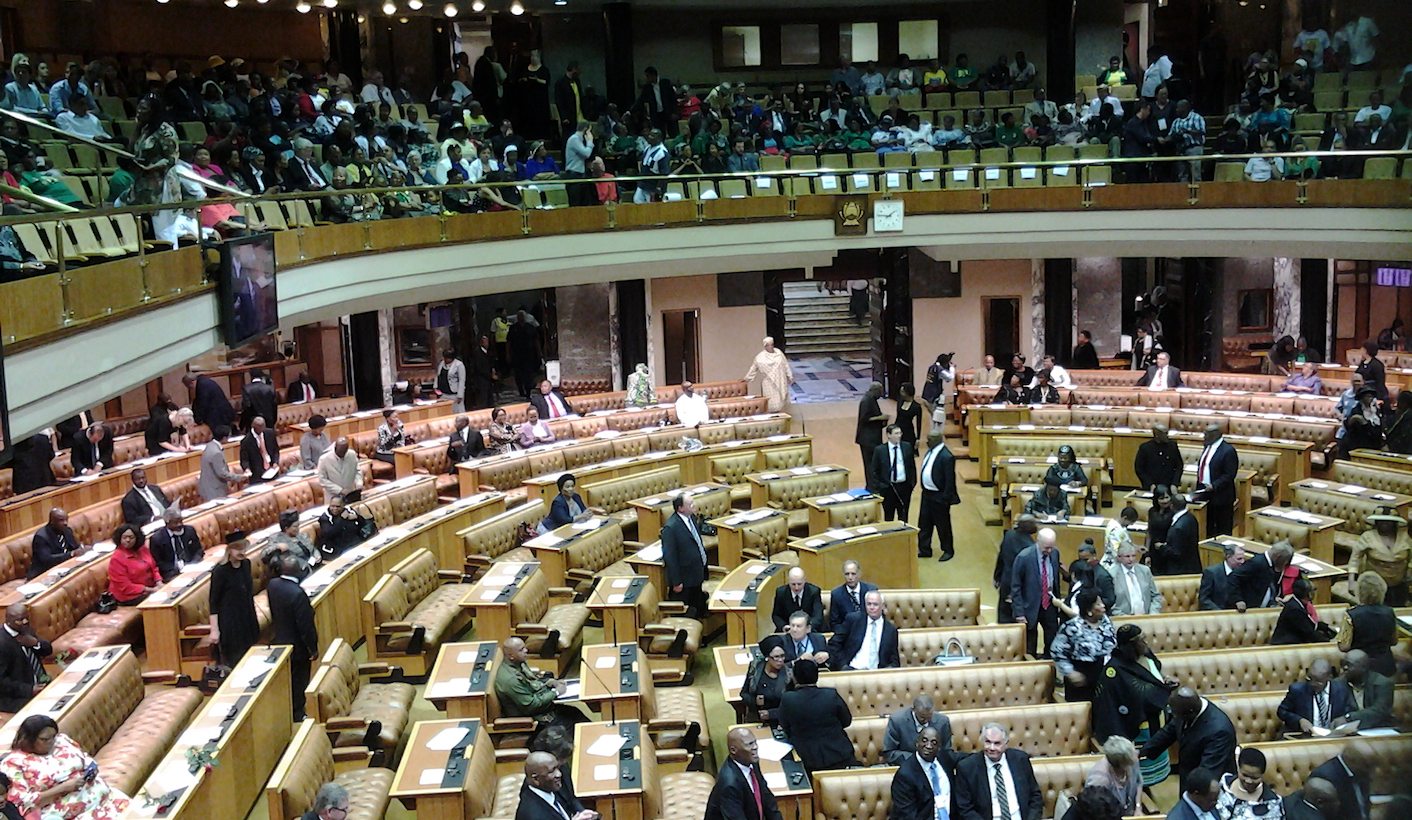 If only Parliament could be more like it was on Monday, every week: alive with members of the public thronging the walkways and queueing to take their place in the public gallery. They were there to place roses before to a flame of remembrance; to write messages on a commemorative wall; but most of all, to hear politicians from across the spectrum pay tribute to a man who changed South African politics forever. By REBECCA DAVIS.

“It has been a life. Such a life!” It’s hard to know how better to put it than Deputy President Kgalema Motlanthe did, concluding his words of tribute to Nelson Mandela in Parliament’s special Joint Sitting on Monday afternoon. It was to Motlanthe, rather than President Jacob Zuma, that the duty fell to open the Parliamentary session. Though it’s said that there was nothing untoward about this, with Zuma merely having his hands full with the deluge of visiting heads of state, there may be those who experienced relief to see Motlanthe doing the honours rather than Zuma, at a time when his presidency is mired in controversy.

But a mere four days after Mandela’s death, this was still no time for politicking, and the Parliamentarians who took the lectern by and large respected this, giving dignified, appropriate responses. Indeed, it’s no exaggeration to say that the best of Parliament was on display; from the organisational efforts made by the institution’s staff (who had reportedly been up past 4am the night before hoisting banners and screens) to the Parliamentarians themselves.

A fellow journalist who has spent much time over the past few days reviewing footage of Mandela’s time in Parliament commented on how different the Parliamentary atmosphere seemed at that time; that although things were frequently tense and volatile, there was more of a sense than ever seemed the case since that what Parliamentarians were engaged with was fundamentally a communal project for the good of the nation. In death Mandela proved again what a unifying figure he was, evident in the words of respect and love paid to him by politicians from all the major parties.

Spare a thought for the family of former opposition leader Colin Eglin, whose funeral – also on Monday – was inevitably overshadowed by the ongoing Mandela mourning. But it was appropriate and generous that Motlanthe began his address by paying tribute to Eglin, “a man with deep roots in South African liberalism”, and to another recently-deceased MP, Reggie September. “It would seem as if Madiba said to both Eglin and September ‘you will never walk alone. I am right behind you’,” Motlanthe said.

While defining Mandela as representing “progressive African nationalism”, and as standing for “the African claim to historical agency”, Motlanthe was also at pains to reflect and acknowledge Mandela’s wider symbolism, beyond our national or even continental borders. “What is possible and desirable is to look at the meaning of Mandela’s life for us as South Africans, Africans and indeed the whole world on which he has left a deep and enduring impression,” Motlanthe said.

And he did not shy away from the challenges that face anyone who must take up the mantle of South African leadership after such a man. “If we fail it will not make sense to future generations that while Mandela emerged from the mist of history to evolve into a rugged moral force that edged humanity a notch higher on the plane of civilisation, those who followed him either failed to live up to the dictates of the philosophy he advocated or simply destroyed his dream,” Motlanthe warned.

“History will impose judgement on us in terms of whether we uphold the laws of the land, fight scourges that rob the masses of our country to whose socio-political freedom Nelson Mandela had committed his life,” he continued. “This means showing intolerance to pathological conditions such as theft of public resources through corruption, abuse of political power and a host of other underhand means that rob everyday people of the meaning of freedom.”

It was a sober, reflective, statesmanlike address, and the Parliamentarians who followed echoed his tone. DA leader Helen Zille – an unusual figure in Parliament, but her presence reflected the uniqueness of the occasion – also highlighted the “enormous responsibility” of those who must attempt to continue Mandela’s work. Unsurprisingly, opposition politicians dwelt more on the gulf between Mandela’s vision and contemporary South African society: the PAC’s Alton Mphethi condemned ongoing poverty, unemployment and landlessness, while saying that the “moral values of this society have gone down”, and calling for the crime of stealing from the public purse to be viewed as treason. Mpethi also called for the release of eight Azanian People’s Liberation Army (APLA) members, still in jail, as a tribute to Mandela.

The most coolly-received address of the afternoon was delivered by IFP leader Mangosuthu Buthelezi, who took advantage of the platform to express a considerable amount of personal bitterness and victimhood on behalf of the IFP. “Even at the height of the campaign to destroy me, Mr Mandela himself showed integrity,” Buthelezi said, to hoots from the audience. He could not resist reminiscing about the day on which Mandela made him Acting President, neglecting to mention the little episode which saw him promptly order a military intervention in Lesotho. When Speaker Max Sisulu cut him off, informing him that his time was up, it was to general relief.

DA Parliamentary leader Lindiwe Mazibuko was the only Parliamentarian to speak from the position of a generation too young to have engaged with Mandela’s presidency in personal ways – a category which now applies to the majority of South Africa’s youthful population. “Unlike the vast majority of the honourable members in this House today, I never had the privilege of meeting President Mandela,” said Mazibuko, who is 33 years old. “I am from a generation which bore witness to South Africa’s transition from oppression to freedom, but was not old enough to participate in it…We are the grateful beneficiaries of all that President Mandela stood for.”

It fell to Justice Minister Jeff Radebe, who served as a minister under Mandela from 1994 and in every subsequent administration, to wrap things up. He did so with great poignancy. (Sitting in the public gallery was Radebe’s wife Bridgette, joined by her brother, billionaire Patrice Motsepe.) It is Maya Angelou who seems to be emerging as the poet of the hour, but Radebe chose to quote Whitney Houston in an R Kelly-penned song, I Look To You, and as he read out a few lines, he was overcome by emotion.

Radebe’s speech was marked by great lyrical beauty and power in its own right, invoking the heroic style of an imbongi. “From the loins of Gadla Henry Mphakanyiswa and the girdle of the Nosekeni of the Nkedama of the amaMpevu clan, you were born to lead the nation and the world,” Radebe said. “In your veins coursed the royal blood of Mqhekezweni, where you defied your noble station in life to be a ploughboy, a wagon guide, a shepherd who rode horses, shot birds and jostled with other boys in stick fighting. I speak of you as a man who chose to be ordinary.”

Like Motlanthe, Radebe did not shy away from questions of succession and leadership. “There are now stark questions that many people are asking about the African National Congress, as we are laying you to your eternal rest on Sunday,” he said. “The first of these is whether the African National Congress will ever be the same again”: a question which Radebe stopped short of positing a direct answer to.

But Radebe, too, was in the business of a universalist discourse on Monday: “I stand today to proclaim to the world that although you were ours in the African National Congress, there are many who have claimed you as their own hero too.”

The truth of this was evident in the messages left along Parliament’s memorial wall. People from Poland, Namibia, the US, China, the DRC and others had queued to enter the Parliamentary precinct to leave their tributes to a truly global figure. “The people from Burundi, we remember Nelson Mandela,” read one message. “On August 28 2000 in Tanzania you reached a peace agreement for Burundi.”

With the Parliamentary session convened, many of the guests who had packed the public gallery stayed around. There was a palpable reluctance to move on, and the mood was celebratory. As South Africans do in times of mourning, they sang and danced. “The Baobab has fallen,” Radebe said. “But a pledge we make to you, Mr President, is that as a nation, we will keep on walking.” DM

Photo: Scores of people were seen queueing outside Parliament in a bid to get a seat for Monday’s special sitting of Parliament in honour of Nelson Mandela. Many were left disappointed as the National Assembly public gallery already started filling up well ahead of the 2pm sitting (Picture:SAPA)