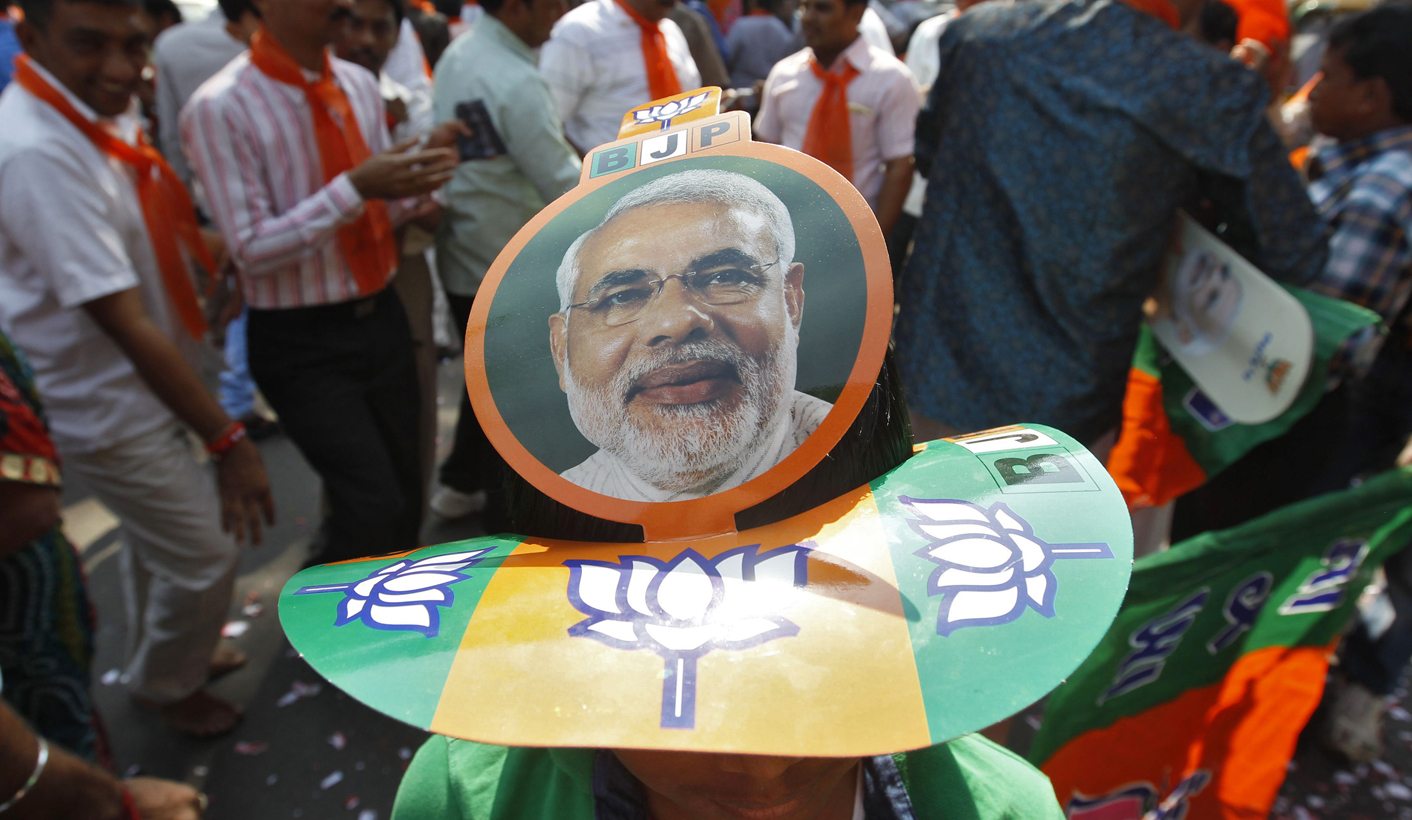 India's ruling Congress party has a very big problem, and his name is Narendra Modi. By Sruthi Gottipati and Mike Collett-White.

With no more than five months to go before nearly 800 million people choose their next leader, the prime ministerial candidate for the main opposition party has seized the initiative through rabble-rousing speeches at huge rallies across the country.

Results from local elections in four states, announced on Sunday, suggest Modi, chief minister of economic powerhouse Gujarat in the west of the country since 2001, has helped galvanise his Hindu nationalist Bharatiya Janata Party (BJP).

With most votes counted, the BJP retained Madhya Pradesh and ousted Congress in Rajasthan, while the state of Chhattisgarh was on a knife-edge.

In Delhi, the BJP is set to be the biggest party, with Congress pushed from first to third place by an impressive debut from the anti-corruption Aam Aadmi Party.

The outcome fell short of the BJP’s most bullish predictions, and represented a vote of no-confidence in Congress as much as one of confidence in Modi, but it was a humiliating blow that the opposition candidate will ruthlessly exploit.

Congress has floundered in the face of the Modi phenomenon. It is unsure how seriously to take him, undecided on what to do next and hampered by a presumptive leader who has lacked his challenger’s charisma, leaving the party drifting at a crucial juncture.

Senior figures within Congress – in power for the last nine years, and historically the dominant force in Indian politics – have long dismissed Modi as irrelevant.

“Modi has come in a flash and will go in a flash,” said one influential party member in a recent interview.

“Congress has been here for 128 years and will survive god knows how many hundreds of years more,” he added, in a now-familiar refrain from the party’s top brass.

That argument is becoming harder to sustain.

But as Congress fumbles for a response, one name dominates debate at the party’s slightly shabby headquarters in the leafy centre of the capital: Rahul Gandhi.

Vice president of Congress and scion of a dynasty that has towered over Indian politics since independence, the 43-year-old is the obvious choice to rally his party and unite voters by playing up its secularist agenda and social welfare schemes.

Rahul’s mother, Sonia, Congress president and the power behind Prime Minister Manmohan Singh, will also play a key role in the party’s election strategy and campaigning, although younger leaders see Rahul as their figurehead.

If only it was that simple.

Congress insiders familiar with Rahul’s thinking have expressed concern over his preoccupation with long-term reform of the party, something they say is important and necessary but could prove costly given the more pressing matter of elections.

“My frustration is that he is too forward-looking,” said Jairam Ramesh, minister of rural development and one of the most outspoken figures in the Congress leadership.

“He’s talking of structure, systems; he’s talking of building up Congress in the long term, whereas we are now faced with fighting an election in the short term,” he told Reuters last month.

However, even if they could persuade Rahul to focus fully on the 2014 vote, party officials wonder if pitting him against the crowd-pleasing Modi in a one-on-one contest would be wise.

Even if Congress wins, the 81-year-old Singh is expected to step down as prime minister after the election.

Modi has deliberately sought to turn the 2014 election into a presidential-style race between himself and Rahul by projecting his personal achievements and convictions over those of the BJP, and by mercilessly goading the Gandhis.

In his speeches, Modi ridicules Rahul by calling him “shehzada”, or “prince”, highlighting his opponent’s privileged upbringing that contrasts strikingly with his own roots as the son of a tea-seller.

There is method in his mockery. Congress has traditionally enjoyed support among the poor, due to farm subsidies and food handouts, and so Modi is targeting its core vote.

Rallies and media debates have been light on policy so far.

Modi has highlighted his pro-business credentials in Gujarat, and sees his economic record as a way of tapping into India’s aspirational masses who are growing impatient over what they see as stagnation, complacency and endemic corruption under Congress-led governments since 2004.

Both Gandhis have boasted of their successes in welfare. But they have avoided playing one potentially strong card for fear of appearing to exploit mistrust among India’s sizeable religious minorities of Modi’s Hindu nationalism.

That suspicion dates back to 2002, when Hindu mobs killed more than 1,000 people, mostly Muslims, in the state of Gujarat, shortly after Modi became chief minister there. Modi, 63, denies accusations that he could have done more to prevent the clashes, or that he encouraged them.

In a sign that the gloves may finally be coming off, however, the Congress-led coalition said last week it would seek to pass a long-delayed communal violence bill that would increase central powers over states’ handling of such unrest.

Congress leaders say the party may not identify its candidate for prime minister until after the election, which is expected to be held some time in April.

That would allow Rahul to campaign alongside his mother, protecting him to some extent and drawing on Sonia’s authority and experience in the run-up to the vote.

Beyond fears that Modi would win a confrontational campaign, which analysts expect to become increasingly nasty the closer the election gets, Congress insiders also believe it might help promote the BJP in regions where its footprint is negligible.

Congress is banking on the opposition failing to win many votes in the south, for example. To set up the election as a Gandhi-versus-Modi duel might erode that advantage.

Now that state elections are over, India’s political parties can focus on the big prize, the Lok Sabha – parliament’s lower house – where 272 seats are needed for an outright majority.

Few expect either of the main rivals to get anywhere near that total, meaning regional parties will again be instrumental in deciding who rules the world’s biggest democracy.

In terms of coalition building, Congress has the advantage, political analysts say, because Modi is such a divisive figure.

They estimate that the BJP needs to win at least 180 seats, compared with 116 in the last election in 2009, to build enough momentum to convince non-traditional partners to join, underlining the scale of Modi’s task.

For Modi, thoughts of partnerships are premature.

He wants to project a statesman-like image across India to reach regions where the BJP has long been weak, using rallies, covered extensively on news channels, and an elaborate social media strategy that has eclipsed that of Congress.

Congress, meanwhile, is waiting for Modi to trip up. As he moves on from populist rhetoric, he will be more prone to mistakes, says Ajay Maken, chief media manager for Congress.

“I personally feel … that Modi has already peaked. And we have not started yet.” DM

Photo: A supporter wearing a cap carrying a picture of Gujarat’s chief minister and Hindu nationalist Narendra Modi, the prime ministerial candidate for India’s main opposition Bharatiya Janata Party (BJP), attends the celebrations outside the party’s headquarters in the western Indian city of Ahmedabad December 8, 2013. India’s Congress party was headed for a bruising defeat in key state elections, including in the capital, early results showed on Sunday, underlining the struggle it will face to cling to power in a national election due by May. The centre-left party’s main opponent, the Hindu nationalist BJP, was the clear winner in three big states that went to the polls, though with the count still on it was a neck-and-neck race in a fourth. REUTERS/Amit Dave