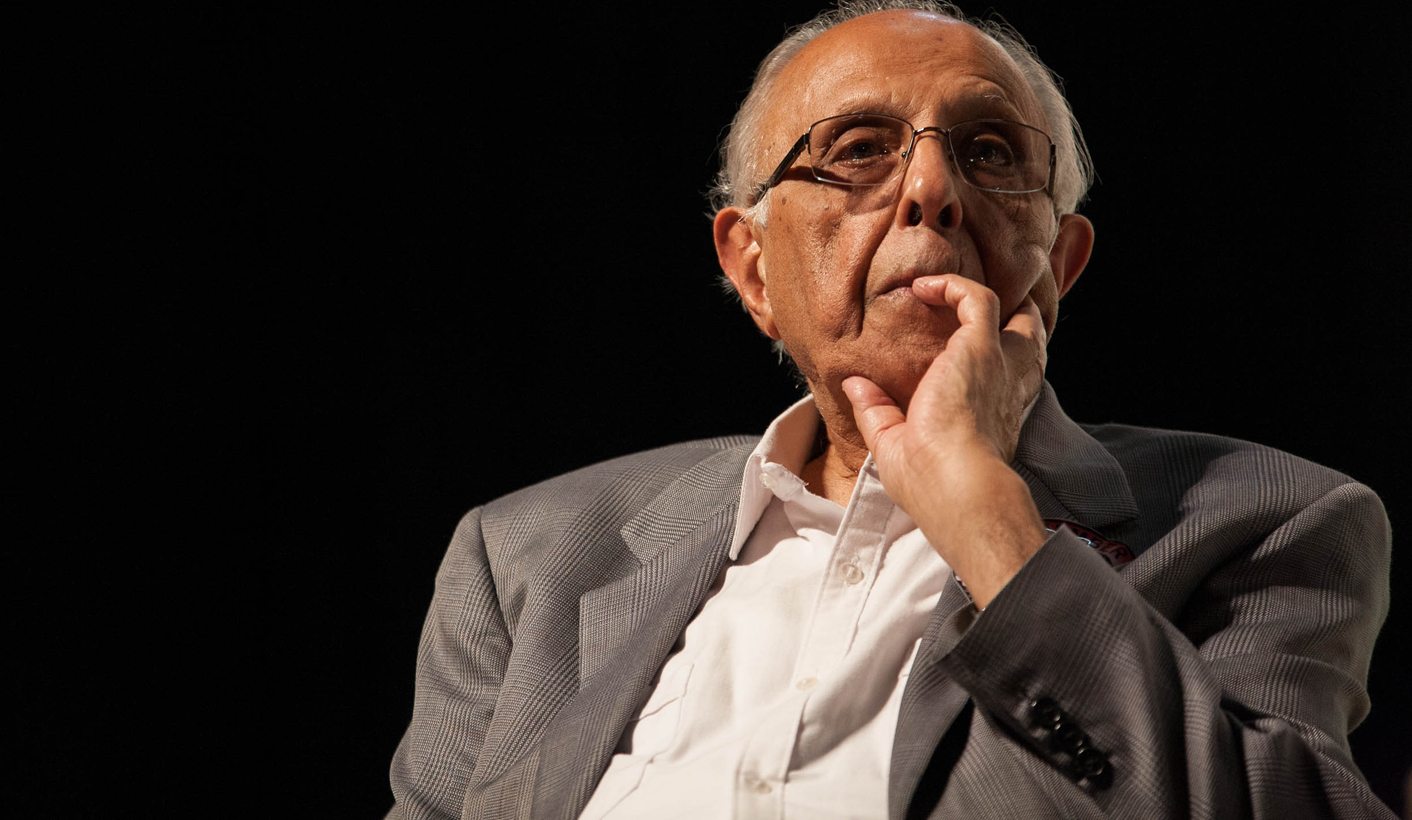 “I was in awe of him,” struggle stalwart Ahmed Kathrada says about Nelson Mandela when he first encountered him as a 16-year-old; 68 years later, he still is, and his grief at the passing of his friend is profound and discernable. But together with fellow Robben Islander, Laloo Chiba, they remembered and celebrated the life of their comrade and friend in the best way they could – by sharing with the world the stories of their time together. Their banter and anecdotes were tender, sometimes funny, occasionally shocking and deeply moving. The memorial service hosted by the Ahmed Kathrada Foundation was one of thousands of prayer and remembrance events for Madiba on Sunday as the world continues to honour his legendary life. By RANJENI MUNUSAMY.

Former president Nelson Mandela sent a note to his friend and comrade Ahmed Kathrada four years ago. It read:

Our warmest congratulations on the occasion of your eightieth birthday. We have spoken often of the long road we have travelled together.

But Madala, you would agree that to find ourselves still going strong after nearly a decade into the twenty-first century is extraordinary. Your friendship has been a great resource to me in good times and in bad.

We join with South Africans and many friends abroad in celebrating your life and acknowledging the many contributions you have made to the struggles for justice in our country.

Happy birthday Kathy. May the years ahead bring you good health, and at least some rest in the midst of your many continuing projects.

Since Mandela’s passing on Thursday night, Kathrada has had none of the rest his friend wanted for him. The world’s media has been interviewing him as one of the few surviving leaders of the golden generation of the ANC which Mandela led. Even as Madiba was drawing his last breaths, Kathrada was at a colloquium talking about his life and legacy. For Kathrada, it seems as if the best way for him to pay tribute to his friend is to share the story of their journey together with others.

While prayers and memorial services were taking place across the country on Sunday, the event hosted by the Ahmed Kathrada Foundation at the Gandhi Hall in Lenasia was a rare peak behind the walls of Robben Island when it quartered South Africa’s liberation struggle royalty. Kathrada, together with Mandela, Walter Sisulu, Govan Mbeki, Andrew Mlangeni, Billy Nair, Elias Motsoaledi, Raymond Mhlaba and Dennis Goldberg were sentenced to life imprisonment on Robben Island when the Rivonia Trial ended in June 1964. Laloo Chiba joined them in the B Section of the prison a few months later after he was sentenced to 18 years’ imprisonment.

The common traits of most of the B Section veterans is their penchant for debate and teasing each other. Sunday’s memorial service was no different, with Kathrada and Chiba each wanting to talk about different issues and taking playful jibes at the other. Kathrada told how Chiba, who was in charge of transcribing the manuscript of Mandela’s autobiography The Long Walk to Freedom to microscopic shorthand, was a “very thorough chap”, even destroying a transcript because of a “blemish”. Chiba corrected him to say the transcript he destroyed because of the blemish was actually from Sisulu’s book, not Mandela’s.

Kathrada related how when he was in solitary confinement for six months, Chiba smuggled in a book to him. But to Kathrada’s eternal exasperation, the book was about horrible diseases, which he was forced to read.

But it was their tales about Mandela that brought their emotion to the surface. Kathrada told about how he could wear long trousers but Mandela had to wear shorts, as Africans were seen as inferior and called “boys”. He was also allowed more sugar than Mandela and while he received a quarter loaf of bread every day, Mandela was only allowed to have bread after 10 years.

When the famous Rivonia trialists were taken to Robben Island chained to each other, Kathrada says the first thing Mandela told them was they were no longer leaders. Decisions and policies were left to those who were on the outside. “Our duty was to concern ourselves with prison conditions and there was to be no preferential treatment,” Kathrada said. Mandela turned down privileges offered to him and even turned down an offer for early release after 13 years, provided he went to live in the then Transkei.

Kathrada’s voice broke and tears welled up in his eyes as he talked about the fortitude of Mandela and Sisulu. He said despite their wives and children being harassed, detained and sent into exile, “they never allowed their personal problems to get in the way of their responsibility towards us. Every prisoner must be looked after.”

He also spoke of how Mandela provided exceptional leadership, especially during the Rivonia Trial. The famous speech from the dock in which Mandela pledged to fight against black and white domination, and said he was prepared to die for his convictions set the tone for the others on trial.

“The implication of that was if any of us take the witness box, we should take our cue (from Mandela’s speech)… Proclaim your political beliefs, don’t apologise, don’t ask for mercy. If there’s a death sentence, we will not appeal. That’s how Madiba was exemplary in whatever he did. He led from the front. No matter what the risks, he was right in front,” Kathrada said.

Chiba told of a sports tournament they organised on Robben Island where they arranged for the prisoners to play chess, darts, bridge, scrabble and table tennis against each other. Mandela, who learnt to play chess from a book and mastered the game, was playing against Salim Essop. They were evenly matched. Mandela got into a “war of attrition” with Essop. “He sits and wonders, so much so that Salim actually got fed up”. Essop decided to forfeit the game. These wars of attrition were one of Mandela’s “weaknesses”, Chiba said.

He said there were constant struggle between authorities and prisoners to crack their morale. “We refused to be crushed… People like Madiba, Walter and Kathy (Kathrada) were right at the front to absorb the blows. And they never take the credit,” Chiba said.

At the end of the memorial service, other struggle veterans joined Kathrada and Chiba on stage for a group photograph and the singing of the national anthem. It was a moving sight as many were frail but tried to sing the anthem with gusto. A picture of Madiba looked over them.

Earlier in the day, President Jacob Zuma, Winnie Madikizela-Mandela and other members of the Mandela family attended a church service at the Bryanston Methodist Church. Addressing the congregants, Zuma said Mandela’s passing was an “unprecedented loss” for the country.

“He preached and practised reconciliation… Mandela distinguished himself for good things and good things only,” Zuma said.

His predecessor Thabo Mbeki was much more expressive in his commentary. Speaking at the Oxford Synagogue in Killarney on Sunday evening, Mbeki asked whether South Africa had the quality of leadership that was exemplified by Mandela and others to respond to current challenges.

He said South Africa had rightly been asked to celebrate Mandela’s life instead of just mourning it. “But I don’t think we should end there, we must also ask ourselves a question: What about the future? I think as we celebrate the life of Nelson Mandela, this becomes a central task, to ensure we do not betray what he and others sacrificed for.”

In the dearth of political leadership in South Africa, the precious voices and wisdom of the golden generation of elders are sorely needed. But they are fading now and the few that are left behind are frail and weary.

If there is anything the tremendous celebration of Nelson Mandela’s life and legacy should achieve, it is to open the eyes of those who walk in the footsteps of the great elders of the liberation struggle. DM