The man behind Cape Town’s poo protests - but who doe...

The man behind Cape Town’s poo protests – but who does Andile Lili represent? 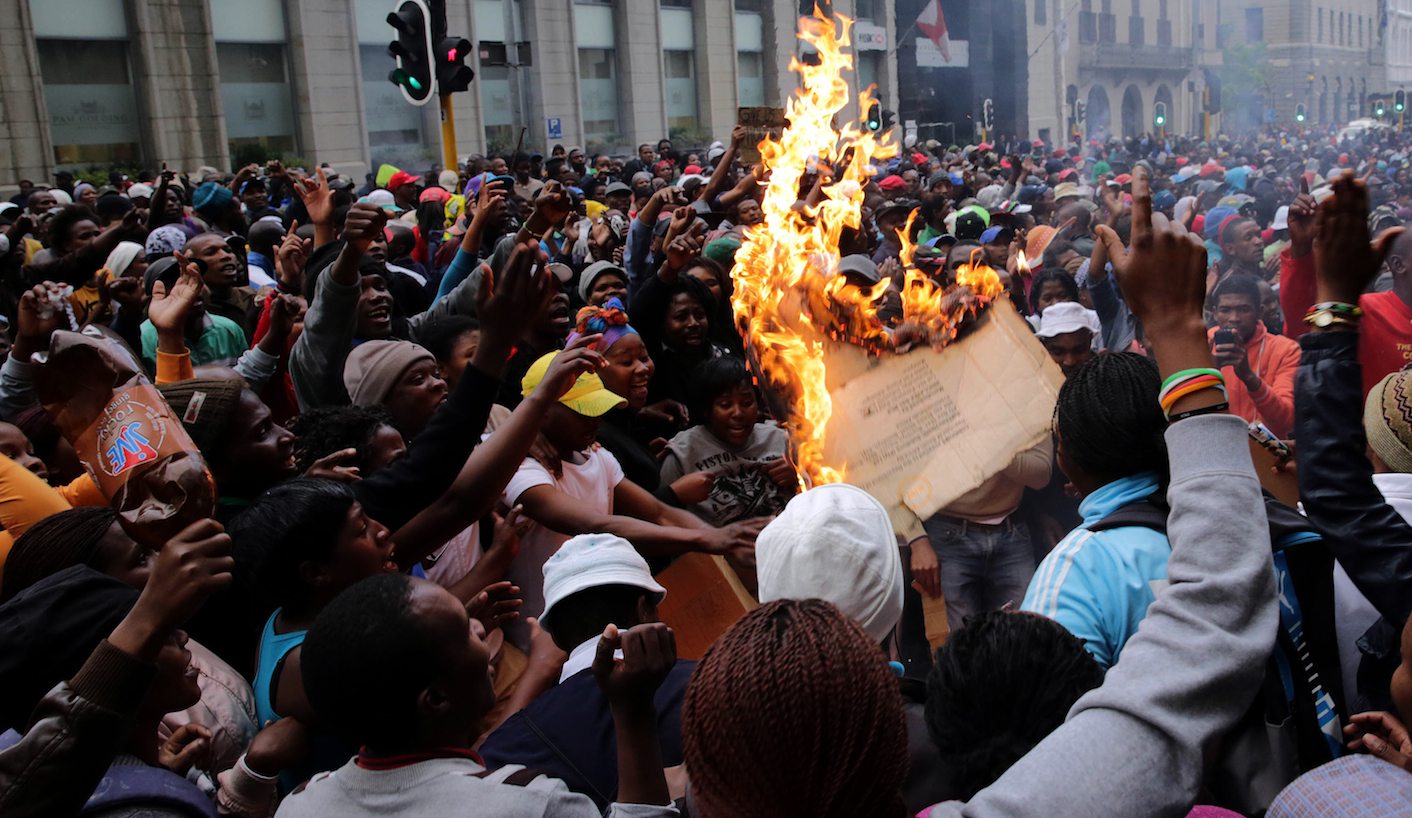 Expelled ANC councillor Andile Lili was at the helm of the October protests in Cape Town which led to violence and looting. Two further protests scheduled for the last few days were cancelled following the refusal of the City of Cape Town to grant permits, and the intervention of religious leaders. Lili now says that if they don’t reach an agreement with Western Cape Premier Helen Zille by the end of January on issues like housing and sanitation, she can expect a “radical” march in February. There’s no love lost between Lili and the ANC, so who is he representing? By REBECCA DAVIS.

Andile Lili and his sidekick Loyiso Nkohla (another ANC councillor) came to most people’s attention in early June this year, when they led a group of people who dumped faeces on the steps of the Western Cape provincial legislature to protest Khayelitsha residents’ inadequate sanitation. Lili later said he had been inspired to take up the cause after encountering a family of five in Khayelitsha living in a four-metre shack using a portable toilet. On 25 June, Lili and six others took the faeces stunt to Cape Town International, allegedly emptying containers of the stuff inside the departures terminal. The ‘poo protesters’, as they were quickly dubbed, face charges under the Civil Aviation Act, which could carry up to 30 years in jail time.

Lili has spent quite a bit of time in courthouses this year, even before the poo-dumping. In 2011, still an ANC councillor, he was found guilty, after a disciplinary hearing, of having made derogatory remarks to a Khayelitsha resident whom he allegedly instructed to “give birth in a drain or a bush”. He was also allegedly involved in the illegal demolition of homes in Khayelitsha. After being sacked in March this year by Local Government, Environmental Affairs and Development Planning MEC Anton Bredell, Lili appealed the matter in court. In late November, a High Court judge found that the decision to expel Lili was justified. Lili intends to appeal this decision too.

Lili’s suspension offence allegedly wasn’t an isolated incident: it is claimed that it wasn’t the first time that Lili had made derogatory comments to Khayelitsha residents. But despite this, the man certainly seems to have a following. Township residents apparently raised R14,000 to pay the bail of Lili and his six poo-dumping colleagues. At October’s march of thousands through Cape Town, it was Lili who had the ear of the crowd – and they obeyed his instructions to leave the provincial legislature (albeit under duress from police).

The DA normally blames this kind of unrest on a conscious provincial destabilisation campaign by the ANC. But there can be little doubt that there is no love lost between Lili and ANC leadership at the moment, as Lili made clear to the Daily Maverick in an interview on Tuesday. When asked if he was still an ANC member, despite being axed as an ANC councillor, Lili replied: “It’s not for me to say I am a member of the ANC. The ANC does not regard me as a member. They are not supporting me.”

Lili said that ANC leadership nationally was spreading lies that he had become a member of the Economic Freedom Fighters – a charge Lili adamantly denies. “I have never been a friend of Malema,” he said. “I don’t have the intention of joining another political party. Politics are only benefiting the few. Why must I join politics again? If I am expelled, I must stay fighting for rights.”

Lili is affiliated with a group called the Cape Town Informal Settlements Organisation. He describes his supporters as “backyarders”, hostel-dwellers and township residents who are frustrated by a perceived lack of attention paid to the needs of the poor. These supporters, he suggests, are largely apolitical, in the sense that they do not see themselves as mobilising under the flag of a particular political party.

“These people are not talking about politics,” Lili said. “People are fed up with politics. All they want is service delivery.”

Lili claims too that there is growing anger among his community at the leadership of the ANC in the Western Cape – though it’s clear he has a personal axe to grind here to do with his dismissal. “I hate [Western Cape ANC leader] Marius Fransman,” he said openly. “People are suggesting that Fransman and Songezo [Mjongile, Western Cape Secretary] will be attacked if they come here because they believe they are working with the DA. They are very angry when it comes to the leaders of the ANC…They will be judged by the members.”

In a press conference in Khayelitsha on Monday, Lili and Nkohla told journalists that Premier Helen Zille could expect a “big march” in February if she did not respond to their demands with practical plans by the end of January. Their primary demand is land.

“The offer we are expecting is to offer us a huge piece of land where they can accommodate about 100,000 people who are without housing,” Lili told the Daily Maverick. One of the sites which he suggested could be appropriate to fulfil this need would be the Mowbray Golf Course. “That has about 6,000 hectares. That alone could accommodate a huge number of people.” Lili said that there were similarly appropriate sites, owned by the City of Cape Town and the Department of Public Works, in Bloubergstrand, Wynberg and Khayelitsha.

Lili claims that they are capable of marshalling more than 250,000 participants for upcoming protests, though this is doubtless exaggerated, since similar claims were made before October’s march. He says he “cannot predict” if further looting might take place.

“Should the government respond with urgency, then I don’t see people being violent,” he said. “If people stand there in the CBD waiting for more than four hours, they will be angry. It’s not even anybody’s intention to loot. Those people [in October’s protest] were hungry and frustrated.” He also says that stall-owners, who bore the brunt of the last violence, will be warned in advance to stay away. “If they are warned, they must respect that people are angry and living in bad conditions.” Lili suggested that stall-holders were in a far cushier position than protesters, though this was not the impression given by stall-holders to the Daily Maverick during the last protest.

In calling off the most recent marches, the intervention of religious leaders like Archbishop Desmond Tutu seems to have been critical. Lili says he now hopes “negotiations” will proceed. Though he speaks of the DA as the “enemy”, he says they are targeting the Western Cape government rather than national government simply because “we live in Cape Town. We are Capetonians.”

From their side, the DA has pointed out that the group has already been granted a lengthy engagement with Human Settlements MEC Bonginkosi Madikizela.

Andile Lili may well be talking up a bigger game than he is capable of delivering on. But his evident support is interesting. His stated animosity with the ANC means that the DA cannot easily dismiss these protests as part of the ruling party’s destabilisation campaign, as they have been wont to in the past. It also points to a growing protest movement in South Africa – Abahlali baseMjondolo being another case in point – which falls outside the structures of formal party politics and focuses mainly on frustrations around land and housing. That’s a development that all the major parties would do well to take note of. DM