Hubris: Alive and well in Washington and Pretoria 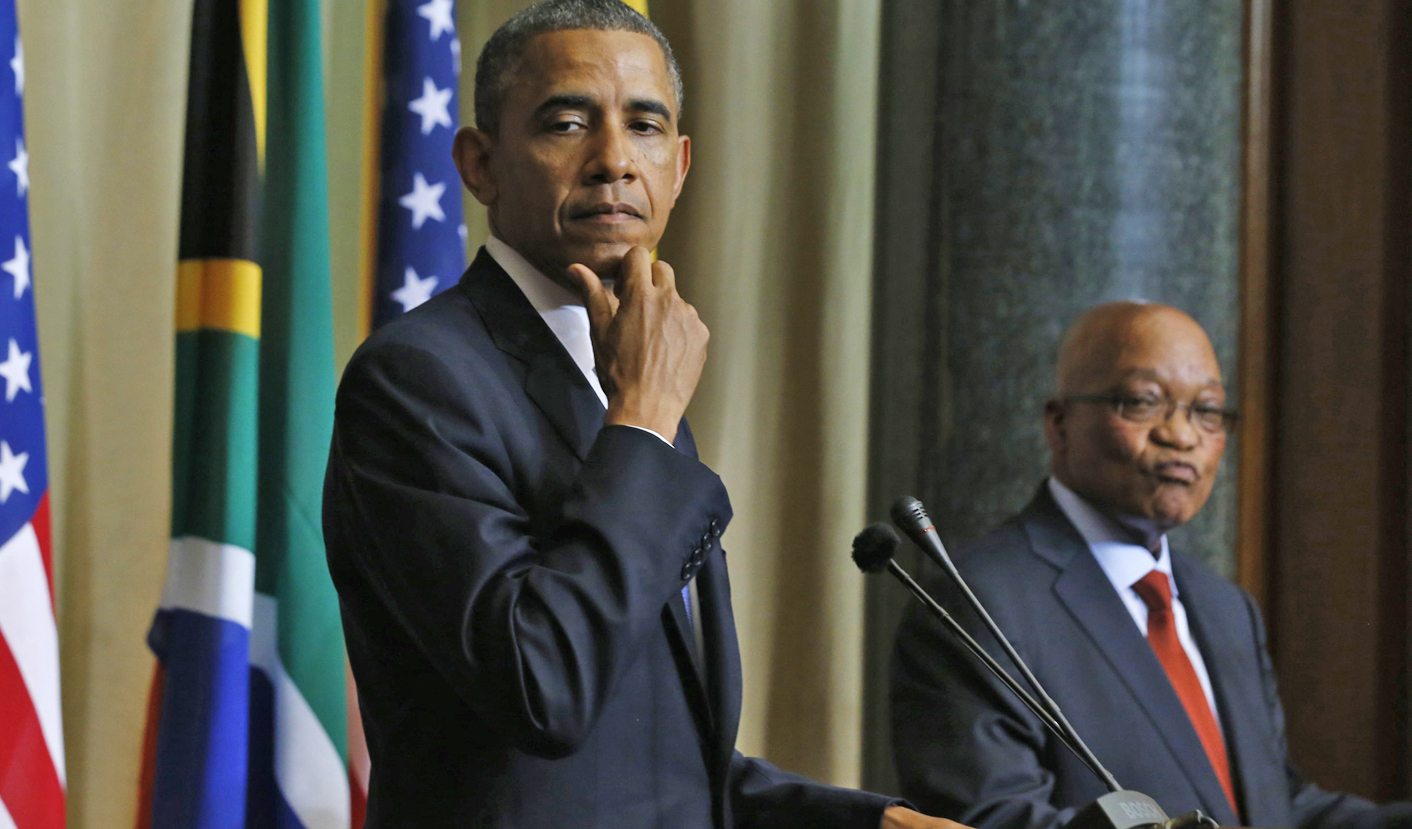 “And on the pedestal these words appear: ‘My name is Ozymandias, king of kings: Look on my works, ye Mighty, and despair!’ Nothing beside remains. Round the decay Of that colossal wreck, boundless and bare The lone and level sands stretch far away.” -- Ozymandias, Percy Bysshe Shelley

One of the primary functions of a government – pretty much any government – is to create and manage projects and programs for the benefit of its citizens as efficiently as possible. Right at the core of such responsibilities is the preservation of a sufficient social order and stability that the country’s economy functions and that the nation’s legal system has predictable outcomes.

Historically, political philosophers have tried to figure out the best ways to achieve such outcomes. Plato and his disciples had a profound distrust of democracy and the mob, despite the fact that we now think of the ancient Greeks as the inventors of democracy. In Plato’s view, the right way to do it was to have a sagacious philosopher king who could make just and wise decisions – but also to surround him with a small group of trusted men who could advise him.

Many centuries later, after observing the effects of the chaos of the English Civil War that evolved from the reign of a foolish king, Thomas Hobbes argued that keeping order was the key. Hobbes concluded in that frequently-quoted phrase, “In such condition, there is no place for industry; because the fruit thereof is uncertain: and consequently no culture of the earth… no arts; no letters; no society; and which is worst of all, continual fear, and danger of violent death; and the life of man, solitary, poor, nasty, brutish, and short.”

Some years thereafter, John Locke imagined the social contract between rulers and ruled that would put even a philosopher king on a shorter leash. By the beginning of the nineteenth century, Jeremy Bentham could insist that a key feature of any such a contract must be to provide the optimum results for the largest number of a nation’s citizens. And it fell to Karl Marx and those that followed him to explore how the hidden mechanisms of economic behaviour actually dictated the unbalanced terms of that political contract.

Meanwhile, the creators of the American and French revolutions pushed the ideas of Locke and others in setting out the enduring precepts of representative government, while Edmund Burke examined the nuances of the tasks of the representatives essential to such a system. For Burke, to do their jobs properly, representatives would sometimes reflect the ideas of a constituency, but sometimes they would need to be true to their own ideas and sense of right and wrong.

By the end of the nineteenth century, the basic understandings of the possible range of relationships between the rulers and the ruled had been sketched out – and critiqued. And in the succeeding century, virtually every version of these relationships was tried out or inflicted on people across the globe. Borrowing from the ideas of the past two and a half millennia, it has become increasingly accepted that all people need to have a real say in those who would be their “rulers” – and that there are limitations on what those rulers can do to the ruled, without further authorisation. Rulers do not get a totally blank cheque.

But there is yet another philosophical tradition that provides yet another crucial insight into the behaviour of the rulers – and what happens when things go seriously off the rails. Classic Greek theatre has also had something crucial to say on the nature, limits and perversions of leadership – the concept of hubris. Hubris is extreme pride or arrogance symptomatic of a weakening contact with reality – and an overestimation of a ruler’s own competence, accomplishments or capabilities – like Macbeth or Dr Faustus.

Observers of the political scene in both South Africa and America have certainly witnessed hubris in action among their respective politicians in recent years. George W Bush’s tragic misadventures in Iraq could easily be the raw material of a Shakespearean drama (and may yet still), just as would Thabo Mbeki’s abrupt, humiliating reversal of fortune at Polokwane.

But both nations continue to generate new and promising examples of hubris in political life. Let’s start with South Africa. Next week, the government and its obedient client, Sanral, plan to turn on the switches for the e-tolling project for the highways throughout Gauteng Province.

Despite growing public distress with the way the government chose to manage these highway upgrades, officials have continued to insist their decisions were right – and that anything else was simply off the table. Now virtually no resident disagreed with the need for better roads, and very few truly disagreed with the need to find a way to pay for the improvements – even if many wondered why these improvements hadn’t been paid for out of fuel taxes collected earlier. The government, of course, argued that the real rationale for financing these highways should be the sacrosanct “user pays” principle, even as they bought into an expensive, foreign system. This system came complete with a high-tech payment system that will now require millions of Gauteng residents to participate “willingly” in their paying for the use of these highways (and repatriating substantial funds abroad), each and every time they venture forth from their homes.

Despite a growing clamour of public outrage, government officials have rejected outright the idea that previous fuel taxes should have paid for it, or even that a simple add-on to new fuel taxes could do the job, going forward. Ultimately, the authorities simply brushed aside the sense the rulers needed to be bothered with obtaining the consent of the governed for a major change in the rules, awkwardly trying to build support for this plan by exempting buses and taxis, thereby limiting opposition to private car owners.

In the process, they boxed themselves in. They have created a system that will generate invoices every month to millions of recalcitrant highway users, clogging the postal system with bills, appeals, summonses and then further appeals in the courts. In this way they have almost guaranteed a repeating cycle of citizen resentment, right up to next year’s election.

Meanwhile, across the Atlantic, the Obama administration’s long anticipated rollout of the Affordable Care Act has – at least in its beginning stages – similarly come unstuck. The author needs to make it clear that he was, and remains, supportive of the idea of extending the benefits of medical insurance to the fifty million or so Americans currently without insurance. Such a system could ensure people with “pre-existing conditions” could obtain health insurance despite having survived cancer or some other disease. And, in the process, the overall health sector would become more efficient in its delivery of services, as well as being more cost-efficient in the process.

However, the law as it was finally passed was a complex compromise. It ensured a central role for the nation’s private health insurance companies as well as a vast panoply of arrangements and subsidies to get healthy (generally uninsured) young people and poor people into the system, rather than establishing a universal, single payer system like the core of Medicare (America’s own health insurance for the elderly), or something vaguely similar to the British NHS. The bill became law in the face of full-throated Republican Party opposition in Congress and there continues to be very little willingness by most Republican governors to carry out the state-level mandates built into the system as well.

Ultimately, the successful launch of ACA, or Obamacare, would be dependent on a massive Internet-based comparison shopping and application process. As things happened, the Obama administration, despite the fact that they were reconstructing a major sector of the national economy via one of the most complex computer networks and systems so far imagined, ended up contracting with one of the usual federal contracting suspects to construct this system, virtually from scratch. They did it this way, rather that draw on the full participation of really big, innovative companies like Amazon.com – or even the big health insurance companies – to construct what would be a truly revolutionary national effort.

There is the possibly apocryphal story that as Col John Glenn sat atop his Mercury-Atlas rocket, and as the countdown moved down through the minutes and seconds, he said over the radio, “You know, a thought just occurred to me, this whole thing was built by the lowest bidder”, in accord with usual government procurement policies. Of course it almost certainly wasn’t – precisely because NASA’s early space program was precisely the kind of effort that demanded as near as possible to zero defect work, rather than the more usual “good enough for government work” approach.

Almost certainly enlisting the best possible people and advice from the world’s most advanced IT corporations – in the US – would have made it easier to achieve a successful launch for Obamacare. However, the writer understands there was great reluctance to bring in such outsiders – and thereby sharing the credit for the launch of an inevitable success – until it was far too late. The Obama administration gambled on this rollout as the signal achievement of their time in office. But, unless they can fix this sufficiently that those millions of previously un- or underinsured citizens are brought in, it runs the risk of being remembered in a way that will do little credit to their achievement.

Building and paying for good highways are a necessity for a modern society, just like supporting the highest quality and cost-efficiency of a nation’s health care sector. But a government that rides roughshod over the voices of its citizens as it spends those citizens’ money deserves the growing criticism it is accumulating – and the political fallout that may flow from this. And a government that manages to ignore the need to spend its citizens’ time and energy as carefully as possible in carrying out a major, new health program – unless it can successfully reboot this mess – similarly runs the risk of alienating the very people it had planned to assist in the first instance.

In all of this there is a core lesson to be learned. Citizens of the 21st century will no longer accept the untrammelled decisions of the philosopher king – the need to hear society’s other voices is a critical part of a functioning, modern democratic state. Otherwise there will be costs – and they come in the form of the progressive delegitimisation of the state in the minds of citizens – and then the unpleasant choices that come at the hands of voters. Or as Juvenal warned, way back in Roman times, “Quis custodiet ipsos custodes?” DM