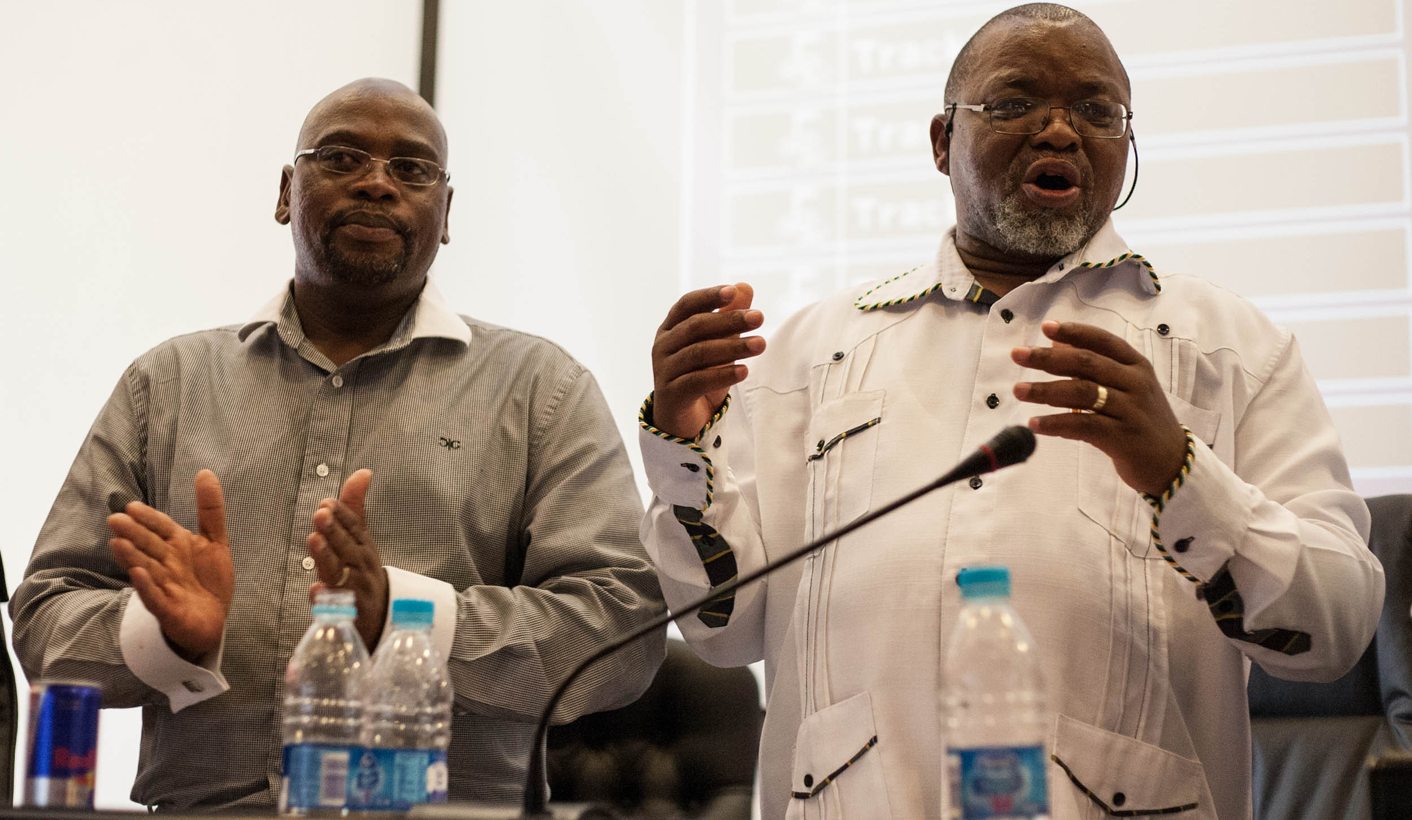 The South African Transport and Allied Workers Union (Satawu) central executive committee meeting provided the latest instalment in rifts running through Cosatu and the tripartite alliance on Wednesday. Cosatu President Sdumo Dlamini warned his opposition the National Union of Metalworkers SA (Numsa) of the pains it could face in splitting from Cosatu. ANC Secretary General Gwede Mantashe said at all costs the federation must stay together. Given the battle-like tone of the event, that seems unlikely. By GREG NICOLSON.

Satawu supports the Cosatu president and he spoke in a comfortable environment, unlike when he was recently booed at a march in Johannesburg. His speech painted the crisis the federation is in. “We are under attack as an organisation from forces outside and within whose aims are to liquidise Cosatu,” said Dlamini. He said neither blackmail nor intimidation would deter him from trying to keep Cosatu together and he will risk his life to protect the federation. Cosatu and all of its unions are under attack, as can be seen by the recent divisions across unions, said Dlamini. “Defend! Defend! Defend! Defend!” he repeated. “Very, very important people in South Africa” are trying to dislodge the trade union federation by starting with individual unions, said Dlamini, who was animated in his speech and interspersed humour with battle talk. “We are sur-vi-ving,” he said slowly. “We can see the light now and we are winning this one whether they like it or not.”

Dlamini sent a warning to Numsa Secretary General Irvin Jim and others considering splitting from Cosatu and moving away from the ANC and the tripartite alliance. Without mentioning Jim, he suggested the Numsa leader had broken the values of democratic centralism (a principle also mentioned by Mantashe) by failing to adhere to Cosatu’s central executive committee decisions. He said the decisions of Cosatu in the Eastern Cape demanding the reinstatement of Vavi have been nullified and he will visit the province along with KwaZulu-Natal where Numsa recently gave Vavi a platform to speak.

He urged Satawu members to promote Cosatu’s unity and warned that any union wanting to leave would be hurt. “If you want to split Cosatu remember you yourself will be divided [….] People are not water. So be warned and be careful [….] There are those workers that will not leave and your union will be split.” With Numsa looking divided after its President Cedric Gina resigned this week, Cosatu will be ready to capitalise on a split by retaining members who don’t want to leave.

Dlamini suggested Numsa might be trying to use its position as the largest union in the federation to strong-arm the federation and challenged them to act on their threats. “If you have the desire to leave, why are you wasting time?”

In his lecture, Mantashe was more conciliatory. Unlike Dlamini, he mentioned suspended Cosatu Secretary General Zwelinzima Vavi, whose position is at the heart of the current disputes.

Mantashe said the debate on forming a workers’ party, which Numsa has said is needed in South Africa, is an old issue and was previously and is now championed by the union. Mantashe said the ANC’s task team on Cosatu’s problems has been busy speaking to every union. “Splitting the federation is not an option,” he advised. “You can pursue Vavi but if it is too expensive, try something else. Do anything and everything else.” The ANC has publicly made similar comments before but it seems little more than lip service. He said Numsa leaving Cosatu would be a negative, but critics shouldn’t judge the federation on one union.

“Don’t look for scapegoats,” he said in response to Numsa’s claim that leaders of the ANC and SACP are behind the rifts and the recent resignation of Gina. Mantashe said Gina’s resignation can be understood through the concept of democratic centralism. If someone doesn’t agree with the decisions of the collective, they must step aside. If we apply the concept to Numsa, however, it would suggest they must also step aside from Cosatu. The concept of democratic centralism means as long as they disagree with the majority of unions in Cosatu, they will continue to dissent and cannot remain within the federation.

Satawu President June Dube, who was promoted when Ephraim Mphahlele quit the union to join the rival National Transport Movement, declared Satawu’s support for the ANC and called for the “Zuma moment”, an apparent play on Vavi’s “Lula moment”. Dube indirectly slated Vavi and Numsa. He said current opposition to the ANC “is disguised as chapter nine institutions and judiciary” and while the opposition within the Gauteng ANC has been defeated they are still active. “Their agenda is empty but they use the rhetoric revolutionary language to advance their narrow agenda that is threatening to undermine the national democratic revolution and all the gains.”

The feud between Numsa and the alliance is bitter. On Tuesday, the union pointed journalists to comments made by Steve Phiri Matsemela, the long-standing Popcru Gauteng secretary. He wrote on Facebook on Tuesday: “All of u can write what u like and say all manner of things, it will never deter us from our strategic alliance with the ANC, I’m saying it now that Irvin Jim is the most vitriolic political amoeba and must be expelled within our ranks. Thugs and criminals must be out rooted from society even if it means it’s yourselves who are chatting here we must deal with u to the extend of killing you if u pose threat to life, no apology..!!!” The comments are still online and Numsa says it is scared for Irvin Jim’s life. On Wednesday, Popcru distanced itself from the comments, saying despite the official’s affiliation with the union, he does not represent its views. DM