DA: We’re not over race, but united we stand 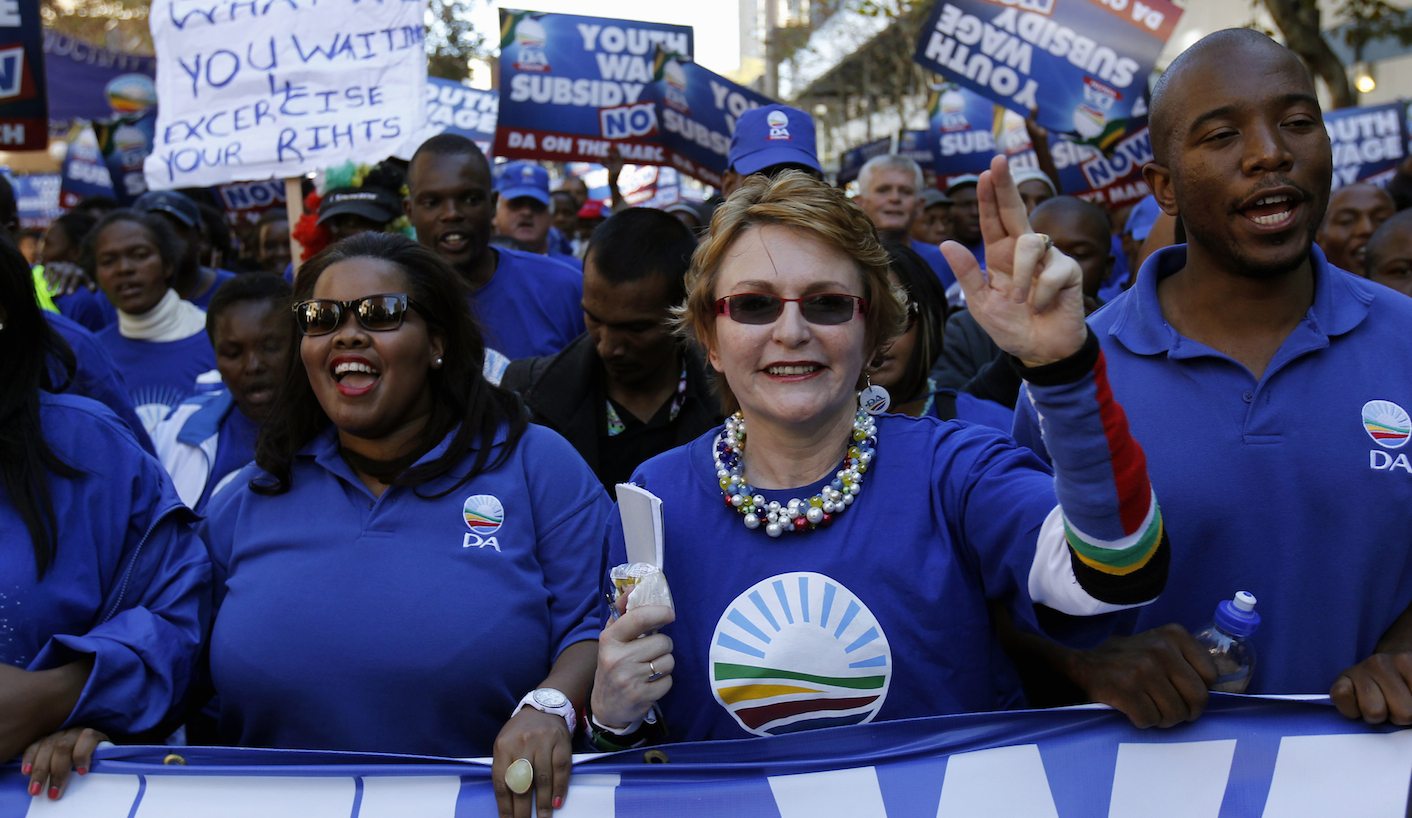 The DA’s position on race-based affirmative action has been painted as inconsistent and confused this month, after the party changed its mind on supporting the Employment Equity Amendment Bill. They’ve also been presented as a party riven by internal conflict. On Sunday, after a weekend of policy conferencing, DA leaders were presenting a united front as they told journalists that their position on the matter is now clarified - and consistent with everything they’ve previously said. Internal tensions? What internal tensions? By REBECCA DAVIS.

The DA discussed no fewer than 20 issues over the course of their three-day federal council meeting and policy conference in Cape Town. But their post-council press conference focused on just one: the party’s policy stance on redressing Apartheid’s legacy. Party leaders evidently felt it a priority to send out a clear message on that score, given the confusion on the matter that has appeared to reign up till now. In a slightly strange newsletter in early November, DA leader Helen Zille explained that the party’s erroneous support for the Employment Equity Amendment Bill, which deals with demographic diversity in the workplace, happened the same way that Malcolm Gladwell explains plane crashes happening in his book Outliers. (Incidentally, there’s a great critique of Gladwell’s plane theory here.)

In other words, Zille said that the problem came down to communication and teamwork: an explanation which didn’t do much to allay rumours of internal conflict in the DA. But on Sunday, there was nothing but unity on display for journalists. The DA brought no less than seven of their leaders to the press conference – Thomas Walters, Mmusi Maimane, Wilmot James, Helen Zille, Lindiwe Mazibuko, Patricia de Lille, Makashule Gana and Anchen Dreyer. This seemed slightly unnecessary, since Zille and Mazibuko did the lion’s share of talking, but the intended effect was surely also aesthetic: diversity in action!

The DA loves diversity. This was one of the messages that Zille wanted to communicate on Sunday: that diversity adds quality to organisations as well as being a moral imperative. The DA is also not “post-race”, or however you want to gloss it. The DA sees race. The DA believes that race matters. The DA eventually wants to use another proxy for disadvantage, but doesn’t believe that the country is there yet. The DA believes in the implementation of race-based measures which provide redress for the lingering effects of Apartheid.

The DA does not, however, believe in racial quotas. Zille cited the case of Jennila Naidoo, who took SAPS to court for unfair discrimination and won, as exemplary of the injustice which can result from quotas. In terms of the Gauteng Equity Allocations for SAPS, Naidoo could not be given a promotion, despite having performed best in test scores. This was because after the demographic calculations for race and gender quotas were carried out, only 0,037 of positions on a certain level could be given to Indian females – and SAPS testified that this had to be rounded down to 0.

Due to this kind of absurdity, the DA opposes racial quotas. But they support racial targets. Zille gave the example of recruitment into the DA Young Leaders programme to illustrate what they mean by this. The DA Young Leaders programme has no set racial quotas, but they put “enormous effort” into looking for young black South Africans to join its ranks.

In a still race-divided country, is this good enough? The DA thinks so. The DA is also opposed to introducing punitive measures for companies which fail to comply with BBEEE regulations, which is the major reason why the party did a U-turn on the Employment Equity Amendment Bill. In a nutshell, the DA thinks that harsher penalties will serve as a disincentive to investment and job creation. Instead, they would incentivise companies to comply with employment equity.

“Incentives are a far better intervention,” Mazibuko said; for instance, businesses not being able to work with government unless they are sufficiently transformed. Journalists asked whether the party leaders really thought that employment equity would happen if nobody were policing it. The answer to this seemed to be, pretty much: the current system isn’t working well enough – “certainly the black middle class is bigger but it could be much, much bigger,” to quote Zille – so introducing a harsher version of the current system won’t work either.

The thing about that argument is that you can make the opposite case too. The current system isn’t working, which means that even under threat of penalties, adequate transformation isn’t occurring. Can South African business really be left to their own devices in this regard? When DA staffers were asked afterwards if there was research (the DA loves research) to support the idea that incentives would work better than penalties in this regard, we didn’t receive a clear answer.

“We want to change the entire architecture of the system,” Zille said earlier. The party produced a table to contrast its approach to race-based redress with that of the ANC. It is, to say the least, a little airy in its portrayal of ANC ideology: the ANC supports the notion that “race determines destiny”, it claims, for instance; the ANC is “not concerned with growth and jobs”, and the ANC “encourages corruption” and “discourages entrepreneurship”. (The DA obviously does the shining opposite in most cases.)

The fundamental question wrestled with by the DA going into the conference was “whether or not the DA accepts race as a legitimate proxy for disadvantage,” Mazibuko said. This is precisely the question being grappled with by UCT at the moment: whether we have come far enough since Apartheid to use factors like family income, or quality of education, to judge disadvantage more accurately than race.

The DA’s answer to this is: Not yet. A non-racial society is a goal, but it doesn’t exist today. “Race is still a fundamental indicator of where you will go in life,” Mazibuko said. Zille said that she foresaw race becoming “less and less reliable as a proxy for disadvantage”, but at the moment it was the best available indicator. Race-based redress won’t last forever, though the party declined to specify when exactly it should be phased out.

Leaders were at pains to present this stance as part of a cogent, coherent ideology within the party’s history. A policy FAQ now available on the DA website goes so far as to quote the South African Liberal Party Policy Handbook, from the 1960s, on the topic of creating a non-racial economy. Zille also mentioned more than once the similarities between their stance and that advanced in 2005 by erstwhile party leader Tony Leon. Perhaps this was intended as a riposte to Leon’s stern critique of the party’s flip-flopping on the Employment Equity Amendment Act issue; or perhaps it was intended as a sop to the party’s traditional electoral base, to assuage anxieties over the DA’s support for the principles of affirmative action.

On the specific subject of the Employment Equity Amendment fracas, Mazibuko said that the matter has been “dealt with”, and “there will be no recriminations”. Two DA parliamentarians have already been shuffled around – Sej Motau and Andricus van der Westhuizen – but Motau denied at the time that the move was down to disagreements over the Employment Equity Amendment Act, saying that he was “more than happy” with his new portfolio.

Zille also denied that there were any major internal disagreements over the issue of BBEEE at all. In advance of this weekend’s meeting, it had been reported that a “black caucus” would be leading the charge against the older guard towards supporting BBEEE. The DA’s line is that no such conflict ensued, though the debate was, and remains, “difficult and complex”, in Wilmot James’s words. Whether the DA’s proposed solutions to the issue of race and economic transformation satisfy their traditional supporters while at the same time garnering them new young black votes – well, that’s a question for the ballot box. DM