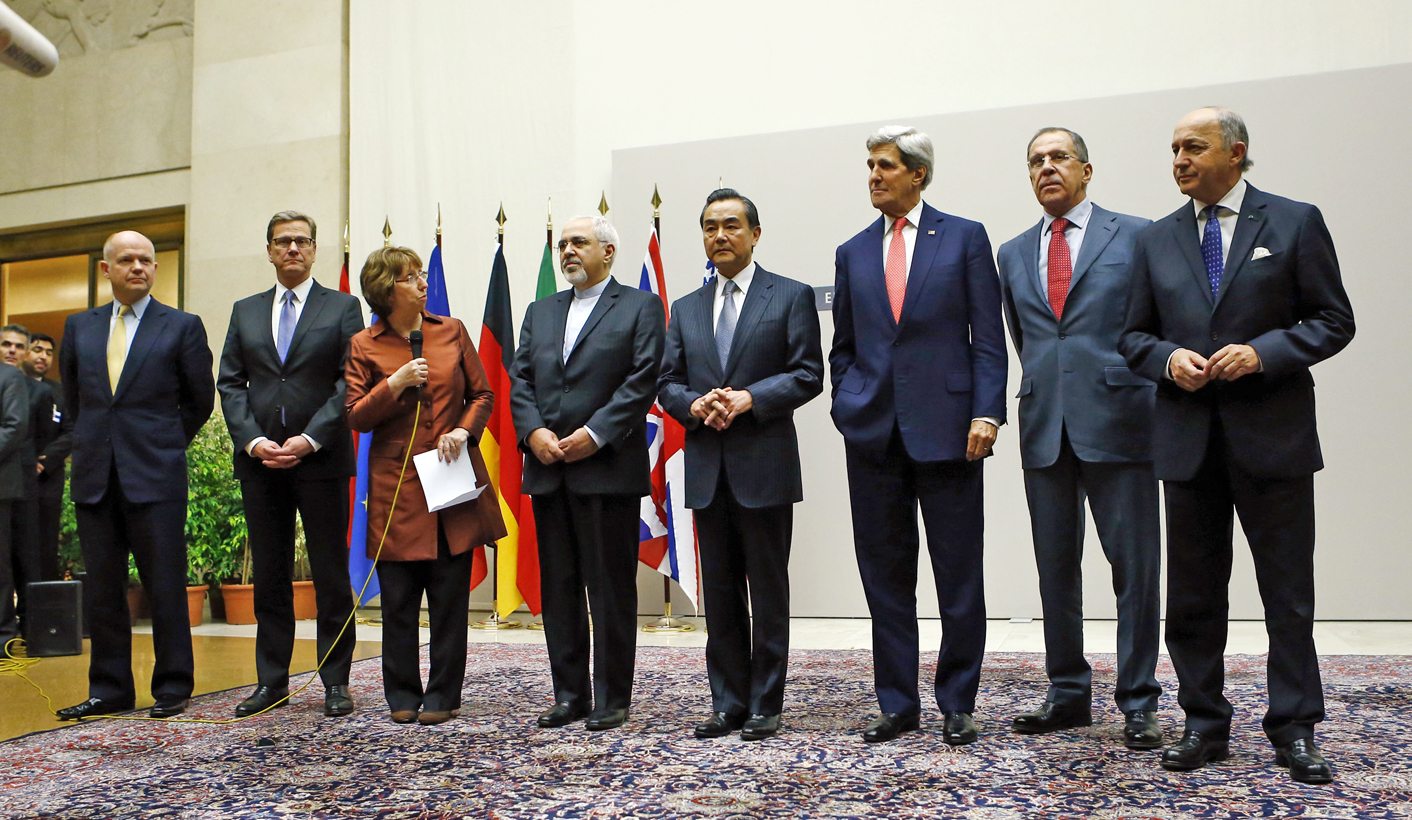 Iran and six world powers reached a breakthrough deal early on Sunday to curb Tehran's nuclear programme in exchange for limited sanctions relief, in what could be the first sign of an emerging rapprochement between the Islamic state and the West. By Parisa Hafezi and Justyna Pawlak.

Aimed at ending a dangerous standoff, the agreement between Iran and the United States, France, Germany, Britain, China and Russia was nailed down after more than four days of tortuous negotiations in the Swiss city of Geneva.

Halting Iran’s most sensitive nuclear work, it was designed as a package of confidence-building steps to ease decades of tensions and confrontation and banish the spectre of a Middle East war over Tehran’s nuclear aspirations.

European Union foreign policy chief Catherine Ashton, who has been coordinating talks with Iran on behalf of the major powers, said it created time and space for talks aimed at reaching a comprehensive solution to the dispute.

“This is only a first step,” Iranian Foreign Minister Mohammad Javad Zarif told a news conference. “We need to start moving in the direction of restoring confidence, a direction in which we have managed to move against in the past.”

In Washington, U.S. President Barack Obama said that if Iran did not meet its commitments during a six-month period, the United States would turn off sanctions relief and “ratchet up the pressure.”

But Israeli Prime Minister Benjamin Netanhayu’s government denounced the agreement as “a bad deal” that Israel did not regard itself as bound by.

Before Sunday’s agreement, Israel, believed to be the Middle East’s only nuclear power, said the deal being offered would give Iran more time to master nuclear technology and amass potential bomb fuel.

The West fears that Iran has been seeking to develop a nuclear weapons capability. The Islamic Republic denies that, saying its nuclear programme is a peaceful energy project.

The United States said the agreement halted progress on Iran’s nuclear programme, including construction of the Arak research reactor, which is of special concern for the West as it can yield potential bomb material.

It would neutralise Iran’s stockpile of uranium refined to a fissile concentration of 20 percent, which is a close step away from the level needed for weapons, and calls for intrusive U.N. nuclear inspections, a senior U.S. official said.

Iran has also committed to stop uranium enrichment above a fissile purity of 5 percent, a U.S. fact sheet said.

Refined uranium can be used to fuel nuclear power plants – Iran’s stated goal – but also provide the fissile core of an atomic bomb if refined much further.

Diplomacy with Iran was stepped up after the landslide election of Hassan Rouhani, a relative moderate, as Iranian president in June, replacing bellicose nationalist Mahmoud Ahmadinejad.

On a Twitter account widely recognised as representing Rouhani, a message said after the agreement was announced, “Iranian people’s vote for moderation & constructive engagement + tireless efforts by negotiating teams are to open new horizons.”

The Geneva deal has no recognition of an Iranian right to enrich uranium and sanctions would still be enforced, the U.S. official said.

U.S. Secretary of State John Kerry said the agreement would make it harder for Iran to make a dash to build a nuclear weapon and would make Israel and other U.S. allies safer.

Kerry also told a news conference that while Obama would not take off the table the possible use of force against Iran, he believed it was necessary first to exhaust diplomacy.

He said the limited sanctions relief could be reversible.

After Ashton read out a statement on the deal to the cameras at the United Nations in Geneva, ministers appeared elated. Ashton and Kerry hugged each other, and Kerry and Russian Foreign Minister Sergei Lavrov shook hands. Minutes later, as the Iranian delegation posed for photos, Zarif and French Foreign Minister Laurent Fabius approached each other and embraced.

A White House fact sheet detailed what Iran could obtain:

– Potential access to $1.5 billion in revenue from trade in gold and precious metals and the suspension of some sanctions on Iran’s auto sector, and its petrochemical exports;

– Allow purchases of Iranian oil to remain at their currently significantly reduced levels. “$4.2 billion from these sales will be allowed to be transferred in instalments if, and as, Iran fulfils its commitments,” the fact sheet said;

Most of the sanctions, Kerry said, would remain in place.

“The approximately $7 billion in relief is a fraction of the costs that Iran will continue to incur during this first phase under the sanctions that will remain in place,” the White House said. “The vast majority of Iran’s approximately $100 billion in foreign exchange holdings are inaccessible or restricted.”

Kerry and the foreign ministers of the five other world powers joined the negotiations with Iran early on Saturday as the two sides appeared to be edging closer to a long-sought preliminary agreement.

The Western powers’ goal was to cap Iran’s nuclear energy programme, which has a history of evading U.N. inspections and investigations, to remove any risk of Tehran covertly refining uranium to a level suitable for bombs.

British Foreign Secretary William Hague said in a Twitter message that it was an “important and encouraging” first-stage agreement with Iran, whose nuclear programme “won’t move forward for 6 months and parts rolled back.”

France’s Fabius said, “After years of blockages, the agreement in Geneva on Iran’s nuclear programme is an important step to preserving security and peace.”

Tehran, whose oil-dependent economy has been severely damaged by tightening Western sanctions over the past few years, denies it would ever “weaponise” enrichment.

The OPEC producer rejects suspicions it is trying covertly to develop the means to produce nuclear weapons, saying it is stockpiling nuclear material for future atomic power plants.

“This is the first time in 33 years that Washington and Tehran have concluded a formal agreement. Even six months ago, few would have imagined this outcome,” said senior fellow Suzanne Maloney of the Saban Center for Middle East Policy at Brookings. DM