Remembering the true legacy of JFK 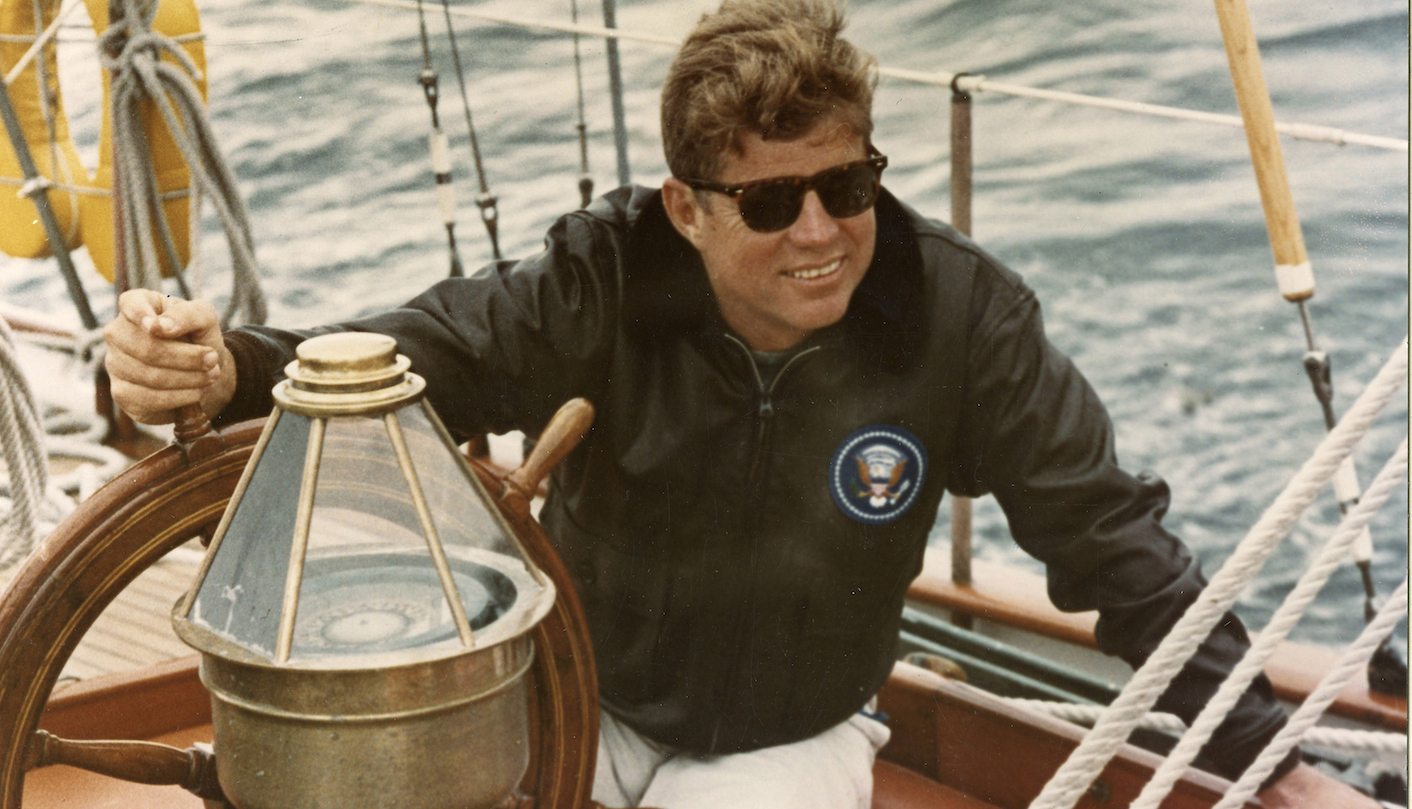 Much of the focus of the 50th anniversary of JFK’s assassination seems to be on the intrigues and sleaze of his sex life. Far from this, however, the true legacy of JFK is profound. By KALIM RAJAB.

As a teenager in the 1990s, I developed a fascination with Winston Churchill, and in particular with a biography of him called The Last Lion. It was a magisterial assessment, written by the American historian William Manchester. As luck will have it, an academic aunt of mine worked with Manchester at Wesleyan University in Connecticut, and so after several cross-Atlantic letters (emails were unknown then), I finally got to meet him when I travelled to America for the first time.

His biography is still considered one of the best works on the British statesman; but Manchester is legendary for another reason, as I came to realise after meeting him. Between 1958 and 1963 he was part of John F Kennedy’s inner circle, shadowing him and occasionally being one of his speechwriters.

What was Manchester, a dreamy academic, doing shadowing and advising the President of the United States, especially at a time when nuclear holocaust seemed imminent? This apparent incongruence was classic Kennedy – and one of the reasons why the world continues to be fascinated with a circumscribed presidency which didn’t even last three years. For JFK taught the world to value intellectualism and measured reasoning. He loved the cut and thrust of high quality debate, the more so if it could help distil the complex geopolitical issues of his time.

The unusual characteristic those near him noted was a capacity to listen, to take in all strands of often-contradictory advice; and then act decisively.  It was for this reason that Kennedy took a shine to Manchester, the bookish Harvard professor Arthur Schlesinger, and the untested Ted Sorenson. All were under 40 and infused with idealism, rather than the cynicism that prevailed in other administrations before JFK’s.

I remember the glint in Manchester’s eyes as he related to me his years with Kennedy, all those years before. He spoke of the hope, the idealism, the freshness which ushered in a brave new world for an America made grey by the looming spectre of war with Communist Russia.

He spoke of the space age, of the limits of human endeavour which JFK urged his countrymen to push themselves towards – and above all, of the soaring rhetoric. He quoted in full JFK’s (pretty much off the cuff) speech where he proclaimed that civil rights would be an imperative of his Administration: “We are confronted primarily with a moral issue. It is as old as scripture and is as clear as the Constitution. The heart of the question is whether all Americans are to be afforded equal rights and equal opportunities… A hundred years of delay have passed since President Lincoln freed the slaves, yet their heirs, their grandsons, are not fully free. They are not freed from the bonds of injustice, they are not freed from social and economic oppression. And our Nation, for all its hopes and all its boasts, will not be fully free until this is realised.” I was transfixed. Churchill could wait; thanks to Manchester, I had found a new hero.

The speeches JFK gave are some of the most evocative of our time. As the historian Simon Sebag Montefiore has noted, “It represents a strand of idealism, even though much more is now known about Kennedy’s personal flaws.” But leave aside the idealism; 50 years after his death, given what we know of his foibles, what is the legacy he left behind?

The most important legacy for me is in the face of perceived threats, to do all one can to preserve the peace – because war inevitably leads to disastrous results. Nowhere did he exhibit this more than during the Cuban Missile Crisis.

For all his fabled rhetoric, the principle theme of his presidency was preventing nuclear war. It is difficult to understand quite what a fraught world Kennedy inherited from his predecessor, Ike Eisenhower. These were years when humankind came closest to nuclear destruction. Nothing we’ve faced before or since – not two World Wars, not bubonic plague, not even the war on terrorism – has come even close.

If one of either America or Soviet Russia had attacked the other, all of their respective allies and proxies – from Western Europe and NATO, through to Latin America and Asia – would have been drawn in. Much of Africa – still under colonial rule and therefore proxies – would also not have been spared. Leaving aside China (which by then had broken with the Soviet Union and was essentially isolationist) the future of man was literally on a knife-edge.

Transcripts released reveal to modern viewers exactly how much power and influence the hawkish Generals had – on both sides. Do you really want to be the last one to pull the nuclear trigger, they bellowed to their respective leaders; you know the other guy wants to annihilate us, so why wait?

Things would come to a head when American U-2 spy planes revealed the buildup of secret surface-to-air missiles being primed in Cuba, ninety miles off the coast of Florida. The spy planes had caught them early – but in two weeks they would be ready to launch. It seemed like it was one minute to midnight.

The young Kennedy (who had been mauled in the recent Bay of Pigs military debacle) together with his ‘wishy-washy’ aides were held in barely disguised contempt by the Generals, who saw them as too soft to go to war. Blusteringly, they began preparations for a pre-emptive missile strike on Cuba followed by invasion.

Far from being soft, Kennedy understood that war is often little more than a bravado thing – and is almost always the wrong thing to do. The path to war, he felt was paved with avoidable error and miscalculation. So, despite the contempt, he urged moderation, reflection. He called in his team of intellectuals, highly intelligent men who, like his brother Robert, knew the value of sober rationalism. For thirteen days, according to RFK’s memoirs, they “met, talked, argued, disagreed and debated some more” with the Generals about how best to lead to a peaceful outcome.

Everyone in those secret meetings knew that at any minute, word could arrive that missiles were on their way to Washington and that they were doomed. In light of this, I find striking what exactly they spent the most time debating about for the first five days.

Other administrations would only have concerned themselves over weighing up which military strike option was the best – in other words, starting from the presumption that war was inevitable. The Kennedy Administration, by contrast, agonised that America couldn’t hope to maintain its moral leadership in the world were it to strike first. Rather than presume war, they started from the premise that America must first do all in its power to preserve the peace.

As RFK mentions, “whatever the military and political arguments were for an attack… America’s traditions and history would not permit such a course of action. [No matter how the Generals couched it] they were nevertheless advocating a surprise attack by a very large nation against a very small one. This could not be undertaken if we were to maintain our moral position at home and around the globe. Our struggle against Communism…was far more than physical survival – it had as its essence our heritage and our ideals and these we must not destroy.”

JFK and his advisors used their time to build up a legal basis for pressuring Russia to remove its missiles. They built up multi-lateral buy-in from the United Nations and the Organisation of American States (OAS) to exert further diplomatic pressure. And they were able to persuasively demonstrate to the Russians, through their careful handling of events, that they were not trigger-happy warmongers intent on reaching for the panic button. In the end, the Russians saw the light and removed the missiles, helped by the American commitment to removing the missiles based in Turkey. A de-escalation of tensions was achieved. It was an incredibly dramatic moment saved by calm reflection rather than by unhelpful bluster.

Kennedy’s legacy of seeking first to preserve the peace is still a framework of great importance today. The elements of this framework hold that force is only justified in exceptional circumstances. Firstly, if all peaceful means have been exhausted. Secondly, if it stands a reasonable chance of protecting nations from further threats. Thirdly, that there are no unforeseen consequences and that the force does more good than harm (think Iraq here). If other presidents were to use this framework, we probably wouldn’t have had the Vietnam War. We certainly wouldn’t have had the Iraq debacle, and America may not have ventured into Afghanistan.  The recently negotiated settlement in Syria by the Obama Administration owes a lot to JFK’s example of 50 years ago.

So, as we look back on JFK’s life and death, I will not be focusing on the sex stories and the sleaze. I will be remembering his focus on maintaining a proud moral leadership among nations– and I hope the world’s leaders will be, too. This is his legacy. DM