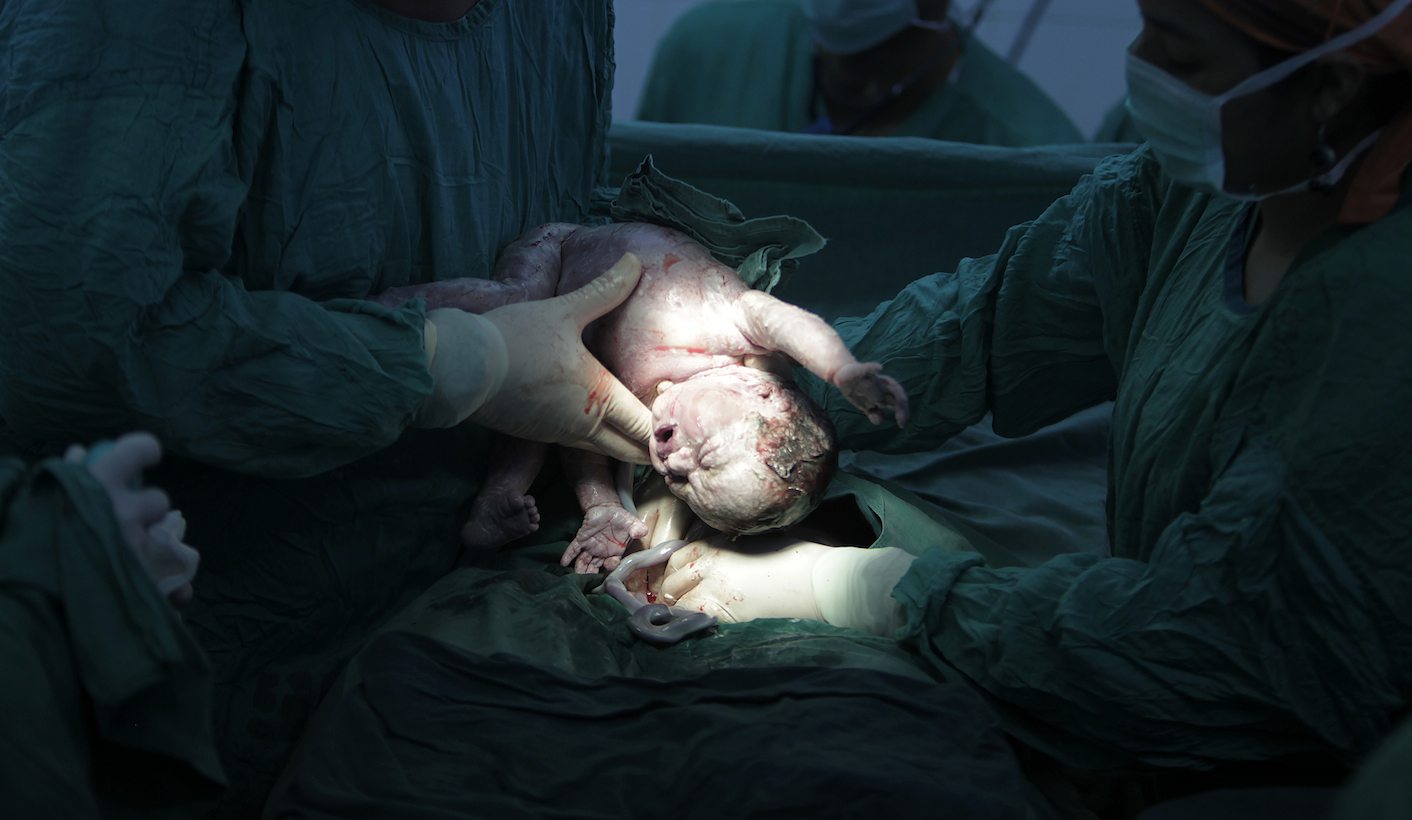 A recent discussion on South Africa's Talk Radio 702 put the practice of eating human placenta on the table (ahem). Whilst there are reports of some people doing it out of curiosity, a host of new mothers say they choose to eat their placenta for health reasons, claiming it speeds their recovery, increases milk production and prevents postnatal depression. Researched for AFRICA CHECK by MELISSA MEYER

Placenta pizza anyone? This was the initial gist of a discussion hosted by Jenny Crwys-Williams on South Africa’s Talk Radio 702 last week. Crwys-Williams read an account by new father and writer for Lifehacker Australia, Chris Jager, who cooked his wife’s placenta and then topped his pizza with it. He did this “for the express purpose” of writing an article about his experience. The accompanying photographs give a sense of what was involved in preparing this dish and are not for the squeamish.

But the radio discussion soon turned to new mothers consuming their own placentas for the perceived health benefits. One caller described how she had hers freeze-dried, ground into a powder and turned into capsules which she then took to recover from labour, a process known as placenta encapsulation. When asked about the benefits, she said she thought it “definitely” made a difference.

There are not many accounts of people eating someone else’s placenta, but this recipe for placenta with broccoli is described as “a tasty dish the whole family will love” and in this blog post a community in a nomadic village shared a placenta bourguignon.

In fact, the practice of maternal placentophagy – as it is scientifically known – seems to be gaining traction, no doubt helped along by celebrity endorsement. There are over 200 registered placenta encapsulator specialists in the United States, Canada and the United Kingdom and a website called Placenta Benefits alone reportedly gets over 250,000 hits a month.

Could these women be on to something? What does the science say about these claims? And, ick-factor aside, are there any reasons women should approach this with caution? We weighed the evidence.

Humans are one of the very few mammals who do not eat their placenta. This is an argument commonly put forward in articles advocating for placentophagy. And it is true. With the exception of marine mammals and some domestically reared ones, all other mammals consume their afterbirth.

But just because animals do it does not mean we should necessarily follow suit. Some researchers have speculated the reason humans do not eat placenta is because we have adapted and developed different ways of dealing with the challenges of birthing.

There is no shortage of anecdotal accounts of the effectiveness of placentophagy. Women have credited it with general improved recovery and more energy, a decrease in postnatal depression, better milk production and more “balanced” hormones.

The placenta can be consumed in a number of different ways, like putting it in a berry smoothie. It can be freeze-dried or steamed and ground into a powder before being transferred into capsules. Some people also cook the placenta. This book features 25 recipes to inspire placenta-based dishes.

The benefits associated with eating placenta are thought to be the result of the nutrients, stem cells and hormones contained in the placenta. Placenta is also used in traditional Chinese medicine to treat an impressive list of conditions.

Experts are sceptical. In general, research on the potential benefits of placentophagy is sparse, largely because it is inherently difficult to study. The reported effects are loosely defined, with some reporting “improved mood” or “ reduced fatigue”, and the findings are difficult to compare. An American scholar of placentophagy, Mark Kristal, likens it to “finding a needle in a haystack”.

There are no double-blind placebo controlled studies to back up any of the claims made about the benefits of eating placenta. As a result, health practitioners have called for further and more rigorous studies before any conclusive recommendations can be made.

But experts are sceptical. A spokesperson for the Royal College of Obstetricians and Gynaecologists has argued that whilst animals might eat placenta for nutrition, humans who are well nourished have no reason to do it.

Kristal, the US placentophagy scholar, has warned that the cooking process is likely to destroy the protein and hormones and that drying or freezing would similarly decrease the nutritional value of the placenta.

Even the Independent Placenta Encapsulation Network which, as it name suggests, advocates strongly for placentophagy, is careful to mention that “there is currently no scientific evidence to suggest the placenta pills are or are not beneficial” and add that all their data is experiential.

Of course believing they work may be enough to provide positive outcomes. A recent study collected the anecdotal evidence from 189 mothers who had eaten their placenta. The vast majority reported an overall positive experience – an outcome the researchers acknowledge could be due the placebo effect.

This could be true, however, of anything, and to establish whether it is or is not a placebo effect demands further investigation.

Because so little about placentophagy has been properly studied, the side effects too remain mostly anecdotal. Whilst reportedly rare, these could include headaches, mood swings, stomach cramping, pelvic girdle pain and digestive issues.

A blogger for the New York Times, Nancy Redd, has first-hand experience of how placentophagy might go wrong. She believes her placenta capsules were responsible for a near emotional meltdown after an uncomplicated and largely stress-free labour. She says she regrets taking them “without a single shred of proof” that would have real benefits.

In a medical environment placentas are commonly treated as a biohazard. This is because human tissue can carry disease.

Perhaps unsurprisingly then, humans have a far richer record of disposing placenta than eating it. In a cross-cultural survey of 179 human societies, researchers found only one example of maternal placentophagy, leading them to conclude that it is a “universally avoided” practice.

It is worth noting that placentophagy actually appears to be a relatively recent movement, first mentioned in academic work in the 1970s, and emerging as part of a desire among some groups to return to more natural forms of birth.

Researchers did find that of the 179 cultures studied, 109 had specific rituals for discarding the placenta, most common of which was burial.

Again this indicates that humans have a long history of consciously not eating the placenta and instead taking care to dispose of it properly, for the purpose of hygiene, culture or both.

Hospitals will not release the placenta if the mother has a sexually transmitted disease, including HIV. Placenta encapsulation services also dissuade mothers from attempting to use their placenta in such cases.

Placenta encapsulation services and other advocates for placentophagy all stress that once obtained from the hospital, extreme care needs to be taken to ensure the placenta does not spoil. It should be transported in a sterile cooler bag, transferred to a fridge and used as soon as possible, but kept no longer than 5 days. It can also be frozen.

Currently there is not enough evidence to support the claims made for placentophagy in humans. There may in fact be good reason why humans have deviated from what is otherwise common practice among other mammals. More research is needed before anything can be said conclusively about the health benefits and risks of eating a placenta.

New mothers may however, still choose to do it based on their own perception of the benefits – since, thanks to the placebo effect, this may have positive outcomes for them even if there is no clear medical reason for this. If done hygienically, this is not known to pose any risk to the health of the mother, provided she stops taking placenta if any side-effects are observed.

Of course not all mothers are likely to be equally persuaded by the practice of placentophagy. When Lifehacker’s Chris Jager attempted to convince his wife to have some of the pizza he prepared with her placenta by arguing that it “came out of” her, she responded, “so does faeces”.

You could always make art with it. Some new mothers are taking the placenta home to make prints of it. Again, all rules regarding hygiene and safety apply.

Soon new mothers might also be able to donate their placentas for stem cell harvesting, a practice already offered by a few providers. Stem cells are used to treat a wide range of illnesses, including leukaemia as well as injuries like burn wounds. DM