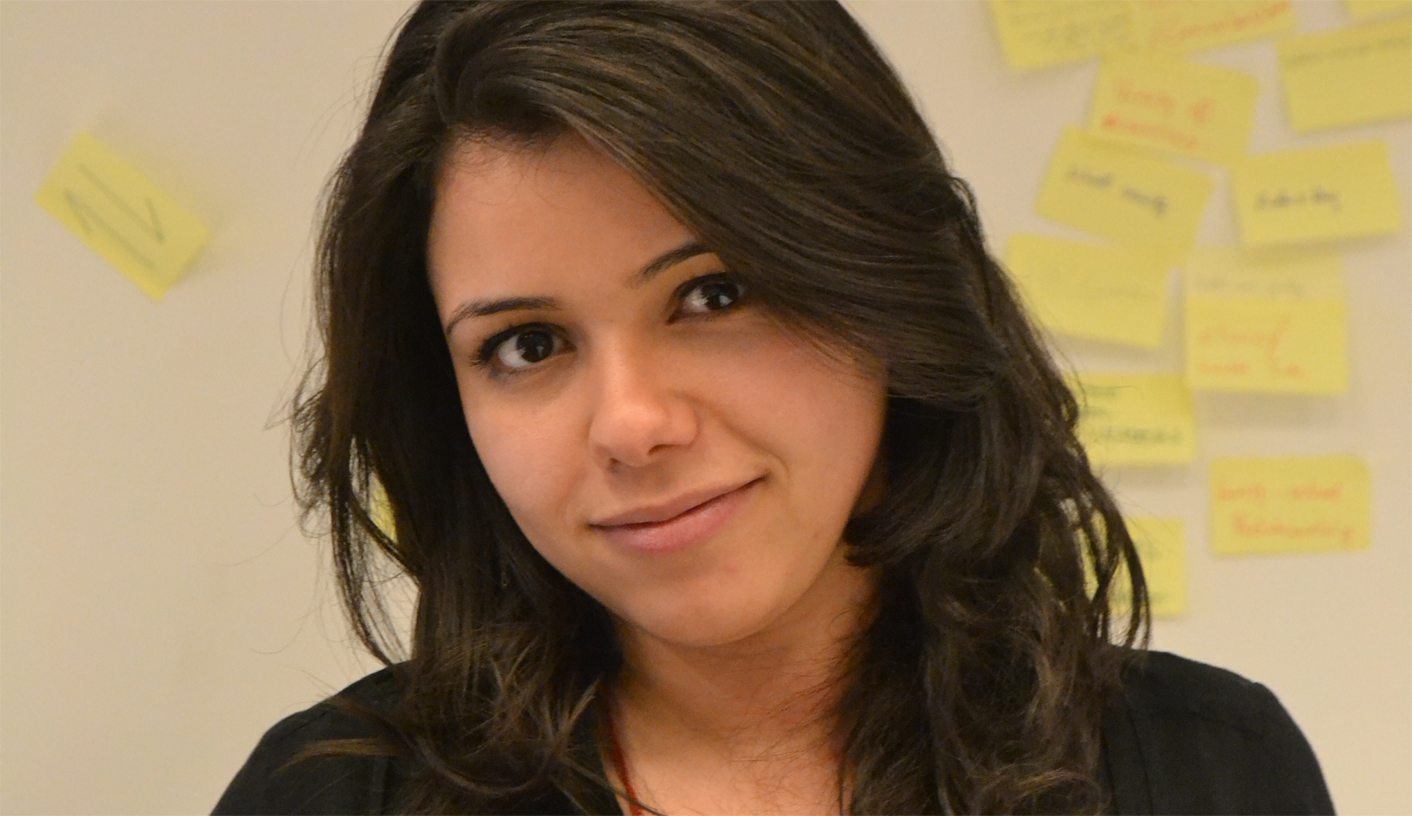 As part of a new Daily Maverick series profiling young, African leaders, we sat down with Aya Chebbi, a Tunisian blogger and activist. She is the kind of young person that inspires hope in humanity, a 'doer', an active participant in the society she has grown up in. And still she is warm, insightful, humble. Just don’t use the phrase “Arab Spring” around her. By KHADIJA PATEL.

During a panel discussion hosted by Civicus at the University of Witwatersrand last week, Jay Naidoo introduced Aya Chebbi, one of the panellists, as a young Tunisian woman who had experienced the great tumult of the “Arab Spring”.

“Please don’t call it the ‘Arab Spring’,” she said.

“The Arab Spring was a media construct,” she said. “In Tunisia we call it the revolution of dignity.”

Naidoo nodded, a look of understanding dawning on his face.

His introduction of the topic “Old Struggles, New Movements” stirred the audience.

The role of civil society was explored from South African, Zimbabwean, Brazilian and Tunisian perspectives. And Chebbi displayed a sensitivity to the struggle for a better world that invited curiosity about who she was.

A week later, I sat down to talk to her. Somehow she looked even younger than I remembered. But then, my perception of youthfulness may be skewed by an acute awareness of the imminent cessation of my 20s. It’s not that I am in a constant lament for some mythical prime of my life. Rather, I’m wondering when we stop thinking like young people: When do we lose hope that the world can be changed?

Chebbi is certainly not possessed with such concerns.

She is a young thinker. She is also a leader.

She describes herself as a young Tunisian activist, an amateur photographer, a blogger and a peace coach.

She’s been a peer educator on sexual health and HIV/AIDS. She’s also volunteered for the Red Crescent and following Tunisia’s revolution, she volunteered at the refugee camps on the Tunisian-Libyan borders during the war in Libya, working specifically with Libyan refugee children.

I ask her to explain what the problem with the term “Arab Spring” actually is.

She says, “I believe in everything we do, we should have ownership of what we do. Then by calling what we are doing, directing whatever interests are at stake from the other side. It’s unfair.

“So it’s basically media propaganda. Even the term Arab Spring undermines the importance of the revolution.

“We call it the ‘Revolution of Dignity’.”

“Imagine, from ‘Dignity’ to ‘Spring’,” she says with a wry chuckle.

“Some other people call it the ‘Arab Awakening’ and even a book with a lot of US scholars is called The Arab Awakening, which I find horrible.

“It’s as if we were sleeping and just woke up.

“It’s so undermining of everything we’ve been through.

“It didn’t happen overnight. It was the efforts of years and years of working-class activism and it just happened in 2011 for the reason of many factors: technology, youth…

“All these names don’t represent us and what we call it is not featured in the media.”

Chebbi has found that her own participation in Tunisian politics would be better directed through activism and education.

All this talk of the “Arab Spring” and revolution with a blogger, however, cannot avoid that other nagging theme: technology.

“Before the revolution I just had a photography blog.

“My dad was in the army so I couldn’t get involved in many things,” she says pointedly.

She says that while she did start blogging during the revolution, it was not until a trip to the United States that she began blogging with more fervour.

“I went to DC and I was expecting Tunisia has been for a year in the news – with all the propaganda they did – so I expected people to at least know where Tunisia is on the map and what is going on.

“And I was shocked,” she says expressively.

“You know, DC is a political hub of the United States and people don’t even know where Tunisia is. And they don’t make a distinction between North Africa and the Middle East and all these issues, religion and terrorism.

“I was actually following the New York Times, for example, or CNN, or BBC and correcting them for things they reported on Tunisia.”

Her decision to blog in English was made to reach an audience not ordinarily reached by other Tunisian bloggers.

“That passion to write about what is happening in Tunisia turns to writing about everything, write about stereotypes, everything.

“I love blogging,” she says with a smile.

And certainly when Tunisian politicians now roam around the blogosphere and other social media portals, actually taking note of what is being said there, blogs in Tunisia at least have expanded the space for political participation.

“I think blogging is a powerful tool to influence politics,” Chebbi says.

“We found recourse in blogging because the mainstream media did not report what is going on.”

She speaks animatedly about how the spaces open in blogging allow young Tunisians to discuss issues like the constitution – which is currently being written. And blogging, she says, is a catalyst of further political activism, gathering opinions from people whose voices may have been discounted in the formal process.

When she speaks about blogging and its effects on political life in Tunisia, her idealism is apparent.

But she is not naïve. She is quite aware of the challenges that face Tunisia.

And while some of activists may point at the current instability in the country and blame the new government, she does not. She expresses concerns that the current government shows signs of becoming an Islamist dictatorship but she shows an awareness of history, evidence of learning. She points out that all transitions are chaotic.

“How horrible it is now, it is normal,” she says of transitional governments.

And she says young people are still looking for the one big thing that drove them to revolt in the first place: jobs.

“Young Tunisians when the whole revolution started with that one symbol, the vendor who burned himself; it was a symbol of unemployment but it was more – that’s why we call it dignity; you want a decent life.

“You reach a point where you don’t want to keep taking money from your family, where you want to have an independent life and you feel there are good jobs and bad jobs but you studied hard to get that degree. And then you go and you have no work to go to, nothing to have a sustainable life.”

Young Tunisians, she says, are stymied by an education system that does not adequately prepare them for the job market.

She says the revolution won young Tunisians – the freedom to just breathe.

“We are trying to secure what we gained.” DM