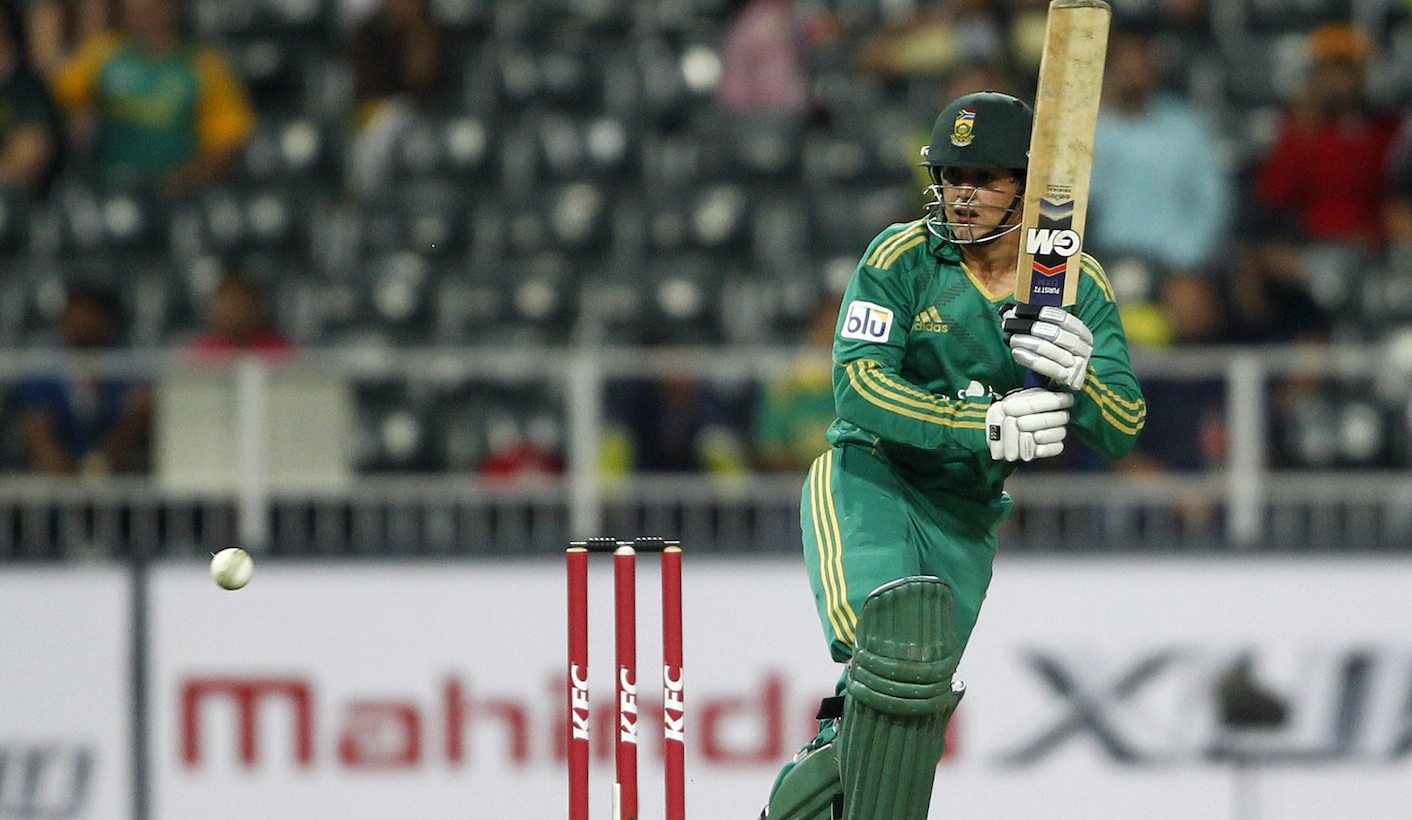 For once, South Africa aren’t beating around the bush about what they want to achieve before an ICC event. T20 skipper, Faf du Plessis, made it clear that the side aims to head into next year’s global showpiece ranked first or second in the T20 rankings. A clean sweep over Pakistan will put them on track for just that. By LYNN BUTLER.

South Africa came home from the United Arab Emirates with a 2-0 T20 series victory and huge boost of confidence after their win against Pakistan. Though climates and seasons have changed, South Africa is determined to keep the momentum of their successful UAE tour going on home soil.

The visitors have their backs against the wall and will want to reverse the stakes and start putting pressure on the South African side who outplayed them in nearly every aspect of the game.

At the hands of a fired-up South Africa, and much thanks to their own incompetence, Pakistan suffered a horrendous batting collapse in both matches. The hosts were bundled out under a hundred in the first T20 and even though they had batted valiantly in the second match, fell short by six runs after losing seven wickets in six overs.

It wasn’t all bad, though, and positive performances have come out of the T20 series in Dubai for both teams, although more positives for one team than the other. The only bright light for Pakistan was Umar Akmal, who provided some resistance against the South African bowling attack. The right-hander managed 60 runs in the two games, but his dismissal in the second match won’t inspire much confidence in his temperament.

Saeed Ajmal’s three for 25 in the second T20 came as a relief after none of the Pakistani bowlers seemed to be troubling the tourists. They managed just one wicket in the first T20 and five in the second and now have to make do without one of their strike bowlers.

Stilt-walker (and runner), Mohammad Irfan, suffered an injury in the second T20 and is left behind in the hope the hope that he’ll recover in time for Sri Lanka’s tour to Pakistan next month.

Pakistan’s biggest challenge is improving their constantly flailing batting.  With the bulk of the side having been made out of bowlers, Pakistan have brought in reinforcements in the form of Bilawal Bhatti and fast bowler Anwar Ali – both all-rounders.

Pakistan’s performance in the recent T20 series is a complete contradiction to what they managed against South Africa earlier in the year. Although they were playing against a rather inexperienced South African attack back then, the team did manage a total of 195 in March with both Ahmed Shezad and Mohammed Hafeez contributing handy knocks – something neither managed on Pakistan’s “home turf”.

It will be a big test of their resolve yet again with the South Africans starting to look like a much more completed unit. Quinton de Kock proved his critics wrong with explosive performances with bat and gloves in hand. The 20-year-old scored a blistering 48 not out and 30, and proved handy with the gloves with six dismissals including two stumpings. The ever-improving Dale Steyn took five for 35 and revitalised Imran Tahir four for 38 in their eight overs across two games respectively. The bowlers have been in fine form and their home stomping grounds will only add to their confidence.

One bone of contention is Hashim Amla’s return to the T20 fore. Amla has always produced consistent performances regardless of any format but T20 might not seem a fit for Amla’s batting ability. His flair is too comprehensive to trifle with the overnight sensation of formats, something which perhaps should be left  to younger and more inexperienced players.

The select few T20 specialists in that are in the mix, such as Henry Davids, David Wiese and Aaron Phangiso, have been largely overlooked and South Africa have opted for the side which won them the one-day games instead.

Davids was the only “specialist” player who has been given a chance (replacing JP Duminy in the second T20) but he failed to make an impact and was dismissed for a duck. Like the rest of the T20 specialists, Davids’ role in the current squad is somewhat peculiar, coming in as a replacement but never getting the recognition or the play time he rightfully deserves. Davids, a natural opener, was made to bat at six, which might be part of the reason for his struggles. His domestic form has been outstanding, having scored 400 runs in nine one-day games at an average of 44.44 for the Titans this season. In eight T20 internationals, he has scored two fifties – both of those coming on home soil against New Zealand earlier this year. His struggles in the subcontinent might be to his detriment since that’s exactly where next year’s World T20 will be played. South Africa might be searching for their comfort zone and while fresher face certainly will be welcomed, with just five T20s remaining before the tournament, experimenting isn’t exactly a luxury the Proteas can afford.

There are enough encouraging signs to suggest that South Africa are on track with their preparations, though. This time South Africa have inexperience that might provide the ‘secret ingredient’ for them to finally bag an ICC trophy. Half of the current squad have been to the 2012 ICC World T20 in Sri Lanka and will learn from their woes and hopefully not spread the ‘choking’ disease on any of the young guns coming through.

Equally encouraging is that skipper Faf du Plessis has grown in stature and has proven that he can take charge of an inexperienced team. Back in their school days, Du Plessis pipped De Villiers to the role. Du Plessis might not be challenging De Villiers for the role in the one-day format just yet, but at least in the shortest format of the game, South Africa have found a captain with an aura and who now just needs to continue his consistency with the bat.

Although it’s little more than a whistle stop tour, it should provide plenty of entertainment. Pakistan are known to have their bad days but when they’re on par one day, they can become one of the most destructive teams in the cricketing world. This T20 series might be valuable practice or it might just be a wake-up call to a ‘settled’ team. With less than 120 days left, South Africa will be looking to keep their winning momentum firmly intact. Only time will tell when either of the ticking bombs will eventually pop.

The first T20 starts on Wednesday, 20 November at Bidvest Wanderers and the second on Friday, 22 November at Sahara Park Newlands. All matches commence at 6pm (SAST +2). DM