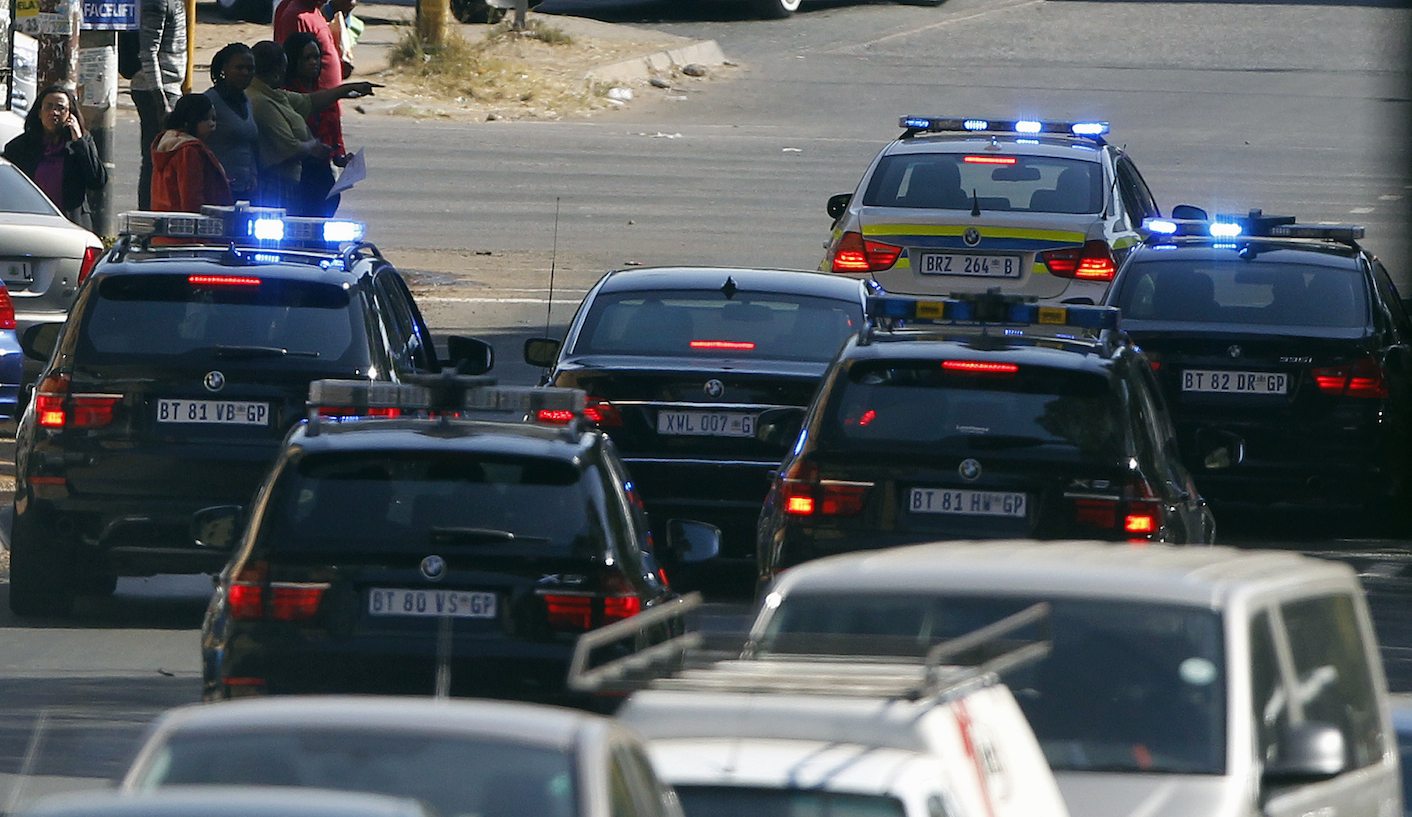 This one goes out to the brave policeman, that patriot in a black suit, who hung out of a speeding car to assault a young journalist for doing his job. You, sir, are a fine example of the kind of officer who should be protecting a country’s president. We need more men like you. Wait a minute; we already have an entire unit. By ALEX ELISEEV.

As far as dramatic clashes with the police’s VIP Protection unit goes, the latest one outside Nelson Mandela’s house was fairly low on the Richter scale.

Members of that unit and the notorious “blue light brigade” have been known to crash into cars, pull guns on motorists who couldn’t move over quickly enough, shoot indiscriminately, knock down kids on motorbikes, shove women onto the ground and threaten to “take out” journalists while breaking their equipment.

On Monday, I was on assignment with Reinart Toerien, a colleague from Eyewitness News. We had been dispatched to investigate a commotion outside Madiba’s Houghton home. A tip-off had come in that there were dozens of cars outside the gate. Our sources told us it was an unannounced visit by president Jacob Zuma. This was a big deal because we hadn’t had an official update on Mandela’s health in a long time and Zuma has, in the past, addressed journalists outside the house.

We arrived, parked well away from the gate and climbed out of our car. Around a dozen Tshwane metro police motorbikes were parked along the curbs, their owners relaxing nearby. There were as many marked police cars and several black VIP vehicles.

We had barely walked close enough to take photographs when a man in plainclothes, who claimed to be a policeman, threw out his arms and told us to move away. He was rude and aggressive, but never pushed us. I protested half-heartedly, telling him that we were on a public road and were allowed to photograph whatever or whomever we liked. He didn’t seem overly concerned about our constitutional rights. I knew full well he was an immovable object and we were merely going through the motions of an outraged journalist and the stone statue in front of him.

A moment later, every cop in the street suddenly jumped onto or into anything with an engine, fired it up and fell into formation. The gates to Mandela’s house opened and a new convoy of presidential cars drove out, heading down the hill. I was taking photographs on my phone and Toerien was to my left, capturing video footage. He was trying to catch a glimpse of the president through a car window to confirm what we had heard.

The next second, a black BMW 4X4 swung around and drove towards Toerien. The driver hooted, the passenger dangled out the window, screamed “voetsek” and tried to bash the camera out of the reporter’s hands. He missed, or couldn’t quite reach, and landed up slapping Toerien on the arm. The car sped away, disappearing with the pack. (The footage Toerien captured can be seen here.)

Toerien was all right. He hadn’t been badly hurt, only shaken up by what had transpired. But something about the incident immediately made my blood boil.

Journalists do push boundaries and sometimes get too close to the president. Sometimes, in the heat of the moment, there’s a push or a shove, which is not the end of the world. Overseas, journalists have even flung shoes at world leaders.

But in this case, the reporter was doing nothing wrong. He was far away and posed no danger to Zuma. He was in a public space while the president was in the safety of his state vehicle, with his usual convoy swirling around him. Furthermore, the officer had to physically stretch to take a swing at Toerien. He had to go out of his way to be a bully. It was unnecessary. It was stupid. And it was, as my editor later described it, disgraceful.

Not long ago, I covered US president Barack Obama’s visit to South Africa. Here was a world leader with real enemies, and plenty of them. It took half a day to pass through security to hear him speak at a Soweto university. There were so many agents and bodyguards it felt like a Matrix movie. But even so, those who protected him acted like absolute professionals. They spoke firmly but politely. They never pushed anyone or swore at a single person. They commanded respect and knew how to deal with the public. They made sure that you knew that if you stepped out of line a sniper would take you down, and yet there was not a single skirmish. There was not a single unpleasant exchange or heated moment. They carried the dignity of the man they were protecting.

Another colleague at work told me a story about being pushed by one of Mandela’s bodyguards and then witnessing Madiba reprimand the officer, telling him never to push a journalist again. But that was another era and another leader.

The Institute for Security Studies says the problem is that the politicians being protected don’t take responsibility or lead by example. They don’t do what Mandela did.

“The police recognise that their political principals don’t really care about professional standards and aren’t concerned about upholding the law and image of the police, and that they can get away with that kind of behaviour,” explains the institute’s Gareth Newham. “And unfortunately, very often they do.”

Newham says the politicians – from a provincial MEC right up to the president – can easily take a stand and say: “I do not accept this”. They can actually go as far as taking criminal action against those who break the rules. Surely, for a president, the way his bodyguards act is a direct reflection on him.

More and more Zuma has been portraying an image of a paranoid leader surrounding himself with questionable allies, using thugs as bodyguards and building bunkers that can detect lethal gas attacks. Exactly who he thinks is coming after him remains a mystery.

The “secrecy bill”, e-tolling and the R200-million worth of upgrades at Nkandla are, metaphorically speaking, government hanging out of a car window shouting “voetsek” to people in the street, many of whom worked hard to pay for the car and the bodyguard.

I asked Newham what it would take to make the VIP Protection unit less like the Elite bouncers who terrorised Johannesburg in the 1990s and more like Obama’s bodyguards? I suggested extra training, yogalates sessions, meditation or maybe some anti-anxiety medication when journalists get really pesky. Newham says it’s much simpler than all that and boils down to one word: accountability.

When these officers know that they can’t get away with assaulting reporters or members of the public, then they will stop. When criminal action is taken against them or when their principals crack down on them, then things will start to change.

But accountability is a mysterious and illusive concept in Zuma’s administration and we may be waiting a while, watching where we spill our drinks and how quickly we can change lanes. Toerien has laid a criminal charge against the officer who assaulted him. He’s taken us one step towards accountability. And you know what? We need more men like him. DM

Alex Eliseev is an Eyewitness News (EWN) reporter. Follow him at @alexeliseev