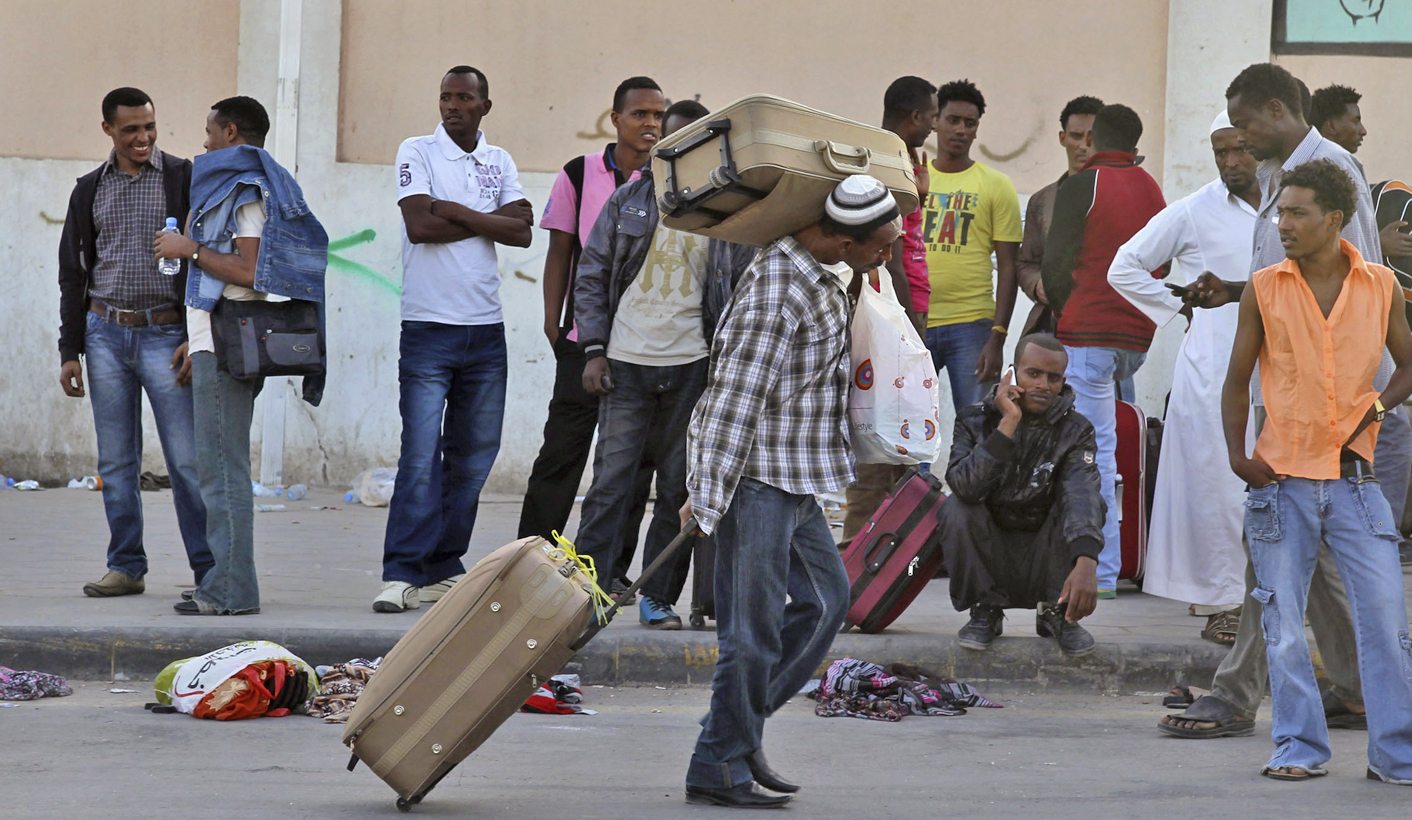 Five people died in Saudi Arabia last week as undocumented labourers clashed with Saudi authorities. The Kingdom is cracking down on undocumented foreign workers as part of its Saudisation programme and while change is definitely in the air, actual progress, measured against this crackdown, appears distant. By KHADIJA PATEL.

The Red Sea Mall in northern Jeddah is a temple of opulence, a cocoon of unabashed consumerism. For some, it’s a kind of paradise. Built on 242,200 square meters, the mall complex also includes a five-star hotel, a seven-storey office building and your pick of local designers, western couture and imported chain stores. It’s a place designed around the inclination for more, more, and yet more.

But it’s in in a place like this, a mall that is a little more than an hour’s drive from Mecca, where change in Saudi Arabia is plainly visible.

Anywhere else in the world, the sight of women managing a Body Shop is hardly reason to part with a few riyals in sheer celebration. Anywhere else in the world, the snobbery of saleswomen, looking bored and distracted while they stand watch over prohibitively-priced goods, is standard fare. But in Jeddah, it’s a sign that things are changing. And anyone who’s just woken from a 10-year slumber may be very, very surprised.

Saudis are increasingly taking up jobs that would have been the preserve of foreigners, foreign men particularly. And it’s not just Saudi men working jobs that would usually be imported. Saudi women too are visibly being incorporated into the formal economy.

In September 2012, the official unemployment rate in the Kingdom was stated to be 10.5%, but analysts say that considering only 36% of the population are counted as an active workforce, the actual rate of unemployment among Saudis is far higher.

In 2011, when unemployment benefits were introduced (part of a US$110 billion package to ward off any Saudi-born ambitions to join the Arab uprisings), about 3.5 million people applied. Suffice to say this was far more than the 500,000 the government had expected. There are said to be more than a million Saudis currently receiving the benefit.

When it comes to young Saudis, the challenges of unemployment are still starker: some 60% of the Saudi population is under 18. And while the unemployment rate for young men is about 30%, it is even higher for young women.

According to the Labour Ministry, the economy needs to provide 3 million new jobs for Saudi nationals by 2015.

This is no easy feat, as South Africa can attest.

Cue the “Nitaqat” law, part of the “Saudisation” programme, which makes it mandatory for local companies to hire one Saudi national for every 10 migrant workers. Over nine million migrant workers are estimated to live Saudi Arabia – more than half the work force – and about one third of the population. The precise number of undocumented workers is not known, but is thought to be a few hundred thousand at least.

In the last week, thousands of workers have been rounded up for deportation, some of them allegedly beaten, and clashes with Saudi officials have ensued.

The Telegraph quotes Saudi Arabia’s deputy labour minister Mufarrej Al-Haqbani as saying: “In the short term, the focus is on increasing jobs for nationals by substituting a part of eight million expatriate jobs in the kingdom.”

The programme, however, dates back to the 1980s, as it aimed to replace high-ranking foreign workers with Saudi nationals. The second wave of Saudisation in the labour market started in the 1990s with a 1994 ministerial decree which specified steps towards Saudisation: businesses were compelled to hire Saudis.

Fast forward to 1996, when an Iraqi-owned clothing boutique in a small mall in Madina, staffed largely by Indians, was forced to hire a Saudi national. The Saudi, who looked awkward and out of place, sat on a chair in a corner of the store and looked blankly ahead of him. His colleagues joked that the only job he was good for was a security guard.

Saudis were still not being hired in the private sector at a rate that could dent the unemployment figures – and more and more young people were also looking for jobs.

At the end of 2011, however, Nitaqat was instituted.

And so far, it seems to have gleaned more success than any of its previous iterations. Some 380,000 Saudis were reportedly placed in employment in the private sector by September 2012.

That same boutique has moved from the small mall to a chain of stores across Saudi: Its Madina store hires just one Indian national. The rest of the staff are Saudi.

It was, however, only this year that Nitaqat was enforced. A previous attempt to enforce the law saw widespread protests and strikes prompting King Abdullah bin Abdulaziz to extend the amnesty period for undocumented workers in the country by four months to 4 November. Workers were meant to get their paperwork in order in this time. And many did. Many more, however, were not able to secure the requisite documentation – though they’d been living and working in Saudi for decades.

And of course the effects of the enforcement of the Nitaqat law will not be contained to Saudi Arabia alone. Saudi is the second-largest source of remittances in the world: US$ 27 billion per year, with the vast majority of foreign workers in low-skill employment.

It is these workers who have been the most vulnerable to abuse.

It’s also these menial workers who have led the protests against the enforcement of the Nitaqat law.

According to Al-Bab, some 6,000 street-cleaners in Mecca, mostly from Bangladesh, mounted a five-day strike to protest against harassment by immigration authorities as well as non-payment of wages and poor working conditions.

With the enforcement of Nitaqat much of the kingdom’s pool of manual and semi-skilled labour are said to have been too afraid to show up for work, while others stayed away in solidarity with those who’d been rounded up for deportation.

In the meantime, services like washing bodies for burial, water delivery, and pumping out septic tanks have ceased.

According to The Economist, wholesale markets and city souks are operating at a fraction of normal turnover and more than half of 200,000 firms registered as building contractors have temporarily closed.

Saudi media reports that the street cleaners in Madina have been issued with “special IDs” to avoid further arrests from officials on the prowl for undocumented workers. Al Bab, however, says that it appears that “some over-zealous inspectors may be rounding up foreigners on the mere suspicion of working illegally – contrary to the assurances given by officials when the crackdown began”.

And the reality is that many foreign workers in Saudi Arabia are undocumented because the existing labour law infrastructure is oppressive. One up side for foreign workers with the new law is that soon the government will take control of expat recruitment agencies and organise the process of bringing expat workers to the kingdom.

The former labour minister of Saudi Arabia, the late Ghazi Al-Gosaibi, caused an outrage when he suggested that one way to cure unemployment in Saudi Arabia was to allow Saudi women to work as maids. And if the furore that erupted after that statement was not enough, Al-Gosaibi also took to working as a waiter in a local restaurant for a day in a plea to convince Saudis to accept low-status jobs. He was widely ridiculed.

Even on this score there seems to be a softening among Saudis, who are not likely to be employing their countrywomen as housemaids just yet. Still, when the low status jobs, like waitressing comes with some social capital of a swanky lounge, one young Saudi woman with multiple degrees has readily forfeited any further professional ambition for life as a waitress. Hers is just one example, but certainly a testimony of changing times in Saudi Arabia.

And when street sweepers in Madina stayed away from work in protest against the crackdown, Madina’s municipality chief picked up a brush to assist other Saudi officials in sweeping the streets around the Prophet’s Mosque.

It’s been described as an “unprecedented but largely symbolic move”.

To quote Bertrand Russell, “Change is scientific, progress is ethical; change is indubitable, whereas progress is a matter of controversy.”

And in Saudi Arabia, however indubitable change is, progress is still contentious. DM

Photo: An Ethiopian worker carries his suitcases, as he waits along with his countrymen to be repatriated, in Manfouha, southern Riyadh, November 10, 2013. Thousands of mostly African workers gathered in Riyadh on Sunday seeking repatriation after two people were killed in overnight rioting that followed a visa crackdown by Saudi authorities. One of those killed was a Saudi, said a government statement, and the other was not identified. An Ethiopian man was killed in a visa raid last week. Ethiopia’s foreign minister condemned the deaths, and told Reuters his government was working to bring its citizens home. REUTERS/Faisal Al Nasser