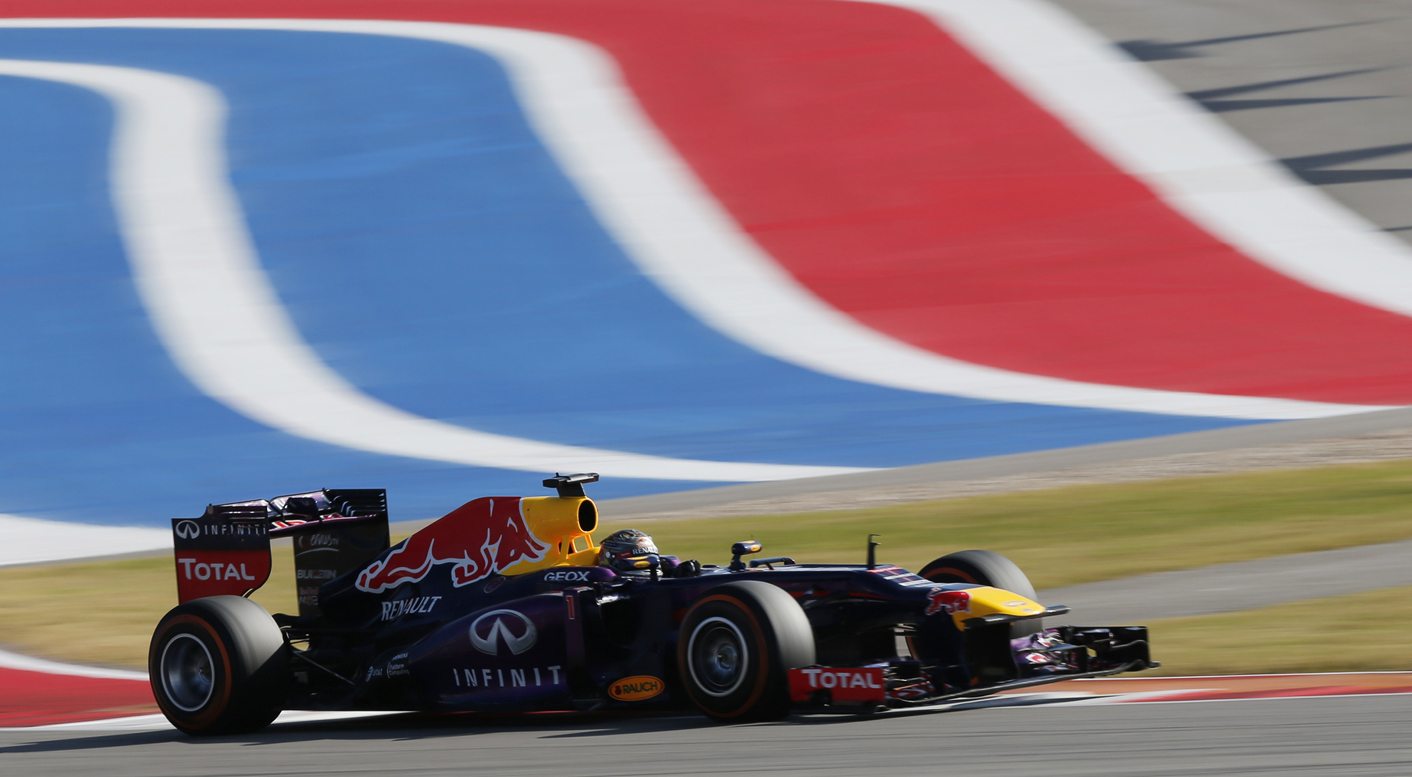 Starting from pole, the 26-year-old German was again in a class of his own, taking the chequered flag 6.2 seconds clear of Frenchman Romain Grosjean in a Lotus.

Vettel’s Australian team mate Mark Webber finished a close third in the penultimate race of his grand prix career and last in America.

The champion, who clinched his fourth straight title in India last month, is now one step away from equalling compatriot Michael Schumacher’s 2004 record of 13 wins in a season after collecting his 12th of the year.

Next weekend’s Brazilian Grand Prix is the last race of the season.

“I’m speechless,” Vettel told his team over the radio on the slowing down lap after his first victory at the Circuit of the Americas.

“We have to remember these days. There is no guarantee they will last forever,” he added, his victory coming a day after Red Bull team principal Christian Horner celebrated his 40th birthday.

“The car was fantastic. It was a bit tight at the start, Romain had a good start and I didn’t know if it would be enough,” said Vettel, who made his F1 debut at Indianapolis with BMW Sauber in 2007.

“We had good pace though and could control the gaps for eight wins in a row.”

Vettel had already equalled Schumacher’s mark of seven successive wins in a season at the previous race in Abu Dhabi. The all-time record of nine in a row was set by Italian Alberto Ascari but over two seasons in 1952-53.

Finnish rookie Valtteri Bottas took the first points of his Formula One career with eighth place for struggling Williams behind McLaren’s Mexican Sergio Perez, who is leaving the team at the end of the season.

Williams had scored just one point this year, with Venezuelan Pastor Maldonado, before Sunday.

Nico Rosberg was ninth for Mercedes and Jenson Button 10th for McLaren.

In a race with few thrills and spills, Force India’s German Adrian Sutil was the only retirement when he spun and crashed into the barriers on the opening lap.

The wreckage brought out the safety car for the first time at the circuit.

Vettel had stated earlier in the week he was not driven by records but his insatiable hunger for winning was on full display with another clinical performance.

Starting from pole for the second year in a row, Vettel did not turn a wheel wrong the entire afternoon and while his margin of victory was not nearly as massive as in Abu Dhabi, the German rarely had a hint of a challenge in his rearview mirrors.

Grosjean made a storming start, passing Webber into the first corner with Vettel ahead, and then enjoyed what he said was probably his best drive of the year.

Finnish stand-in Heikki Kovalainen, replacing Kimi Raikkonen for the last two races after his compatriot pulled out to have back surgery, lost positions at the start and then suffered a KERS failure. He finished 15th.

Grosjean’s precious points left Lotus still fourth overall but only 18 points behind Ferrari and 33 adrift of second-placed Mercedes. Red Bull have already won the constructors’ title for the fourth year in a row. DM

Photo: Red Bull Formula One driver Sebastian Vettel of Germany drives during the Austin F1 Grand Prix at the Circuit of the Americas in Austin November 17, 2013. REUTERS/Adrees Latif