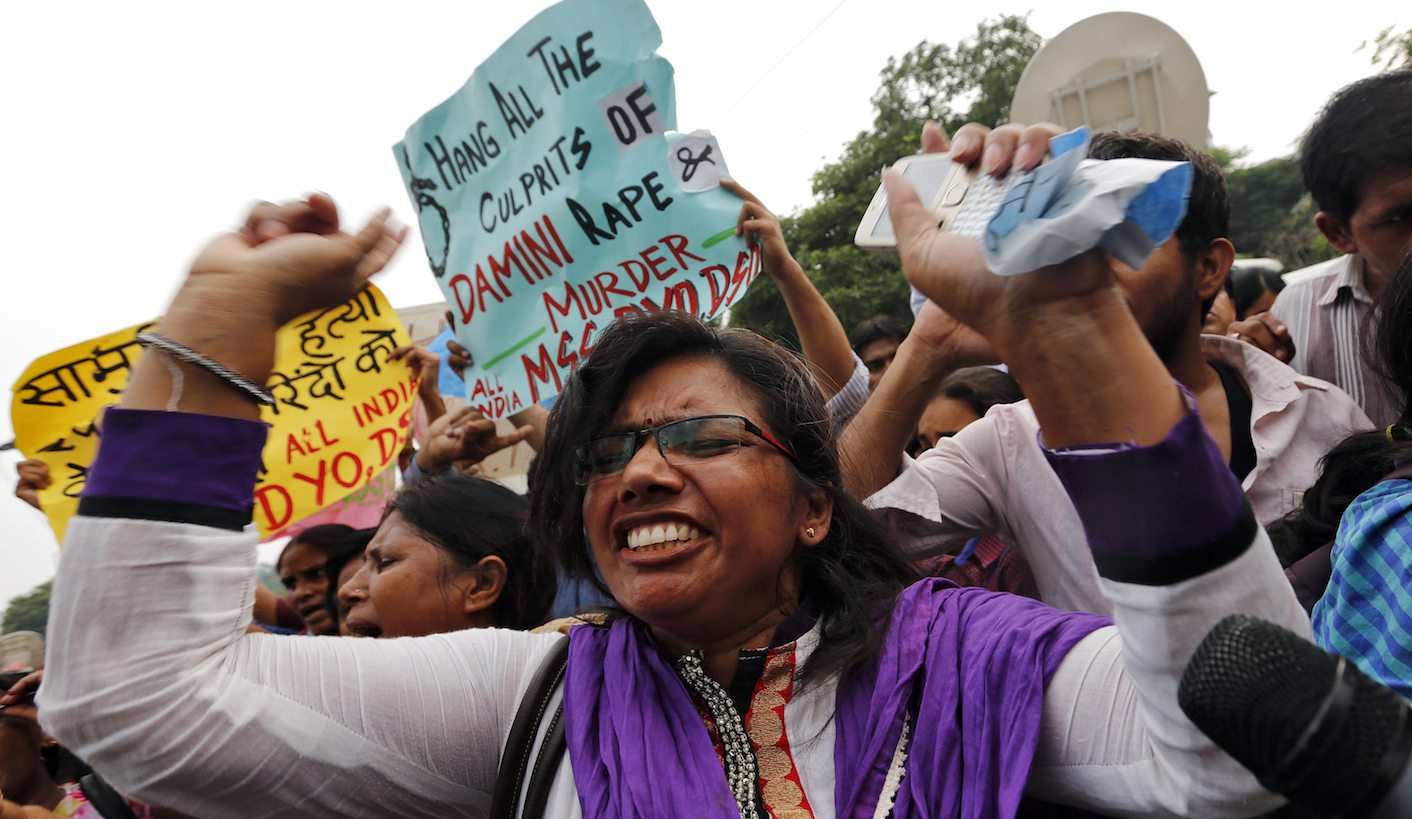 The brutal gang rapes and murders of a 23-year-old Indian student and South Africa’s Anene Booysen happened within less than two months of each other. Both cases received significant media attention and prompted declarations of public outrage. But in India the outcry was accompanied by significant, unprecedented mass protest against sexual violence in a way that simply failed to materialise in South Africa. An interesting discussion hosted by the Heinrich Boll Foundation on Thursday sought to unpack the social and political responses to the Booysen case. By REBECCA DAVIS.

In the media storm that followed the murder of Anene Booysen on 2 February this year, it was hard not to ask the question: Would this be happening to such a degree if an Indian case marked by a number of similarities had not provoked national horror in that country? To pose such a question is not cynical; it’s backed up by the cold, hard reality that what happened to Booysen was by no means unparalleled in recent South African history, but a number of those other cases have failed to make headlines in the same way.

In the Western Cape this week, a man is on trial for the alleged rape and murder of 16-year-old Charmaine Mare. The details of the court case now unfolding have received prominent attention from Cape Town newspapers, but Charmaine Mare is certainly not a household name in the way that Anene Booysen became. It is egregious to compare degrees of horror, but what happened to Mare was sickening. While on holiday in Kraaifontein from Mpumalanga, Mare was captured by a man who raped her, cut off her arms and legs with a bolt cutter, and then set her body alight. This happened just a few weeks before Anene Booysen’s murder.

One might try to argue that Booysen’s rape and murder tipped the country into a new sensitisation about these crimes, but the horror inflicted on 14 year-old Thandeka Madonsela in Soweto took place less than two months after Booysen died. Madonsela, too, was raped, disemboweled and murdered. Sure, there were media reports on the case, but it failed to become what seemed to be a rallying-point in the same way as Booysen’s rape and murder.

The question of why this was the case was something grappled with at a discussion at the Heinrich Boll Foundation offices in Cape Town on Thursday, where feminist researchers Joy Watson and Vivienne Lalu presented a paper they have written as one half of an engagement on the subject. The other half is taking place via the foundation’s offices in India, where a similar process is being undertaken to reflect on India’s response to the gang rape and murder of Jyoti Singh Pandey.

While Booysen’s murder certainly dominated public debate for a while, it failed to lead to the kind of mass protests witnessed in India after Pandey’s murder in December 2012. As Watson and Lalu note in their paper, there was a certain amount of small-scale social mobilisation: singer Annie Lennox led a protest march in Cape Town, for instance. But “what remains significant about the response to Anene’s death,” they write, “is that, unlike India, there certainly was no awe-inspiring moment of a people coming together to demand an end to rampant sexual violence”.

This wouldn’t necessarily matter if Booysen’s death had prompted a swift and decisive institutional response. But it didn’t. Bredasdorp, a sleepy town in the Overberg where Booysen lived and died, suddenly was positioned as if it were the epicentre of South Africa’s sexual violence problem – when in fact it is by no means exceptional. Nonetheless, because it was the site of the rape and murder, it became the focus for interventions. NGOs briefly descended on the town in what Lalu described as “a flurry of activity”, but which was disjointed and haphazard. In interviews with the researchers, Bredasdorp residents expressed their frustration with the type of civil society response which sees a group come in, do a workshop, and leave.

The major Bredasdorp-focused governmental response, meanwhile, was the announcement of an investment of R10 million in Bredasdorp’s construction industry as part of a job-creation scheme for young people.

This choice of intervention, Watson suggested on Thursday, was “in some ways just bizarre”, even though it was greeted positively by many residents. While researchers agree that violence against women often flourishes in situations of unemployment and poverty – and as such, job creation is welcome – it also particularly flourishes in situations of female economic powerlessness. To sink money into a male-dominated industry in response to Booysen’s murder, then, does seem a strange choice; especially because this type of initiative rarely leads to long-term, sustainable employment anyway. Lalu said that she had spoken to a woman who works within construction in Bredasdorp who told her that she was “constantly fighting to get a slice of the pie”.

More particularly, though, Watson and Lalu questioned why the money had gone into an initiative completely “delinked from the issue of sexual violence”. It appears that there has been little attempt to bring Bredasdorp women together since the attack. Feminist NGOs which once operated within the area lack the funds to do much meaningful work any more. Leadership roles that women are taking up within the community, Lalu said, are limited to “safe” positions: treasurer or secretary roles within the church or sports groups.

“Did things change in Bredasdorp?” asked Lalu. “No. If this was meant to be an opportunity to shift things, we haven’t seen any transformation.”

Community members also expressed embarrassment and shame to the researchers about the intense focus on Bredasdorp. “We had to work hard to get interviews,” Lalu said. “People are not only tired, but there’s also a sense of ‘must we hang our dirty laundry out again for everyone to see’.”

Rumours continue to swirl in Bredasdorp around who was really responsible for Anene Booysen’s rape and murder. Local youth Johannes Kana has been convicted of the crime and will hear soon what his sentence will be, but residents aren’t satisfied that he really acted alone. The researchers heard rumours of a cover-up: that children of prominent individuals might have been involved. It was alleged that blood had been found in another man’s car. In an attempt to rationalise and explain the extreme violence Booysen was subjected to, bizarre notions are circulating – like that Booysen had swallowed some drugs, and the intention was to cut her open to retrieve them.

Another community member told them that a woman called ‘Stompie’ had been raped and murdered in the Zwelitsha township in Bredasdorp shortly after Booysen’s rape and murder, with her body strung up on a fence. (The Daily Maverick was unable to confirm this case.) If this occurred, it attracted no media attention at all. Watson and Lalu said that this led to a kind of internalising of blame on the part of the residents: maybe it’s our fault, maybe we didn’t do enough to get this case or that case into the news.

The media reaction to the Booysen case also came in for scrutiny. Reports tended to focus on the gruesome specifics of what was done to Booysen, with little attempt to situate the case in the wider context, the researchers suggested. “Very little attention was focused on the contributing factors to violence against women like gender inequality and the structural roots of violence against women,” their paper states.

They also pointed out that little attempt was made to investigate what kind of a person Anene Booysen really was: she “was interesting only insofar as her body was a site for brutality and for the courtroom dramas that ensued after her death. Her thoughts and views, what she did and said, were largely inconsequential and certainly not newsworthy.”

This lacuna was unfortunately cast into stark relief by the coverage of the event which largely swept Booysen off the news map: the shooting of Reeva Steenkamp by Oscar Pistorius on Valentine’s Day, less than two weeks after Booysen’s murder. Watson and Lalu’s paper suggests that the treatment of Reeva, as contrasted with Anene, reveals “subliminal class and race dynamics at play”. The media delivered detailed reports about Reeva’s friends, lifestyle, views, activities and so on.

The problem with the failings of the institutional and social response to Anene Booysen’s rape and murder, and the circumstances which gave rise to the brutal attack itself, is that there is no “quick-fix solution”. What is needed, Lalu and Watson suggest, is a great deal more strategic thought and long-term, concerted policy implementations.

“If Anene’s death teaches us anything at all, it is that notions of masculinity, the underlying gender social order and the sexual entitlement of men are issues that require urgent social attention,” they conclude. DM

Photo: A demonstrator shouts slogans outside a court in New Delhi September 13, 2013. All four men convicted of raping and murdering a 23-year-old woman in New Delhi were sentenced to death on Friday, a decision the judge said sent a message to society that there can be no tolerance for such a savage crime. (REUTERS/Adnan Abidi)