Off with a bang: Proteas pummel hapless Pakistan

Off with a bang: Proteas pummel hapless Pakistan 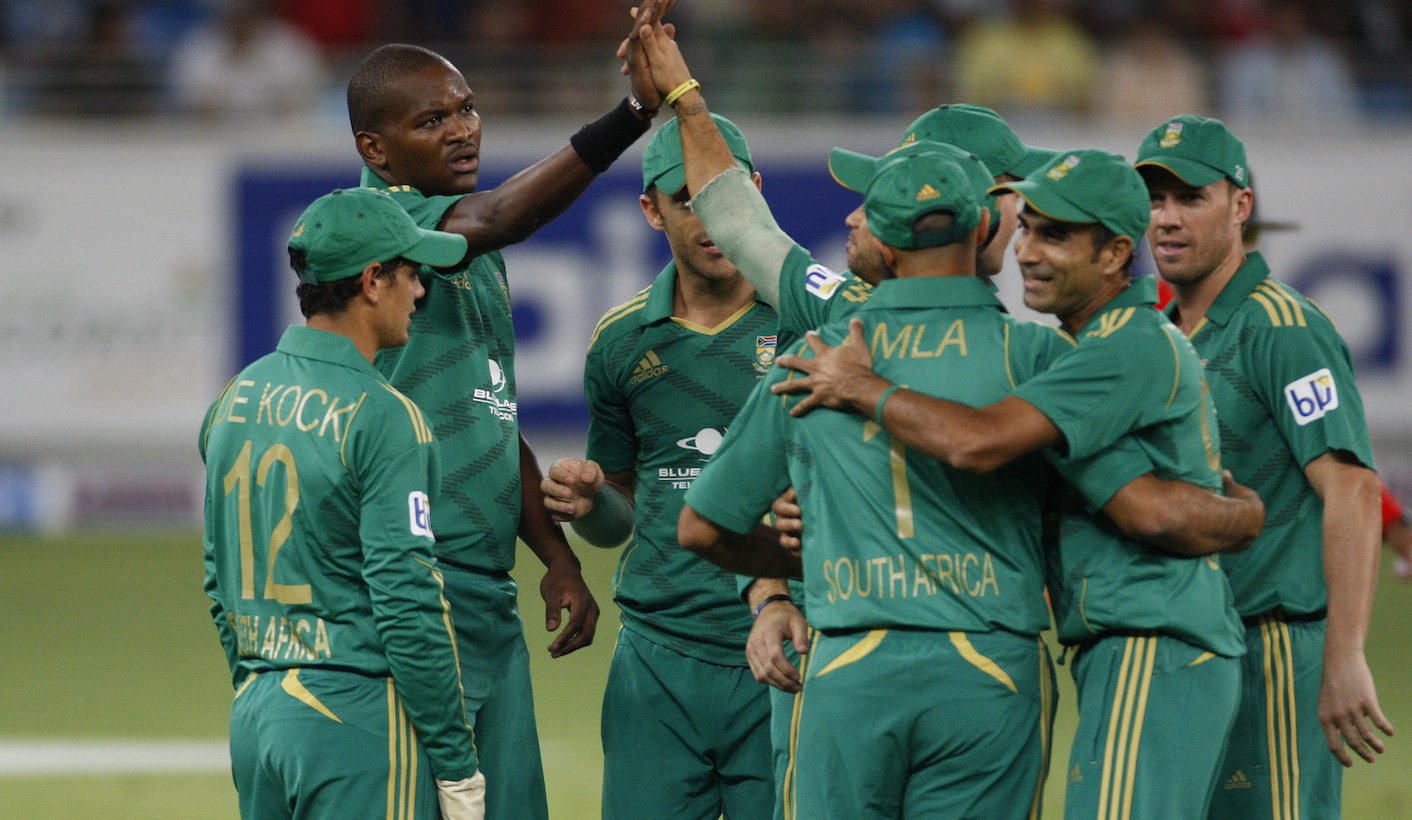 South Africa claimed a very convincing nine-wicket win over Pakistan in the first of T20 ODIs in the UAE. Dale Steyn, Lonwabo Tsotsobe, Quinton de Kock and Faf du Plessis all put in fine efforts to secure a clinical win. The Proteas’ final round of prep for the World T20 has started off with a bang, but it’s not entirely without things to ponder. BY ANTOINETTE MULLER.

Pakistan walked out at the Dubai International Cricket Stadium on Wednesday with five T20 wins on the trot and a chance to recover from the wounds inflicted by South Africa during the one-day series. They left with those wounds only exposed more, covered in vinegar.

After dismissing Pakistan for 98 in 20 overs, South Africa chased down their total with 33 balls still remaining and nine wickets. It’s not quite a chase in one-day cricket, but it was a small step towards showing some competence. Quinton de Kock, once again, showed that he is finally maturing as a player while Faf du Plessis slotted into his senior role without any blips.

De Kock, who had struggled against spin previously, looked far more settled against the slower bowlers, comfortably rotating the strike without any intention of playing unnecessary shots. De Kock, along with Du Plessis, combined for an unbeaten 83-run partnership with just Hashim Amla back in the duck out to claim a clinical and convincing win.

While the batting was cool and calm, it’s the bowling which really deserves the credit. Dale Steyn and Lonwabo Tstotsobe bowled with clinical precision and if T20 is pitted as the game where just one player can change a game, then South Africa are in a pretty good position to have two world bowlers at their disposal. Game changers are two words often thrown around, especially in the shortest format, but if these two men can stay fit and keep producing the goods, the Proteas World T20 prep is heading in the right direction.

Just six T20 games remain now before the showpiece in Bangladesh next year, meaning there is little time for the South Africans to tweak and tinker and while one game does not make a silverware-winning side, there certainly is some solace in what lies ahead.

Before the series started, Steyn spoke about how he wanted to be part of the T20 puzzle and he proved, once again, why he is simply one of the best players in the world – in all formats. His three for 15 was the third best figures for a South African bowler against Pakistan. Considering he had not played a T20 since December last year, his performance was truly phenomenal. It earned him a deserved a man of the match award, despite De Kock’s efforts both with bat and gloves. It was Steyn’s early dismissals which broke the camel’s back and set up the win.

He underscored his efforts with an intriguing subplot between him and Mohammad Hafeez. Hafeez has been dismissed by Steyn so many times that he himself admitted that “he doesn’t have enough fingers and toes for how many times he’s been dismissed” and celebrated with faux embarrassment, coyly covering his mouth before being swamped by his teammates as Hafeez walked off. For many, it was an irksome celebration; for Steyn, it was just good fun. It’s those kinds of interaction which adds to the intrigue of the game, provided it is taken in good spirits.

Alongside Steyn, Tsotsobe, who was smacked for 49 runs in the last T20 he played, produced a comeback that would have made Lazarus proud as he claimed his lowest economy rate since October 2011. Much has been said about his abilities, but the left-armer does have the knack of bouncing back when it batters and Du Plessis deserves credit for bowling him out up front and allowing Tstosobe to thrive in the strike bowling role he so relishes.

Concerningly, Ryan McLaren and Wayne Parnell struggled, even when Pakistan’s batsmen were trying to outdo each other at being bad. Between them, they conceded more than half of Pakistan’s total runs and allowed a team who was clearly struggle to get away just a little bit. On a day when the “right Pakistan” shows up, South Africa will not look as convincing as they were tonight. Time is not a luxury they have before the World T20 rolls around, but there is time for the T20 domestic competition for players to stake their claim, if the current members of staff continue to underperform.

The batsmen will not always be so lucky to have their frontline bowlers pave the way with a red carpet for victory and that very few had a chance to test their mettle in the shortest format is perhaps the only big concern South Africa have to ponder at the moment. Amla’s been included for the first time since the World T20 last year and he never really seemed quite at ease in the shortest format of the game. With Henry Davids having been earmarked to fill that role of opening, it is imperative that the selectors make a decision whether they want to take him all the way and fast.

The Proteas’ aim is to try to find the perfect puzzle for the World T20 and to win every game on their way there. They also still need to learn how to absorb and transfer pressure, something which they have not done so well in the past. However, if their last performance is anything to go by, at least the fixed puzzle pieces fit – now it’s just to find the missing links.