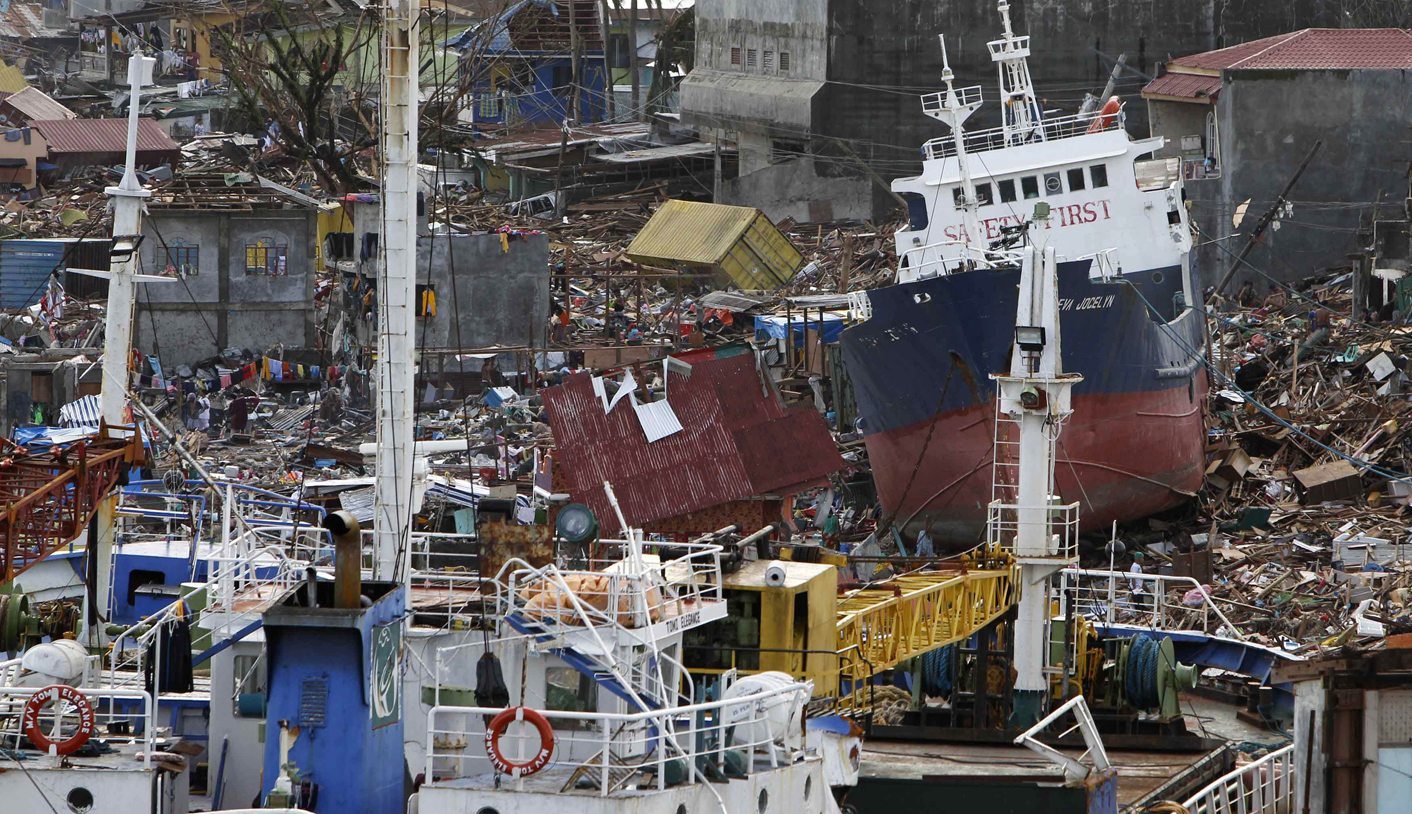 No single event can prove or disprove climate change – and anyways, we don’t have enough hard data from Super Typhoon Haiyan to reach unassailable conclusions. But that doesn’t mean that we, or the politicians gathered in Warsaw this week to discuss the issue, can ignore the circumstantial evidence – and the body count – that strongly suggest we have a real problem. By SIMON ALLISON.

There’s no way to know for sure if Super Typhoon Haiyan – the monstrous storm which devastated the Philippines this weekend, leaving entire towns flattened and upwards of 10,000 dead bodies in its wake – was caused by, or even exacerbated by, man-made climate change. There’s just not enough data on historical Pacific storm trends; nor is there enough accurate measurement of temperatures within the Haiyan storm system itself to reach a conclusive verdict.

Circumstantial evidence, however, certainly suggests a link between climate change and Super Typhoon Haiyan’s severity (some have described it as the most powerful storm in recorded history).

Exhibit A: As Haiyan began forming, sea temperatures were between 0.5 and 1 degree Celsius higher than normal in the waters east of the Philippines. Cyclones, hurricanes and typhoons (different names for the same weather phenomenon) draw most of their energy from the heat of surface water. The hotter the water, the more energy available, the stronger the storm. “We know sea-surface temperatures are warming pretty much around the planet, so that’s a pretty direct influence of climate change on the nature of the storm,” said Will Steffen, director of the Australian National University’s Climate Change Institute.

Exhibit B: The warmer waters contribute to warmer air temperatures; and warmer air is able to hold more moisture (from 4%-8% per extra degree). Every extra drop means there is more rain to be whipped around by the vicious winds, and increases the risk of flooding.

Exhibit C: The sea level off the coast of the eastern Philippines is rising at one of the fastest rates in the world – at times in excess of 10mm per year. This too makes flooding all the more likely, and more severe. In some areas, flooding from the aftermath of the storm reached as high as the treetops, destroying roads, buildings and communications infrastructure in its wake, and doubtless contributing significantly to the final death toll.

Exhibit D: Haiyan was not a freak or unique occurrence. In fact, this is the third year in a row that the Philippines has been struck by devastating storms of similar magnitude. In 2011, Tropical Storm Washi left more than 1,200 people dead as it sliced through the southern province of Mindanao. In 2012, in the same area, the even stronger Tropical Storm Bopha killed more than 600 people. 2013’s Haiyan continues the pattern – with an exponentially greater death toll. Climate change advocates have been warning for years about the dangers of an increase in extreme weather events. In the Philippines, at least, this theory is being supported by recent trends.

As indicated above, none of this is conclusive; but it certainly should raise concerns as the world gathers to discuss, once again, the problem of man-made climate change and what to do about it at the United Nations Climate Change Conference in Warsaw (COP19). The irony of the timing is hard to miss. “It seems these days that whenever Mother Nature wants to send an urgent message to humankind, it sends it via the Philippines,” commented Filipino academic and parliamentarian Walden Bello in the Philippines Daily Inquirer.

Bello, however, is skeptical that the fractious international community is going to anything more than argue amongst themselves and delay making any tough decisions. “It is doubtful, however, that the governments assembling in Warsaw will rise to the occasion,” he said, observing that both America and China are unlikely to agree any kind of mandatory carbon limits.

Bello’s not alone in his skepticism. The Guardian’s environment editor John Vidal was just as cynical: “From being top of the global political agenda just four years ago, climate change is now barely mentioned by the political elites in London or Washington, Tokyo or Paris. Australia is not even sending a junior minister to Warsaw. The host, Poland, will be using the meeting to celebrate its coal industry. The pitifully small pledges of money made by rich countries to help countries such as the Philippines or Bangladesh to adapt to climate change have barely materialised. Meanwhile, fossil fuel subsidies are running at more than $500bn (£311bn) a year, and vested commercial interests are increasingly influencing the talks.”

Meanwhile, in the Philippines, anger is growing at the failure of the international community to make good on those pledges to alleviate the impact of climate change. A thousand people gathered outside the US Embassy in Manila on Monday to demand climate justice – demands that are likely to fall on deaf ears, despite the devastating effects of consecutive super storms on the Philippines’ already fragile economy.

“Each destructive typhoon season costs us 2% of our GDP, and the reconstruction costs a further 2%, which means we lose nearly 5% of our economy every year to storms,” said Naderev Saño, the Philippines chief climate change envoy, at COP18 in Doha last year. “We have received no climate finance to adapt or to prepare ourselves for typhoons and other extreme weather we are now experiencing. We have not seen any money from the rich countries to help us to adapt…We cannot go on like this. It cannot be a way of life that we end up running always from storms.” DM