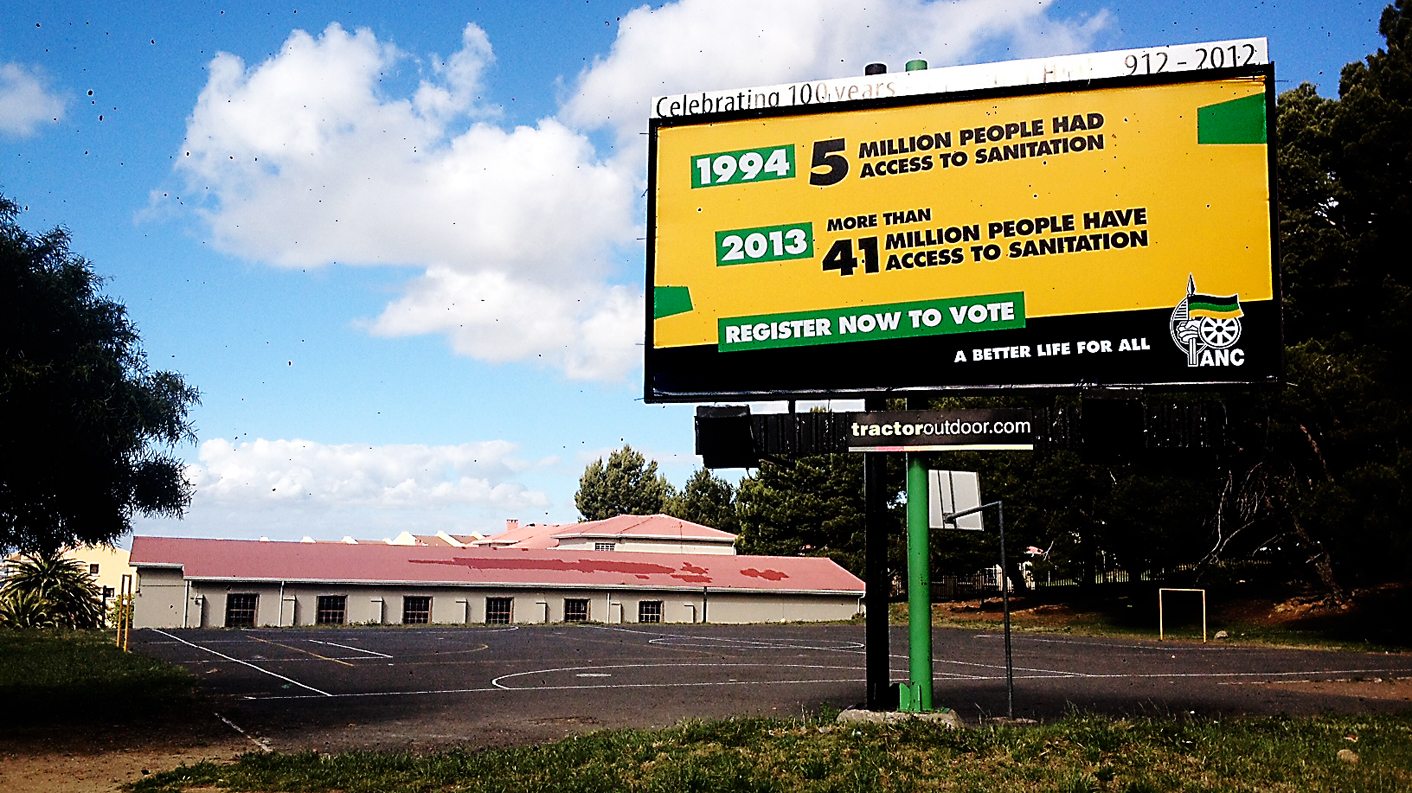 The African National Congress has claimed that 36-million South Africans have been given access to sanitation since 1994. If it were true, it would be a staggering achievement. But the claim is false. Researched by Raymond Joseph for AFRICA CHECK.

An African National Congress billboard  – which was erected illegally at a Cape Town school and then removed this week amid a storm of controversy – has stated that the numbers of South Africans with access to sanitation increased eightfold in the past 19 years.

The billboard – which called on people to register for next year’s general election in South Africa –  stated that only 5-million South Africans had access to sanitation in 1994, compared to 41-million in 2013.

Is the claim supported by the available data?

Africa Check asked Tom Moultrie, an associate professor of demography at the University of Cape Town and director of the Centre for Actuarial Research, to crunch the numbers.

By defining access to sanitation as having access to a flush toilet or chemical toilet and using census data from 1996 and 2011 – the closest to the dates on the billboard – the following emerges:

Moultrie  told Africa Check that it appeared that “the number presented [on the billboard] for 1994 seems to represent households, not people”.

“In 1996 there were 4.55-million households with access to sanitation. Perhaps that was rounded up to 5-million?”

“The effect is to exaggerate the service delivery of sanitation in the country over the past 19 years,” Moultrie said.  He added that there was “little reason for doing so” as the numbers of households with access to sanitation almost doubled between 1996 and 2011 and this “represents a singular achievement”.

The ANC’s Western Cape provincial secretary, Songezo Mjongile said the organisation stood by the numbers published on the billboard and claimed they were based on data obtained from Statistics South Africa.

“The ANC has changed the lives of people in terms of sanitation and housing. We stand by the figures that were published on the billboard,” he said.

Conclusion – The claim is not supported by the data

The ANC’s claim exaggerates its achievements over the past 19 years and is not supported by the available data.

As South Africa’s 2014 general election looms closer, political parties and politicians are increasingly likely to make inflated claims about their achievements. Any claims they make should be questioned. DM

Susan Comrie and Dewald van Rensburg for amaBhungane • 2 mins ago

Drastic restructuring on the table (again) to end Ascendis’s agony