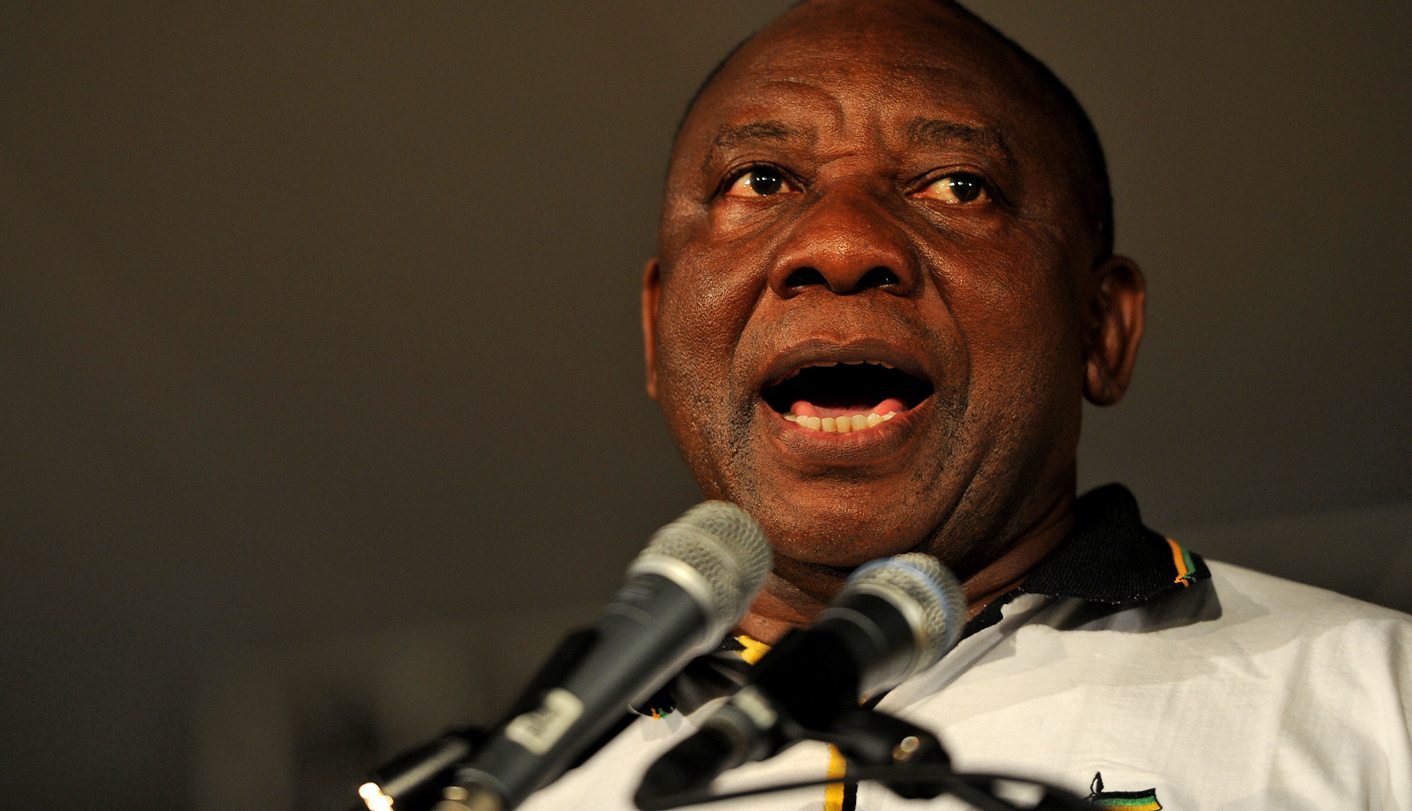 It’s election registration time, which means that South Africa’s political parties are slowly heating up the grill for the coming campaign. Cyril Ramaphosa has warmed things up nicely, by warning a potential non-voter that 'If you don't vote, the Boers will come back to control us.' Here we go… By RICHARD POPLAK.

The village of Seshego, in Limpopo Province, is one of those places destined to draw history’s short stick. Once the capital of the bantustan Lebowa, and about as under-developed as a place could be, it served as an employment meat grinder for Pietersburg, now Polokwane. That part of the country was so abused and neglected by the apartheid regime that come democracy, it apparently seemed wisest to keep the abuse and neglect coming. But Seshego is now enjoying a moment. Divided into eight sections, its first is the birthplace of a certain Julius Malema, erstwhile of the ANC, now head of the nascent Economic Freedom Front. Which is why the ANC deputy president Cyril Ramaphosa and his party have garnered a newfound interest in the joint, and why Ramaphosa himself was in the city, urging residents to register and vote for the party that delivered them a no-frills version of liberation.

But a member of the audience, we learned yesterday, was not so keen on registering. The Mail & Guardian and other news sites reported that a single, unemployed mother of three told Ramaphosa that she blamed Seshego’s high unemployment on the ANC, and that she had lost hope in the party. Here was Ramaphosa’s moment! Was the man that so many were thrilled to see return to the ANC fold because he represented a stable “back to business” approach after an extended bout of Zuma-itis about to let fly with a sterling piece of oratory, assuring this poor soul that the ANC, through a comprehensive strategy of service delivery to towns just like Seshego, combined with a renewed commitment to the manufacturing sector through a series of labour reforms and business stimulus, bolstered by the ANC’s new poverty alleviation programme called, lets say, “The ANC—Let’s Get You Working”, will transform Seshego not into a gleaming high-tech version of Dubai, but into its best possible self—a working class community relatively free of crime, that boasts of schools in which students use actual textbooks with pages inside them, and in wherein a single mother of three could rest easy that the future was not the dark yawning maw of hell that she currently believed it to be?

Instead, he said, “If all South Africans don’t vote, we will regress. The Boers will come back to control us”.

Ramaphosa, steadily revealing himself to be just another rent-seeking demagogue with a Breitling collection, reverted to the type’s standard defensive posture—poke with a flaming stick the deepest, darkest fears of those you hope to rule over, then poke em with a stick again. It doesn’t really matter that the Boers are more likely to run Argentina than they are South Africa, and it certainly doesn’t matter that there were some in the audience—and many in the country—who understandably equate whites (read: the DA) with apartheid. What matters is that he took the low road, and that the low road—especially when traversed with a Mercedes AMG purchased with that now-tainted Lonmin board money—produces results.

So, Ramaphosa has stirred what passes for a discussion in this country. City Press editor Ferial Haffajee Tweeted a sincere, rather baffled question shortly after the story broke on Sunday: “May I ask something in a non-aggro way? Is there a real fear that ‘whites will rule again’—that apartheid will return?” The replies were instructive. “Stunning that this is even being debated”, replied a foreign correspondent, and I envied him—dude, this is South Africa. It’s pretty much the only thing that ever gets debated, or flung about like a live grenade. Or used as a cudgel on single mothers in Seshego by a mining unionist, turned ANC SecGen, turned business magnate, turned ANC almost the top politician.

“Apartheid has never ended”, insisted another Tweeter, and again, that certainly seems like a valid point of view from someone who, like those good folks in Seshego, hasn’t benefitted from transformation. Singer/song writer/march organiser Steve Hofmeyr, presumably the leader of Ramaphosa’s Future Boer Republic, asked why whites and apartheid were necessarily mutually inclusive. (They aren’t, but Steve, there’s always Argentina bru). Others pointed out that it was demographically impossible for the “Boers” to rule again. (Perhaps. Although I suppose it was demographically impossible the first time either.)

So here were are, on the threshold of another milestone in our democratic journey, mired chest deep in the sort of filth that gives democracy a bad name. I feel fairly safe in making the following statement: the Boers, whomever exactly they may be, will never rule “again”. I feel even safer pointing out that those who feel like nothing much has changed in 20 years may simply be more sensitive to the trajectory of this country’s historical arc: it is follows an unbroken exploitative system that benefits a narrow elite, their patrons and their protégés, and discards those who don’t count. That lady in Seshego, in the scheme of things, doesn’t count. And Ramaphosa’s party cannot, will not, serve her interests, because they are designed to do no such thing.

Which is where the Boers come in. In a famous Pondering Panda survey (“A new wave of market research. Finally.”) we were informed that 46 percent of those asked believed that the DA would bring apartheid back if elected. Who the hell knows whether that is anywhere close to accurate? In fact, “accurate” no longer applies. That’s because we’re approaching an election in which, it would appear, a new, legitimate political threat is lurking in wait, all set to bring us back to the not-so-groovy 1960s, like an Austin Powers in short shorts bearing braai tongs. Cyril Ramaphosa has swept back the boerewors curtain and revealed the truthiness. Now that he’s got the hang of it, there’ll be much more where that came from. DM