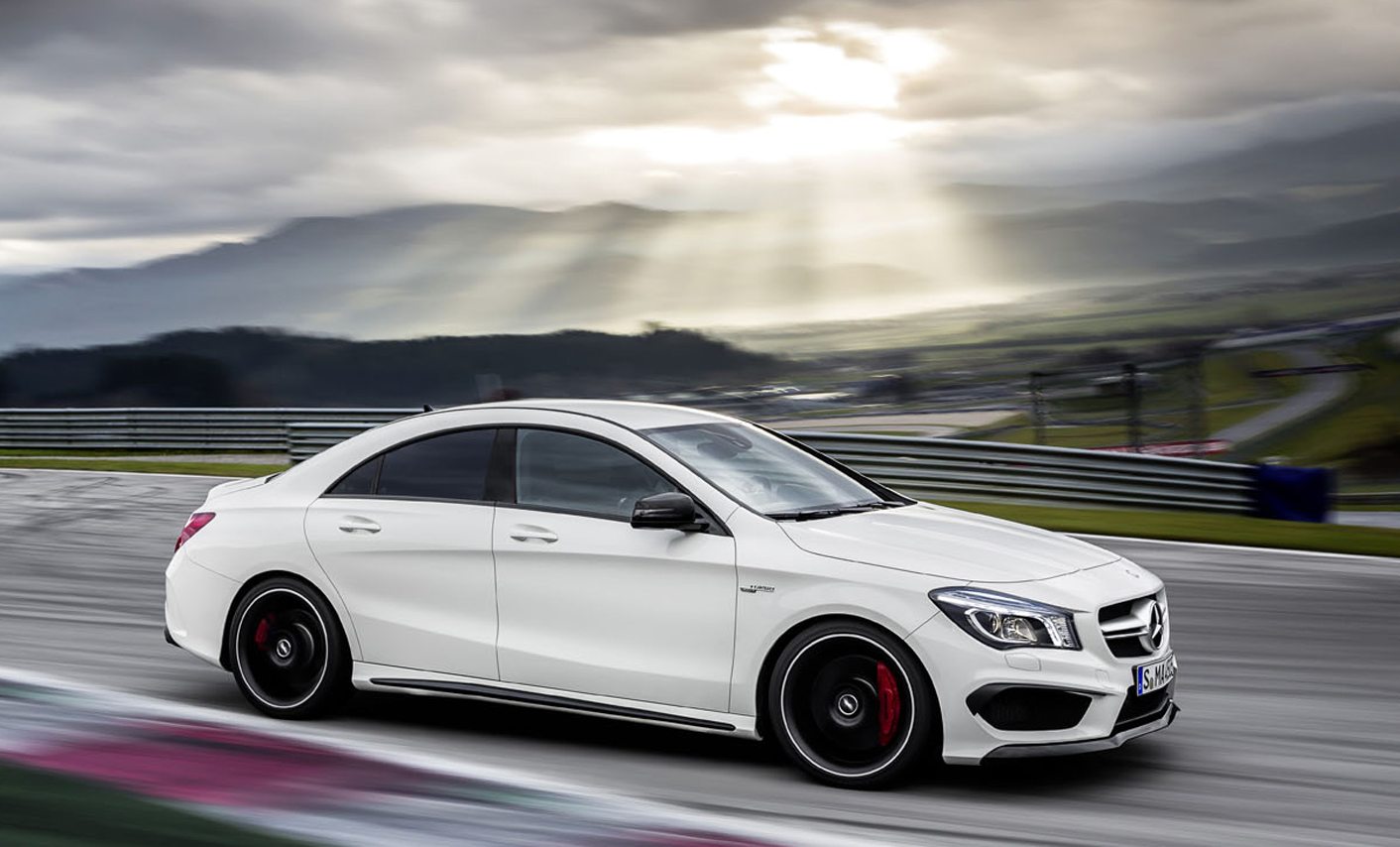 It’s taken Mercedes-Benz a long time to create a real presence in the premium compact car space. The all-new A-class is its first hatchback contender is this segment - and now there is the CLA: a compact four-door that, for once, steals the march on its rivals. By DEON SCHOEMAN.

There are two ways to look at the new Mercedes-Benz CLA: the newest and smallest four-door sedan in the Stuttgart auto maker’s stable, or a mini-me version of the CLS four-door coupé.

We’ve deal with the contradictory notion of four-door coupés before: Mercedes-Benz pioneered the idea of a sleek, low-slung car with the glamour and visual distinction crated by its coupé-like lines, but the space and practicality of a sedan.

The CLA designation suggests that the compact four-door follows the stylistic intent of the CLS in a more compact form factor – a notion confirmed by the newcomer’s distinctively curved waistline, the pronounced C-pillar, and the short, flowing deck of the boot.

Not surprisingly, the CLA also shares the large grille, adorned with a supersized Three-Pointed Star, with other latest-generation Mercedes-Benz products. In fact, the front end is virtually identical to the A-class hatchback that the CLA shares a platform with.

In other words, the CLA could also be considered the sedan version of the A-class – a description that’s certainly accurate on a technical level, since the two cars employ the same, front-wheel drive underpinnings.

However, in aesthetic terms, the CLA is the more distinctive, more Mercedes-like car, perhaps because the marque is a hatchback newcomer.

Regardless of how one considers the CLA’s identity, one aspect is undisputed: the CLA (and the A-class hatchback, for that matter) is a very real attempt by Mercedes-Benz to attract a younger target audience – something that rivals Audi and BMW have managed with great success with their respective A3 and 1-Series line-ups.

Premium compacts also offer existing customers of these brands a way to maintain their motoring standards in a smaller form factor – a trend that not only infers a lower acquisition cost, but also reduces conspicuous consumption. Not everyone needs a large and ostentatious luxury car.

Not that the specific CLA derivative under scrutiny here is subtle by any stretch of the imagination. It’s the range-topping CLA 45 AMG performance model, and as such is proudly endowed with the lower stance, the body kit, the bigger wheels and the louder exhausts that AMG-engineered Mercedes cars have become renowned for.

Frankly, the CLA 45 AMG benefits from the extra visual muscle. The big wheels emphasise the compact sedan’s relatively long wheelbase and wide tracks, so that the car looks poised and planted.

Add the snarl of the larger air intakes, and the bulge of the rear fenders, and the deep rear apron with its large-bore exhausts, and the CLA 45 AMG clearly means business.

That business starts under the lightweight bonnet of the Mercedes, where you’ll find an uncharacteristically small power unit – but one that remains true to the AMG performance ethos.

Still hand-built by AMG craftsmen (the cylinder head cover bears the name and signature of the person who assembled and fettled it), the turbocharged four-cylinder mill has a mere 2,0-litre capacity, yet delivers an eye-watering 265 kW of maximum power.

That’s 133 kW/litre, making it the most powerful production engine of its kind in the world. But then, the compact sedan is no lightweight: it tips the scales at just short of 1.6 tons, so it needs the engine’s punch to deliver the performance its AMG designation promises.

To harness the engine’s urge effectively, the CLA 45 AMG gets intelligent all-wheel drive, which seamlessly juggles the horses between the front and rear axles to ensure optimum traction. The seven-speed dual-clutch gearbox has also been given the AMG performance treatment, allowing rapid cog swaps via shift paddles behind the steering wheel.

As one would expect, the AMG treatment also includes a bespoke, beefed-up sports suspension, and large, cross-drilled disc brakes.

Settle in behind the thick-rimmed, suede-trimmed steering wheel, and it’s immediately clear that this car’s priorities are firmly focussed on performance. The high-backed bucket seats are racy but supportive, while the dashboard is trimmed in carbon fibre.

The centre console is home to a stubby gear lever, combined with a drive mode selector (comfort, sport, manual) and the switchgear for the infotainment system. A slim, fixed colour LCD display provides the visual interface for the system, which encompasses navigation, the sound system, and the trip computer, as well as vehicle set-up and control information.

Accommodation is spacious up front, but the relatively short wheelbase means that rear occupants aren’t quite as well looked after, especially in the legroom department. Even so, the CLA 45 AMG is a true four-seater, and a luxurious one at that. A 470-litre boot ensures ample luggage space, too.

Most of the obvious comfort and convenience features are standard, so it’s easier to point out what isn’t part of the deal. Perplexingly, the air-con system is manual, as opposed to the automated climate control you’d expect in this league (and which is offered on lesser CLA models). Also, the seats are manually adjusted – perhaps in line with the car’s hard-core persona.

But there’s no skimping on safety: you’ll find the usual full-house array of airbags, and the traditional active systems such as latest-generation ABS braking.

Twist the key, and the engine barks into life with unbridled enthusiasm. It sounds the performance part form the outset, with an angry burble that provides aural confirmation of its pent-up urge.

You owe it to the CLA 45 AMG to drive it in manual mode, and to switch the stability control system to sport, in order to give the chassis some leeway before the electronics spoil the fun. You also need to find a nice stretch of quiet, open road, ideally with some twisties included, because this Mercedes needs lots of space.

You can initiate the CLA 45 AMG’s launch control to get off the mark cleanly, and after just the slightest of hesitations, it surges off the mark with such intensity that you find you neck snapping back if you’re not expecting it. The engine gets to the red zone quickly, and first two gearshifts follow in rapid succession.

From third gear onwards, however, taller ratios mean that the acceleration loses some of its visceral intensity. Don’t get me wrong: the acceleration remains relentless, but it’s not quite as frenetic. Glance at the speedo, and you’ll see the needle run around the dial with almost ludicrous ease.

The CLA 45 AMG gets to 200km/h, and beyond, with such ease always feels ready for more than the 250km/h top speed the electronic limiter allows. And its inherent poise and user-friendliness tends to understate its pace, meaning that you tend to travel quicker than you think.

The claimed performance figures credit the compact sedan with a 4.6sec 0-100km/h sprint time, and it certainly feels slingshot-fast at first, although the initial pull-off feels a little tardy. Fuel consumption is very much dependent on driving style, and the optimum combined cycle figure of 7.1 l/100km claimed by Mercedes is almost academic – expect 11 to 12 l/100km if you tend to drive with gusto.

The chassis is a fine piece of performance engineering, ensuring that the Mercedes always feels controlled and confident, even when attacking corners. The electro-mechanical steering can feel a little dull at normal speeds, but weighs up nicely when pressing on, and allows accurate, informed inputs.

Yes, the suspension is on the uncompromising side of comfortable, especially on less than perfect road surfaces, and over undulating terrain. But because the chassis feedback is direct and unequivocal, the sedan never intimidates – the driver remains acutely aware of the its every move.

Still, those who place comfort and refinement ahead of razor-sharp handling and sledgehammer performance should consider the mainstream CLA models rather than the hard-core AMG derivative.

The CLA 45 AMG is, first and foremost, a performance sedan true to the AMG ethos. That it manages to exude the exciting dynamics and the high-tech mien that AMG’s larger machines have become renowned for is an impressive feat, as is the sheer power extracted from its comparatively small engine.

Right now, it’s also the only option for those motoring enthusiasts seeking a premium performance sedan with a compact form factor. BMW’s smallest sedan is the 3-Series, while Audi has just unveiled its A3 sedan, but won’t be offering a performance-focussed derivative for some time.

In the broader, non-AMG context, the CLA shape displays a certain level of brand authenticity that its hatchback sibling, the A-class, seems to lack, suggesting that the CLA could become the real seller.

Pricing will, of course, also play a role. At R674,400 before options, there’s nothing compact about the CLA 45 AMG’s asking price. But the mainstream CLA models start at R348,700, which is around R30k more than the A-class hatch – a small enough difference for Mercedes fans to opt for the booted version instead. DM