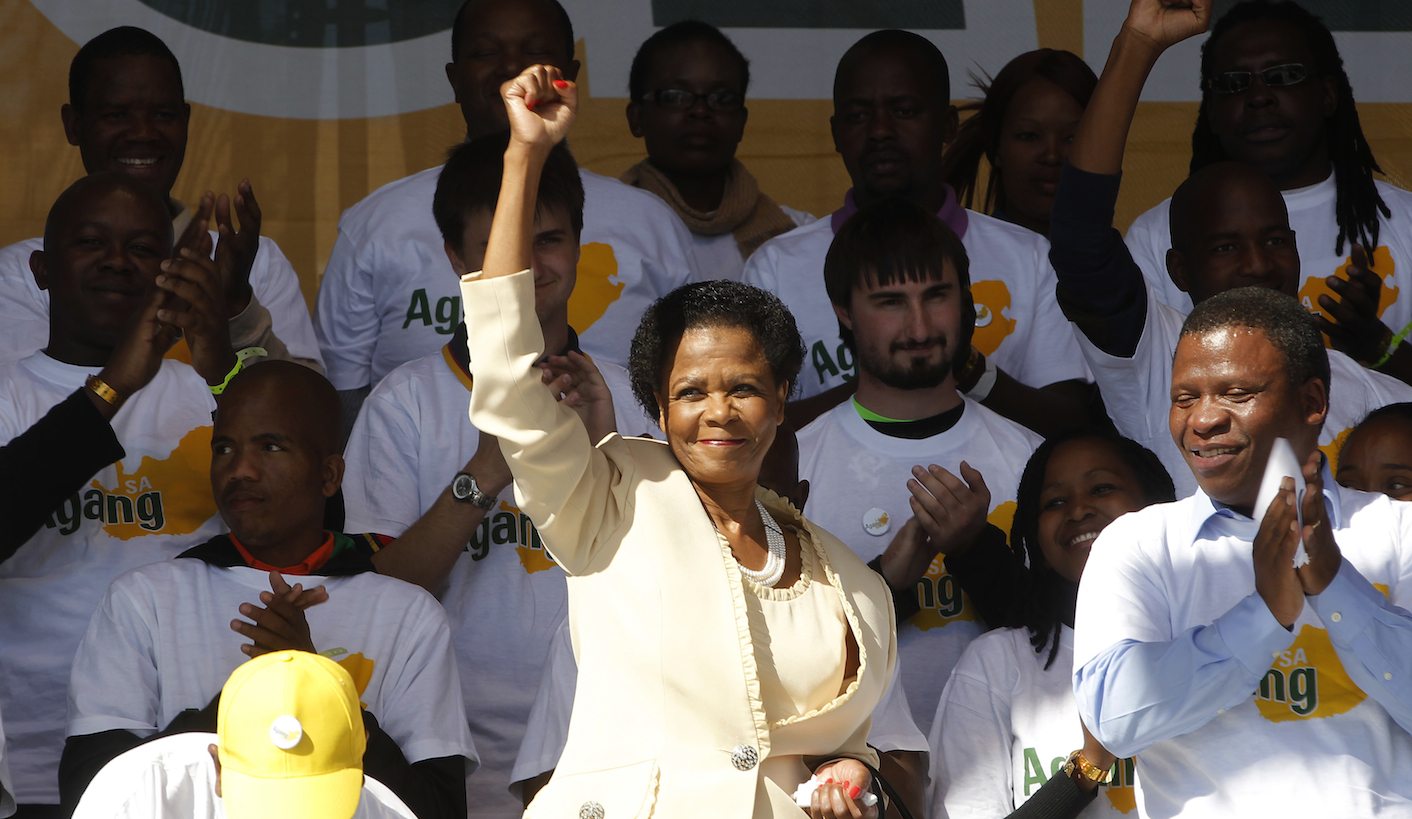 A swirling multi-coloured circle is the new logo of Agang SA, launched on Wednesday, along with the slogan “Restoring the promise of freedom”. The rebranding failed to attract any attention, even though the party breathlessly proclaimed that new logo “packs dynamic energy, presenting a party for all South Africans and inspires collective action for positive change”. If you know what that’s supposed to mean in the current political context, congratulations. We don’t. The fact is, in the nine months since Mamphela Ramphele launched her political platform, she went from being the next great hope to poor little rich politician struggling to get her voice heard. By RANJENI MUNUSAMY.

You have a big problem when you see Julius Malema as your competitor, hogging the spotlight that should rightfully be yours. Malema is never going to surrender that space, unless of course he gets convicted for corruption and goes to jail – and even that might take a while.

When businesswoman and academic Mamphela Ramphele announced her entry into politics in February, she was clearly of the view that she had the world at her feet. She presented herself as the new messiah, raging about the failures of the ANC government and reminiscing about the great dreams for our nation when it was born, which have now been shattered. She was the one to run a process of consultation and launch her political party on the back of mass discontent with the ANC government.

Trouble is, her script has not changed since then, even after the formal launch of her party, Agang SA, in June.

A few days before that, Malema announced that he would be launching the Economic Freedom Fighters (EFF), which from the very beginning had a very definite set of policies and objectives. Ramphele, on the other hand, did not. She has relied on her towering status and her ability to elegantly articulate all the country’s problems to carry her party along. As a result, following a brief honeymoon period in the media, Ramphele fell off the radar.

According to Agang’s head of communications Thabo Leshilo, they have been frustrated by the media either not turning up at their events, or attending and not reporting much. “The media does not find our events terribly exciting. In order to get attention, we must be like Julius and say ridiculous things to get in the papers. We are not that kind of party,” Leshilo says.

He says the party is focusing on campaigning and building structures on the ground, which tends to be a drag for reporters. “They follow EFF everywhere because of the things they say. That’s the nature of the beast,” Leshilo laments.

However, Agang’s reception in communities has been “very good”, he claims, which is why the party is “very bullish about the future”. Party funding has been “trickling in”, and because they do not have the budgets of established political parties, they have to work “more smartly” such as campaigning through social media, Leshilo says.

Agang has also been careful about using public amenities as there have been instances of “sabotage” by the ANC when halls were booked in advance, forcing Ramphele to address her supporters outside, Leshilo said.

So on the whole, full-time politics has not turned out to be a bed of roses for Ramphele and her team. The one time she thought she would definitely grab the media attention was when she declared her net worth of R55 million and called on President Jacob Zuma to do the same. Instead, the stunt backfired, with questions being raised about how she calculated the figure and how she accumulated her wealth. The ANC accused her of being a “skhothane” (a slang for a person who burns their money to show off). Zuma ignored her call and the issue subsequently petered out.

Ramphele has also been accused of hypocrisy for condemning black economic empowerment (BEE) as a failure, while she herself derived much of her wealth as a result of this policy. She has not been able to articulate properly what she sees as an alternative to BEE other than saying that it has not succeeded. When asked to clarify this, Leshilo said they want “BEE on steroids”.

Presumably this means that like every other party, including the ANC, they want economic opportunities to be extended to a wider range of people.

Agang’s rebranded this week was because their original logo was “done hastily” after the Independent Electoral Commission did not allow the initial design which included the South African flag. Political parties are not allowed to use the flag in their branding, although they can use the colours. The new Agang logo features the colours of the flag in 11 triangular segments – symbolising the 11 official languages – which form a swirling circle.

It may not have been worthwhile for the party start dabbling with branding now, as the few visible supporters they have sport t-shirts and other paraphernalia bearing the old logo. It would have made more sense to focus on what the party stands for rather than its swirling circle of policy confusion.

Political analyst Vukani Mde, who wrote a scathing assessment in Daily Maverick of Ramphele’s political ambitions after her initial launch, says the reason why the party is in a morass is because it was a bad idea from the start.

“Being unhappy is not the basis for a political programme. It is nothing but an ego-based party,” Mde said.

He says it is no surprise that Agang is being outshone by the EFF, as it has been difficult to decipher what Ramphele’s party stands for, who it is supposed to represent and who it is speaking to.

“Malema at least has a defined political and ideological identity. There is something there to engage or debate on, whether you support or deride him. Up to now, we cannot tell what Agang is about.

“If she (Ramphele) by some miracle is able to convince the vast majority of the population to vote for her, what sort of country would we wake up to? Because she is an academic, Ramphele articulates her criticism using much bigger words than Julius but politics is a lot more demanding than that,” Mde said.

He said the initial scepticism about Agang not being able to have mass impact proved to be valid, which is why it is battling to get media coverage and public attention now.

Of course Ramphele will admit none of this and would have us believe she is headed for Parliament with a determination to change the political dynamics of the country. But Mde points out that the South African Parliament, unlike the House of Commons in Britain and Congress in the US, is not the best place to build a political profile.

“It is where potentially good politicians go to die,” he says.

This is why Democratic Alliance (DA) leader Helen Zille prefers being the Western Cape premier instead of leader of the opposition in Parliament. It allows her to showcase her ability to govern rather than being restricted to tedious parliamentary debates and the useless exercise of butting heads with ANC MPs.

One wonders whether, deep inside, Ramphele regrets her decision to fly solo when Zille was ready to offer her the DA leadership on a platter. All the heavy lifting she is doing now could have been bypassed had she been willing to sacrifice some of her ego and work as part of a collective.

As things stand, Ramphele might have to be satisfied with a smattering of seats further down the line in the opposition benches in the National Assembly, only able to make one minute long speeches during parliamentary debates.

For a woman with so much to say, and so many smart ways to say it, that might be a too bitter pill to swallow. DM