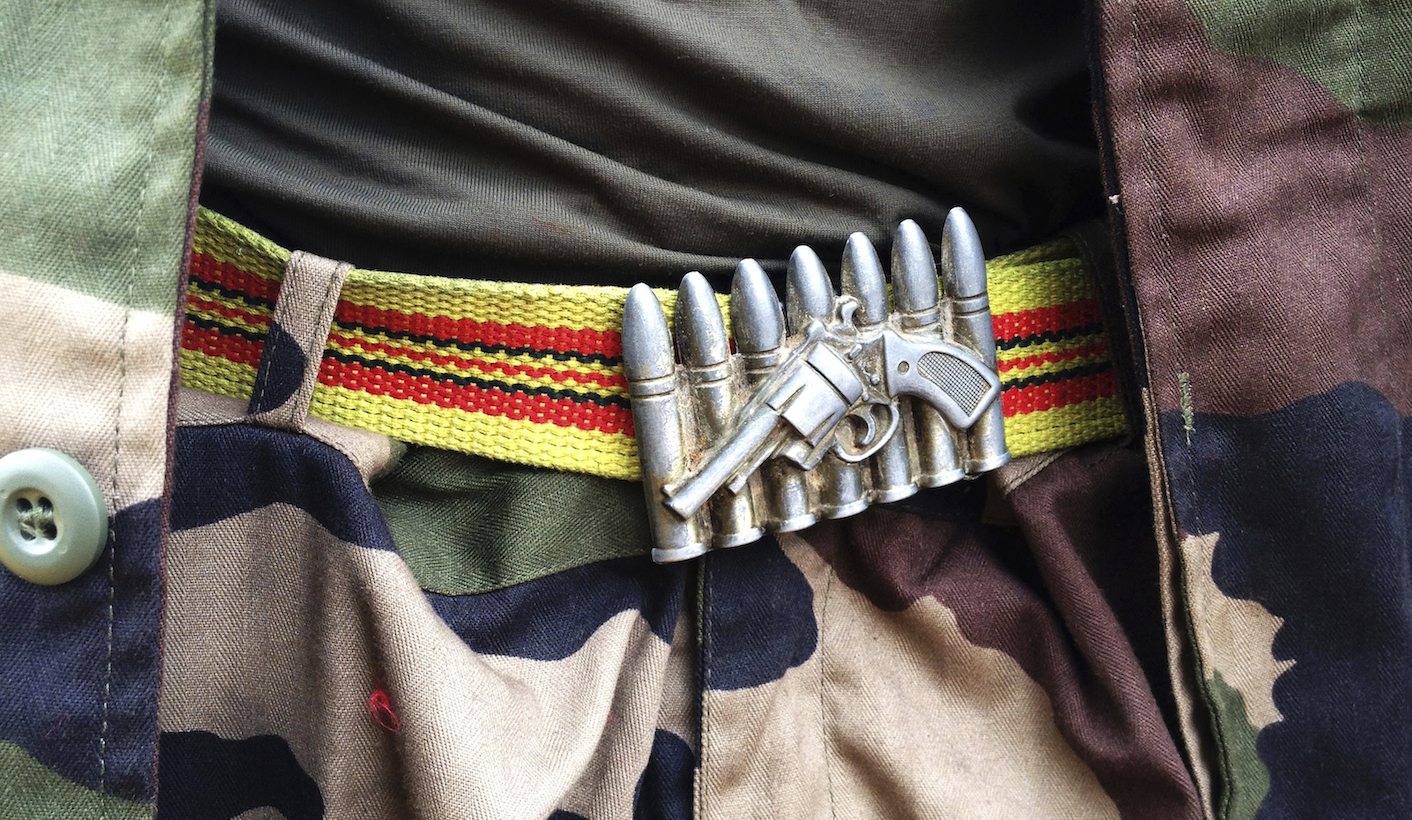 The CAR largely remains a battleground despite a peace agreement with armed groups and even an election on 24 December. (Photo: REUTERS/Ange Aboa) A soldier from the Seleka rebel coalition wears a belt buckle in the design of a gun and ammunition in Bangui March 29, 2013. REUTERS/Ange Aboa (CENTRAL AFRICAN REPUBLIC - Tags: MILITARY POLITICS CIVIL UNREST) - RTXY26V

As the state collapses into nothing, diplomats are warning that genocide in the Central African Republic can’t be ruled out as tensions between the Muslim and Christian communities stretch to breaking point. But even with the warnings, it is unclear if anyone can do anything to stop it. By SIMON ALLISON.

It has been a little over six months since President Francois Bozize was unceremoniously dumped out of office in the Central African Republic, his honour guard of hapless South African soldiers unable to protect him or the fragile, ineffective state he presided over – even though 13 of them died in an attempt to shore up his position.

In Bozize’s wake came the rebels, led by new President Michel Djotodia: a ragtag bunch of militants and mercenaries, lacking even Bozize’s tenuous hold the country. What little government there was has collapsed in the wake of the coup, with even the rebels fighting amongst themselves. Writing in the New Statesman, former BBC Africa editor, Martin Plaut, describes the country as “lurching towards total anarchy”, a place where extortion, beating, looting and rape are commonplace and where the government, outside of the capital, has ceased to exist.

If that sounds bad, it might be about to get even worse. Adama Dieng is the United Nation’s Special Adviser on the Prevention of Genocide. It’s his job to watch out for when and where genocide may occur, and he’s getting very nervous about the reports coming through to him from CAR.

“We are seeing armed groups killing people under the guise of their religion and my feeling is that this will end with Christian communities, Muslim communities killing each other,” said Dieng earlier this month. “If we don’t act now and decisively I will not exclude the possibility of a genocide occurring in the Central African Republic. The country has been totally destroyed. There is total chaos.”

Although Dieng’s genocide warning remains a prediction, and a distant one at that – “I will not exclude” is not the same as “I think this is going to happen” – it’s worth paying attention as conflict escalates across the country.

At the same time, we should be careful of reducing the complexities of the CAR situation into a simplistic and potentially misleading Muslim/Christian binary. Yes, relations between the two communities can be tense. Although the country is predominantly Christian, Muslims make up about 10% of the population (and most of that is in the north-east of the country, towards the border with Sudan). Yes, self-proclaimed President Djotodia and a healthy proportion of fragmenting rebel coalition are Muslim – raising the usual fears of majority groupings when a minority is perceived to have taken charge. And yes, much of the violence in recent weeks has had nasty religious overtones – although, in the context of everything else that’s been going on, these have not necessarily been primary motivations.

“But while religious tension is an important factor in some instances of violence, this framing is simplistic,” explains Tendai Marima in Think Africa Press. “For instance, along with Muslims from CAR and abroad, the Séléka also includes many non-religious rebels, other bandits and opportunists who have joined in the looting and vandalism since March. And while the rebels have committed some religiously-motivated atrocities against Christians, they are also driven by non-religious motivations and have attacked Muslim communities on occasion.”

In other words, with so much fighting happening, some of it is bound to pit Christian against Muslim. Of course, with religious sensibilities always so tender, there’s plenty of potential for the religious divide to be exploited by leaders looking to mobilise quick support – and that’s when Dieng and the United Nations Office for the Prevention of Genocide will really have their work cut out for them.

In the meantime, a better lens through which to view the conflict is as a fight for control of towns and villages between the Seleka coalition and the anti-balaka movement, a term used to described self-defence militias set up to protect communities against bandits, rebels, and poachers. These seemingly humble roots disguise the fact that the movement has grown into something more powerful, spurred on by deposed President Bozize, who continues to pull strings from his comfortable exile in Paris.

As fighting intensifies, civilians, as always, bear the brunt of the consequences. “This humanitarian crisis has been going on for over 10 months,” said Georgios Georgantas, head of the International Committee of the Red Cross in CAR. “Tens of thousands of people are still hiding out in the bush. Their situation is worsening by the day. They’re living in terror, deprived of food, water and medical care.” The United Nations estimates that over half the population are in need of humanitarian assistance.

It’s a grim, disturbing picture – and there’s no light at the end of the tunnel either. With the international community tied up in Syria, Afghanistan, Somalia and the Democratic Republic of Congo, among others – the situation in CAR is a distant, expensive priority. As Plaut concludes: “Despite the dire warnings of genocide and the deteriorating situation in the country, the people of the Central African Republic are likely to be left to their fate. Only a slaughter on the scale of Rwanda could really mobilise the international community…But this time no-one will be able to argue that the alarm bell was not sounded.” DM

Photo: A soldier from the Seleka rebel coalition wears a belt buckle in the design of a gun and ammunition. (REUTERS/Ange Aboa)