Vigilante killings: the erosion of public trust in the police and criminal justice system 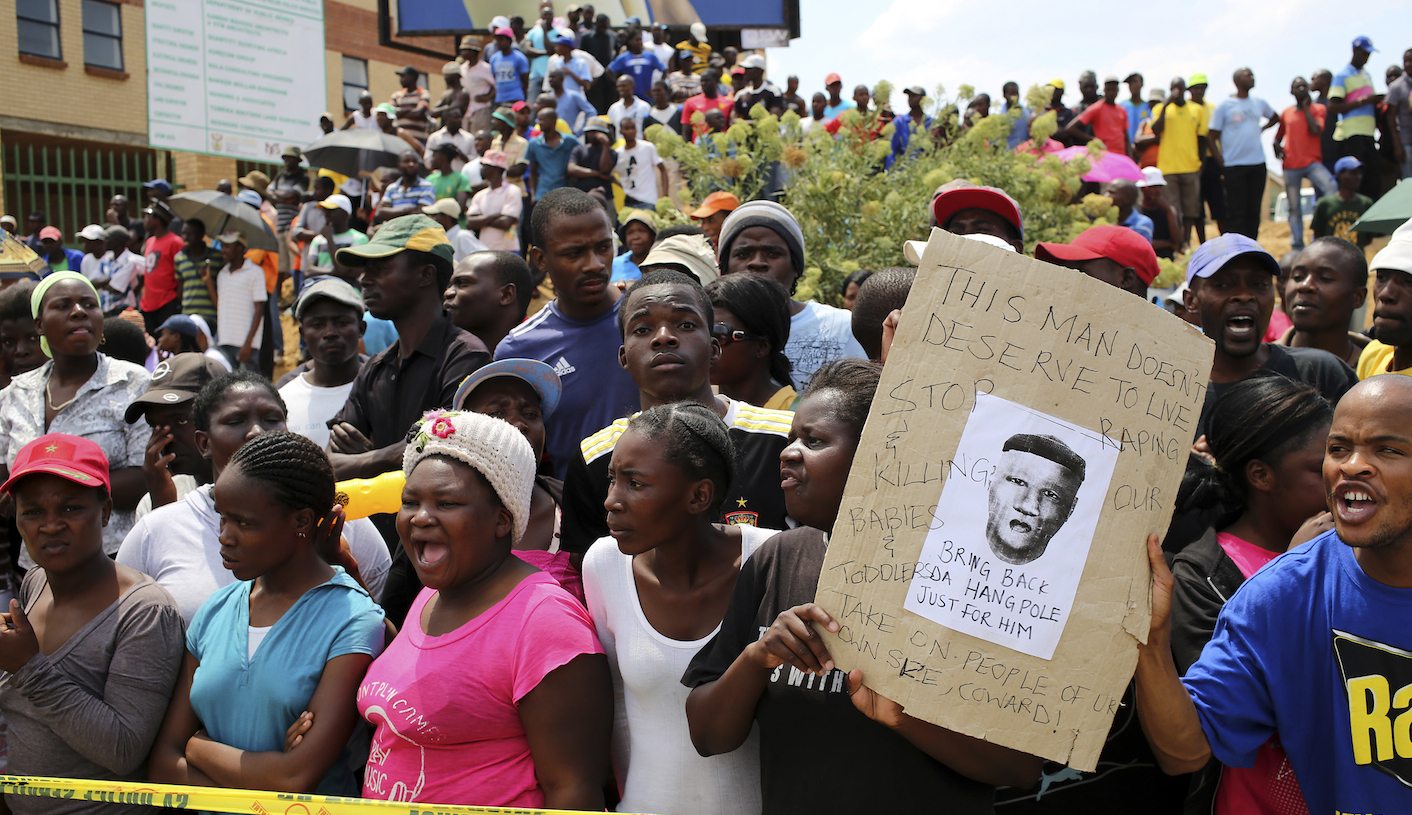 On Monday morning, headlines were dominated by news that six people had been killed in alleged vigilante violence in Khutsong. The incident is not isolated - vigilante violence has been a part of our lives for many years. Meanwhile, calls appear to be growing for the head of National Police Commissioner, Riah Phiyega, amid the usual complaints that the police force has become irredeemably politicised. President Jacob Zuma has also been accused, as usual, of politicising the National Prosecuting Authority. It's time to ask if there is indeed a direct line between Khutsong and the politicisation of our criminal justice system. By STEPHEN GROOTES.

The last few years have not been kind to our police service. First it had to get its chest out and its tummy in as it became a “force” rather than a “service” while everyone changed ranks. Then there was Marikana. And Mido Macia. And Andries Tatane. Meanwhile, the force has had change at the top on an unprecedented scale. Jackie Selebi went through a trial and left, Bheki Cele departed in disgrace as perhaps the most tarnished of all South African chalices was handed to Riah Phiyega.

In the meantime, Richard Mdluli has occupied the headlines more than your average head of Police Crime Intelligence. And the litany of corruption cases from the police has kept coming. First the looting of the Crime Intelligence Fund, then the use of high office to listen to phone calls that are really no one else’s business.

Then there are the lessons of Macia and Tatane. No one who committed a crime while wearing a uniform has faced any kind of severe punishment in public for what happened.

Day after day, it’s basically bad news for the police.

Meanwhile, over at the NPA, things have been no different. There President Jacob Zuma appointed advocate Menzi Simelane to run the show. It was immediately plunged into chaos, amid what appeared to be plans by Simelane to restructure the authority. Eventually, the Constitutional Court struck down his appointment, employing the iciest judicial language available.

Simelane was simply offered another government job almost immediately, and certainly didn’t appear to face any action in public for not being a “fit and proper” person to run the NPA.

In the meantime, the NPA lost the Tatane case. It lost the Fidentia case in the court of public opinion, while winning it on the letter of the law. It was able to at least win a conviction for the murder of Anene Booysen. But no one has really explained how what seemed to be a gang rape ended up with only one person being charged.

In short, the public image of our criminal justice system is that if you wear a police uniform you do not have to fear justice and you are not to be trusted.

But does that really translate into vigilante justice?

First, it must be recognised that South African society has always been plagued by vigilantism. It’s a society that has been violent for a very long time, and vigilantism is but one offshoot of that violence. Because of this systemic, historic violence, people who “know” that someone is a thief are more likely to hit out at that person in this country than they are in most other countries.

To add to that, it would be wrong to assume that things were somehow “different under Apartheid”. Police certainly did not enjoy any legitimacy. Ensuring our police did have legitimacy after 1994 was always going to be one of our nation’s toughest tasks. The police were seen as the oppressor, and the courts just an extension of that.

So, with the even the best will and leadership in the world, it was always going to be hard to discourage and stamp out vigilantism in our society.

The argument could also be made that stories around the politicisation of our police force may make the front page of the Business Day, but that is not exactly the top topic of conversation in Makaza or Khutsong. However, there is a counter-argument.

It’s true that high legal arguments from law professors may not be followed that avidly in the entire country. But it’s also true that the stories around Simelane and Cele and Selebi and Phiyega and Mdluli have certainly made it into the news bulletins of the SABC radio stations that really matter. Those that broadcast in Xhosa and Zulu. And don’t forget, there’s also the Daily Sun, which first broke the Macia story along with a picture of the video footage a witness had captured. Tatane’s death, too, was caught on television by the SABC.

The same would hold for the NPA. Pretty much everybody has reported on its recent travails. It’s not a story you can really ignore. It would make that 70% quota way too obvious.

Which does also strengthen the case that perhaps what we’re seeing now, nearly twenty years after democracy, is somehow linked to the politicisation of our criminal justice system.

When you examine it closely, it’s really about trust. If you trust the system implicitly, if you feel in your bones that the drug dealer who got your child hooked will face justice, you will go to the police station, and wait for them to do their work. Instead if you believe that those very same police officers will abuse you, that there’s nothing you can do about it, and if you believe that as a result the very same drug dealer will hook your second child as well, it would be hard to expect you to just sit back and let it happen.

But for this argument to succeed requires some kind of straight line between “politicisation” and public trust. It could certainly be argued that the best people have not been appointed to key jobs.

Selebi, Cele and Phiyega had no policing experience. The highest court in the land has pronounced upon Simelane’s fitness for office. This argument would also have to prove that these appointments have had a direct affect on the police and how it is viewed by our communities.

People at the top are symbols, like the president is the symbol of this country and Helen Zille is the symbol of the DA. And symbolism does matter, because people do judge organisations by their leaders. Think of Pravin Gordhan at SARS or Thuli Madonsela at the Public Protector’s office.

So, it can be assumed, to an extent, that there is a link between these appointments, for political reasons, and levels of trust. Which could then give us that link back to vigilante violence. But it would have to be accepted that it is certainly not the only reason.

Stephen Grootes is the Senior Political Reporter at Eyewitness News and the host of the Midday Report on Talk Radio 702 and 567 Cape Talk. At one point Julius Malema would have featured on the cover of his new book, SA Politics Unspun. But instead he got himself expelled, ending with a brief mention.

Photo: Protesters hold a placard with an identikit image of a suspect, as they gather outside a local police station during a protest in Diepsloot October 18, 2013. Hundreds of South Africans burned tyres outside a township police station on Friday and demanded the handover for vigilante justice of a fifth suspect arrested for the rape and murder of two toddlers, a crime that has shocked the nation. (REUTERS/Siphiwe Sibeko)