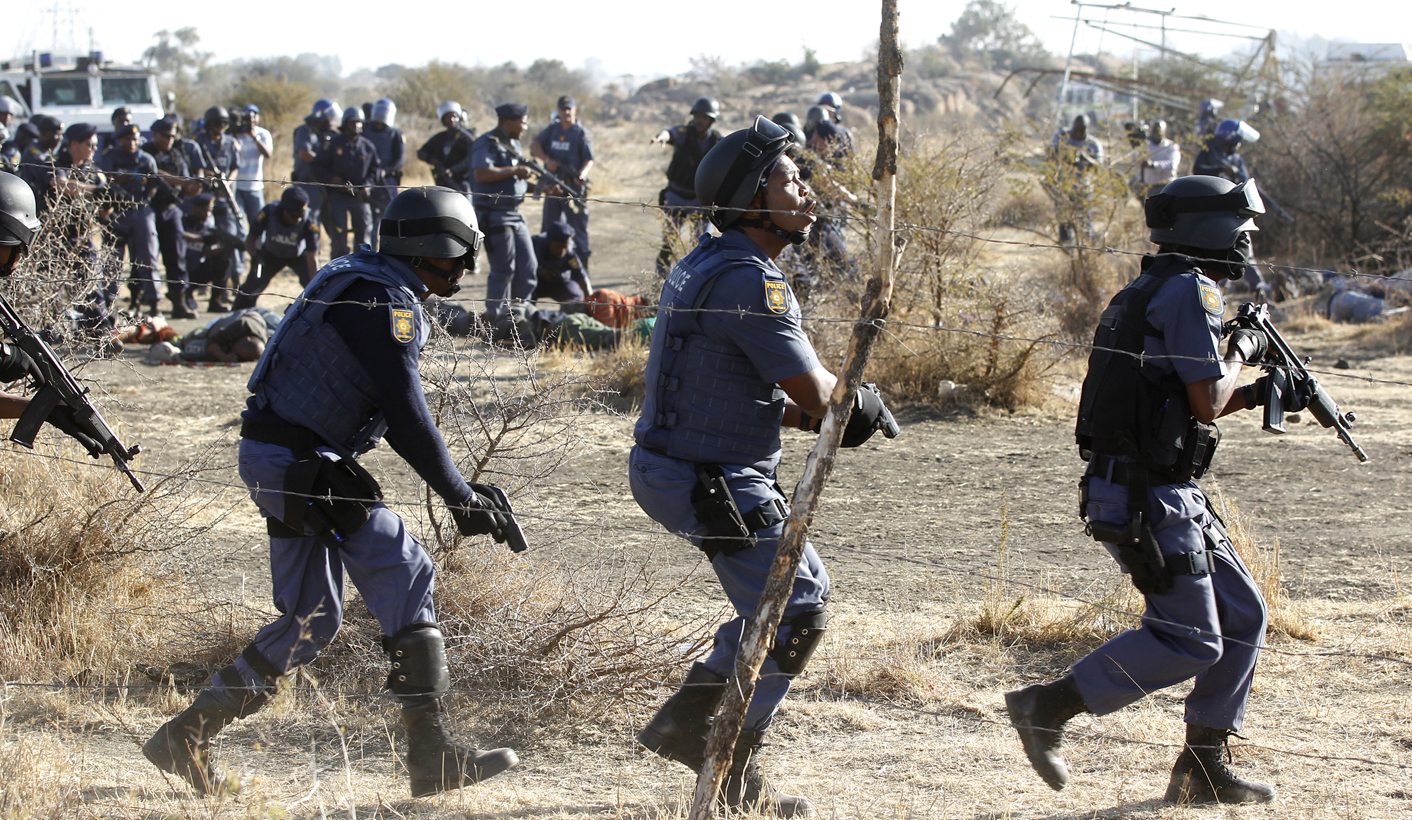 Fifty-five seconds after police in Marikana yelled “cease fire”, officers were still shooting live ammunition at koppie one. There is no evidence yet to justify the continued firing at the mineworkers. Meanwhile, at the Commission, Dali Mpofu’s team has just returned and Legal Aid South Africa is already challenging the decision to fund the legal costs of injured and arrested mineworkers. By GREG NICOLSON.

Evidence presented to the Marikana Commission of Inquiry last week revealed that police fired at least eight rounds of live ammunition in the 55 seconds after the first screams of “cease fire!”

The evidence was presented by the counsel for the South African Human Rights Commission who asked Katherine Scott, an England-based firearms expert, to analyse video footage of the shootings at the Marikana koppie, generally known as scene one.

The Commission saw the Reuters footage, edited to highlight the gunshots. “In summary, audible in the footage provided, following the initial call for ‘cease fire’, are at least eight apparent rifle discharges and seven other gunshots […] The eight discharges following the edit, starting at 00:00:42:16, come more than 20 seconds after the first audible call for ‘cease fire’, at 00:00:22.09, and include at least four rifle discharges,” said Scott’s affidavit.

She is an expert in examining crime scenes and video footage related to firearms and has done work for the UK Ministry of Defence, different UK police forces, and private clients. Scott worked with an audio and video enhancement specialist with 18 years of experience in forensics. Using the Reuters footage, he cut out background noises to create a “gunshot layer” for Scott to analyse.

The video runs for one minute and nine seconds. It begins in the moments before the main volley of fire from the Tactical Response Team, which lasts eight seconds. Then there’s an edit, meaning 35 seconds of what happened next was not in the footage. It then continues to show the moments after the shootings.

Then 35 seconds of real time is missing from the footage (in the video the edit is shown with a black background and the word “edit”). Following that are four more rifle shots, meaning 55 seconds after the first calls to cease fire, police still shot live ammunition. Four more shots follow, the first either a pistol or shotgun with rubber bullets, and the last three too difficult to distinguish.

Advocate Michelle le Roux for the SA Human Rights Commission put the evidence to Lieutenant Colonel Duncan Scott, who is being cross-examined. Scott gave the SAPS presentation at the beginning of the Commission and stated on the shooting at the first koppie, “The shooting lasts eight seconds until the cease fire is called by members who can see the threat no longer exists.”

Scott, who was not at the scene of the shootings, said it was his own analysis that led to that statement. “Critically what we are now able to see […] is that Ms Scott has identified at least four rifle shots that follow the edit, and because we know the edit is 35 seconds long, we know that these rifle shots come 55 seconds after the first call for cease fire,” said Le Roux.

She asked, “Colonel Scott, are you aware of any information of a threat existing after the eight-second volley that would justify the use of rifles?” Scott replied, “No, I’m not aware of any.” Despite not being at the scene of the shootings, Scott collected police evidence after the shootings and would have been involved in speaking to officers.

The cross-examination of Lieutenant Colonel Scott continued on Tuesday, but the news was dominated by Legal Aid South Africa’s decision to appeal the ruling that ordered it to pay the legal costs at the Commission of the injured and arrested mineworkers, represented by Advocate Dali Mpofu.

Legal Aid SA is challenging the South Gauteng High Court’s ruling on the grounds that funding the mineworkers’ legal team at the Commission will strain its budget and prevent it from doing its work. The decision came on Mpofu’s third attempt in court to win funding. During the process the Commission was distracted as legal teams withdrew in solidarity with the mineworkers.

Legal Aid SA will argue that the ruling creates a precedent forcing it to fund other commissions, which is currently not in its mandate, dictated by legislation. Legal Aid’s budget has already been cut and further funds from the state have not been provided to fund the Marikana Commission. “Funding the commissions will really put pressure on our budget and we won’t be able to afford in terms of providing legal aid to the indigent,” spokesperson Mpho Phasha told Talk 702 on Tuesday.

Legal Aid SA has been put in a corner over the issue. It argues it has no legislated mandate to provide for commissions (although it did fund the Socio-Economic Rights Institute team at the Marikana Inquiry), and money put towards a commission means others needing legal representation will miss out. “In future, funding should be provided for commissions by the executive authorities,” said Pasha.

The responsibility to provide funding rests primarily with President Jacob Zuma and Justice Minister Jeff Radebe, who have shown no willingness to discuss funding for Mpofu’s team, at a reported R340,000 a month. On Sunday Mpofu was in the news once again, announcing he is leaving the ANC to join the Economic Freedom Fighters. Legal Aid SA has said politics did not influenced their decision to lodge the appeal on Monday, which was the last day they had to challenge the High Court ruling.

Mpofu’s team will get funding during the process of appeal. Despite ongoing distractions the Commission is unveiling new information about what happened in Marikana last year. President Zuma last week extended the Commission’s deadline to 30 April 2014, requiring the final report six weeks after that. DM