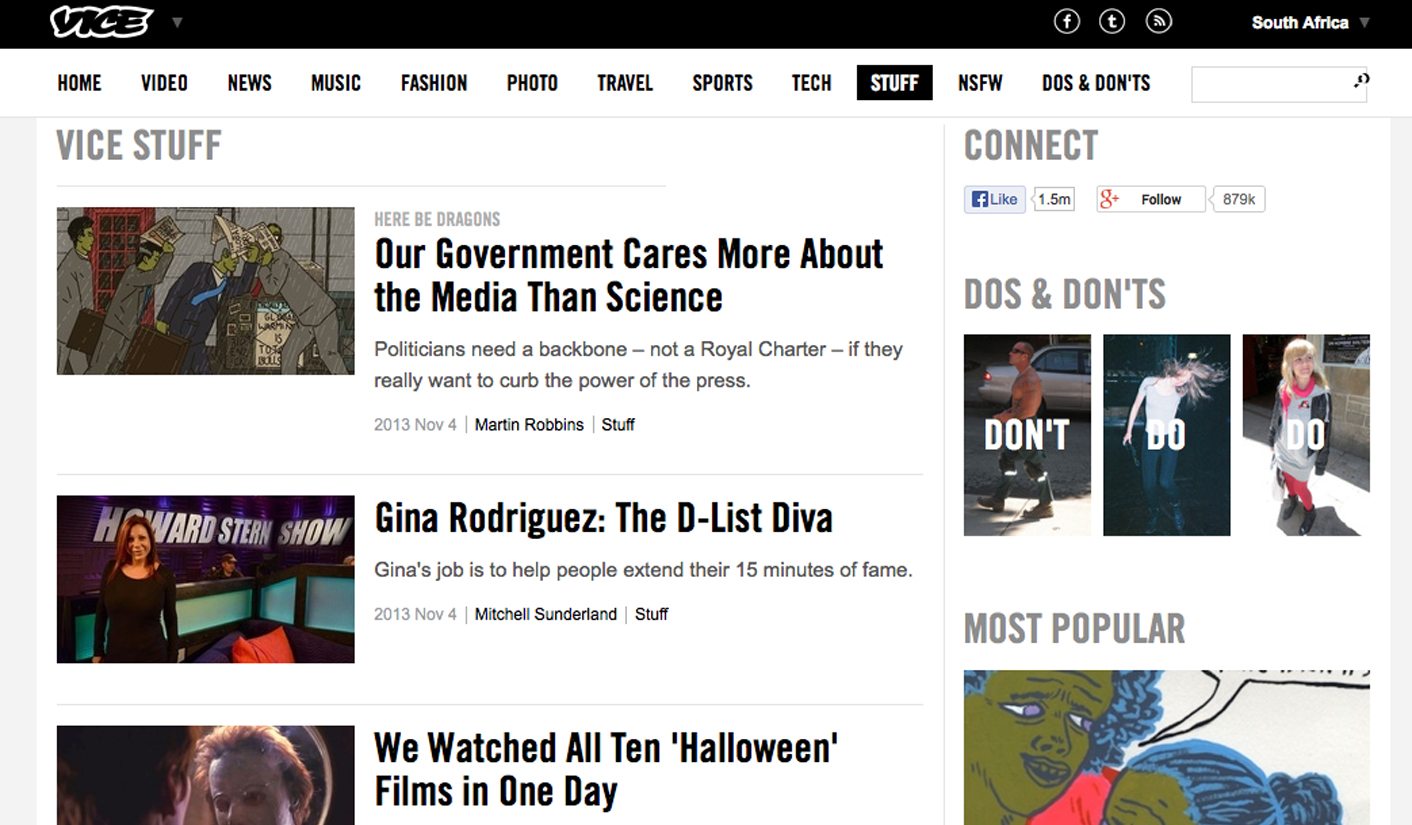 When basketball star Dennis Rodman and North Korean leader Kim Jong Un met in May, it had all the hallmarks of Vice Media: crazy stunts with a serious agenda, unguarded answers to naive questioning, reporter and viewer left thinking "Did that just happen?". By Paul Sandle.

Co-founder and chief executive Shane Smith, who reports from war zones as well as heading a group valued at more than $1.4 billion, said the idea for the match featuring three Harlem Globetrotter players came when he noticed Kim’s love of the game on a trip to North Korea.

“Dennis Rodman is an absurdist guy, North Korea is an absurdist place, so we make a documentary,” he said in Dublin last week. “We definitely didn’t know we’d be the first Americans to meet him.”

With its website, video channels and magazine, Vice Media champions a Gonzo-style, or what Smith calls “immersive” journalism, which puts the reporter into the story, an approach that Smith argues gleans the answers that young people seek.

Its reporters produce packages of stories, pictures and video with few taboos, like when one went on the run with software mogul John McAfee after he was named a “person of interest” in a murder inquiry.

The formula has won the Brooklyn-based company 15 million subscribers to vice.com a month, becoming the envy of traditional media groups that struggle to reach Vice’s core audience of 18-34 year olds, nearly two-thirds of whom are male. The demographic has proved hard for advertisers to reach because they watch little or no television.

Vice is also being closely watched by media executives because it seems to have cracked another challenge, namely how to make money from advertising linked to online video. It has an in-house advertising agency and has deals with companies such as chip-maker Intel and North Face to back projects.

Next, Vice wants to expand in India, both online and in television, helped by recent investor Rupert Murdoch who owns satellite channels there.

Murdoch’s 21 Century Fox paid $70 million for a 5 percent stake in August. He joins advertising executive Martin Sorrell, whose WPP was in a group of investors in 2011.

Smith said he needs a major media partner to realise his ambition of being the next ESPN, MTV and CNN rolled into one.

“CNN had to go to Time Warner, MTV went to Viacom and ESPN went to Disney,” he said. “Why? Because to be a global media brand takes a lot of money; connections with advertisers in all these countries is incredibly expensive.”

Vice was founded in 1994 as a magazine in Montreal, Canada, covering subjects such as sex, drugs, music, and conflicts from a self-aware viewpoint from outside the mainstream.

It has expanded into film, online video – its YouTube channel has more than 3.5 million subscribers, television -through a partnership with HBO, a record label and a bar in East London. Vice.com exists in 23 local versions from Russia to Brazil.

“We are doing stories on the margins, doing stories for our friends and our peers,” Smith said at the Web Summit in Dublin. “A lot of young people don’t know about this stuff. Unless you give context, a lot of the times it’s not interesting.”

Smith said Vice was already “throwing off a lot of profit”, but Murdoch’s cash would speed up its expansion, and it came with access to Murdoch’s Star satellite platform in Asia and his investments in the Sky broadcasters in Europe.

“We are launching about six new verticals (channel brands) next year,” he said, with a focus on more news content, travel, food, and an expansion of Motherboard, its global tech channel.

India, where he said young people had a voracious appetite for content and increasing access to smartphones, would be the test bed for many of the new offerings.

Smith, 43, said he was still excited about creating great content, and he had no intention of selling the company.

“The reason why we did the 21st Century deal was to keep control,” he said in an interview. “We were offered $1.5 billion to sell during that process. We had pretty much every media company after us, but we got the deal I wanted.”

Vice has grown its revenues, Smith mentioned a top line of about $500 million and a bottom line about half of that in the near future, by tying up with companies such as outdoor clothing brand North Face and Intel around its video content.

Critics have said Vice, which has its own advertising agency business, blurs the line between editorial and sponsorship. Smith refutes that.

“We don’t do branded content, we do content sponsored by brands,” he said. “We also build social media around that, and the same teams can work on that media, so the look and feel is the same, but editorially it has bearing on it.”

He said the Creators Project, which showcases artists using technology, was a good example. “Intel is our partner, but you’ll never see an Intel chip or a ‘bong bong bong’ in any of our stuff,” he said, referring to the Intel advertising jingle.

One problem with a contemporary subculture brand is keeping it fresh, but Smith, dressed in a dark blue shirt and with a trimmed beard, said he does not worry about being “cool”.

“They’ve been prophesying our doom since we started,” he said. “Hipsters, I don’t even know what they are, it’s people interested in music, and culture and food. For us, all we want to do is make great content. Cool by definition is small. I don’t know if Vice is cool anymore, Vice is interesting.” DM