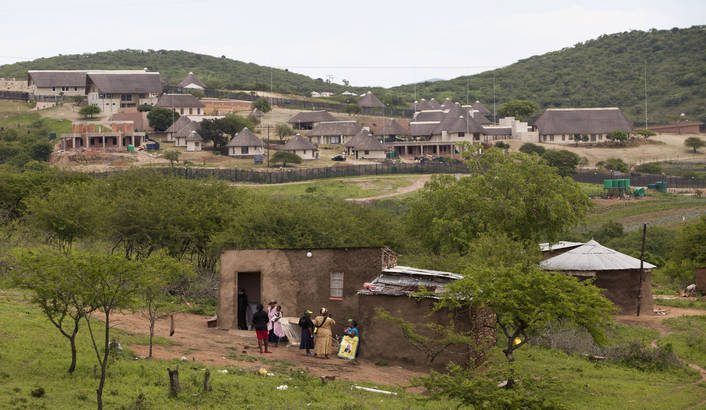 An ANC Cape Town city councillor has been fingered as the man behind the violent protest that shut down the city centre. Loyiso Nkohla is reported to have told meetings around the city that protestor would “not have to go hungry because there are so many places that you can loot in the CBD. The police can’t arrest us all because there will be too many of us”, the Daily Sun reported. Spokesman for premier Helen Zille, Zak Mabhele, told eNCA the march’s organiser had a clear case of incitement to violence to answer. He said the violence was part of an ANC campaign to make the Western Cape “ungovernable”.

The public protector should submit her report on Nkandla to parliament says the ANC’s chief whip, Stone Sizani. Advocate Thuli Madonsela earlier questioned why government had delayed changing the law dealing with whom she should hand reports to when an investigation involved the presidency. In a statement, Sizani said in this event, “Parliament should be the competent oversight authority to deal with such a report”. He said the president and the public protector were appointed by parliament, and accountable to parliament, in terms of the Constitution. The Nkandla investigation, which probed the spending of R206 million on Zuma’s private home, also looked at if his family improperly benefited from the upgrades.

GIVE IPID ‘SPACE AND TIME’ TO INVESTIGATE PHIYEGA ALLEGATIONS

The Independent Police Investigative Directorate (IPID) must be given “space and time” to conduct its investigation into allegations that police commissioner Riah Phiyega tried to defeat the ends of justice. Police minister Nathi Mthethwa appealed to the media, political leaders and commentators to wait until he’d received the investigators’ report and recommendations before calling for Phiyega’s suspension. Phiyega is accused of alerting Western Cape provincial commissioner, Lieutenant General Arno Lamoer, to an enquiry of alleged corruption against him by the Hawks.

A video showing an attack on a KwaZulu-Natal schoolboy, who later died of his injuries, was posted to YouTube where it had 300 hits in two hours before being removed. Bongani Nkabinde was assaulted with a knobkerrie and stabbed by fellow pupils during assembly at the Isizimele High School in Dannhauser. Police spokesman Captain Thulani Zwane said five pupils were arrested and charged with murder while a sixth was charged with possession of a dangerous weapon. The Daily Sun reported the attack was the result of tensions between rival traditional music groups from different clans.

ANC members of the provincial legislature of the Western Cape aligned with former chairman Mcebisi Skwatsha are expected to lose their posts after this weekend’s list conference. The Argus reported party insiders as saying several ANC MPLs and MPs were not positioned high enough on the lists to ensure that they will be back in parliament and the provincial legislature after next year’s elections. Delegates for 126 branches attended the conference, held in Langa. The report said a certain faction planned to disrupt the meeting by not voting for those on a “unity list” but ended up being scrapped from the list themselves.

ZUMA HID IN BATHROOM AFTER SPEEDING THROUGH ROAD BLOCK

The man who nearly became Gauteng’s police commissioner, Major General Bethuel Mondli Zuma, hid in a bathroom to avoid being breathalysed on the night he was arrested, the Pietermaritzburg magistrate’s court has heard. Road traffic supervisor Zain Mahomed said at Zuma’s trial that officers wanted Zuma tested for alcohol at the road traffic inspectorate building but found him at a house where he emerged from the bathroom after a long time. Zuma has pleaded not guilty to charges of failing to stop when ordered to, drunk driving, attempting to escape from custody and defeating the ends of justice.

MJONGILE ORDERED TO PAY BACK KEBBLE ESTATE – WITH INTEREST

ANC provincial secretary in the Western Cape, Songezo Mjongile, has been ordered to repay over R350,000, which includes interest on the original amount, he received from the late mining magnate, Brett Kebble. The Times reported the money paid to Mjongile by the Kebble Buitendag Investment Trust was a donation and that the Kebble estate could claim it back. But Mjongile claimed he and Kebble were business partners and that the money was for work done; he said they “created value” for Kebble and they were “business people, not some NGO” and that they were BEE partners involved in mineral rights.  Acting Judge AJ Savage said the “dispositions were not made for value and were made in circumstances in which Kebble and KBIT were insolvent”. Mjongile tried to counter claim R4.6 million in salaries and commission, which the judge dismissed.

The real kidnapper in the case behind the shooting of hip-hop star Khuli Chana has appeared in the Germiston Regional Court, Sapa reported. Enoch Motsepe, a detective from Silverton, Pretoria, appeared on charges of kidnapping and extortion. The state said four men, claiming to be police officers, entered the victim’s home and took jewellery, a BMW and a cellphone, and kidnapped the man, demanding a R100,000 ransom. Chana was shot and wounded at the Midrand petrol station where they were due to collect the ransom money, as a result of driving a similar car to that of the kidnappers. Motsepe was later arrested. DM