Chronicles of Chic: After (SA) fashion week, a real wor... 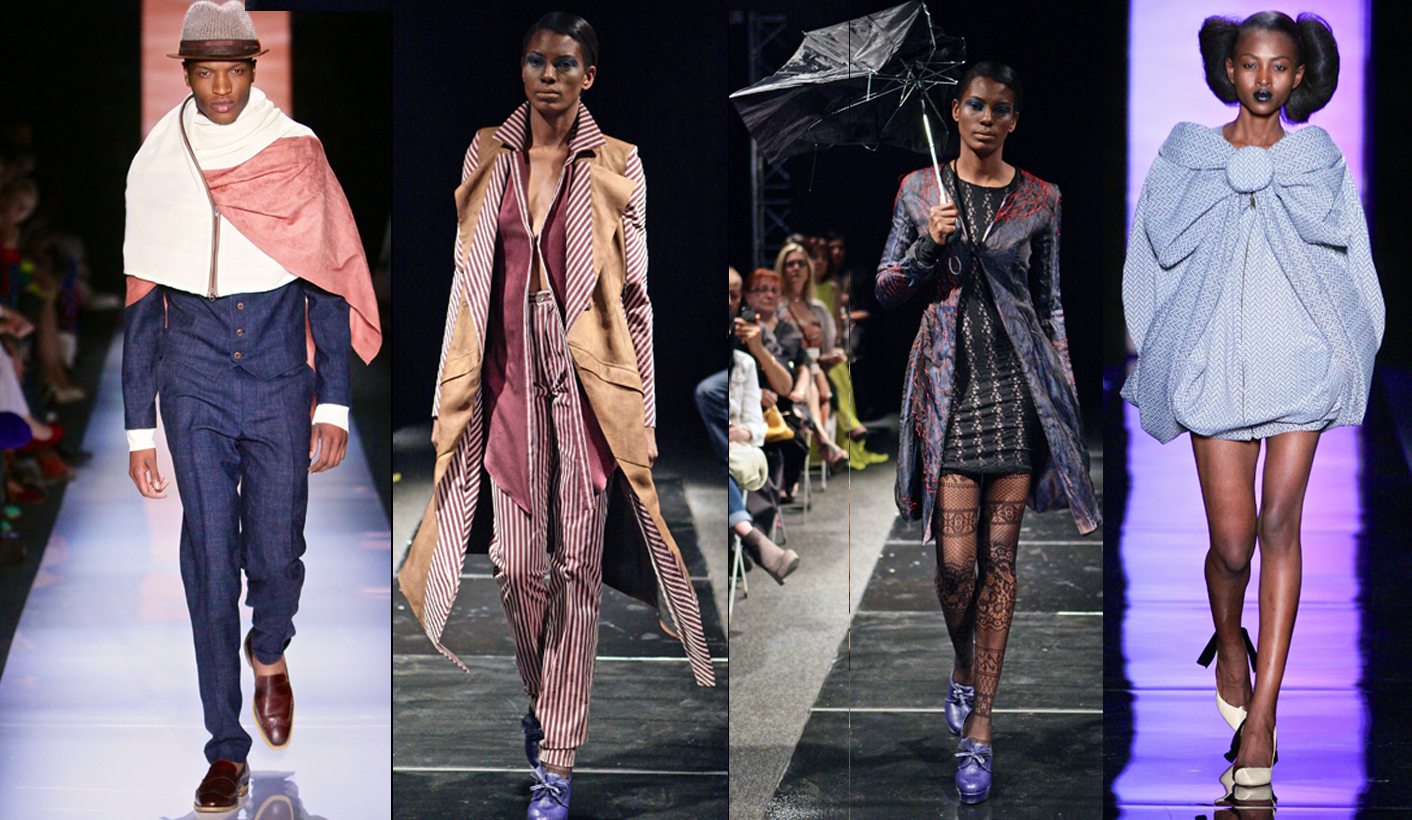 Let go of the hype and the circus atmosphere, and fashion week is, in fact, a trade show: designers not only create collections for the love of fashion but also with the hope of attracting potential buyers. Ranges that are commercial enough will find their way into the alleys of local retailers while others will fall into sartorial memorabilia. EMILIE GAMBADE explores life after fashion week.

Fashion weeks are, officially, events of fascination and elegance, notorious for setting the trends of the season to come. Whether you are a journalist, a designer or just an ‘instagrammable’ somebody, fashion weeks are platforms, to see and to be seen, by not only the media, who will or won’t speak about one’s work, (in 2012, Hedi Slimane for Yves Saint Laurent refused to invite the New York Times fashion reporter, Cathy Horyn at his show after he “objected bitterly to a review [she] wrote in 2004.”) but also by potential buyers.

In South Africa, where retailers are few and the survival of fashion designers constantly challenged, presenting collections that will charm customers, boutiques and department stores is even more significant. Local fashion weeks’ organizers extend the shows to more exclusive professional platforms, where designers can present their collections to retailers: SAFW created the ‘Buyers Lounge’ – 53 buyers attended the event this October – and ‘the Fashion Agent’ to help designers meet and potentially sell to local and continental buyers. AFI formed, on the same principle, ‘the Africa Fashion Trade Expo (AFTE).’ These are two platforms allowing designers not only to display their collections and market their ranges but also to interact directly with potential clients.

This season, at SAFW, it looked like the penny had dropped, that designs were closer to the “world-class standards” the South African fashion industry so desires: ranges were not only exciting but also potentially saleable, the collections presented were edited and consistent and designers, for the vast majority, were prepared and ready.

The shows, held mostly under a wide marquee, were split between installations and catwalk displays. While the latter brought the glam factor to paroxysm level with the usual front row running along the runway, installations were arranged in a smaller spaces, with an air of intimacy that reminded of the Haute Couture private showrooms, à la Chanel or Saint Laurent, where only selected VIP clients can have a preview of the collections.

The stories told, if not all original, were coherent and inspiring, and you couldn’t help but being proud of what was emerging, a je-ne-sais-quoi more precise and convincing.

Take Suzaan Heyns, for example, who drew a collection based on the character of Minnie Mouse, a risky take even in the daring world of fashion.

Heyns explained, “Drawing out the shapes at the core of Minnie’s DNA – her ears, eyes, bows, gloves and signature polka dots – and slightly re-arranging them became the springboard for this collection, with influences as far apart as science and art finding their way into the clothes.” The result was a compelling collection where Minnie Mouse’s cartoonish charisma impeccably translated into jewel-like clusters made out of plastic dolls eyes, an inflated jacket reminiscent of Comme des Garçons by Rei Kawakubo and multi-coloured, cut-out dresses with exaggerated flat epaulettes. Heyns’ collection carried a beautiful strangeness that didn’t fail to be modern.

Would it sell? Of course: the collection can easily be deconstructed, single pieces like the black flounced jacket – almost a cape – that can be worn over a pair of jeans, and voilà! Heyns knows it and builds ranges that appeal to a wide – and loyal – clientele. The designer skipped the SAFW Buyers Lounge because, “Over the past few years we have found that a more direct and personal approach in terms of buyers is better suited to our brand.”

Clive Rundle’s peculiar world is one of unresolved issues and delicate rebellions. Rundle is a master in crafting a world that seems inhabited by loud thinkers (his soundtracks serve as musical metaphors), voices that voluntarily disrupt the flow where style is everything but stillness and hollowness is present. For A/W 2014, he played with layers: models were dressed as if they couldn’t bother to decide what to wear and opted for random piling of clothes. But if one looked closer, there was a defined structure in the layering, a detail here in the back of a trench, there on a shirt, lifting slightly like a secret pocket. There is something extremely tactile in Rundle’s show: a desire to crawl under the strata, lift the pieces of fabric, explore the many pleats to find what’s hiding underneath. “The shit got to go,” sung the voice in the soundtrack, “The shit got to go,” an invisible storm passing over our heads, swiping the world from unnecessary frills and broken umbrellas.

Produced in Antwerp, Belgium, under the mentorship of Anne Chapelle and her company BVBA32, (Chapelle, a private investor, supports Belgian designers like Ann Demeulemeester and Haider Ackermann) Rundle presented his whole collection at the SAFW Buyers Lounge. He hoped it would attract boutiques from all over the country and strengthen his already strong local presence, but orders are yet to be confirmed; the Buyers Lounge only closes on November 15.

Also quite marketable was Craig Jacobs for Fundudzi’s A/W 2014 collection, “Metamorphosis”, inspired by “the African blue wing butterfly.” Strictly talking design, Jacobs latest range was disappointing: the metaphor with the different stages of a butterfly growth was plain obvious and would have benefited from a more refined, subtle approach. In addition, some of the models wore bright pink high heels (why such unfortunate choice?) and barely managed to walk on the gravelled path – the show was off-site at 44 Stanley. Still some pieces were interesting, mainly the knitted garments – the designer worked with Mohair SA – and a black and eco ‘leather’ cocoon-coat (although I doubt it will be flattering for the silhouette).

But one has to praise Fundudzi for being a ‘socially and environmentally responsible company’; the tagline is appealing and surfs on the hype of eco-conscious couture. Jacobs explains that he considers himself a ‘retail designer’ and that 80% of his collection is or should be commercial. “A number of independent boutiques from across the country have already placed orders. [This is] a big surprise, as the buyers usually take a while to make a decision; I think the tide is slowly changing in terms of buying culture and perhaps my collection also spoke to them.” The designer also has an agent in Italy who represents him in Europe and Russia; his A/W 2014 collection will be presented directly to those markets during the European winter buying season, which start in March.

Collections also sell when they are unique and made locally. Naked Ape A/W 2014 by Shaldon Kopman was exactly that: his hand-woven bamboo suiting and bamboo knits came from Swaziland, the Mohair knits were sourced in the Eastern Cape, the shoes manufactured in Pietermaritzburg, the hats by South African milliner Cloche, and the bags created by Bothwell Ndlovu. If anything, Kopman is marking his territory by creating a menswear line that is strong and extremely dandyish. Kopman notes : “Menswear buyers are few; as much as we are ready for production, our prices are considered high for the local market. The aim is to have our own store and spread from there.”

Isabelle Lotter for Sies!isabelle presented her entire collection at the Buyers Lounge, plus some pieces that were more ready to wear; in total, about 40 pieces made of silk, boiled wool, Alpaca knits, cotton velvet or viscose knits. She says: “Boutique owners from across the country showed interest in my collection. As I already supply quiet a selection of boutiques I am careful not to overlap existing shops with new clients. I’ve found my clothing retails better at boutiques where I would personally shop, so I’ve become more selective about whom I would like to supply. I have previously spoken to buyers from LA, Belgium and London, without results so far. But I’ll keep trying!”

Local fashion weeks have gained in stature and quality and collections -especially as shown at SAFW – have been edited into more salient and appealing ranges; yet, selling to retailers or department stores is not effortless. For one thing, South African retailers are not Bloomingdale’s or Barney’s and do not specifically focus on high-end ranges; for another, local designers still need to pass the fashion week test and prove that they can supply retailers should large orders be placed.

Explains Booyzen: “[International buyers] will not buy if we cannot get our supply chain sorted out. This includes fabrication, manufacturing and quality control.”

Turning a fashion show into a marketable range is South African fashion next step; and one that will definitely contribute to the strengthening of the whole industry. DM