Bekkersdal protests: ‘dirty votes’ and the ANC in the eye of the storm 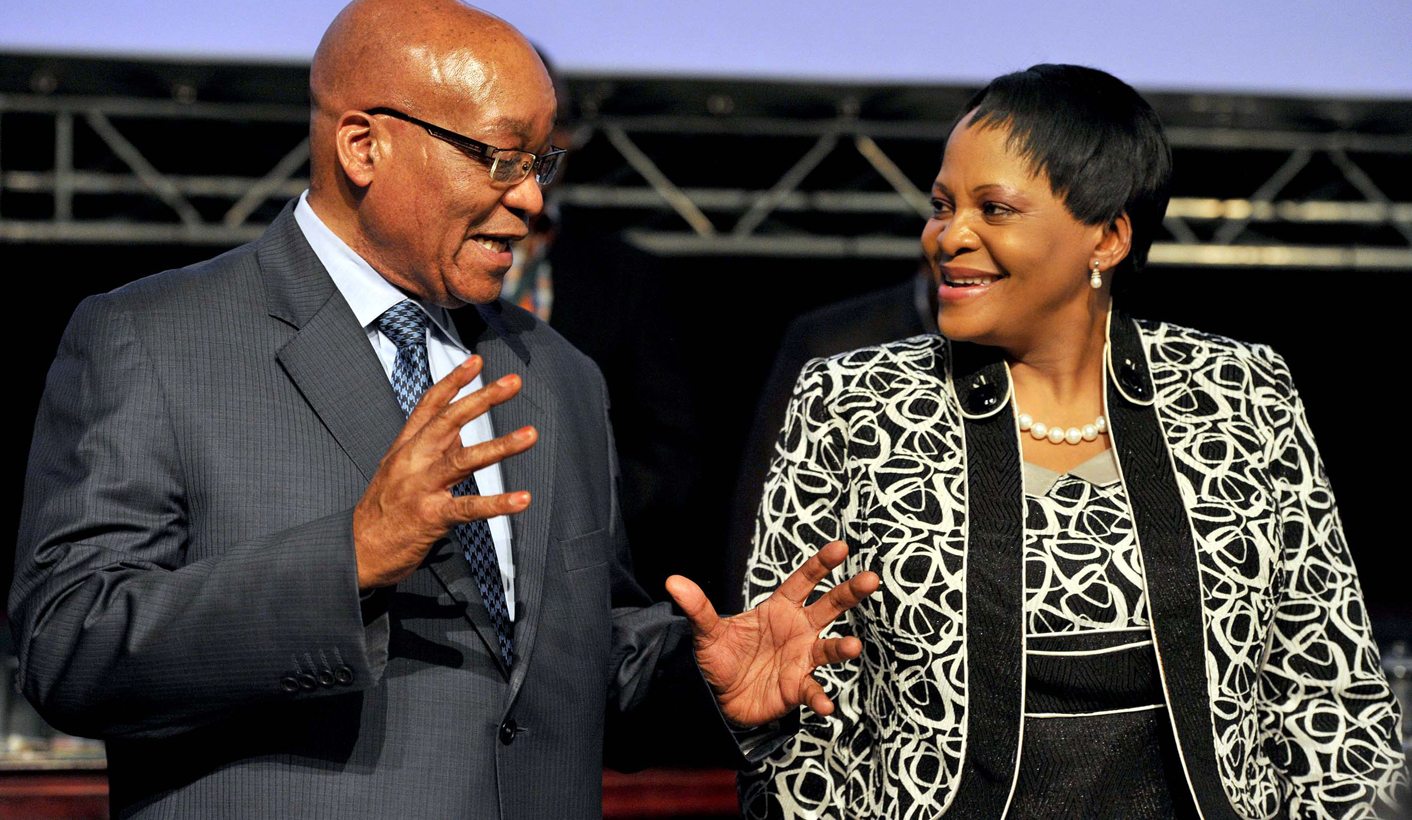 Protestors finally relented on Tuesday and Bekkersdal, which has seen ruinous protests in the last week, was quiet, with only police patrolling the township. The political intervention kicked into high gear, as Gauteng leaders sought to quell the unrest (elections are coming!). But what lingers now is the stench of Premier Nomvula Mokonyane’s “dirty votes” remark. Like so many things in SA, the ruling party’s own politics has come into play. By THAPELO LEKGOWA & GREG NICOLSON.

Firstly, the premier should be congratulated on eventually (better late than never) visiting Bekkersdal. The provincial government would usually deploy an MEC to a violent protest. He or she listens, accepts a memorandum, and makes vague promises to think about addressing community concerns, which are usually long-lasting and relate to broken promises and maladministration or a sheer disregard of citizens by local government.

On Friday, Nomvula Mokonyane, accompanied MEC of Community Safety, Faith Mazibuko, and told an audience she wouldn’t tolerate violence. The premier visited Bekkersdal 10 days after a trip to Diepsloot to comfort the parents of two toddlers who were brutally murdered. But Bekkersdal wasn’t in the mood to trifle and the community’s obstinacy drew a severe rebuke from the Gauteng leader. “People can threaten us and say they won’t vote but the ANC doesn’t need their dirty votes,” she reportedly told them before attempting an apology.

It particularly touched the Bekkersdal community. They want the local municipality’s leadership removed for failing to provide jobs, services, and for alleged cases of corruption. Mokonyane backed Westonaria Mayor, Nonkoliso Tundz, who had herself allegedly insulted residents, calling them “inkwenkwe”, a term for those who haven’t been to initiation school and are seen as boys.

Thabang Wesi, Bekkersdal Concerned Residents Association spokesperson, said on Tuesday, “If the ANC does not need our dirty votes anymore, it is fine. We will take them to other political parties that will wash them and once they are clean utilise them effectively, taking care of the voters, unlike the ANC.”

Malethloa Mogole, a young female resident of Bekkersdal who studies media, said, “The ANC is there because of the people and if it is saying things like this to the people it will not win next year’s elections. I will be voting for the EFF [Economic Freedom Fighters] because it is dirty to the ANC.”

If protesting makes votes dirty, the most soiled ballots must come from Marikana in the North West. Residents in the mining community were also outraged by Mokonyane’s comments. “It is only a fool that will vote for the ANC now. After everything they have done to us as South Africans, our vote needs to move to a better party. Our dirty, smelly votes won’t be benefiting the ANC this time,” said Primrose Sonti, a resident of Marikana and member of its women’s movement.

Nandipaha Nazo, another resident, told Daily Maverick, “We are dirty, they are dirty [Inkunkuma aye dibane]. [ANC] is dirty itself. We will vote for the child of the ANC, EFF, as they supported us when we were in pain here in Marikana. When they lose they [will] realise how useful the dirty vote is.”

The Democratic Alliance (DA) has had a field day, linking Mokonyane’s comments to other grievances in Gauteng and describing a government that doesn’t care about citizens’ concerns. The party’s national spokesperson and candidate for Gauteng premier, Mmusi Maimane, said Mokonyane must apologise and retract the comments:

“When residents take to the streets they are told their votes are dirty. When we say we don’t want e-tolls we are told to buy an e-tag and pay up. And when we talk about the need for more jobs in Gauteng the silence from government is deafening.”

DA Gauteng caucus leader, Jack Bloom, called on Mokonyane to explain her handling of the protests to the legislature, claiming she ignored residents’ concerns and insulted them.

In a great piece of sarcasm on Monday in Business Day, political analyst Aubrey Matshiqi began, “There is nothing that politicians from the ruling African National Congress (ANC) find more irritating than citizens who refuse to be (mis)ruled. But there is nothing that unhinges our politicians more than citizens who labour under the illusion that it is their democratic right to complain, rightly or wrongly, about the performance of their government.”

Representing a local, provincial and national government effort, the premier provided an update on Bekkersdal on Tuesday. A task team comprising all spheres of government has been established to address the issues. Mokonyane said matters of fraud and corruption are being investigated and the task team will help improve the municipality’s financial management system and fill vacant posts. The merger between Westonaria and Randfontein would go ahead and in the meantime the issuing of tenders should be suspended.

In Bekkersdal on Tuesday police were still on the streets but a community meeting decided to suspend the protest while government tries to address concerns. The protests have caused an estimated R11.2 million damage, reported Beeld. The community hall, gymnasium, municipal offices, city centre and mobile library were all damaged, said Westonaria municipality spokesman Kgabane Madiehe, who listed the costs. When Daily Maverick visited the Peter Nel community hall and gymnasium last week, residents were vandalising the buildings.

“We are confident that the inter-government task team composed of national, provincial and local spheres of government will soon announce a comprehensive plan to deal with the service delivery and other concerns of the community of Bekkersdal,” said ANC Gauteng spokesperson, Dumisa Ntuli. “As agreed with the Concerned Residents Association that violent conduct and destruction of property will never be the solution to the genuine concern of the community,” Ntuli added.

The ceasefire came after multiple attempts at political intervention from the provincial government. The Gauteng ANC’s two centres of power were clearly on display. Residents protested when Premier Mokonyane was at a church on Sunday. The ANC’s provincial chairman, Paul Mashatile, was also in the area and he was able to negotiate the suspension of the protest. According to Power FM, Mashatile was genuinely surprised to hear the premier was in the area at the same time on Sunday.

Mokonyane is under pressure in the province. According to reports, Gauteng members favour their chairman Mashatile rather than the premier, who was chosen by President Jacob Zuma and is a key supporter of his leadership.

She has indicated that she will run again for premier, but as the province decides on its candidates for 2014, Mokonyane faces an uphill battle. That battle is one of many. The DA’s campaign bus (yes, Maimane has a bus) is continually campaigning for votes and the EFF is causing yet another headache for the ANC.

It’s likely that it was the elections that brought Mokonyane to Bekkersdal and it was election pressure, along with the “ungrateful” residents, that led her to her “dirty votes” comment. The slur won’t help the ANC but it’s important to bear in mind that Mashatile was able to negotiate a temporary halt to the violence. The big loser will be Mokonyane. But does she care? She doesn’t need dirty votes; she has Zuma on her side. DM