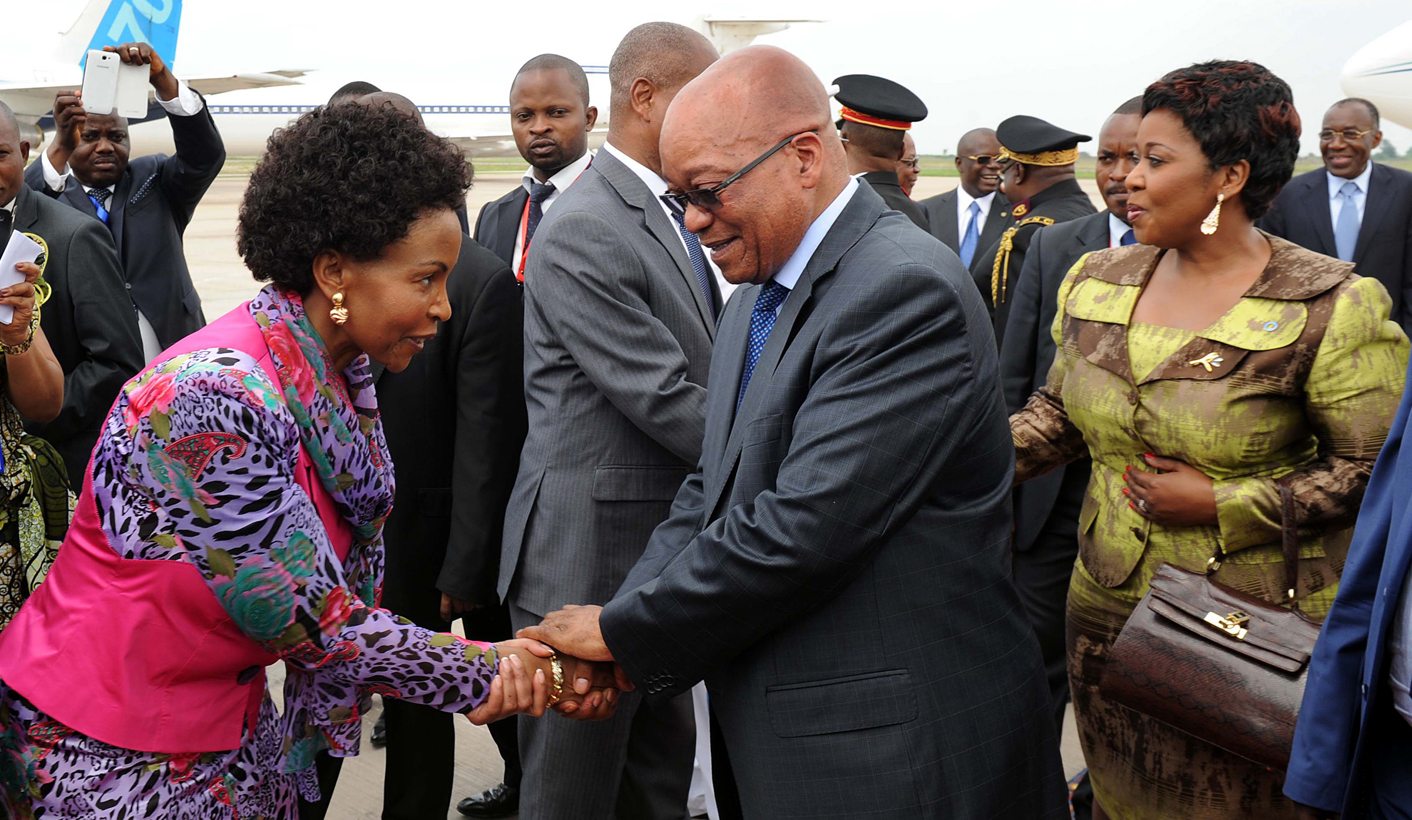 Sometimes, diplomacy is all about timing. This week, a fortunate Jacob Zuma got his timing exactly right, turning up in Kinshasa just as South African troops helped the Congolese army to a major victory over rebels in the east. With his own position buoyed by the good news, Zuma’s counterpart Joseph Kabila might just be in a gracious mood when it comes to negotiating those all-important energy contracts. By SIMON ALLISON.

President Jacob Zuma could not have rocked up in Kinshasa at a better time. Not only is his opposite number, Joseph Kabila, enjoying a rare military victory over rebels in the restive east of his country, but South African soldiers helped deliver it. This is a happy coincidence – Zuma’s trip was planned long in advance – but it should help Zuma tick off the items on his Congolese shopping list, which is part of the reason why our soldiers are there in the first place.

The good news came from the town of Rutshuru, a major stronghold of the M23 rebel group which has, under various guises, been causing havoc in the eastern Democratic Republic of Congo for many years. After a few days of fighting, the town was over-run by Kabila’s army on Sunday, along with other important M23 positions. Supporting the army was the United Nations Force Intervention Brigade (FIB), an experimental peacekeeping unit with a highly unorthodox mandate allowing it to take offensive measures. The 3,069-soldier strong brigade is composed of troops from Malawi, Tanzania and South Africa (there are 1,345 South African soldiers).

Between them, the Congolese army and the FIB dealt the rebels a major, potentially even fatal, blow. “We can say today that the M23 is finished, militarily,” crowed Gerard Araud, the French ambassador to the United Nations, in a Security Council meeting on Monday.

While Araud and his fellow diplomats may have a point, it’s worth remembering that a military victory is not necessarily a political victory – especially when the underlying causes of the conflict (particularly the role of Rwanda as the rebels behind-the-scenes puppet master) remain unaddressed, and peace talks in Kampala have pretty much broken down.

“Certainly the M23’s military setbacks these last few days have been very significant,” said Stephanie Wolters, DRC analyst at the Institute for Security Studies and long-time observer of the country, in comments to the Daily Maverick. “From a strategic point of view, it is hard to see why they would have allowed this to happen if they did in fact have the military strength to prevent it: it puts them on the back-foot at the talks in Kampala, and generally makes them look weak. Being declared ‘dead’ by the UN is not a good PR move. That said, the M23 is only going to be ‘dead’ if Rwanda chooses to permanently end its support to the movement and not to revive it at a later stage. This is the big question mark. Given what we have seen in the past, and Rwanda’s increasingly belligerent stance against DRC, this is unlikely.”

Although it’s clearly premature to talk of an end to the conflict, President Kabila will doubtless be enjoying the good news from a part of his country that has only caused him trouble in the past – and he’ll know that he owes South Africa a debt of gratitude for its loyal military support in the area (South African troops have been in the DRC, in various different international roles, since 1999).

In the world of international diplomacy, there’s an easy way to pay off debts of gratitude: contracts. Just like American companies hovered up oil contracts in the wake of the second Iraq War, and European companies profited from Europe’s involvement in the Libyan Revolution, so South Africa is eyeing up a few potential opportunities in the DRC.

There’s oil, of course. At the last bilateral meeting between Kabila and Zuma – just last year in Pretoria – a deal was signed between the two state-run oil companies, PetroSA and Cohydro, that gives PetroSA a foot in the door to the DRC’s potentially lucrative oil reserves (which are currently untapped and unproven). But the ‘cooperation’ arrangement was little more than a statement of intent, and Energy Minister Ben Martins, who accompanies Zuma on the trip, will doubtless be hoping to pin down a few more details.

This, however, is small change compared to the really big contract in the offing: the one to finance and build the Grand Inga Dam (also known as Inga 3) which, if and when completed, will be the biggest hydroelectric project in the world, with the capacity to supply most of southern Africa’s energy needs. South Africa’s not offering to actually build or finance anything, at least not all of it – we don’t have $12 billion lying around, and we certainly don’t have the expertise to get it up and running, if Medupi is anything to go by – but our involvement is crucial, both as the primary recipient of the energy generated and as a kind of project guarantor to investors wary of doing business in the DRC.

In return, South Africa gets lots and lots of really cheap electricity, perhaps enough to dig Eskom out of its load-shedding hole. Estimates suggest South Africa will take 2,500MW of the Grand Inga’s initial 4,800MW capacity at a cost of just $0.02/kWh. This will be a major boost to our creaking energy infrastructure.

“Inga 3 is the big factor driving SA interest in the DRC at present,” said Wolters. “But making clear progress on this has been frustrating for South Africa, as the Congolese government has played hard to get in the past. There is agreement in principle between the two, but that had also happened with the ill-fated Westcor power project to develop Inga 3, in which SA was a key player along with other countries in the Southern African region. That was finally abandoned in 2009. It is looking much better for SA this time around.”

With lots of details of the Grand Inga deal not yet finalised, and construction only set to begin in two years’ time (and that’s in the best-case scenario), there is plenty at stake in Kinshasa as Zuma and his team try to pin Kabila’s administration down. Thanks to the efforts of South Africa’s troops, they’ll be in an excellent bargaining position. DM

Photo: President Jacob Zuma and his wife Bongi are welcomed by Minister of International Relations and Cooperation Maite Nkoana-Mashabane on arrival in Kinshasa in the Democratic Republic of Congo on Tuesday, 29 October 2013. Zuma arrived in Kinshasa for a two-day State visit. Picture: GCIS/SAPA