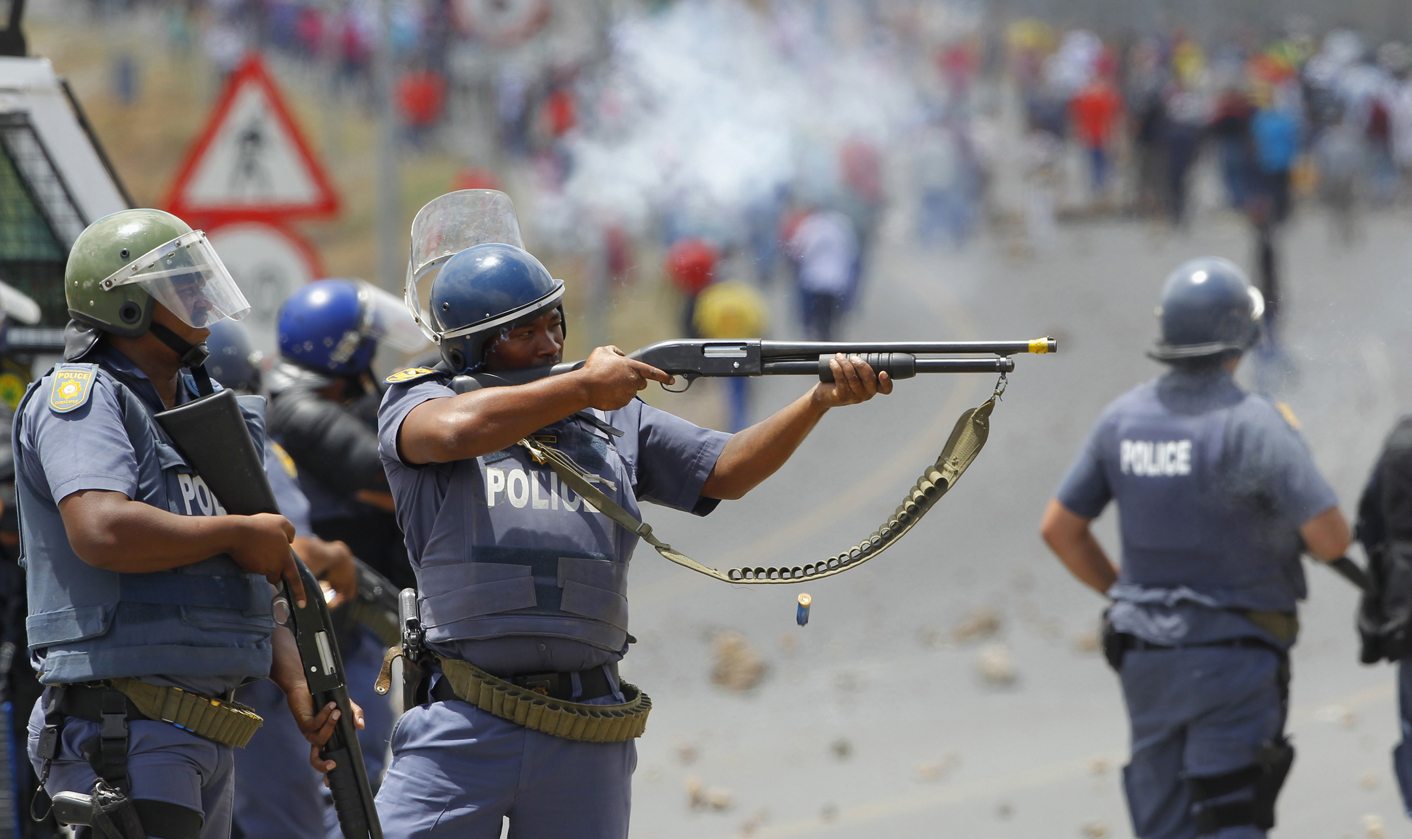 This week marks the one year anniversary of the strikes by Western Cape farmworkers which left three workers dead, saw R160 million claimed for in insurance, and resulted in a 52% increase in the minimum wage for the sector. There are commemorations planned in De Doorns and elsewhere, but there’s also the potential for tension between farmers and farmworker unions who say that working conditions are still less than ideal. By REBECCA DAVIS.

What BAWUSA (the Bawsi Agricultural Union of South Africa) is calling the “Farmworker Revolt” began almost exactly a year ago in the fruit farming communities of the Western Cape. Farmworkers wanted to see the sectoral minimum wage brought up from its paltry R69 a day to R150. They didn’t end up with R150, but from March, when Labour Minister, Mildred Oliphant, posted the new sectoral wage determination, a day’s work as a farm labourer is not supposed to earn you less than R105 a day.

When the 52% increase was announced, there was much dramatic talk of the inevitable job losses that would follow, as farmers would not be able to afford the additional wage burden. In reality, this hasn’t happened. Business Day reported in August that the quarterly labour force survey showed that agricultural employment only dropped by 3.5% between March and August despite the addition of R2 billion to the wage bill. Agricultural economist, Nick Vink, was quoted as saying that despite the hype around the minimum wage increases, “there does not seem to have been a lot of concern about the R105. I think everyone agreed that R69 was too low.”

But that’s not to say that everything’s peachy now. BAWUSA and its controversial leader, Nosey Pieterse, claimed in a recent press release that farmers were exacting revenge for the pay hike through measures which include increasing the rent paid by farmworkers, and increasing the tariffs paid by farmworkers for electricity. “We note with concern that female workers, especially seasonal workers, bears [sic] the brunt of this retaliation of farmers,” BAWUSA stated. (The union did not respond to the Daily Maverick’s request for specifics on these allegations.)

In March, participants in a protest outside Parliament in Cape Town made various separate claims about the ongoing struggles of farmworkers. A memorandum delivered by the ‘Farm Worker Coalition’ alleged that workers were being tricked or forced to sign forms indicating that they would be happy to receive less than R105 per day. It was also claimed that some farmers would only employ coloured workers, and not black workers, after the strikes.

Farmers, unsurprisingly, deny these charges. “Labour relations are actually fine,” one told the Daily Maverick, speaking on condition of anonymity.

But there’s no denying that some tensions have persisted beyond the official ending of the farmworkers’ strikes in January this year. The complicated saga of Flippie Engelbrecht, the teenage son of a Robertson farmworker allegedly beaten so badly by a farmer that he ended up losing both his hands, appeared to shed an ugly light on the ongoing mistreatment of workers by farmers – and indeed it still may. But when the farmer in question, Rietvallei’s Johnny Burger, committed suicide in September, questions began to be asked about the medical timeline of the story, and about the woman behind it, Carina Papenfus.

Papenfus and her ‘Freedom Trust’ have gone on to produce a number of other farmworkers who have allegedly also been victims of farmer brutality. Papenfus has repeatedly shown herself to be willing to adjust facts to support her cause, however. For instance, the Freedom Trust has been carrying out lobbying around the killing of a Worcester farmworker, Ricardo Zempie, who was shot in the head from behind, allegedly by the farmer in whose employ Zempie was.

The Freedom Trust has sought to present the murder as if it was connected to the sector labour unrest. In an August press release the Trust explained it as follows: “During the farm strikes, Ricardo Zempie, a farmworker, was shot in the back and killed by the farmer in whose employ he was.” But newspaper reports suggest that Zempie was killed almost nine months before the farm strikes began, in February 2012, allegedly while attempting to steal cables.

This is, of course, irrelevant to the central point of the story: it is undeniably shocking that it appears nobody has yet been charged with Zempie’s murder. Although farmer Johan van der Merwe was taken into custody the day after the shooting, he was apparently released almost immediately. An investigation to see whether he should be criminally charged is still ongoing.

There also appears to have been silence from the police on the matter of the investigation of three farmworkers killed during the last year’s strikes – Michael Daniels, Letsekang Tokhwane and Bongile Ndleni – even though IPID (Independent Police Investigative Directorate) spokesman Moses Dlamini told the Daily Maverick that the body has a maximum of 90 days to complete their inquiries. When we asked Dlamini in August what progress had been made in investigating the death of Michael Daniels, he replied that one policeman would be charged, and that the matter had been postponed till the end of September for a regional court date.

BAWUSA says that it has planned memorial services for the three men who died during the strikes, to take place over the weekend of November 2 and 3. In addition to the memorials, the union will lead “celebrations” in “De Doorns and in all other areas that participated in the strike”.

De Doorns, the impoverished epicentre of the strike, shows signs of becoming something of a Western Cape political football in the run-up to the 2014 elections. In October, Minister of Social Development, Bathabile Dlamini, and Trade and Industry Minister, Rob Davies, visited De Doorns and delivered food parcels. The ANC denied charges that this amounted to vote-buying, saying that it was simply part of the government’s outreach programme to poor communities.

Also in October, Labour Minister, Mildred Oliphant, visited another area hard-hit by the strikes – Citrusdal – to address farmworkers at the Cederberg Academy and remind them to whom they owed the increased minimum wage. “If it weren’t for the ANC there would be no sectoral determination,” Oliphant reportedly said. “That is why the ANC does not govern the Western Cape, because some of you have decided not to vote.”

DA leader Helen Zille, meanwhile, has continued to suggest that the farm strikes were fomented by the ANC to destabilise the Western Cape. “Why… did Agriculture Minister Tina Joemat-Pettersson’s department transfer R2-million to an organisation led by Nosey Pieterse, an ANC cadre, shortly before it fuelled the violent strike on Western Cape farms last year?” Zille wrote in her SA Today newsletter in mid-October.

Zille seems to have been referring to reports in April that the other organisation Pieterse leads, the Black Association of the Wine and Spirits Industry (Bawsi), was receiving funds from the government. Bawsi, the Department of Agriculture told parliament, played a critical role in mobilising the striking workers “towards calmness and constructive engagement with the employers”.

We may have a clearer picture of the strike’s catalysts when an independent research project is released. UCT’s Centre for African Studies and the Surplus People’s Project have been running the project, investigating the causes and leaders of the farm strikes, for much of the year. The report is scheduled to be completed in December.

As the one-year anniversary approaches, BAWUSA alleges that tensions between farmers and farmworkers are increasing. “Emotions are running high in the De Doorns area,” read their most recent press release. “Farmers are being mobilized to prepare themselves and to go on the offensive.” BAWUSA claims that farmers hope to derail the union’s celebrations by organizing their own farmworkers’ march on 30 October. “It is a pity that our celebrations must now be strained but we have no plans to disappoint you,” the union said. “We will be there, waiting for you. Battle ready.”

Farmers say these threats are nothing more than characteristic grandstanding and publicity-seeking from Nosey Pieterse. In communities still shaken by the violence of last year’s unrest, many will be hoping they’re right. DM

Photo: Police fire on demonstrators during a strike by farm workers at De Doorns on the N1 highway, linking Cape Town and Johannesburg, January 9, 2013. REUTERS/Mike Hutchings.