Westonaria mayhem: When the children hit the streets 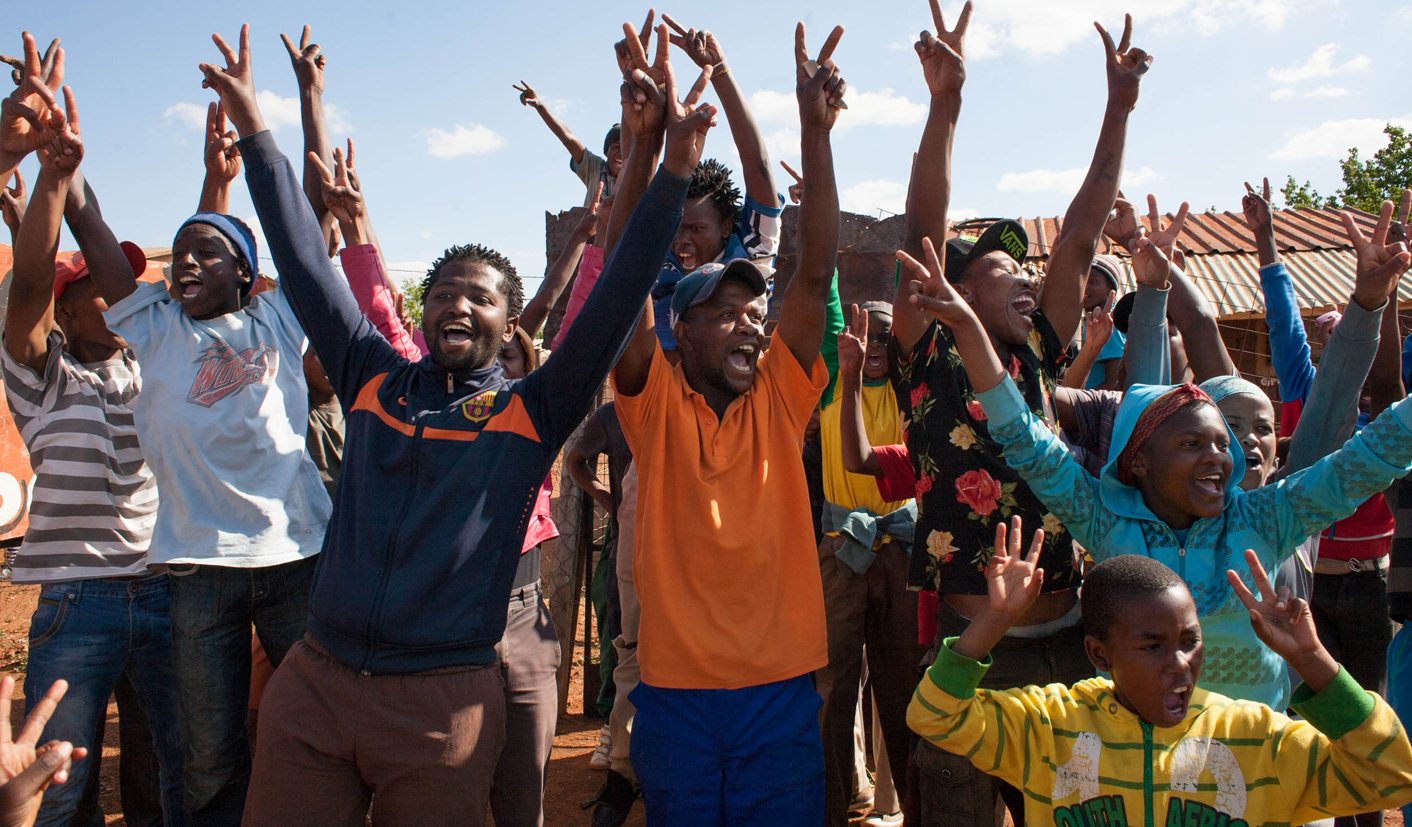 On Thursday, the Bekkersdal service delivery protests spread to other Westonaria townships. Residents complain the municipality has failed to provide services and jobs and the protest continues to intensify, with the death of a 20-year-old on Wednesday. THAPELO LEKGOWA & GREG NICOLSON visited Bekkersdal and Simunye to ask what was going on and why this protest featured so many children.

When Daily Maverick arrived in Bekkersdal, things were quiet. Streets were littered with rocks and barricades against police vehicles. A fire had been lit in the community centre. People milled on the streets but the skirmishes with police had momentarily ceased. The violence in Bekkersdal intensified during the day.

A woman and a child loot a store in Simunye. Photo by Greg Nicolson

But the protest has spread to nearby Simunye, we heard. Residents there had closed the streets and police were passing in nyalas, shooting rubber bullets and teargas. By centimeters, a Daily Maverick correspondent missed being hit with the balls from a teargas canister. That’s nothing out of the ordinary. But what was different about the protests was there, right in front of our eyes: children, so many of them.

A 15-year-old girl, who did not want to be named, told Daily Maverick she was not happy with the protests in Bekkersdal. “Our region has begun with exams and we are missing out.” The girl was afraid she and her classmates would fail. “The protest has nothing to do with our exams. We are looking forward to leaving the grades we are in and choosing subjects for our grade 10, but as things stand now there will be nothing good for us as scholars. All I pray for is for them to let us write our exams in December as it will not happen now.”

Protestors loot a store in Simunye. Other looters at other stores threatened violence if we took their picture, but at this store the looters were not bothered. Photo by Greg Nicolson

“Themba”, a Simunye resident, said, “We are protesting because of lack of service delivery and there is a lot of nepotism and tribalism amongst the administration of the municipality.” He added: “The main demand is for the municipality to be head by young people as the old don’t understand us. We are, though, urging people not to break any property.”

Boys look at the burning community hall in Bekkersdal. Photo by Greg Nicolson

A 23-year-old who did not want his name published said there was a library but no books. The young man who was born in Bekkersdal wants to become writer but there isn’t even Shakespeare, Nelson Mandela’s biography or even a dictionary in the library. “Then you have people, our councillors, they don’t do anything. Bekkersdal was founded in 1945. Since 1945 Apartheid has come and gone. You can’t see much development.” Leaders come to make promises but never keep them, he said. There are too few sport activities available and the rubbish is rarely collected, he added. “We want to make the world green, but how can we make this green if we have no service?”

A young girl struggles to carry the goods she has looted in Simunye. Photo by Thapelo Lekgowa

The 23-year-old is studying in Johannesburg and does not want to live in Bekkersdal when he has children. He will visit, he said, but not live there. The residents want to force the leaders of the municipality to be dissolved and placed under administration. “Once we have a township guy who understands the life of the township, how people live, we will be fine.”

A conversation in Simunye discussed the community’s grievances. “The youth of here can’t work because other people come from outside and take our jobs. We can’t stay forever like this,” said Mohale Lengau, 25. “It’s been a long time. Now it’s time for action.” Lengau claims that the municipality buses workers in from Eastern Cape and ignores local workers. The lack of jobs contributes to crime. “These people, they are smoking nyaope, they are breaking houses,” said Pule Ramaleba, 41. He said the mayor calls the people of Bekkersdal inkwenkwe, a term for those who haven’t been to initiation school and are seen as a boys.

“We want them to step down, all of them, all the structures,” a group of people said when asked what they want to happen. “Or we are not voting. We are not voting… Until we get what we want.”

Children sit in Bekkersdal while the protest continues. Photo by Thapelo Lekgowa

Stores were looted in Simunye, with some perpetrators looking as young as eight years old. Daily Maverick saw two stores being looted. At one, the protestors forced open the security doors and took as much as they could as quickly as possible. Some fought amongst themselves over the goods. Police passed the area multiple times but each time the protestors returned to continue looting when they were gone. A local resident, who watched the affair while shaking his head, said he thought the store was owned by a Pakistani national who evacuated that morning. “They are good people,” he said of the storekeepers.

A boy carries a rock during the protests. Photo by Thapelo Lekgowa

Protestors tried to loot more stores. At around 13:00 hundreds of young protestors, looking school-age, ran to Simunye’s Extension 2, chanting “Lunch! Lunch!” They tried to loot two stores there but a handful of locals in Extension 2 stood at the entrance to the spaza shops and forced the protestors back.

A protestor throws a rock at police in Simunye. Photo by Greg Nicolson

Charles, 19, who didn’t want his surname used, said, “They were going to our shops, leaving their shops there, and coming to our shops to break them.” The shops were defended and locals celebrated by holding two fingers in the air for Extension 2. “We won’t let them break our shops here. They must go and break their shops there.” The locals did, however, join in the protest in other areas.

Not everyone wanted to toyi-toyi. A group of boys, who said they were 18 years old but looked 15, said they were more interested in girls. “We don’t like to protest. What’s to be protested?” they asked.

A looter flees a Simunye store. Photo by Thapelo Lekgowa

“You see our community is much better now,” said one boy. “They fixed the roads and there are parks.” Another boy added that there are clinics and schools.

“We think it’s lunatic,” said a boy of the protestors. “They are vandalising their own infrastructure.” DM