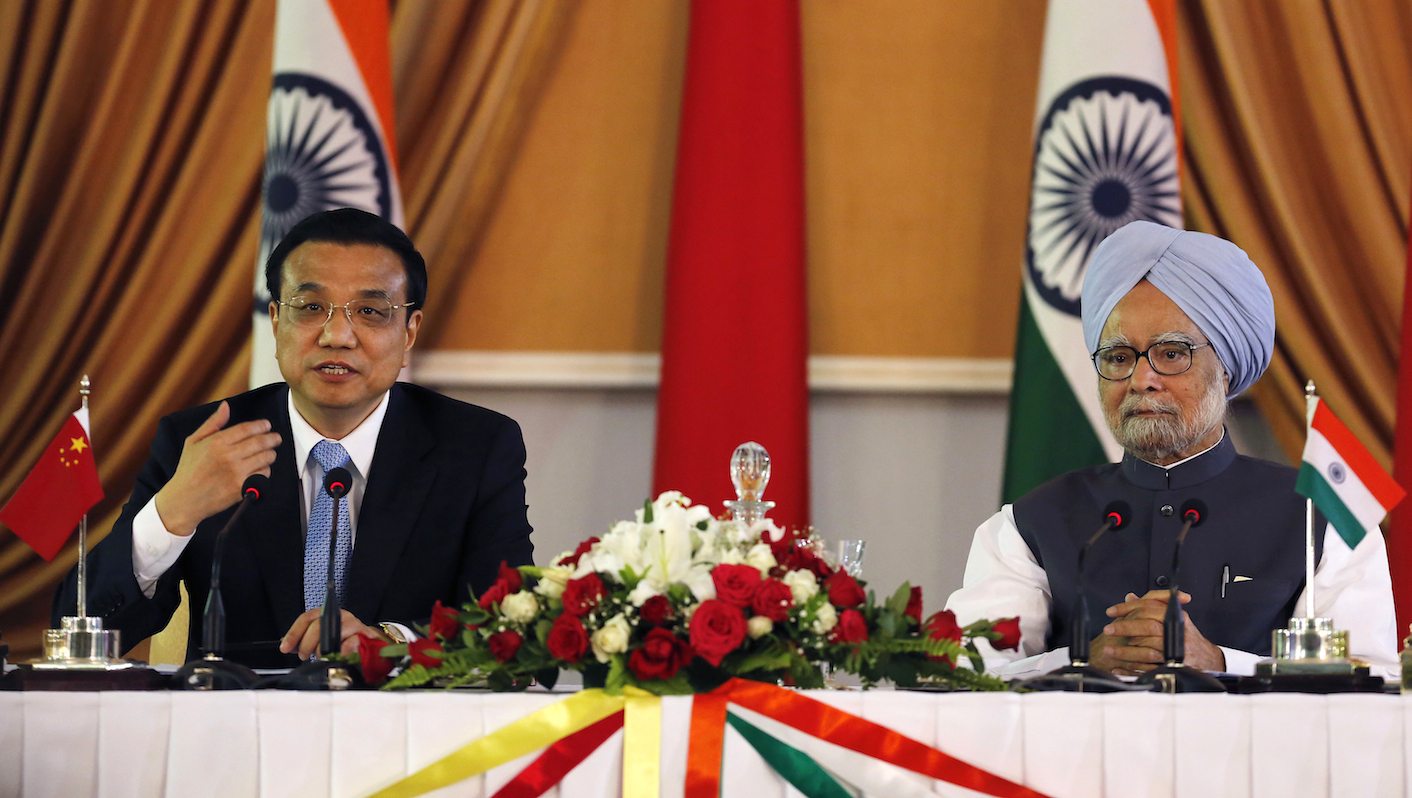 The relationship between China and India has always been rocky, but it’s an important one to get right - after all, between them the two countries host a third of humanity. Fortunately, historical tensions are taking a back seat as both countries realise that encouraging trade is more important than petty border disputes. By SIMON ALLISON.

“India and China are two ancient civilisations. Together we account for 2.5 billion people. And when we shake hands, the world notices.” These were the words of Indian Prime Minister, Manmohan Singh, as he met his Chinese counterpart in Beijing, Premier Li Keqiang. Hands were shaken, agreements signed, and if the world wasn’t paying attention it should have been, because this is big, important news.

It is by no means a given that China and India should co-exist peacefully. In fact, their relationship has historically been fractious, characterized by mutual suspicion and distrust – the inevitable outcome, perhaps, of two ambitious superpowers rubbing up against each other along more than 4,000 kilometres of shared border.

These days, there are three potential flashpoints.

The first is that troublesome border, which is a long line on the map – known as the Line of Actual Control – that doesn’t correspond to any defined physical features. In other words, it’s really hard to know exactly where the border is without sophisticated technology, and patrols from both countries keep accidentally (or not so accidentally) wondering over to the wrong side. In April, a Chinese patrol caused a diplomatic crisis when they crossed over into an area the Indians regard as theirs, and – despite being warned – set up a temporary camp. Delhi was outraged, and the incident nearly scuttled Li’s planned visit to India.

The second is that each country claims a bit of the other as its own. India is still smarting over the loss of the Aksai Chin plateau, which China seized in the brief but bloody 1962 Sino-Indian war and uses as its main land corridor to Tibet. China, meanwhile, wants the Indian state of Arunachal Pradesh, which it refers to in official correspondence as ‘Southern Tibet’.

The third is Tibet itself, and specifically India’s decision to grant safe harbour to the Dalai Lama and his government-in-exile in Dharamsala. Given China’s inordinate sensitivity about anything to do with the Dalai Lama (remember when South Africa was bullied into refusing him a visa?)  this is a constant strain on the relationship between China and India, with China viewing India as undermining their rule in Tibet (which is probably exactly what India was doing when they made the decision to let the Dalai Lama stay). The 1962 war was, in part, a reaction to this, and it’s still a problem.

One example: In 2011, just as tensions were rising over a couple of border incidents, the Dalai Lama gave a series of unexpected public appearances in India, presumably using the anti-China sentiment to push his own cause. China was furious, cancelling high-level talks to register their displeasure and ordering Indian officials not to attend the events.

In recent years, however, the political disagreements have taken a backseat to an astonishing boom in trade between the two countries. In 2000, Sino-Indian trade was worth just $2.9 billion. In 2012, this had risen to nearly $80 billion. With both countries prioritising rapid economic development, these numbers have become far more important than a few icy patches of land somewhere on top of the Himalayas – as Premier Li as much as admitted on Wednesday.

“China and India are two old civilizations,” he said. “Our two peoples have the wisdom and our two governments have the ability to manage our differences along the border so that it won’t affect the overall interests of our bilateral relations.”

In that spirit, the two leaders signed a significant deal aimed at soothing border tensions, with detailed protocols on what kind of military activity is permitted in sensitive areas. There are plans to initiate regular meetings between the border personnel at designated crossing points, and maybe even establish a hotline linking the two countries’ militaries, all moves designed to limit the chance of minor miscommunications blowing up into full-on military or diplomatic incidents.

On trade, Singh and Li had less success. India is running a heft trade deficit with China (over $25 billion) which it is struggling to overcome, and Singh was therefore resistant to Chinese proposals to relax visa regimes and start thinking about some kind of free trade agreement (FTA). “I must be honest that there is a great deal of concern in our industry, given the large and growing deficit in our trade with China,” said Singh in an interview with Chinese media. “When conditions are more propitious and trade is more even, we will find it more feasible to discuss an RTA [regional trade agreement] or FTA between our countries.”

Mission accomplished for both sides, both leaders left the talks for a lavish banquet hosted by President Xi Jinping – a rare honour for a visiting dignitary, and another sign of China’s growing respect for India. In case you were wondering, the menu included stir-fried lobster, codfish in Sichuan sauce and crispy duck rolls (just a pity Manmohan Singh is a vegetarian).

Overall, Singh’s trip to Beijing was a success, and looks likely to signal an era of improved ties between the two most populous countries in the world. Long may it continue. DM