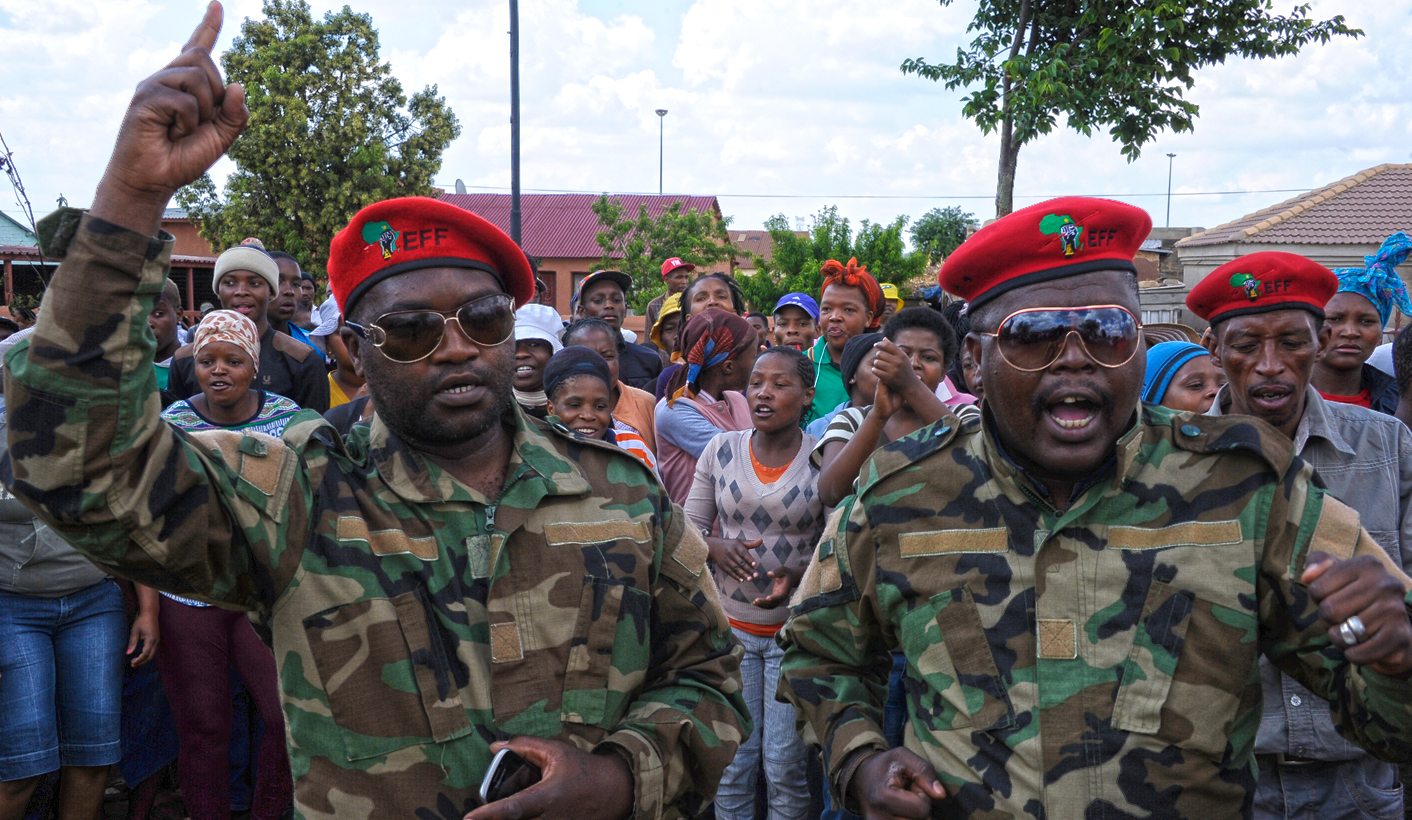 Shots were fired, tempers flared and comrade turned against comrade as tension was high in Bekkersdal near Westonaria, the scene of violent service-delivery protests. Buoyed by a potential visit by EFF leader, Julius Malema, young residents this week voiced their anger and frustration and took to the streets. By THAPELO LEKGOWA and BHEKI C. SIMELANE.

Expectations were running high as young residents marched, chanted, sang struggle songs and barricaded streets in the township with rocks and other debris this week.

Bekkersdal has been the scene of recent, ongoing violent clashes between police, community members and ANC members who would like to see the municipality disbanded.

But Malema’s much-anticipated visit was cancelled as the EFF leader was off writing exams. Instead, an EFF message of support was delivered by the party’s Gauteng spokesperson, Patrick Sindane.

Addressing a large crowd, Sindane urged residents to “fight for water, electricity and housing, but most of all fight for the land where those will be placed. Nothing without the land,” he told those gathered.

The situation in Bekkersdal has been tense and volatile for some time and one community leader, Thabang Wesi, accused “foreign” shop owners of “colluding with the forces against the community” and of sponsoring these alleged forces with weapons used to attack leaders of the Bekkersdal Concerned Residents Association.

“These people [foreign shop owners] should leave our township, in fact they should leave our country,” Wetsi addressed the community. The statement followed an incident during which a Somali shop owner allegedly opened fire on protestors, fearing they would loot his shop.

As the meeting proceeded, reports were received that protesters had been shot at by Councillor Khaya “Miya” Ncele. Ncele denied the accusation.

“I don’t even own a gun,” Ncele told the Daily Maverick. “The last time I had a gun in my hand was in the year 2000, and since then I have never used a firearm. It was my colleague Mngomezulu who fired two warning shots with his legal firearm.”

Councillor Thabane Mngomezulu later arrived at the Bekkersdal police station wanting to clarify what had occurred and to talk to the media. He confirmed that he had fired two warning shots into the ground as a crowd approached him. He had gone to the police station, as the law required, to report the fact that he had discharged his legal firearm, he said.

He said his home had been petrol-bombed but that no one had been injured and that no serious damage had been caused. He stated that he was prepared to “put his body on the line” to protect the ANC-led government and that he knew who it was in the ANC that was “encouraging” the protests.

Katlego Boijang, a protester who said he had witnessed the shooting and had been intimidated by Councillors Ncele and Mngomezulu, tried to lay a charge of intimidation with police but was told there was insufficient evidence. Boijang is adamant that Mngomezulu shot at the crowd and not the ground.

The local police commander said people were free to lay charges, while many community members are of the opinion that police are shielding political leaders in the area.

Mngomezulu, on the other hand, accused some ANC comrades of “selling out”.

“We are disappointed at the ANC comrades who are selling us out, but rest assured we will deal with them when all the chaos ends,” Mngomezulu warned.

He added that he did not believe the community’s wish to have the council placed under administration would succeed, and threatened to approach “the highest courts in the land” if need be.

Some of the complaints that emerged from yesterday’s meetings are that nepotism is rife and that scholarships intended to benefit the community were instead awarded to the friends and relatives of officials.

Protesters blamed Mayor Nonkoliso Tundzi for the situation and called for her resignation. Many community members are furious at the leadership in the area, which they described as “generally disrespectful”.

It seems that matters in Bekkersdal are far from being settled and are likely to continue as long as tensions are not resolved. Police confirmed that at least two people were admitted to the local clinic, one with bullet wounds and another with an injury caused by a machete.

Some of the stock from foreign-owned shops was being kept near the police who had set up an operation centre at the entrance of the township.

For now the Bekkersdal protestors are determined to continue and intensify their protests if demands are not met.

“We will only respect funerals over the weekend, but besides that, it will go on,” a protester said. DM

All photos by Thapelo Lekgowa.