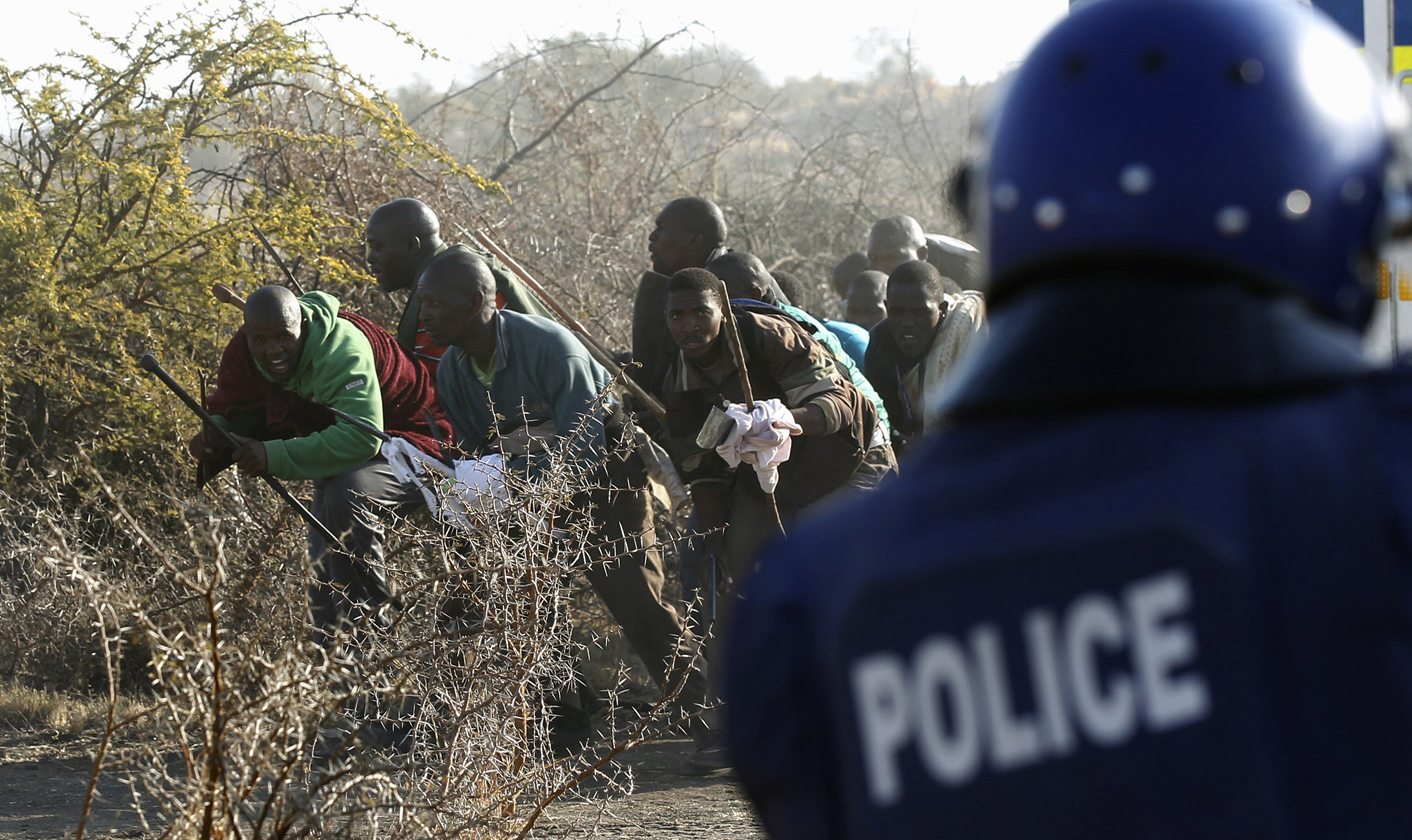 The Marikana Commission of Inquiry resumes today after recent evidence shows the police have been withholding or hiding information. To find out who is responsible, it’s crucial to understand the decision-making process that led to the rolling out of the tactical phase, but the SAPS failed to provide the full minutes from the joint operations centre (JOC). Those minutes, previously hidden, are now available. The police version of events is slowly unravelling, but we are still to understand who put pressure on the police to confront the protestors, despite the obvious risks. By GREG NICOLSON.

At a meeting held on the evening of 15 August 2012, top police brass endorsed a plan to crack down on the striking mineworkers in Marikana. “After deliberations the meeting endorsed the proposal to disarm the protesting and further indicated that additional resources must be made available on need identification by the Prov Comm; North West,” reads the resolution from the extraordinary meeting. Around the table were the country’s top cops. The national commissioner, all provincial commissioners, the division commissioner of operational response services, the deputy national commissioner, and the acting divisional commissioner of crime intelligence were there.

The meeting’s agenda forms part of the evidence that has been presented to the Marikana Commission of Inquiry where the official SAPS version of events is slowly unravelling as officers offer up more information to protect themselves and avoid taking responsibility for their commanders over the death of the 34 mineworkers.

In the original minutes from the joint operations centre (JOC), which were seen for the first time recently at the Commission, the entry on the 16th begins at 06:00 under the ominous heading “D-Day”. There’s an emphasis on progressing with the six-stage plan and beginning stage two, a show of force. “They must see it’s stopping here and now. SAPS not retreating. Agreement. Everything to be done on command. Today things will be changed,” read the minutes, using the language of finality.

At 15:30 police plan to implement phase three of their plan, raising the chance of confrontation. “Take back invironment [sic],” say the JOC minutes from a 13:30 meeting. Lieutenant Colonel Duncan Scott, who is currently being cross-examined at the Commission, then went into the field to brief offices, reportedly from his laptop and a Google Maps diagram. Shortly after, the next JOC minutes start recording the deaths. “30 scen[e] 4 hospital 45 injured”.

The minutes are full of notes scribbled across dozens of pages – who attended what meetings at what time, what was said, the phone numbers of the officers involved, how many officers and vehicles from each unit would be deployed in what stage of the plan. On 18 August, police commanders commended the troops and said the media had been blown away by the transparency shown from the cops.

Ironically, only a fraction of the JOC minutes were handed over to the Commission. In the days after the shootings, the Independent Police Investigative Directorate (IPID) requested minutes of certain meetings. Those were handed over, watered down and lacking the forceful language of the originals. Most of the minutes were withheld. While the police were meeting at Potchefstroom to debrief on Marikana, files were created for the minutes for each day, suggesting the police knew they would need to provide something, but most of them were left as blank files without any of the original information. Where minutes were submitted, the police copied the stuff that fit their version of events while excluding the stuff that showed a relentless ambition to close down the protest regardless of the circumstances and consequences.

On Monday, documentary filmmaker and member of the Marikana Support Campaign Rehad Desai, who is making a documentary called Miners Shot Down, made headlines for revealing footage of the moments before the shootings started at Marikana. The video matches other clips seen from Al Jazeera’s camera and Desai points out Tactical Response Team (TRT) members who before the shootings hold pistols in hand and cock them.

Sources say the Commission has had the video for some time and doubt the cocking of the weapons will have much impact. The TRT were only supposed to be utilised in the plan only if the frontline units were in danger and the video suggests they were ordered to be ready, suggesting they may have had cause to prepare their weapons.

What the video does show is that the miners initially left the koppie in a peaceful manner and for the informal settlement of Nkaneng. Police have argued that the miners, murderous and crazed on muti, instigated the violence. The group of protesters, however, only got angry when police started engaging them with rubber bullets from the side, after the SAPS blocked the path to Nkaneng. A line of police vehicles diverted mineworkers who walked alongside with police beginning to fire non-lethal weapons directly at them. [NB: Rubber bullets should always be fired in the direction of the ground in front of protesters’ feet – Ed.]

At the end of the line of police vehicles are members of the TRT who ultimately open fire when they sense the crowd getting dangerous (the video also shows that when confronted by police some protestors brandish weapons such as machetes, and one mineworker uses a handgun to fire on police). The protestors were walking between two kraals, with little option but to end up in front of the TRT, and it’s unknown why police didn’t decide to use their vehicles to block the passage instead of diverting the strikers towards to TRT.

In a comprehensive submission to the Commission, Gary White, an expert in public policing from Northern Ireland, criticises the plan extensively. He expresses surprise that there are no records of questioning the implementation of the tactical phase. Rather than debate the options, police commanders discussed how to implement the plan. The idea was not properly written down, not discussed, didn’t consider other options or the ideal time to implement, and it seems police on the ground were not properly briefed, says White.

He says the police should have expected the likelihood of fatalities (ordering 4,000 rounds of R5 ammunition and mortuary vans suggests they did). “I am very surprised that – given the knowledge that the armed group were unlikely to willingly give up their weapons – no-one questioned the plan to place a long line of TRT members as a ‘protective element’ behind a team of [Public Order Policing] members who would push forward without shields. No-one appears to have asked: ‘Well, if they resist the POPs, does that mean that the TRT will have to use live ammunition?’”

Why were police members so determined to implement the plan, under high-risk circumstances, with little discussion or criticism? Crucially, the minutes of the meetings at the JOC clearly suggest there have been orders from the top that could not have been ignored or questioned. And someone was determined enough to hide those minutes from the Commission.

The inquiry needs to interrogate the links between the high-level meeting and the implementation of the plan on Wednesday. Above that, it needs to question whether and to what degree the country’s top cops were under political pressure from leaders such as Cyril Ramaphosa, who was on Lonmin’s board, and politicians such as Police Minister Nathi Mthethwa.

The Commission resumes today after another adjournment. DM