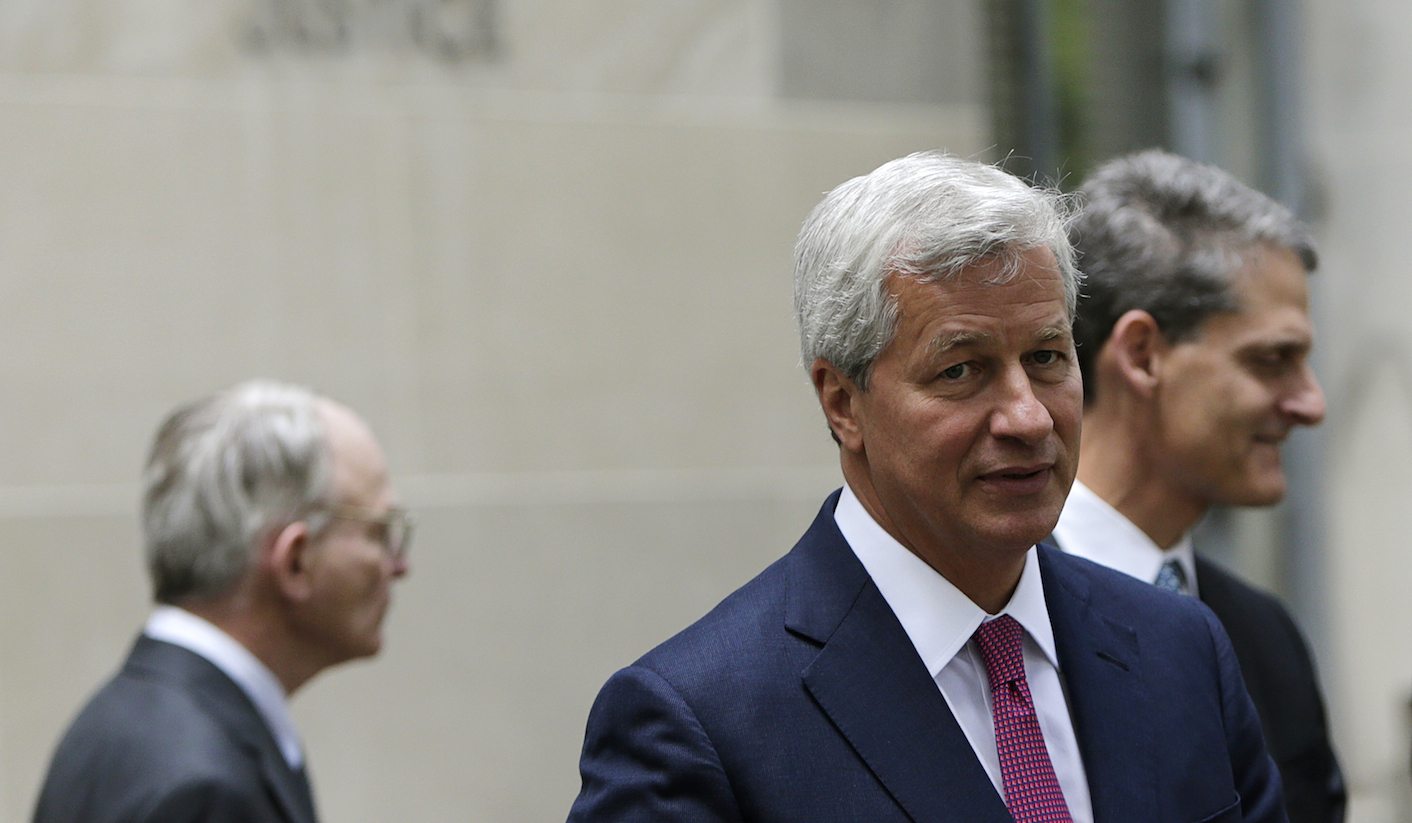 The financial crisis may be long in the rearview mirror, but the suffering has started to hit the very institutions that did so much to bring it about. Last week, the US government wrested two “victories” from all of the carnage. But, as usual, it’s not as simple as all that. By RICHARD POPLAK.

What does a guy have to do to get $13 billion out of JPMorgan Chase’s CEO Jamie Dimon? That’s the question United States Attorney General Eric H. Holder Jr. must have been asking. Despite the fact that the government had the mega-bank over the barrel with regard to its fraudulent behaviour leading up to (and helping to cause) the financial implosion, Dimon and his attack lawyers -uncharacteristically on the defensive – did not want to give out.

At issue, of course, were the rancid mortgage backed securities that JPMorgan shoveled into the gaping maw of idiot investors the world over. The Justice Department wanted JPMorgan to come clean on their involvement in the biggest financial scam in the history of humanity, and it wanted the bank to pay handsomely for the pleasure. Dimon was okay with paying – in fact, he generously offered between one and three billion – but he did not want to admit liability, which would open the bank’s vaults for enraged shareholders who got triply screwed in the deal. No, this would clearly cost JPMorgan a lot more than a slap on the wrist; Holder wanted the deal to hurt.

By all accounts, Dimon – who maintains the support of his board even though the embattled bank is fighting more civil, state and federal suits than former heads of the ANCYL – has had a hand on the till in the negotiations. On September 24, Dimon personally called one of Holder’s shock troops, and informed the Justice Department that he wanted to do a deal. There were several sticking points. The first, and most obvious, was the size of the settlement. The second, no less important as far as the bank was concerned, was an admission of liability. The third was a suit that the State of California was bringing against the bank, again with regard to their mortgage securities.

Another sticking point was the involvement of Bear Sterns and Washington Mutual, institutions that JPMorgan bought (with US government help, mind) during the financial crisis, not before it. JPMorgan argued that they shouldn’t be held liable for the activities of acquisitions post fact – a rather weak position when one takes into account how lucrative the taxpayer-underwritten purchases have been for the bank. The Justice Department, to their credit, wasn’t buying that argument. Nor would they negotiate terminating the California case. And they wanted lots and lots of money, some of it in the form of relief to customers holding garbage mortgages.

Last Friday, the bank and the Justice Department came to a tentative agreement: $13 billion dollars, and no break from the California case. There are critics claiming that this is far too high a penalty – it represents half of JPMorgan’s profits for 2012, and will certainly hurt blameless shareholders. But Washington had to show some moxy on this case, and moxy they have most certainly shown. Whether it is a case of too little too late, or overreaching and exploiting an easy target – consensus has not yet been reached. But to the outsider, despite its outlandish profits of late, JPMorgan under Dimon has looked like a 1980s building society ran by less gifted members of the Nat establishment.

Let’s take, for instance, the debacle that unfolded in London last year, where $6 billion went errant after a series of botched trades. The bank is still on the hook for those losses, and faces lawsuits in the UK. In China, the bank showed itself to be particularly unsubtle in the hiring of princelings and the children of hyper-connected CCP mandarins – all of which is illegal, if small beer compared to the billions on hook in the mortgage derivatives debacle.

And while nothing is quite settled yet, it does look as if another Wall Street poobah, the eminently rotten Steven A. Cohen of SAC Capital, is soon to go down. SAC routinely flouted insider trader regulations in amassing way-too-good to be true profits for its hedge fund investors – an astonishing 25% returns since inception. Several of its traders are awaiting trial, and are certainly going to suggest that Cohen knew about their illicit activities. In fact, SAC’s filthiness was one of the louder, most discussed “secrets” on Wall Street, and it’s something of a wonder that Cohen has managed to hold out this long.

The Securities and Exchange Commission is looking to free SAC of about $1 billion in fines, and an admission of guilt – a record-breaking fine in a case like this. Outside investors have for the most part run screaming from SAC, and the fund is left managing Cohen’s estimated $6 billion piggybank. Times have gotten so tough that Cohen is offloading pieces from his prodigious art collection – two Warhols and a Gerhard Richter are about to go on the block, expected to fetch over $30 million. Indeed, Cohen may be forced to turn to art sales, given that the SEC settlement may see him banned from managing other people’s money.

So we are left with a question: does last week represent an emboldened Washington trying to redress the wrongs of Big Capital, who have scammed and cheated their way to immense wealth and showed scant regard for the financial system that allowed them to do so? Or are these a couple of small, symbolic gestures designed to make us plebs feel better about ourselves? There is no doubt that the settlements, particularly with regard to SAC, have sent a warning to Wall Street, but whether the warning resonates is a different issue. Dimon is still riding high, and while Cohen’s legacy has been destroyed, he still sits on almost unimaginable wealth. Band aids to stop a howitzer wound. But given that this is all the 99% can expect, we might as well rejoice in it. If only we could afford the champagne…DM